I’m a sucker for a good movie weapon… especially when it’s put to use effectively (Which being Hollywood films they often are!)

From Martin Riggs outstanding feats of marksmanship with his Beretta 92FS, The only person I’ve seen shoot this good with a Beretta is Milspec Mojo… (well worth a look at his shooting drills) to Corporal Hick’s squad of USCM grunts with their M41A Pulse Rifles, (Seemingly effective weapons at close range with that beastly rate of fire but the gun geek in me always wondered how you fit 95 x 10mm caseless rounds in a magazine less than 6″ long…)

So, when Lone Survivor (The book) came along, I read through the pages and studied meticulously the weapons used by these elite soldiers… not a massive amount of information was given but there was a reference picture of a couple of the team shooting what looked like an M16 in a sniping configuration, after a bit of research these were found to be Mk12 Mod 1 SPR Marksman Rifles. I’d seen the Mod 0 before in ARMA: Armed Assault and ARMA II, Which also happens to be one of my favourite games of all time.

Fast forward on a couple of years and the Movie “Lone Survivor” is released… The Mk12 is back in fashion and every man and his dog is RAID modding their woodland BDUs and sticking a big ass scope on their M4. After seeing an article in Airsoft International written by Ben Webb on how to create a TM Recoil based Mk12 (Including the all important barrel modification) I decided that I’d have to take the plunge. Whereas Bens Mk12 was a faithful recreation of the weapon used by Marcus Luttrell (Mark Whalberg) with a full stock conversion, I already had a plan to create the perfect dual upper set up with one set up as a Mk18 CQB platform and the other, A Mk12 for use as a DMR. This all hinged upon a few key factors… Most importantly I wanted to keep the change between Mk18 and Mk12 as simple as possible. 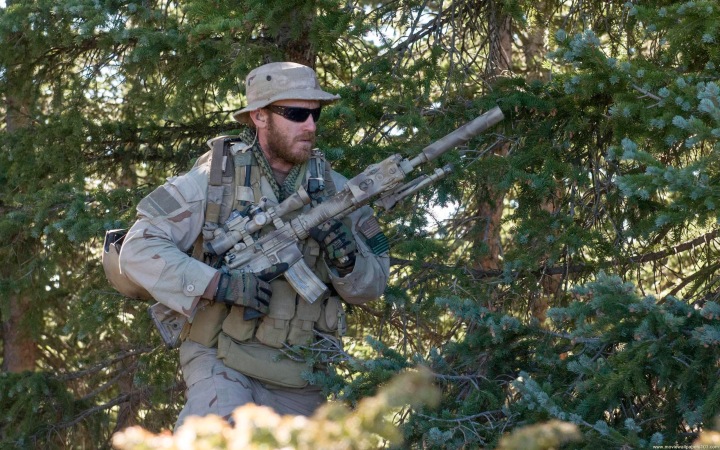 Using a full bore cylinder in the lower I’d be relying on the different uppers to provide a sub 350 FPS on the Mk18 and hopefully somewhere near 400 FPS with the Mk12, with a semi only lock achieved using the BTC Spectre MOSFET. (Not strictly a mechanical lock but pretty much the best way of turning a recoil semi only)

The other was retaining the M4 crane stock housing the lipo battery. A fixed stock would have meant that I’d struggle to use this for CQB, plus the Mk18 would look very strange indeed with a full stock. 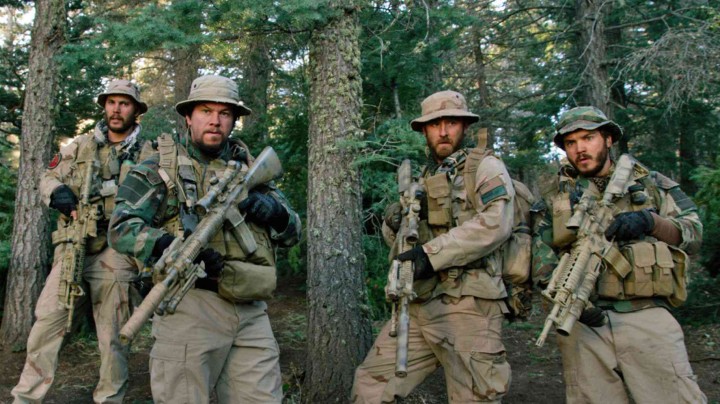 It had to be Axe’s Mk18 from the movie… this had everything I wanted and looked pretty badass, from the Crane Stock to the Docter sight perched on top of the Leupold MR/T scope it was an interesting looking rifle. Add that to how the rifle was designed to be used, as an effective long range rifle able to put down effective and regular fire with the ability to take my team mates M4 mags and I was hooked on the idea… I’m generally a fan of controlled accurate shots over weight of fire, a DMR would potentially be a great asset to the armoury.

So once a spare upper was sourced I started to look at the build list, Starting in no particular order;

A real Mk12 Mod 1 isn’t just an M4 or M16 with a scope on it and a fancy rail… it’s a custom built weapon, to get this right I’d need as many of the above items to ensure a “movie correct” build.

I managed to find a D-Boys Mod 1 front end set on EBay, poorly described and on page 12 of generic Airsoft items I added it to cart… this was closely followed by a Madbull low profile gas block to correct the inaccurate Mod 0 type supplied with the D-Boys set. After this I sourced a set of KAC type irons from a local seller, AN/PEQ 2 battery box (next time I’d suggest a G&P unit or even a real PEQ as the battery boxes are laughably massive) and a Harris bipod with rail mount (Again from Ebay)

The harder to find items were the scope, rings and suppressor. I already had the Docter sight and I’d consigned myself to never having the Hogue grip as they were only available for AEGs via one discontinued brand (Toy Soldier)

The scope I settled on was a clone Leupold M3 Mk4, whilst not the correct MR/T, It would have to do… to my knowledge there isn’t a decent replica of this particular model and a real one would cost more than the rifle it was going on. This was ordered from (you guessed it) Ebay and arrived with some pretty convincing trades and a great all round performance in terms of clarity and eye relief.

I pushed on with the build and after a whole evenings frustrating work with a file and a fair amount of swearing I managed to get the barrel fitted, with arguably the hard part done I started to have a replica that resembled the Mk12 I coveted so much… 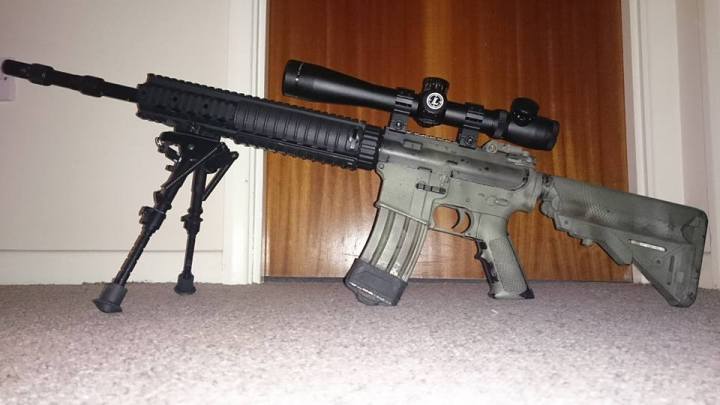 The finer incorrect details were the ones that bothered me the most… I got over the scope issue quick enough but I absolutely needed to get those rings. I searched high and low, unable to find the right rings in the UK I started to look further afield.. close to ordering a set of genuine rings from the US for £250 I somehow again stumbled upon a reasonable looking set from Taiwangun.com… although here were a few things that didn’t quite marry up to the rings I wanted, for starters these were mid height whereas I specifically wanted high rings to get the right look. Also the rail section on top was too long and needed cutting to get the same look as in the movie (I’ve got pictures of the rifle before and after I made this alteration, seen below as before the cut… Also you can see the CQD type sling plate as seen on the movie weapon, luckily the TM Recoil DEVGRU 416 comes with a suitable plate so in the cart it went.

And after the top rail had been cut down… 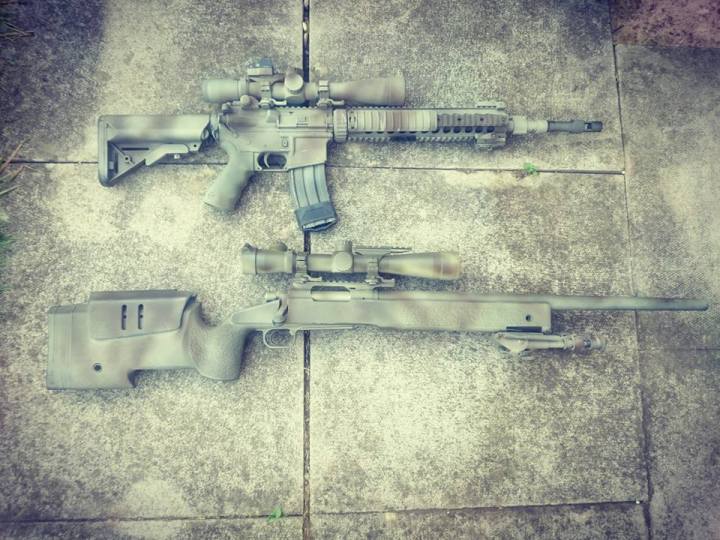 I however decided that I didn’t like it and promptly sold it on to a guy who I believe now has it furnishing his L119A2 build.

The other little things that bugged me were the Docter sight mount… my good looking clone came with a thumb wheel commonly seen on real sights, the one in the movie had a weird offset dual bolt set up, I was thinking that this was some strange custom made mount for SEALs Mk12s, in reality it was far simpler… An NC Star Red dot sight used as a stand in for the far more expensive Docter in the scenes where the rifle is bounced down the mountain, in fact most of the non firing scenes use a rubber prop rifle as this cuts down on production costs and means that an actor can safely wield a replica without the Technical Director or Armourer screaming about him being muzzle flagged every 30 seconds. 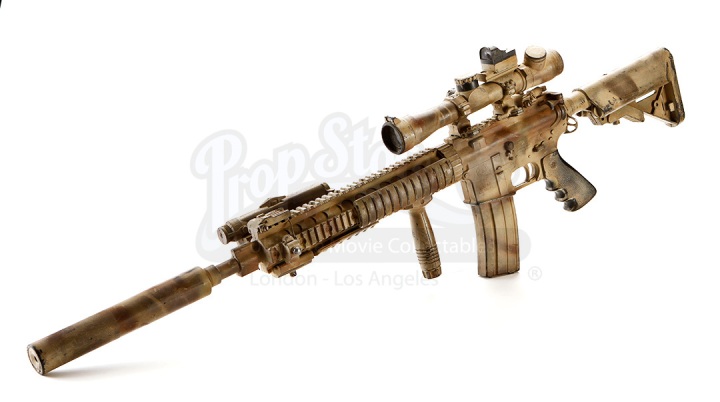 I never did get around to buying an NC Star Red Dot… I stuck with the Docter and used a touch of artistic licence. Another item I never received whilst I owned the rifle was the Hogue type grip… on the day I sent off the Mk12 upper I managed to spot one going for £50, and jumped on it quicker than a Seagull on chips.

I did manage to find a suitable suppressor… Z Airsoft made a very convincing OPS 12th suppressor with the correct threads to engage into the D Boys muzzle break. RedWolf HK were able to source this for me and it arrived from Hong Hong along with a Marushin Colt Anaconda that happened to jump into my basket within a matter of a week or so. 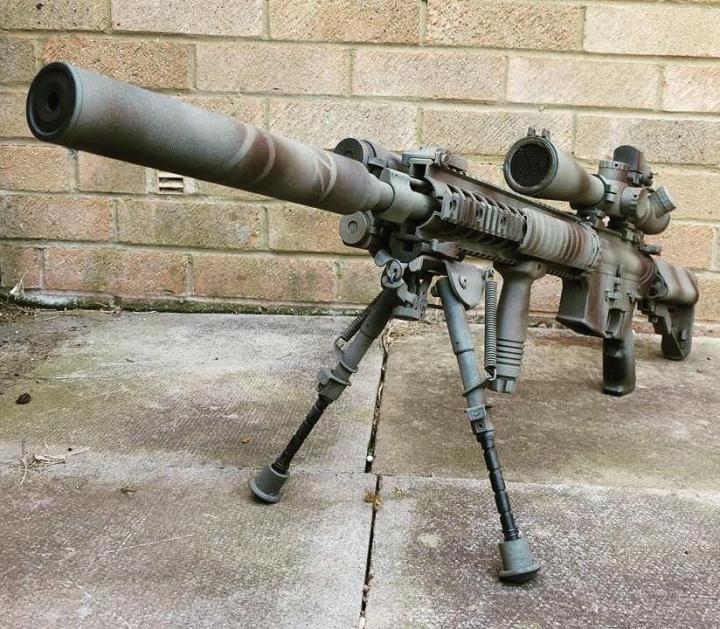 Once all the parts were put on I looked at how to create the visual look of the rifle in the film, using a mixture of reverse stencils and random spraying I created what in my opinion is a passable attempt at the same camouflage seen on the movie weapon, although I did tone mine a little more green for UK woodland.

The build took me 4 months from ordering the rail to putting in the final touches, I never fully completed it and I see more of the errors than the things I got right, however it’s the one replica people always want to talk about. I’m extremely proud of the work I put into this build and I’d love to build another, although this time I’d probably stay away from a straight up movie clone and I’d potentially go down the GBBR route as there is a full kit available and it looks sexy as hell (I’ve actually had a pop with this with one of the Diablo guys who had a TM MWS Mk12) 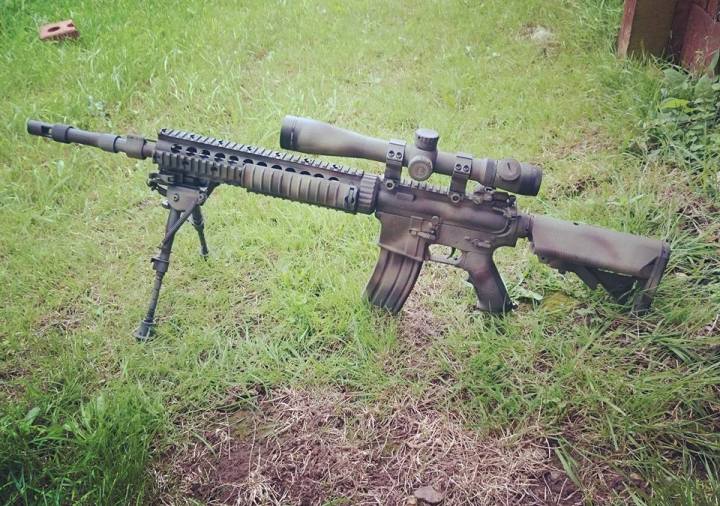 Also worthy of note, one of the guys I regularly play alongside (Red Troop team mate Cephiro) has built an exceptional Mk12 using the Dytac barrel and an LC Engineering full stock kit, the balance is better with a full stock and as a standalone platform it won’t have any of the drawbacks I encountered trying to make 2 weapons out of one. This is ultimately why it got sold, I never managed to get a massive increase in range over the Mk18 upper and therefore the weight just didn’t make it worthwhile. Having spoken with the new owner he’s more happy with it than I ever was, and now he’s the owner of a pretty rare replica. As tempting as it would be to make another, it’s a very expensive undertaking and I’d estimate the complete package at £1400 including the stock TM SOPMOD Recoil and the few internal upgrades I’d put inside. I wasn’t the first to make one, I certainly won’t be the last.. but for a brief moment in time I was part of a small group who had a recoil Mk12.

If your ever looking to build one and get it closer to Axe’s than my build then please don’t hesitate to contact me, I’ve got little nuggets of knowledge that could possibly help and ironically now know where to find a few of those hard to find bits. 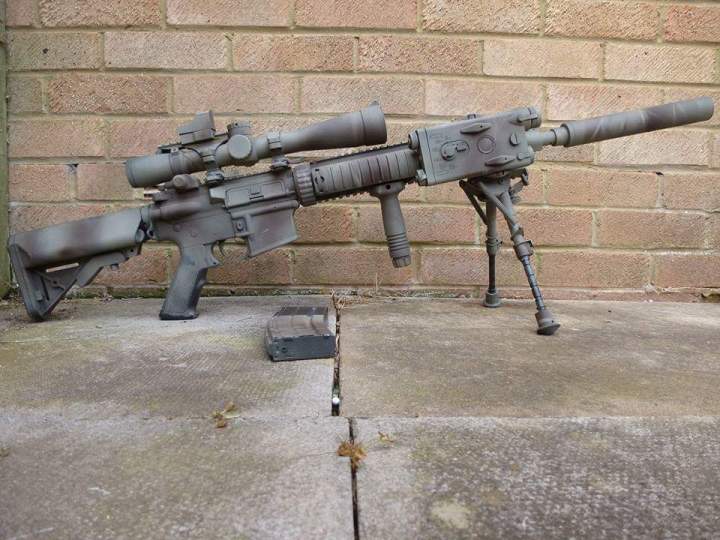 One thought on “Anatomy of a Shooter: MK12 Mod 1 Recoil Shock (Axe’s SPR)”