Being left handed often presents a few challenges, especially when using stuff designed for the other 90% of the population. Most of which, we simply deal with in our own ways… However when an opportunity presents itself to gain Ambidextrous controls into an otherwise right handed weapon, we southpaws will jump at the chance!

With this in mind, I ordered a few Angry Gun components from ehobbyasia to bring that functionality to my MWS CQBR, Having heard great things about angry gun and having seen some of their work in the past, As far as i saw it… These would be on-spec parts that would just require careful installation.

I’ll be going through each and every part I’ve ordered, but the first bit we’re going to look at is the selector…

So, for those who haven’t had the pleasure of stripping an MWS GBBR, The removal of an MWS selector is as simple as cocking the weapon, Rotating the selector to a 45 degree angle between full and semi auto and then pushing from the right side until the whole selector pops  out about 1/4″, After the initial 1/4″ push you simply rotate the lever until fully “up” and then pull through until released from  the receiver. 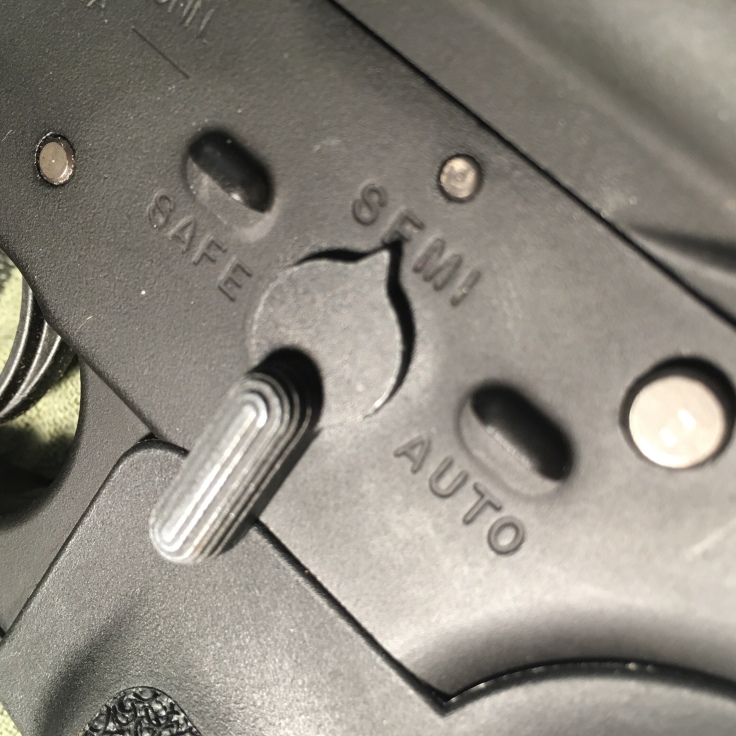 To reinstall the selector (original or aftermarket), Reinsert the selector whilst facing “up” then using a small screw driver or similar to push the trigger mechanism down (and out the way).

You can then move the selector across (again using something to move the selector retention pin out the way) It’ll then slide back to the 45 degree position and click firmly into place. Job done and works perfectly.

In regards to the AG Selector, It should fit back in the same way… with simply a secondary selector lever on the right hand side to bolt in place (with a small application of loctite to keep it rock solid). Unfortunately a number of issues prevent this from being a simple process, The grub screw holding on the main lever is too long, This then catches in the receiver and prevents the selector from being fully seated. After a little careful filing of the grub screw, I managed to get the selector fitted… But not to my satisfaction… Sliding between Auto and Semi I’ll admit I wasn’t very impressed, there’s a degree of slop not present with the original Marui part.

When it comes to the installation of the Angry gun selector, the first step is to consider deeply whether your willing to potentially write off the cost of the component in getting it to work… The reason for this is that Angry Gun for some unknown reason have not simply copied the internal cam of the original selector but have redesigned it, and very badly so. The cam on the Marui allows a smooth operation with a definitive click in all three positions, The AG selector does not. It fails to engage in safe at all, on the position of Semi-Auto its not a positive click or retention and it only feels at home when in Auto.

And I warn you… there’s some serious work needed to allow this to work as intended (At this stage I’ve not attempted it as I’m awaiting a reply from the retailer). Not what you’d expect when something like this is pretty much integral to the functionality of your replica.

Overall I’m really not impressed, The item fails to deliver on its only required function… to fit and operate the same as the original part (albeit with an additional lever). Add this to the apparent news that no one on the MWS groups has been able to demonstrate a working example out of the box so far, It’s turned into a bitter disappointment and a reminder that Airsoft tolerances are mostly shit and adding “Upgrades” generally reduces performance.

I’ll update you guys with any progress I make if I decide to fettle it to work, but without serious modifications this isn’t going to offer anything apart from headaches and tears.