I’m not a follower of fashion, Outside of Airsoft I’ll wear any old shit. I wear a shirt and tie to work, I’m married and I’ve not got any reason to buy £100 trainers or jeans. I buy mostly from the supermarket because the idea of making a special trip, going into a clothes shop and spending any form of effort or time buying clothes bores the shit out of me.

For Airsoft or the great outdoors however, I’m happy to spend a weeks wages on a jacket, boots or trousers… this is because I know I’ll get the use out of it. I live in a little village in Somerset, one of the most beautiful parts of the country and if I’m honest, I don’t spend enough time exploring it, But when I do head out into the civilised wilderness I like to be wearing something a little more unique from the sea of Arc’Teryx and RAB you see down here, it’s literally like a fashion show… with added cow shit and ponies.

When I am out and about I’ll generally wear Craghoppers or Cheap jeans with a T-Shirt or if ordered to dress “Classy” by the wife I’ll stick on a plaid shirt, but that’s as far as I’ll go.

Whilst having a funny five minutes, largely spurred in by a chat with CryeMeARiver I spotted a pair of Crye Field pants sold by a seller I’ve used before…Who just so happens to be based in Brooklyn, NY… Now it’s probably no coincidence that this guy often has cheap Crye and Drifire stuff for sale, sometimes seconds… But often one offs and mislabled items.

My first encounter with the seller was a Drifire AC shirt, the pockets being of the G3 type and with a standard Crye AC FR 100% Aramid label.

An oddity I’m sure, but in terms of quality it was fine, and for £70 with the tags and in the bag I’m not worried about the label being wrong, It still says Crye and lets be honest… that’s what we look for.

These field pants were exactly what I was looking for, At a price I couldn’t ignore and the exact size and colour I was after…

Ranger Green Crye Precision G3 Field Pants 36R… Now 36″ might make me a fat mess, But having dropped from a 44″ waist just over a year ago I’m happy enough, Yeah they’re snug but this time next year I’ll need a belt to keep them up (Well, That’s the plan).

The only issue with these, and the seller was very up front about it was the iron on label stated these were All Weather Field Pants, But in reality were standard Field Pants made in the 50/50 NyCo ripstop fabric as opposed to the 91% Nylon/9% Spandex of the All Weather Pants. A bit of a recurring theme with the seller, But for half the retail price I’m not complaining.

The Crye Ranger Green is known to be slightly less grey than most others, Although it’s not as overtly olive as your likely to find with cheap copies (The Semapo Ranger Green pants are an extremely close match FYI).

So starting at the bottom… One little thing I’ve never got on with, Especially for more casual use is the draw cords on the bottom of each leg. Now I understand why they’re there and I also appreciate the reason why they decided on cord as opposed to the Velcro on the Combat Pants, But I’m probably going to cut mine out… 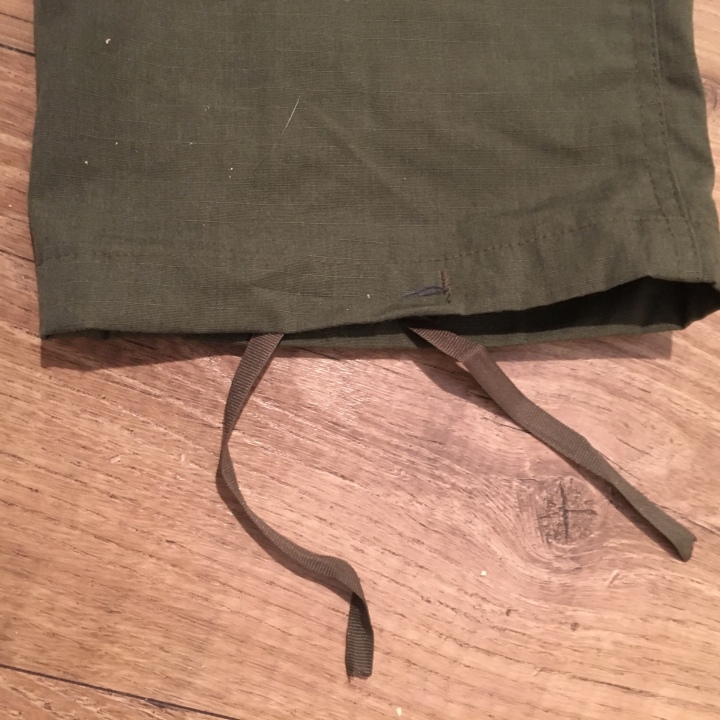 Heading up the leg you’ll find a small(ish) pocket on the outside of each ankle, Usually unused (By me) but fantastically placed if your sat in a vehicle and can’t access any other pockets… There is a little moment in Zero Dark Thirty where one of the assaulters pulls a small breaching charge from the same pocket in his AC Combats… I’m not sure how I’d feel about a few ounces of C4 ready to go boom strapped to my leg flopping around, But Haribo on the other hand… Works for me.

The next stage is the knees… Unlike the G3 Combat Pants, There is no way of adjusting height or cinching the knee in place… Also the knee pads are internal to the pants, Crye produce a version of their airflex pads without the hard cap that is so synonymous with their design specifically for these, I’ll not bother with them to be fair… If I need Knee pads I’ll wear the Combat Pants. The other point to note is the lack of height adjustment although taking away a degree of adjustment does mean that the “Dip Pockets” on the front of the pants are not crowded with toggles and shock cord, allowing that little bit more comfort and room on the front.

The cargo pockets on each thigh are virtually identical to those found on the Combat Pants, An internal elastic “Bottle keeper” is perfectly placed to hold a standard M4 STANAG or anything of a similar size. 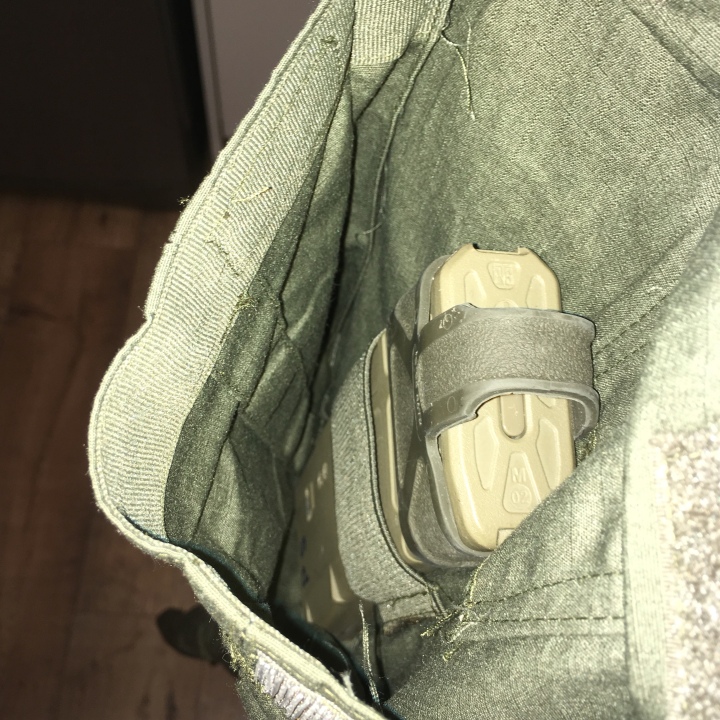 The cargo pocket is TARDIS-like in its size, Canted slightly forwards to allow easier access whilst Sitting or Taking a knee, The overall capacity is so big, I no longer use a dump pouch… I simply dump mags into the pocket and re-index into my chest rig as and when I get a chance. The pockets also feature a knife/flashlight keeper which allows a longer item to be carried outside the top of the flap for quick access. The left pocket distinctly features that all important Crye tag to let people know your not afraid to splash the cash, But maybe a little scared of girls 😂

the other Crye tag sits in the rear seam of the right cargo pocket, rubberised for durability it’s a nice little touch and looks great without being in your face. 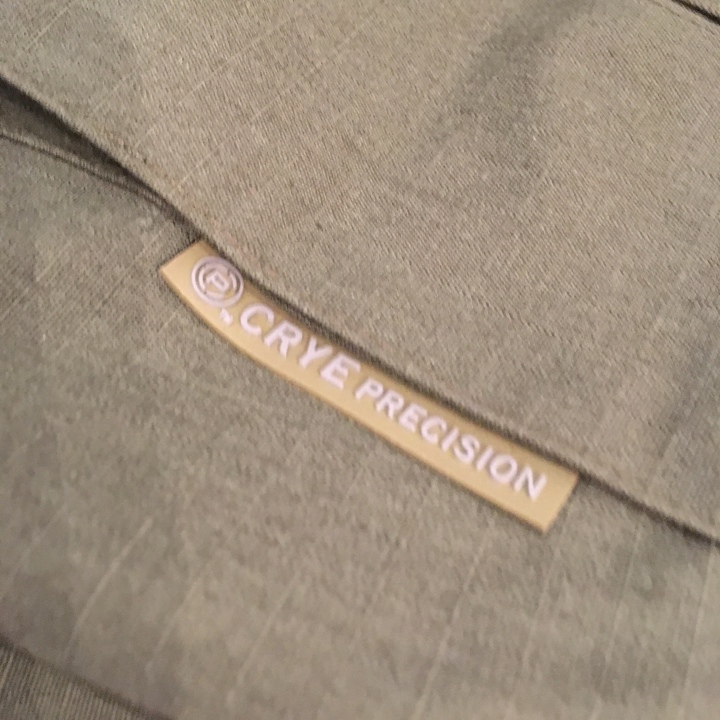 The front “Dip Pockets” are just the right size to carry a couple of TLSFXThermobarics or a couple of pistol mags, Even when full they don’t impede movement or feel bulky.

All the pockets mentioned so far are secured via a pair of Velcro patches, Velcro is great in certain scenarios but if you need security or silence I’d take these to a tailor to have buttons placed in the pockets you wish to be modified.

The rear bum pockets are low profile open top pockets secured by a single square Velcro tab, In general I’m not a big user of rear pockets… I don’t want to put anything in there I’m liable to sit on, however these are better than most… Like the pockets on a good pair of jeans but with the security of a velcro tab.

The final pockets are those on the waist, the so called hand-warmer pockets. These are pretty deep and I’ve yet to lose anything from them. 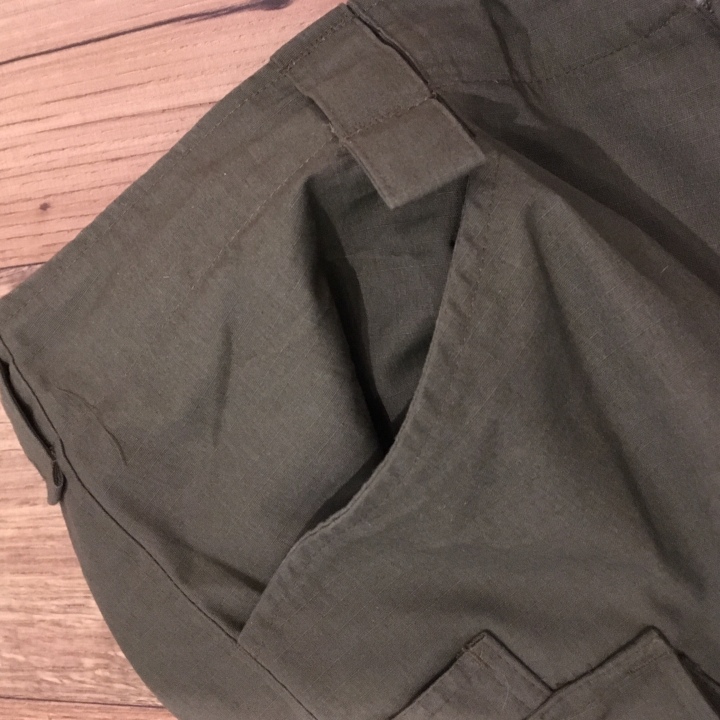 The waist is not padded, An understandable departure from the G3 Combats… There are a total of 6 belt loops, The front two having an additional small loop for a lanyard or key keeper.

The front of the pants feature a YKKzipper with a “no snag” concealed button on the top, I would have preferred a full taped button on the top or even a full button fly… Actually it’s an unusual departure from the American stance of Buttons instead of Zippers for the fly and I’m not sure why they went this way.

The Pants do not feature stretch panels like the G3 Combats, however they’re a generous cut and even though I’m at the limit of their sizing I’ve not felt restricted in my movement whilst wearing them.

The design and cut of the pant overall is very comfortable, you can tell a lot of thought has been put into the design. The shape of the knees and the crotch allows for a massive amount of movement, the pockets also have been given plenty of additional material to allow a massive amount of carriage. The lining of the pockets are exactly the same material as the outer material, seriously hard wearing and resistant to rips and tears.

In fact, Of all of the things taken away from the Combat G3s, The only thing I genuinely miss is the side tabs for waist adjustment… It negates the need for a belt when your on the lesser end of the sizing and in general it works very well. Like all the changes made, I can see why it was done… but the design means I’ll have to wear a belt once I’ve lost a few more pounds.

I’ve been wearing these on my days off, shopping, gardening and walks in the woods. These are civilian enough to get away with in most settings, Definitely something that’s not easily done with the Combat Pants (even minus the pads). They do also have potential for themed games where a less overt look with the adaptable storage could be a massive advantage. 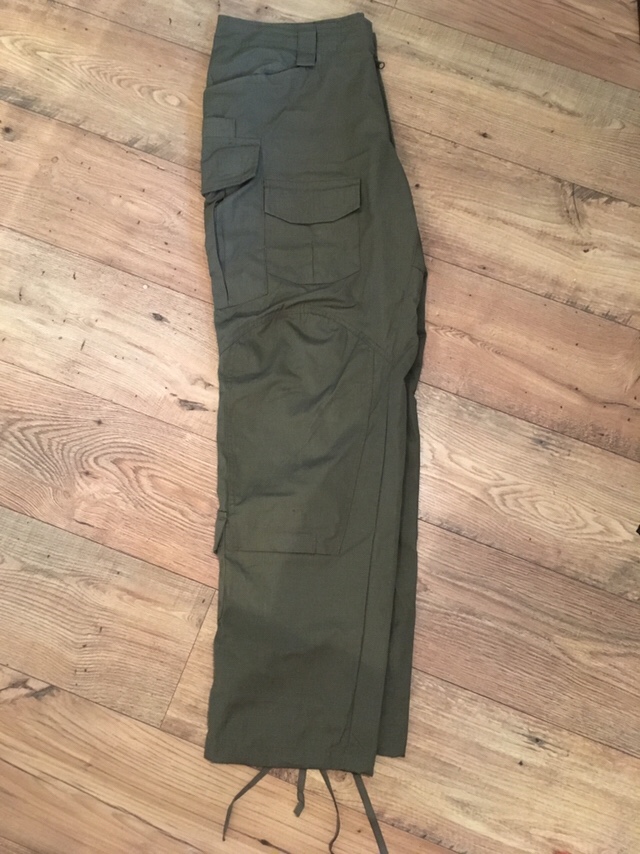 All in all a great pair of casual or out and about cargo pants, certainly not as “Direct Action” focussed as the Combat Pants, But for a weekend game in the woods where your covering a lot of ground then these are a great choice albeit a very expensive option if all your after is basic walking trousers.