Sometimes you just have to say fuck it and jump, Both feet in and no looking back. When it comes to buying gear and replicas I’m sure it’s not just me that feels this way, I’ll procrastinate and think “Is the juice worth the squeeze?”.

Let’s be honest, Genuine tactical gear isn’t cheap for what it is, that’s how it’s able to be copied and sold (with profit) for far less than the original… Sure, there’s the Quality Control aspect to consider, but there are many times you’ve probably thought “How the fuck is that worth that much!?” (I know I certainly have).

Despite our perhaps, Better judgement… There’s a certain desire that cannot be ignored. Like a moth drawn to the flame, sometimes you have to say “Fuck It” and hit Confirm Order.

After my recent adventure with a Repro Haley Strategic Partners (HSP) Style Flatpack made by 101 inc, I genuinely thought I’d go for a cheaper alternative such as the Ops/UR Tactical Elf or perhaps buy a 5.11 Rush 12 and wear it as a more traditional daysack. However, The heart wants what the heart wants and I’m all about the details… 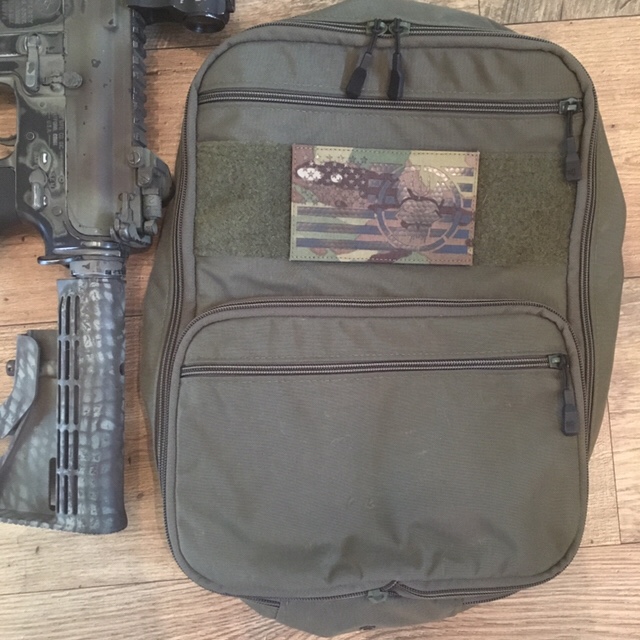 I’d been thinking about a Flatpack for at least 2 years, having a D3CR as my go to chest rig it’s become increasingly more obvious that I need a suitable way of supplementing it’s load carriage ability to include that all important item… Water. Along with this, The Flatpack ticks a lot of other boxes…

With the relatively recent release of the Flatpack Plus it added a few additional benefits (Which I’ll go into in more detail below). It’s certainly not a cheap item. But after trying to kid myself I’d be happy with anything less, I hit that button and waited for the pack I’d wanted for a long time to arrive.

In fact, the only indication of who made it is on a small dragonfly label within the pack itself. I’d not have minded if they’d put on a more visual indicator of the origin, In fact I’d welcome it with open arms. But I guess it’s all a part of the Travis Haley philosophy of #thinkersbeforeshooters or maybe more apt in this case, #functionoverform.

So, why spend more money on the Flatpack Plus than simply buying the original Flatpack? Well I’ll be honest, Haley Strategic themselves haven’t done a massive amount to show potential customers why the plus is a step forward from the original model, Aside from a short video (Link here) featuring the man himself, Travis Haley… it’s hard to find a good comparison video or review between the two.

The biggest change between this and the original is in capacity, The Plus dwarfs the original with an increase in total capacity from 600 to 1400 cubic inches, That’s over double the space! However when compressed, the new Flatpack is only a matter of a few inches larger in each dimension. You’d expect Haley to be shouting from the rooftops about this increase but they’re strangely silent, The fact that the old pack has been discontinued wouldn’t stop most companies trying to sell you their latest model. See below for the difference in size… (Full disclosure, The right hand pack is a clone but is exactly the same dimensions as a genuine Flatpack).

The other major difference is within the bag, the main compartment is lined front and back with loop fields, Designed to be used with a range of inserts that Haley sell, Your also be able to use a number of other manufacturers organisers such as the Blue Force Gear “Dapper” inserts. 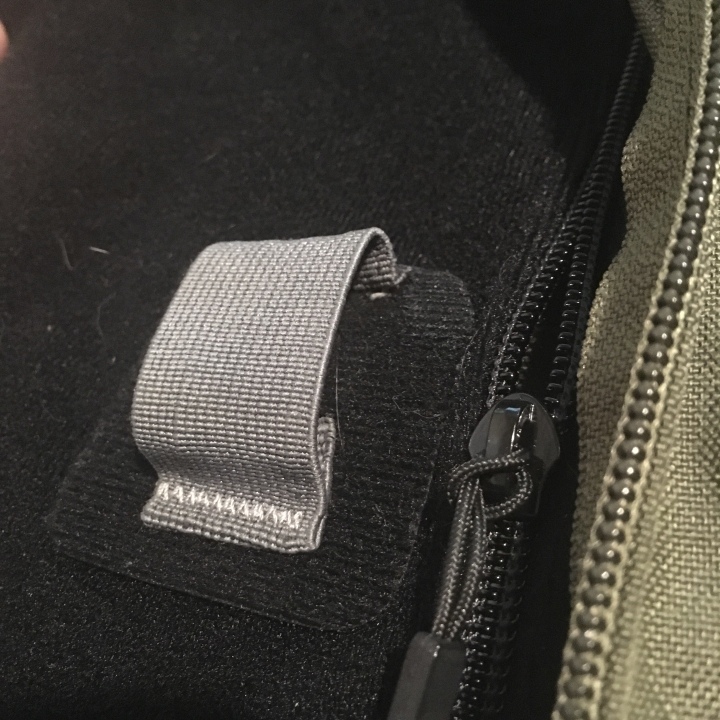 All 8 zipper pulls are “Dragonfly” branded rubberised pulltabs, Maybe this was seen as enough by HSP and prompted the lack of branding elsewhere.

The pulltabs are certainly nice to use, However be careful… I did manage to break one, I don’t think I used undue force when pulling the tab but it did break. It’s not the end of the world, spares are available and indeed you could simply change it to paracord if your looking for an ultra tough solution.

Storage within the pack is in 3 compartments, A main compartment, a Lower smaller compartment which piggybacks the pack and a final low profile compartment accessed via a zipper on the rear of the pack.

The biggest compartment is an expandable rectangle the full height and width of the pack. Opened by a pair of zippers, The pack features a full clamshell design, This is different to the original pack which offered a zip opening only down to the top third of the pack. Yes, There are benefits to a zip that doesn’t go all the way around… It’s hard to lose items in the bag as they won’t fall out easily, However… a full clamshell makes filling and unloading the pack easier, Especially when trying to keep things like jackets and hydration bladders flat. 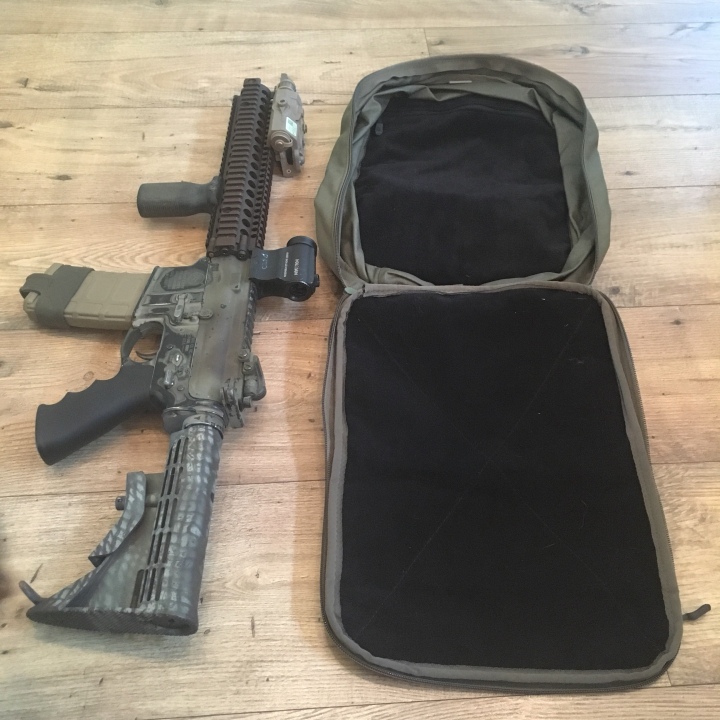 This main compartment also has a zipped divider, inside of which is room for a hydration bladder, complete with a concealed flap for the hose and a velcro strap for securing the top of your bladder. At the very bottom sits a drainage eyelet, I can confirm it works… On my first outing with it, I discovered my cat had destroyed my Source bladders integrity… 3 litres of water pouring down my back as I’m making a shit joke about making sure there’s no holes in hydration packs… That’s one way to look stupid 😂 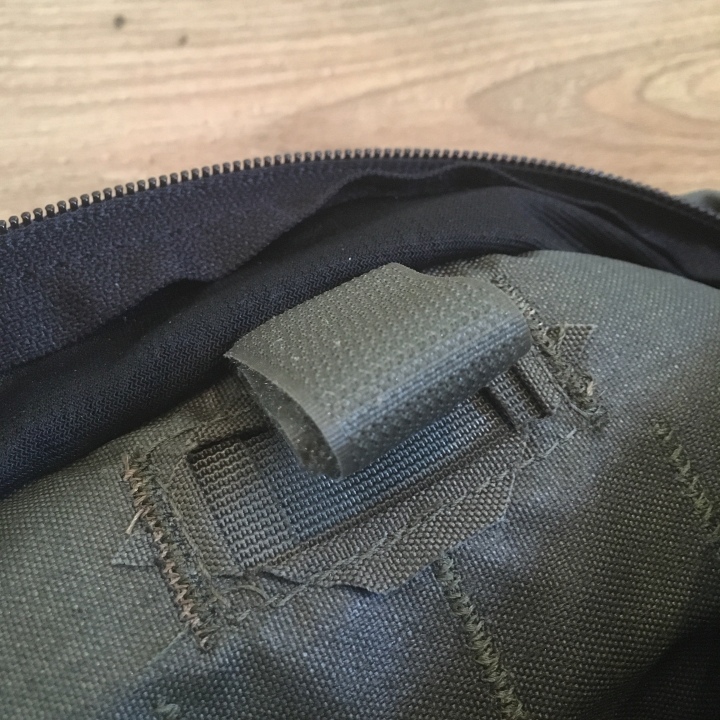 The expansion of the pack is enabled via a wraparound zip which retains a gusset of fabric all the way around both the main and secondary compartments. One of the great things about this design is its simplicity and ability to load up the pack and then squeeze the whole pack down, Virtually eliminating any wasted space.

The same expansion is given to the smaller “piggyback” compartment on the lower rear of the pack, This section in itself is large enough to accommodate a pair of 500ml water bottles, a brace of 5.56 magazines or indeed a whole host of useful items.

The final compartment, the one that often gets overlooked is the low profile, full length zipper pocket that nestled between the rear of the pack and the main compartment. Big enough for A4 sized documents, At a push you could even squeeze in an ultralight jacket.

The straps themselves are on the simple side, a straightforward section of webbing backed by velcro to allow the straps to be adjusted without any additional hardware. The strap does have a couple of embellishments, The elastic hydro/comms loops return from the original Flatpack, Very useful and far superior than the Velcro management often used on carriers and packs. 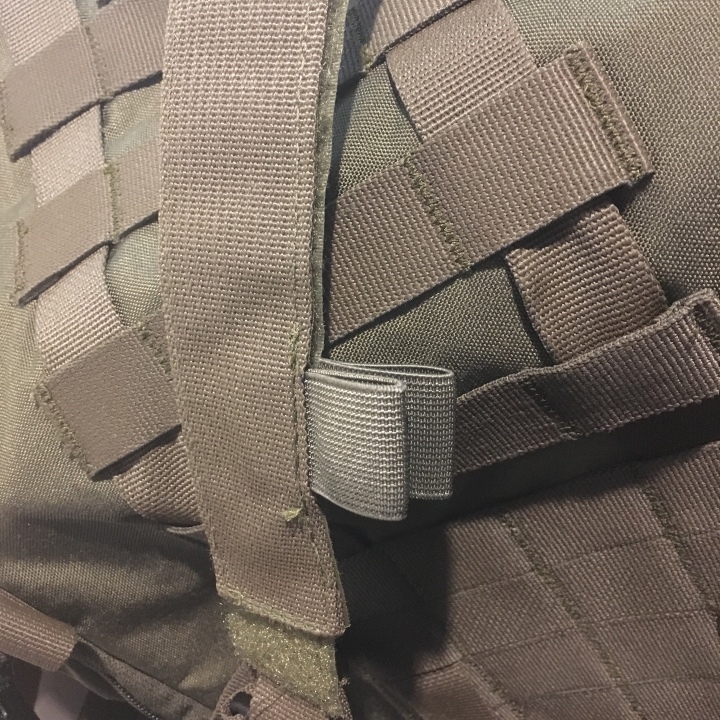 A new addition, And another reason to choose this over the previous incarnation is the included sternum strap. Whilst not an immediately obvious benefit to a lightweight pack, A sternum strap can make a massive amount of difference in the comfort of a pack… Especially if you decide to carry more than the pack is really designed to do (Which I’m sure we’re all guilty of). The addition of a sternum strap necessitates the inclusion of a webbing loop on each strap, This allows each end of the sternum strap to be adjusted up and down to suit your build.

The straps although rather thin, Do work well. I’d suggest not having this pack as your primary long range pack, but as a day sack it’s more than adequate. You could add plate carrier shoulder pads to it but I really don’t think it’s necessary.

One of the main reasons I bought this pack, And a key selling point for many is its ability to be joined up and used seamlessly with a Haley D3 Chest Rig. Indeed it will work with any of the current or discontinued rigs, Mine being the original D3CR in Ranger Green. One item of interest is the switch of hardware colour from the original D3CR being Khaki in colour to the new pack being very much green.

The other mounting option is via the Molle compatible webbing on the pack itself, 4 rows across by 6 deep is more than sufficient to allow the pack to be directly mounted to a JPC, 6094 or similar plate carrier.

Overall, The build quality is good… Not fantastic, Certainly not perfect… But good. I’d honestly have expected less loose threads and stronger pull tabs for the money, But overall it’s fit for purpose. One thing I would point out is that the design of the straps isn’t significantly different from that of the clone, Does it worry me? A little… I’ll certainly avoid letting anyone drag me by the pack. Do I think it’ll break as easily as the clone? No, I’m pretty sure everything from the stitching, To the quality of the thread is superior to that of the clone.

Another minor niggle is the method of attachment for the side straps… it’s a clever design but I’d have preferred something a little more substantial than simply looping the strap through it’s own loop… And the absence of the additional sidestraps for using in conjunction with the D3CR means you’ve potentially got an additional outgoing of £10 or so to get the rig as stable as possible. Again, I understand why it’s not always wanted but it would have been nice to see them packaged with the pack… The way it stands, It’s kinda like buying a new car and then having to pay extra for the floor mats. 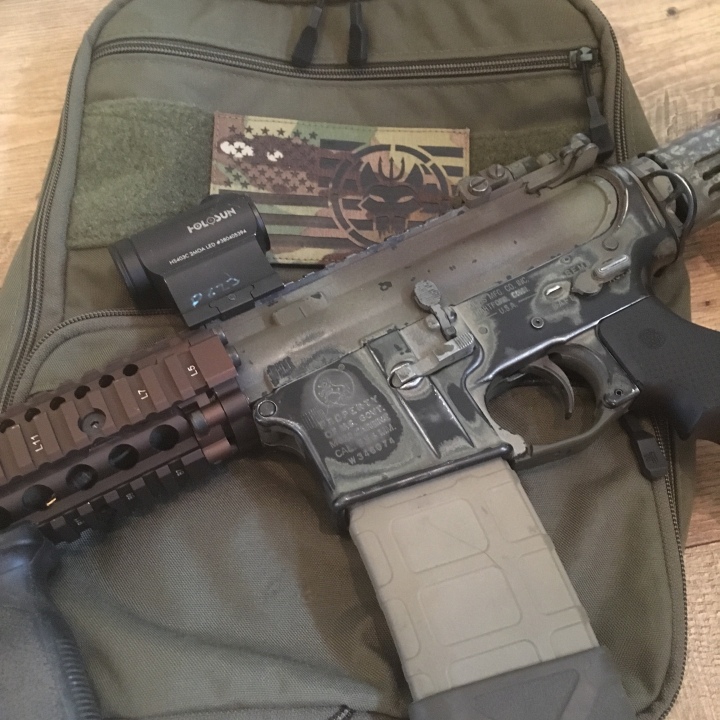 I’m eager to get some more use out of this pack, It proved itself well enough at the recent Legion Airsoft game at Longmoor, I’ll be using this alongside my regular gear throughout the summer as it’s a great option for carrying a hydration pouch. I’ll also be hoping to add this to a Haley D3CR Micro once they become available within the UK. Initially though, I’m happy. It’s a great pack and despite the relatively high price tag it does fit a niche role that isn’t offered by a lot of the competition, Also it’s ability to carry a fully loaded D3CR alongside a water bladder and jacket means that I can happily carry this through a public area to a site without drawing unwanted attention.

Would I buy it again if I had the chance? Yes, Great design and a hell of a lot of modularity. Would I suggest that the pack is a little expensive given its relative simplicity and good but not exceptional build quality? A difficult question, But ultimately yes… A bit more than it should really be, But that’s the case with so much in the real tactical gear world.