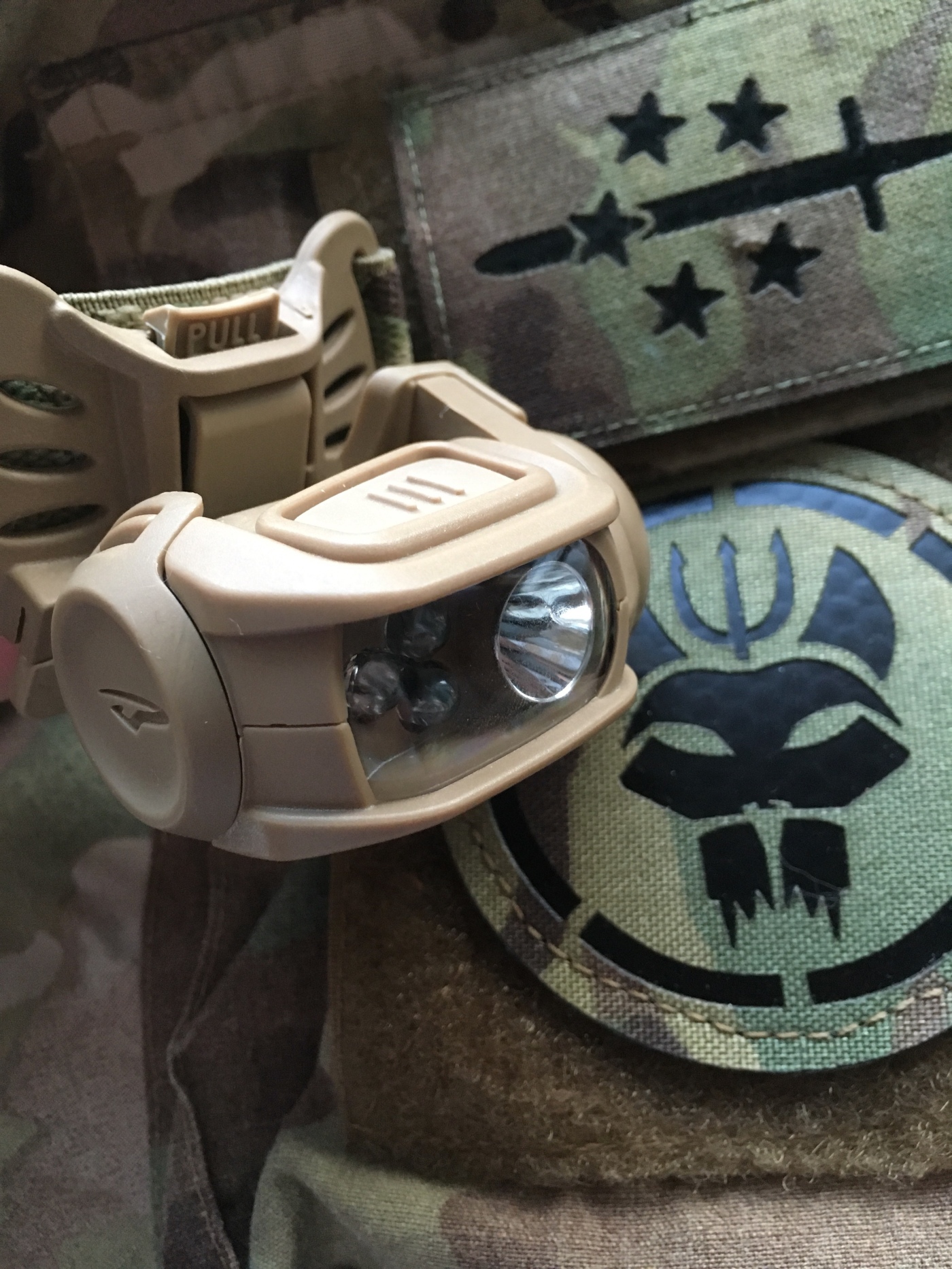 I’ve been a fan of Petzl lights for quite some time, I’ve owned several and at present I own both the TacTikka Plus and E-Lite. However, Despite these lights great quality and performance, They are distinctly civilian in design and purpose, Even the Multicam TacTikka with its low vis red light mode isn’t wholly suited to tactical situations (even those non life threatening situations within Airsoft). I’d like to steer away from talking about the Petzl lights this time though, being exceptional for their intended use and indeed very usable within Airsoft scenarios… I’ll be sure to cover those separately in the future.

I stumbled across this model when researching my previous SEAL Team loadout article, It being given significant screen time on the lead actors neck… An unusual yet functional place to wear a head light.

A lot of people will already know about Princeton Tec’s helmet lights… A useful addition to a loadout, Invaluable for map reading or similar work. Usually these are seen mounted to the helmet rails, forward of the ear cups. I’ve tried this method and it just felt cluttered, I resorted to wearing a head torch around my neck about a year or so ago on night games… Although it takes a while to get used to.

This head torch is part of Princeton Tec’s MPLS lighting system, MPLS being, Modular Personal Lighting System… A fancy way of saying it has multiple modes and mounting options.

Mine being second hand, I received just the basic head band with the light and band/molle adaptor.

The band itself is Multicam, All the attached hardware being what appears to be a high quality impact resistant polymer… Probably zytel or similar as it’s been used in the past by the company.

The body also appears to be an impact resistant polymer… Although the first thing that stuck me was it’s weight… it’s extremely light! Weighing in at just 66 grams with the included strap and a single CR123a cell inserted. This is undoubtedly why it’s so light, Many civilian models using standard AA or AAA cells, Getting a high enough voltage and current to power a high output LED generally means multiple cells, And that equals weight.

With a Tactical head torch you generally don’t need a massive amount of lumens, It’s not really designed to be your primary light source… Rather an alternative that’s always on you and doesn’t require you to point your weapon at something to light it up.

The Remix Pro is stated as having 150 Lumens in its primary White light, this seems low in the current trend of 1000+ lumen weaponlights But in actual fact it’s plenty.

The real kicker is that depending on how you use the light you might not ever use white light at all… There are a few versions of the light, some offer Red, Blue, Green or even IR lights in a triple LED cluster next to the main light/reflector assembly. There is even a model which incorporated an IR strobing mode which would have obvious uses for IFF in real life.

The model I received (And I’m head over heels about this!) has Red, Blue and IR LEDs within its options…

Red is self evident… Low light work such as map reading and close up work where NODs get a little in the way.

Blue, Not a colour I’ll use a great deal… Useful for spotting blood that’s difficult to see apparently… I’d happily test it out but I’m not committed enough to the blog to open up a vein 😂. 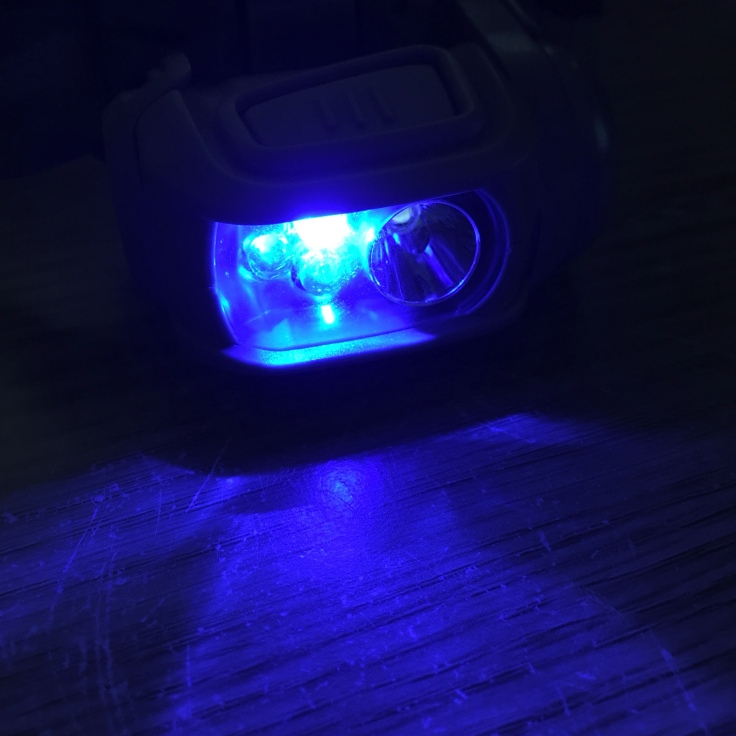 IR, Perfect for use with NODs… not so much for aiming but navigation indoors and under a moonless sky it could help massive amount.

The main “White” light I’ll probably not use a massive amount but it’s a no brainier to have it included.

The LEDs themselves are arranged in a 3+1 cluster. The IR being on the far left, Blue atop the cluster, Red under it and the White as a separate LED within its own reflector housing.

To use the light, A single button controls all functions. A quick press takes you straight to red light, An unusual set up for head torches in general but perfect for tactical use. Tapping the button again will either swap to the blue light if within a second and a half of the first press, Or it’ll turn the light back off if pressed after a pause. To use the main White light you must have the red or blue light on first, Then press and hold the button until it changes mode. To turn the light off, simply tap the button again.

IR is just as simple, press and hold the button for a second and a half. The IR light will then remain on until the button is pressed again. A worthy note is that you cannot swap from IR to Red, Blue or White light without turning the light off first… A massive benefit to maintaining light discipline.

Another nudge in keeping the light free from potential light NDs is that the button is recessed and the whole unit can be rotated to cover the button completely.

The unit itself is able to be molle mounted, simply remove the headband and directly mount the back plate to your molle of choice… An additional mount is available for a standard NVG mount but having actual NODs makes this rather redundant. 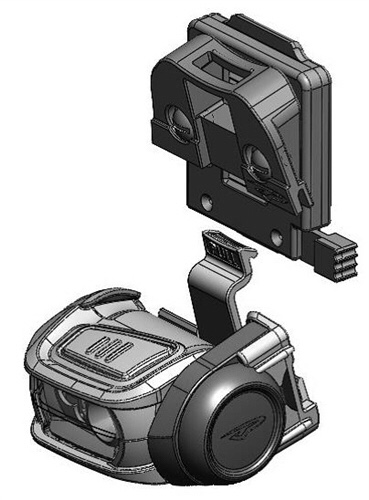 The battery compartment is simple to access, simply pop open the gate style cap on the end of the unit and place in your preferred brand of CR123a cell.

Environmental protection is strangely less than expected… Its certainly waterproof, Being IPX4 rated. IP standing for Ingress Protection, X is used as a filler numeric when no data has been collected regarding solid particle ingress and 4 being its waterproof rating… 4 being splash proof. IPX7 is the lowest rating that involves complete immersion. I don’t think this will cause any issues, In the context I’m using it the worst is going to get is rained on. A little rain is usually alright on even the most minimally protected electronics.

The beam isn’t focused or totally panoramic on the white light… It’s about perfect for most non tactical activities, Cooking and moving around it provides plenty of light without being too much.

The red and blue lights are more focussed but as you’d expect, Without the reflector assembly they provide a lot less range. The IR light is around the same as the white in its effectiveness, lighting up a rooms interior with the aid of suitable optics. It again suffers on range but only due to its lack of reflector, But it’s really not meant to be used as a primary light source… A weapon light or IR torch is far more suited to picking out targets at more than 10m or so.

Overall, It’s a niche item… I’m very lucky to get hold of one. I know another lucky buyer managed to grab one, But they really don’t pop up very often in the UK. I’m guessing the guy who sold them probably picked them up in a PX whilst working with a US unit, Or possibly it’s an issued item… Either way it’s another little bit of “Cool Guy Gear” and a great addition to my loadout.