I have a bit of a guilty pleasure for lights… I’ve always appreciated having a good torch on me. I actually carry 2 on me at all times, one on the car keys and another on my house keys (never put other keys on your car keys, it’s bad for the ignition).

The first is on my car keys, An ultra lightweight light (Also by Nitecore) that is purely used to locate crap in and around my car… Or often under my desk at work. The second is a little different… A Fenix E05 keychain light, it’s on my house/work keys… I rarely use it but it’s handy when it’s dark for finding the lock or finding my car keys… See, It kinda makes sense now?

I used to “EDC” or Every day carry, But after a while in the forums and the groups I realised it wasn’t really a specific trend I was following, I’ve just always had a few bits and pieces on my to make my life easier. Being a lover of gadgets, I own a few torches (17… Wow, that’s a ridiculous amount of torches), But each one is used for a different task.

This one, The Nitecore MT2A is my allrounder… I’ve got brighter torches, Ones with more range, ones that are more durable and easier to carry but it’s this one I’ll try and have on my person if I’m out in the wilderness or in the car.

The process I went through when buying this was that I wanted a mil/police spec light that didn’t take CR123a cells. I wanted it to be small enough to stick in molle or a keeper, It had to have a red filter option and it had to be activated via a button with the option of momentary on/off.

On to the light itself, An aircraft grade aluminium body with a watertight thread on each end houses the 2 AA Cells powering the light. On the rear end sits a U shaped cap which houses 2 lanyard holes and protects the rugged yet grippy rubberised push button. 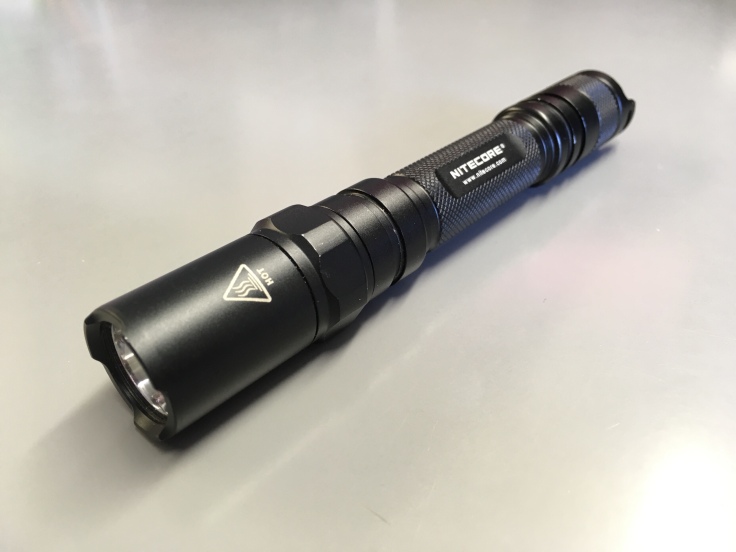 The body is knurled on about 50% of it’s surface, A cutaway section on each side details both the manufacturer and website very neatly lasered on one side:

And on the other side the Model name is written clearly alongside warnings about disposal in a bin and the CE (Conformité Européene) and RoHS (Restriction of Hazardous Substances) markings are prominently displayed, again… Lasered nearly on. 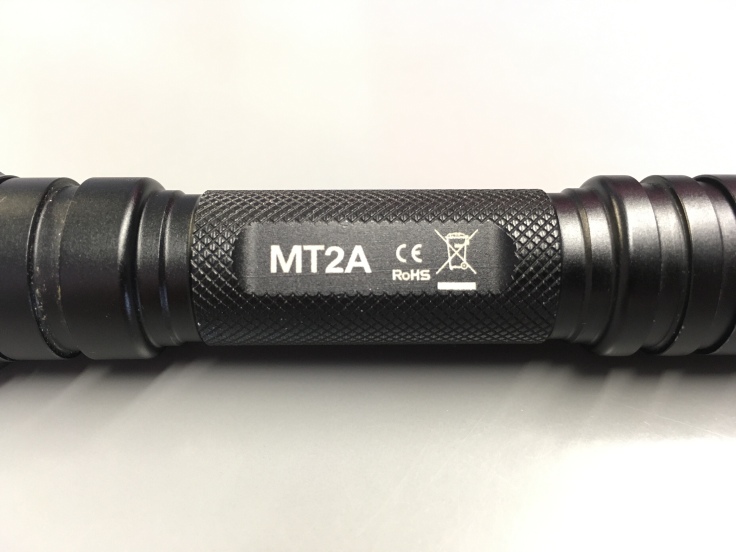 The head unit of the light is a unique shape, Being a non flared tubular design with a hexagonal ring machined into the head itself. This design serving to assist in a comfortable grip (Especially when wet), Making the transition between light modes that little bit easier and also to prevent the light from rolling off a flat surface such as a car roof.

The head is marked with a heat caution symbol and a unique serial number on the other side, again… Lasered on.

The bezel is a turreted design, albeit a modest and not aggressive style. I’d still not want to be smacked in the face with it and I’d hedge my bets it would be a sufficiently good glass breaker in an emergency. The glass is labelled as “Ultra Tough Mineral Glass with a dual-side anti reflective coating” which effectively means it allows a better transmission of light (Up to 8% more efficiency according to those in the know) along with the durability benefit of a toughened glass lens. 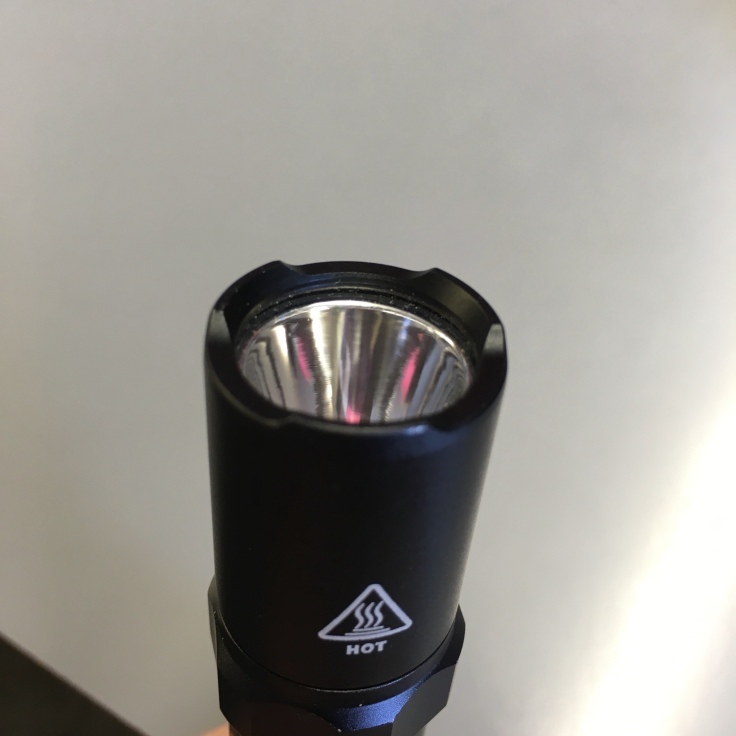 The light is very comfortable to use, the knurling being smooth enough to not dig in but allowing that little bit more grip. This combined with the overall profile of the light means that it’s surprisingly grippy, Especially when compared to a smoother light like a Surefire 6P or LED Lenser T7. That’s not to take anything away from those two, But this light certainly feels more comfortable to hold. 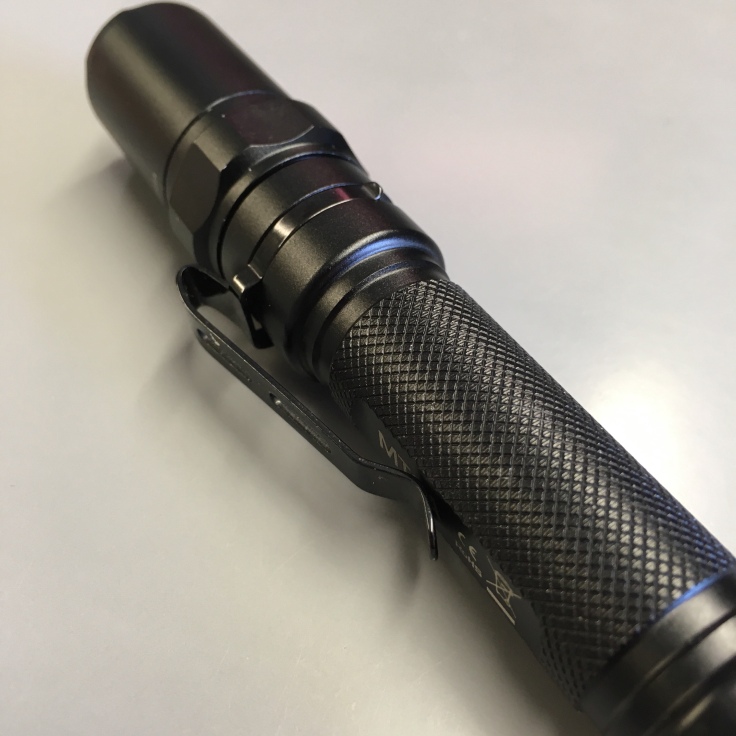 There are also a couple of little details that are easily missed upon first inspection, I’ll be honest I’ve had this light a couple of years and have only just noticed that the front end of the body is internally bevelled, the only explanation I can think of is to aid the insertion of fresh batteries… A little over engineered but a neat little addition in the overall design.

Each end of the body is machined and left mirror smooth, Minus the anodised finish that’s throughout all the external surfaces… this helps minimise the potential for poor conductivity and this puts as much juice into the LED as possible. An O-Ring on each end retains the lights IPX8 integrity rating (Continuous immersion in depths greater than 1m), An impressive rating for a relatively cheap light.

The anodising itself is Type III conforming to the MIL-A-8625 specification, In layman’s terms it’s tough… Durable enough to be considered a milspec coating. I’ve not noticed any wear whatsoever and I’ve had this in and out of my pocket in all conditions. 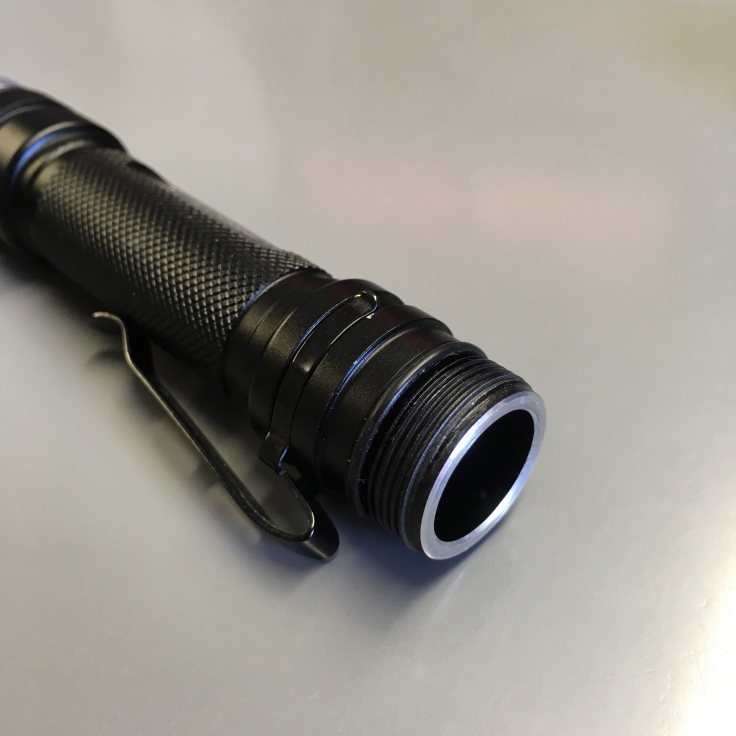 With the light you get a lanyard and a pocket clip (This can be mounted either Lens up or Lens down), there’s also a spare tail-cap button should you wear the original one out. Additionally I purchased a push-fit red filter for those times I need a little subtlety, this initially worked well although it became a little too easy to remove, So now a strip of gorilla tape on the bezel keeps it firmly in place.

Onto function… A momentary press or a firm click will turn the light onto “Turbo” which is its maximum output setting of 345 lumens/5800cd (Candela), either releasing or clicking the button again will turn the light back off. A fresh set of good quality cells should give you a good 2 hours of use, Although it’s surprising how much difference little things like temperature and cleanliness of contacts can make on a lights brightness and indeed battery life.

Once the light is on, a simple anti-clockwise twist will access its secondary mode… this can be preset to one of five options:

I personally have mine set to “Low”, The theory being that I’m either going to need high output or low for closer range stuff.

The Strobe mode is particularly unpleasant, it scales up and down in hertz and is extremely disorienting… If you ever had to fend off an attacker I’m sure you’d easily be able to effectively blind them before taking “core samples” of their face with the turreted bezel 😉.

I picked this one up off the guys in Taunton Leisure, I’ve been a regular customer of theirs and with the loyalty discount you get from previous purchases, They usually work out cheaper than chain stores like Go Outdoors. Overall for the price I’d thoroughly recommend it, It’s as good as any of the other mid range lights such as Fenix, Maglite and LED Lenser as an overall light, I’d also go as far to say that if I only had one light to use in an emergency it’d be this one.