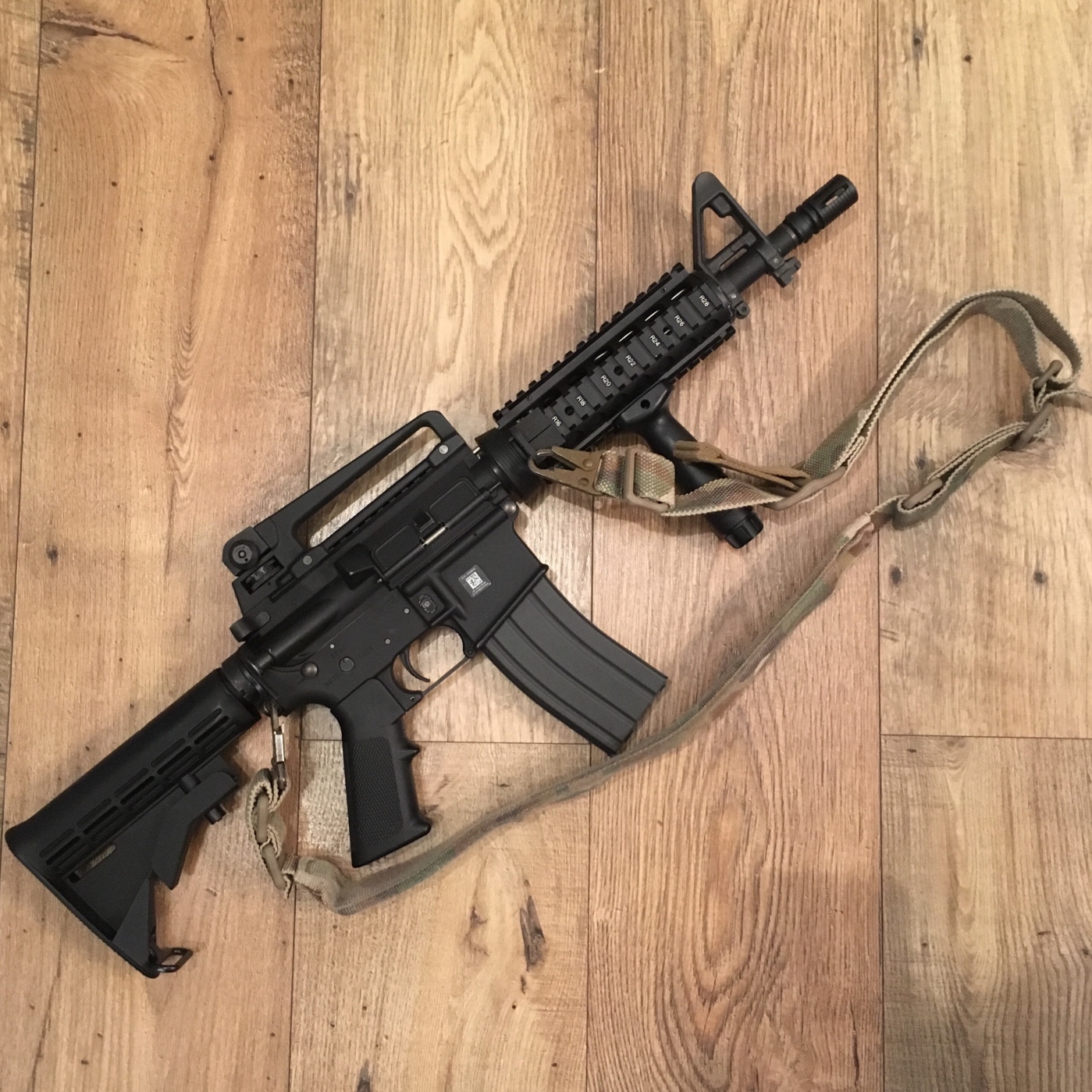 Sure, If your £5 sling is strong enough and has the features you need then more power to you, But the sad truth is that generally it’s just a cheap bit of nylon with potentially fragile buckles that will fail right when you need it not to… Probably not what your weapon deserves and we’ve pretty much all seen it happen.

There are many options out there, Some more expensive than others… many offering certain features and benefits such as wide padding, adaptable attachment options and ease of adjustment. The likes of 5.11, Ferro and LBX offer reasonably good slings for an affordable cost, For those who don’t mind spending a little more, Maybe just for the label (You know who you are)… Blue Force Gear offer what is renowned to be one of the best slings on the market.

The Vickers Tactical sling was developed from a partially home made/adapted to purpose sling Larry Vickers used on his personal carbine in the late 80s, Larry Vickers at that time being a member of the US Army’s elite SFOD-D (Delta) was in need of equipment that quite often just wasn’t available. 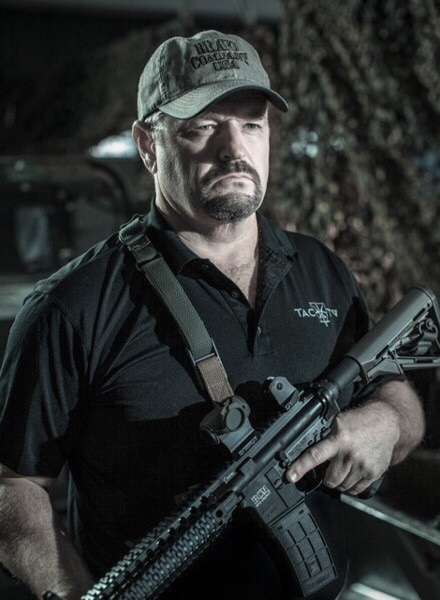 Its something that’s always been a soldiers chore, Adapting issued equipment and supplementing it with other non issued items when needed. Soldiers have often carried knives, pistols, load bearing equipment and even uniform that’s commercially bought, there’s a solid argument for buying commercial spec items, especially for special forces where your end requirements might be more akin to that of a triathlete, mountain climber or scuba diver than that of an infantry soldier.

Blue Force Gear state proudly that this is their best selling item… Selling more than even their popular ten-speed pouches and chest rigs, I’m sure this is partially due to the enormous order a few years ago for the USMC’s M27 IAR ,Which co-incidentally has also been selected as the standard Rifleman’s weapon for all MOS 0311 (Military Occupational Specialty – Marine, Rifleman, Infantry).

The sling has also been immensely popular with other branches, Especially special forces from the world over. Popping up in reference pictures mounted in all kinds of exotic weaponry, It’s fair to say that the sling is one that many will see as “The Holy Grail”.

I was nudged into buying one, As I often am by a guy who a few of you will probably know from Cobalt by the name of James. We’d been chatting about various options and this was the one he recommended. 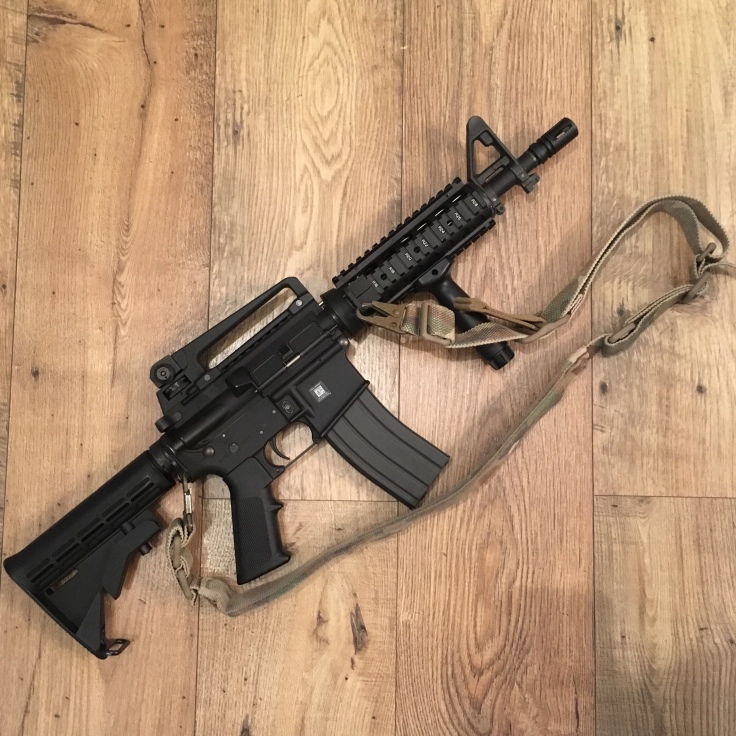 The Vickers sling does come with a very snazzy heat transfer label, Proudly showing its heritage and NSN number. Mine however decided to wear off after the first 6 months… To be fair I did put this sling through a shitload of abuse. I used it to pull myself through a first floor window… It saw Rain, Hail, Snow, Sun and a lot of sweat before it peeled off.

I opted for a padded sling in Multicam with Molded Acetal hardware for the adjuster, The other option is CNC aluminium but due to the potential for metal on metal I felt the Acetal hardware would be preferable… It’s also the same one as seem most often (Likely for the same reason) on most reference pictures. 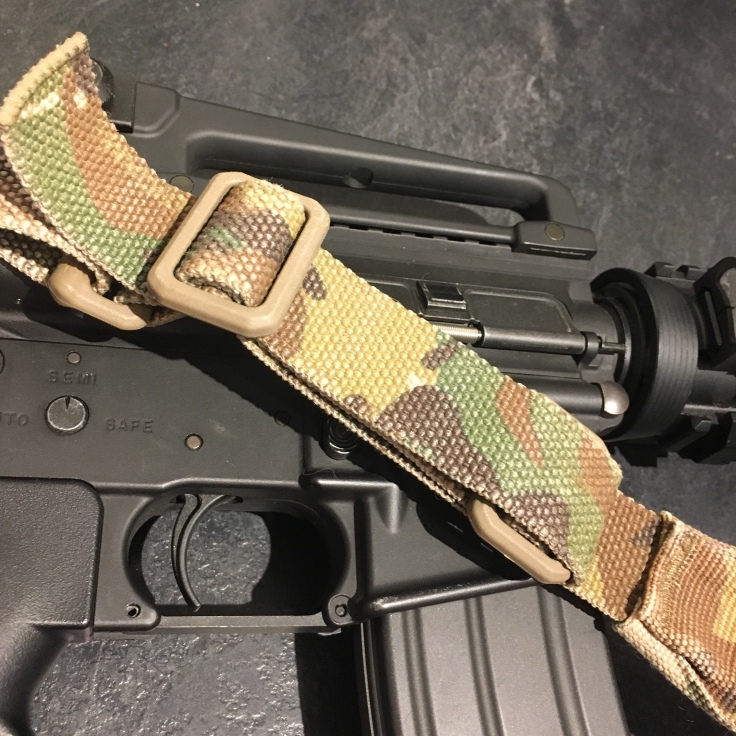 Each end of the sling has a Acetal Slide lock with enough spare webbing to easily accommodate sling adaptors or even mount directly onto a suitable mounting loop on your weapon of choice. 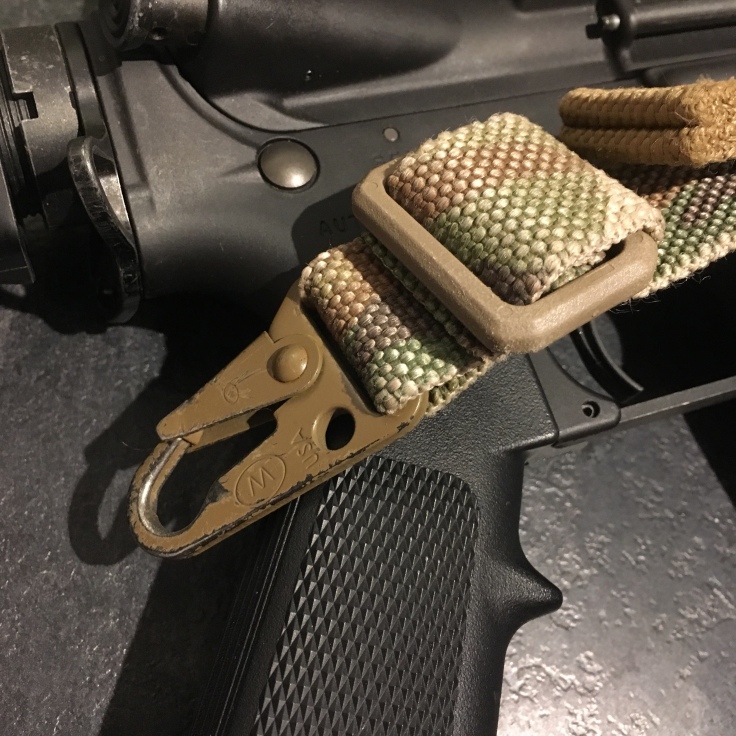 On the padded end, there is a second slide lock to assist with webbing length and management, adjustment is via a length of rugged webbing with a sewn in toggle attached to a bigger slide lock, allowing adjustment to cinch the weapon close in whilst stowed or allow a free range of movement whilst the weapon is shouldered. 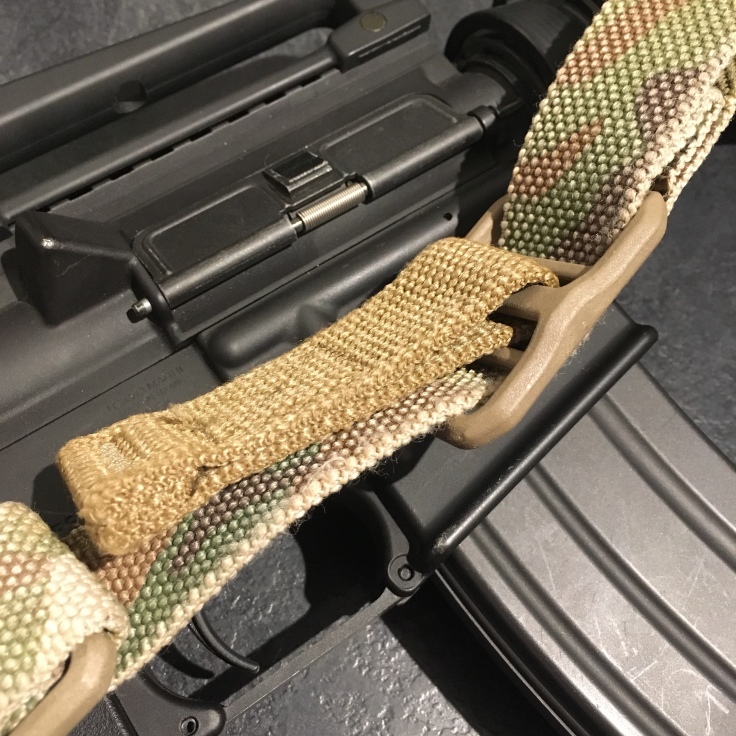 The webbing itself is comprised of INVISTA Solution Dyed Cordura Webbing, this allows the colour and IR treatment to be fully impregnated within the material itself. The material does have a rather chunky, rustic feel and the Multicam does make the snakeskin-esque look of the webbing pop a little. 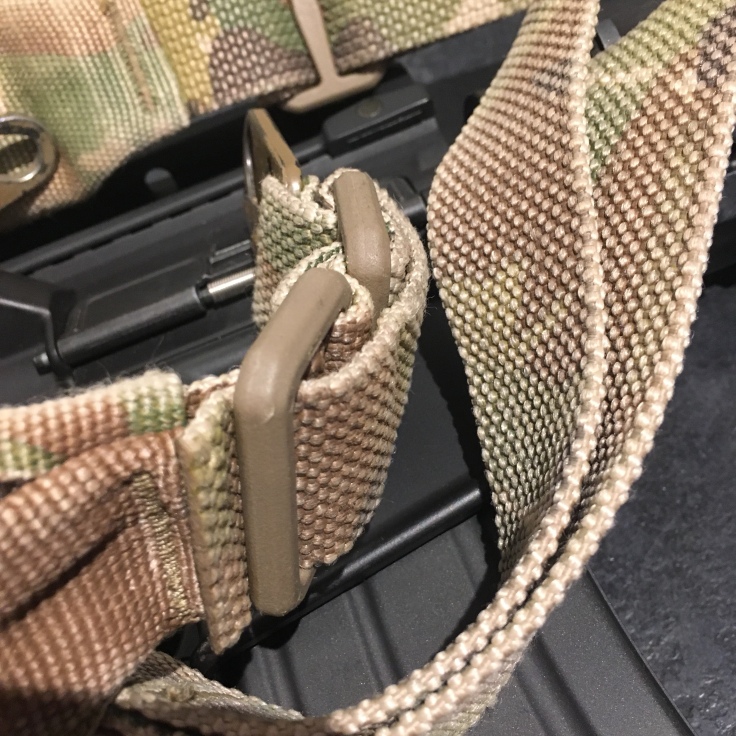 The sling is held together using TEX 90 bonded nylon thread, and so far despite some real abuse over the last couple of years it’s not shown so much as a loose thread.

I’ve opted to use my sling with H&K type clips, these work well with my CQD sling points and allow me to transfer the sling from one replica to another. It’s not the quietest option but it’s tough as hell and I’ve got used to dealing with the metal on metal noise. 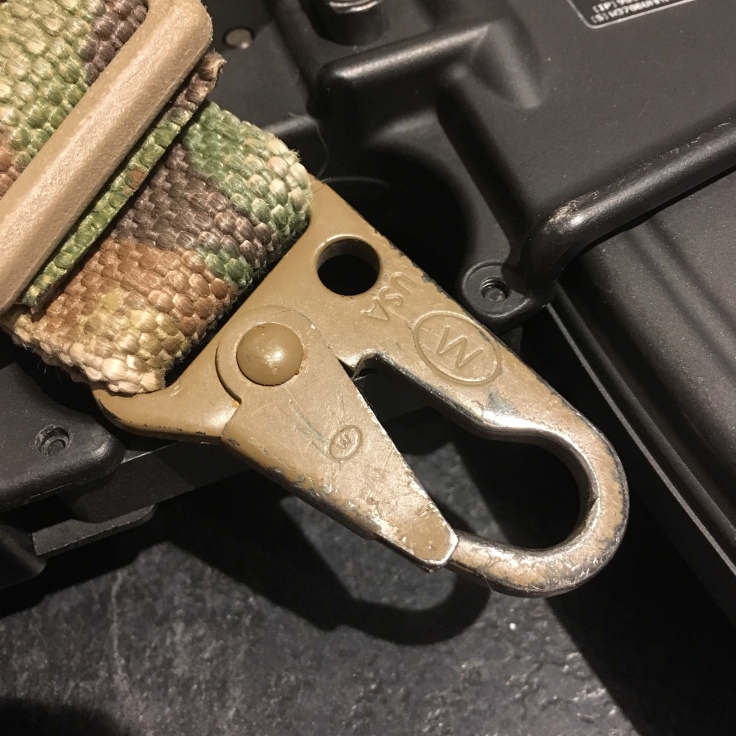 One thing that’s constantly impressed me is the sheer durability of the sling… Sure, mine doesn’t look new by any stretch and if I were to sell it I’d advertise it as “Salty” but it’s not lost any of that integrity. It’s also not lost it’s shape, Something that I was wary of with it being a padded item. The padding itself is encased in a tubular sleeve which is bar-tack stitched either end to the sling webbing. It’s low profile enough to not get in the way like many padded slings van yet soft enough that with a little use and the correct adjustment you’ll not suffer any discomfort. 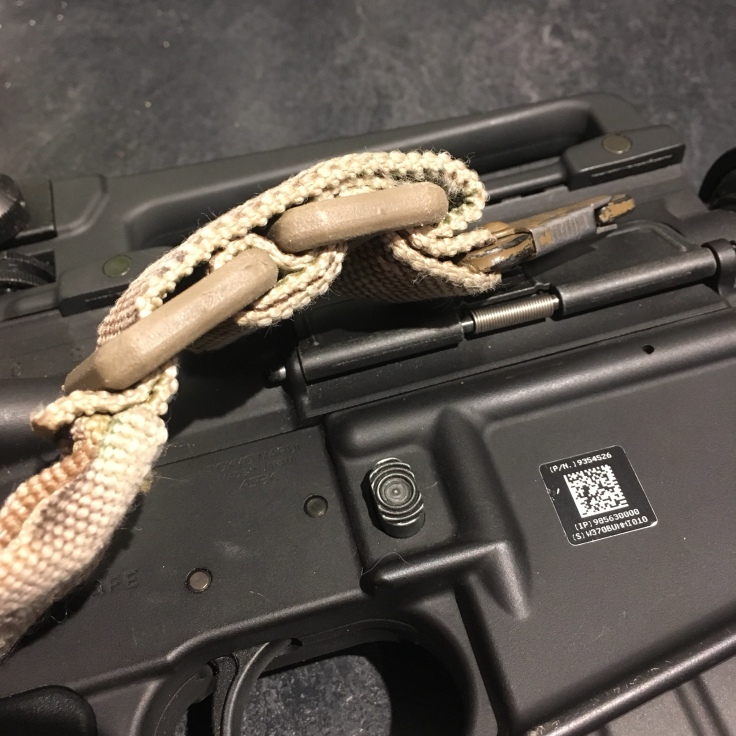 One little accessory I’ve added is the BFG Sling Sleeve, It covers a 6″ portion of the sling and allows the whole thing to be folded up and stored away when not needed. It also covers a couple of the buckles when the sling is in use and keeps the loose ends firmly secured. It does wear in quickly due to the elastic nature of the material used but like the sling itself it hasn’t worn to the point of my worrying about replacement. 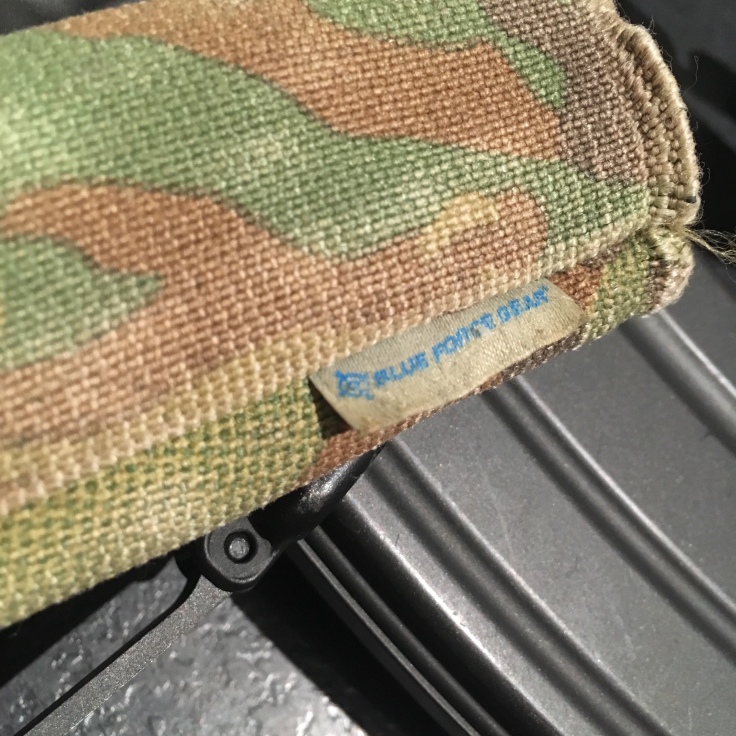 overall, I can’t think of a reason to not recommend this sling… You could argue that a £55 piece of webbing is a little expensive, there are very well made alternatives by the likes of TacBelts UK and FRV Tailoring but sometimes you have to treat yourself to something a little special.