So, the Element EX276 “LA-5 IR Illuminator” is already NVG compatible I hear you say… well, It is and it isn’t.

Whilst it does feature a “near IR” laser alongside it’s red laser and white LED light, it’s fair to say that for the most part the laser is on the piss to the point where unless you’ve gotten extremely lucky, you’d have to perform the following modifications to make sure it’s straight enough to zero to your weapon.

I’ll cover the Element LA-5 in another review piece but I’ll say this much, with the modifications done as enclosed it’s perfectly skirmishable and should hold zero even with a GBBR (it’s certainly held with mine).

So, start by unscrewing the bolts on the rear rear of the casing and then finally the three on the front, then carefully pull the front off the LA-5 without pulling too far (lest you damage the wiring). 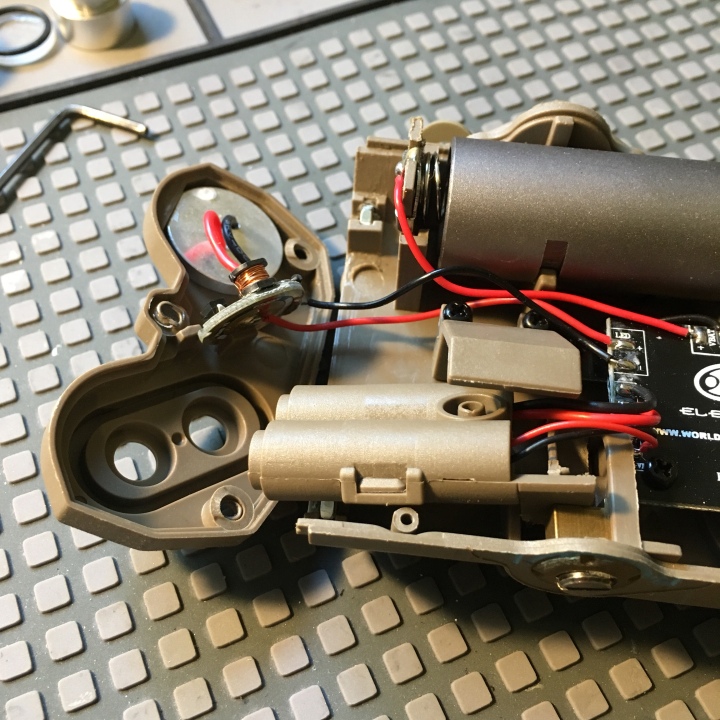 You can then pull off the bottom section which will reveal the circuitry and laser housing, I’d suggest at this point you ensure the battery isn’t connected, although not vital you’d cause damage should one of the contacts be bridged.

You could also take the time to purchase a more suitable laser module and insert it in place of the )just about visible) red laser that purports to be IR. it’s also worth noting that neither of the two lasers are co-witnessed, that is to say that on a real PEQ15 or LA-5 the red and IR laser will produce a true parallel beam with the paths remaining about half an inch apart out to usable ranges. The Element clone however is reliant on the inevitably poor QC of a laser module costing less than a Freddo Bar, much less actually… But you could get lucky and have a gem out the box, this would certainly help with zeroing.

So, onto the modification. The laser units are held in a twin casing, supported at the rear by an L shaped bracket and sprung diagonally against a horizontal and vertical adjustment block. These blocks are adjusted via a screw which rapidly draws the block in and out, Allowing the rear of the laser housing to move… This in turn adjusts the aim point of the lasers. 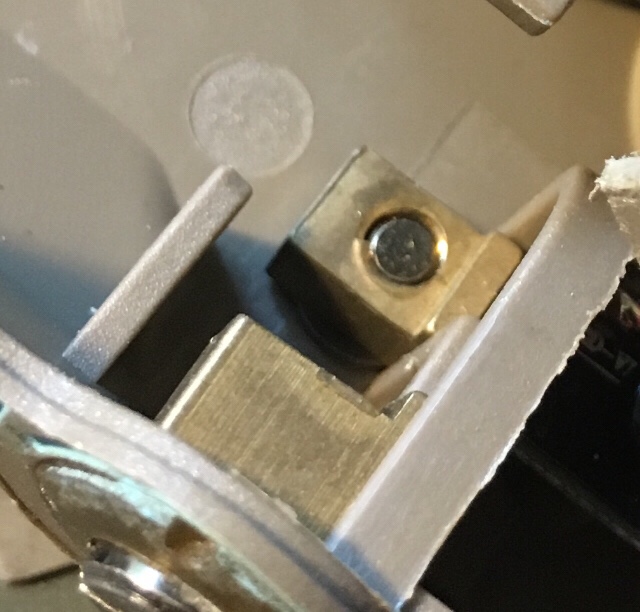 Sometimes however there isn’t enough movement available to put that laser where you want it, It’s frustrating and if using it as an aiming device with NVGs it’s a real downer. By removing the L bracket and grinding down an extra couple of millimetres you can generally provide the unit with enough range to zero in the laser. 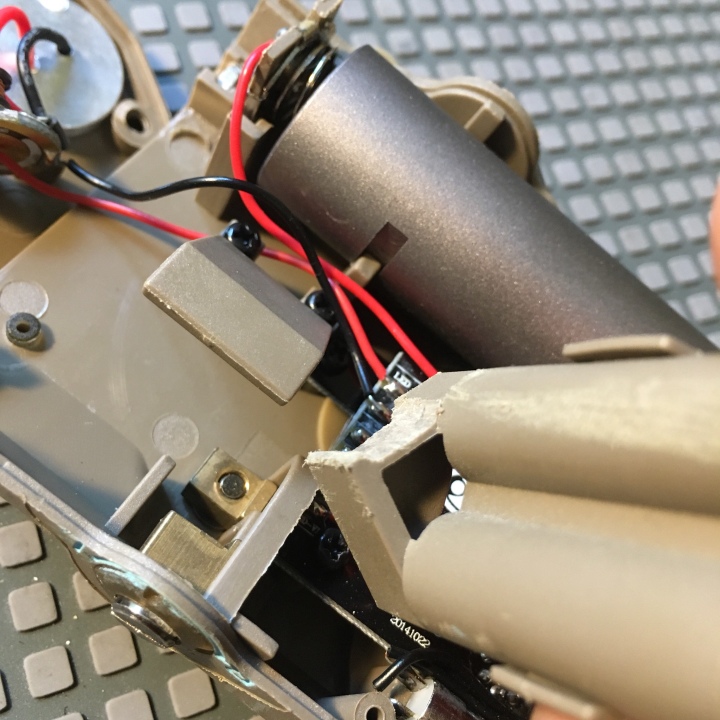 Once this is done you could simply replace the components and zero in the laser… However, there is an additional step that can help keep that laser true and prevent your zero from drifting. I’m certainly not the first person to do this, It’s a pretty well known tip to pack out the inside to keep the laser unit supported. I’ve opted to slide a foam disk around the unit, one that was inside an old suppressor that I no longer have… Mostly thanks to a central belief I have in not chucking anything away that isn’t easily fabricated. 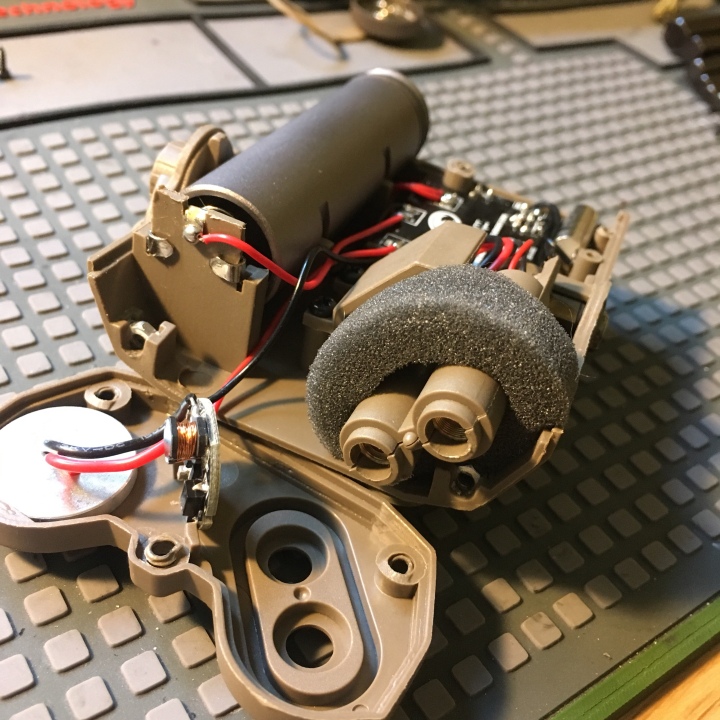 You can then pop the casing back together and be assured that the whole unit is now a little bit more bomb proof than when it left the factory. 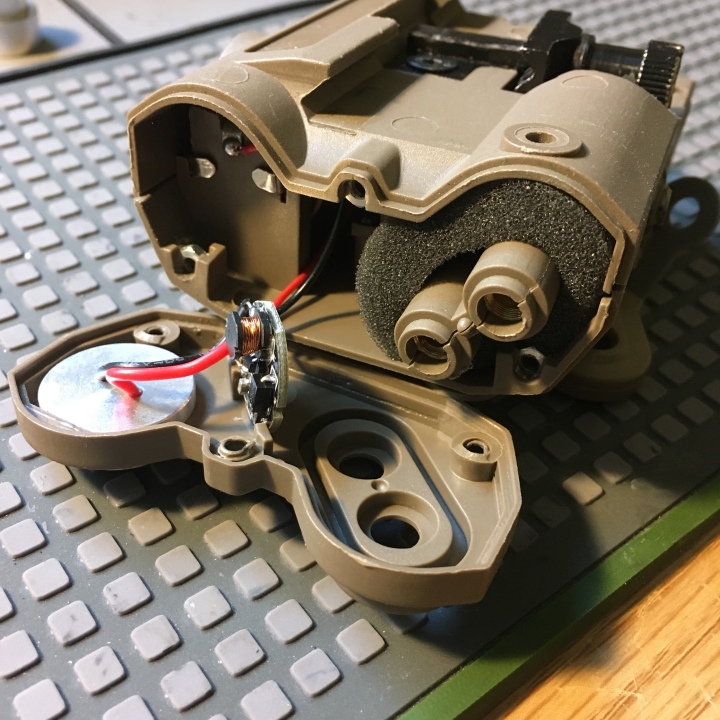 If you really want to crack up the mods, blacking out the LED, although seemingly counterproductive will prevent an excess of light leakage whilst allowing enough light to come through for green/red light ops. There is also a tiny green LED on the rear of the unit that I tend to tape over to prevent it from showing up under NVGs, it’s surprising what can show up when looking at with NODs… your red dot sight, radio and even your tracer unit can give off enough light can make it easy to spot someone when even with NVGs they’re otherwise hidden. 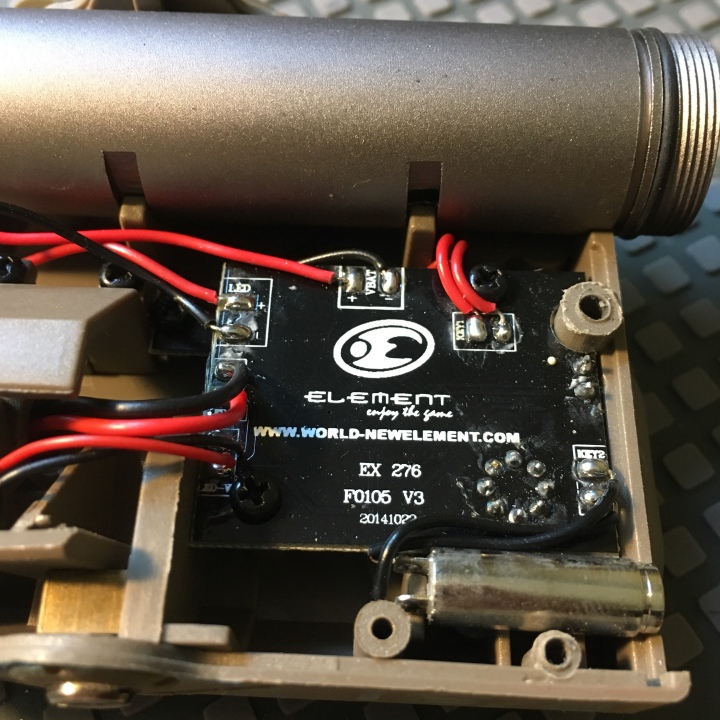 It’s one of the biggest things that separates the real deal from the Element clone, The real PEQ15/LA-5 uses a true IR illumination via a refracted laser… It’s beautiful but for £1500 as an average cost for a real steel PEQ it damn well should be. The Element clone uses a bog standard high output LED, which by the way gets incredibly hot… so hot in fact that the whole light casing acts as a massive heat-sink and generates enough heat that I’d imagine it would show up pretty bright under FLIR. 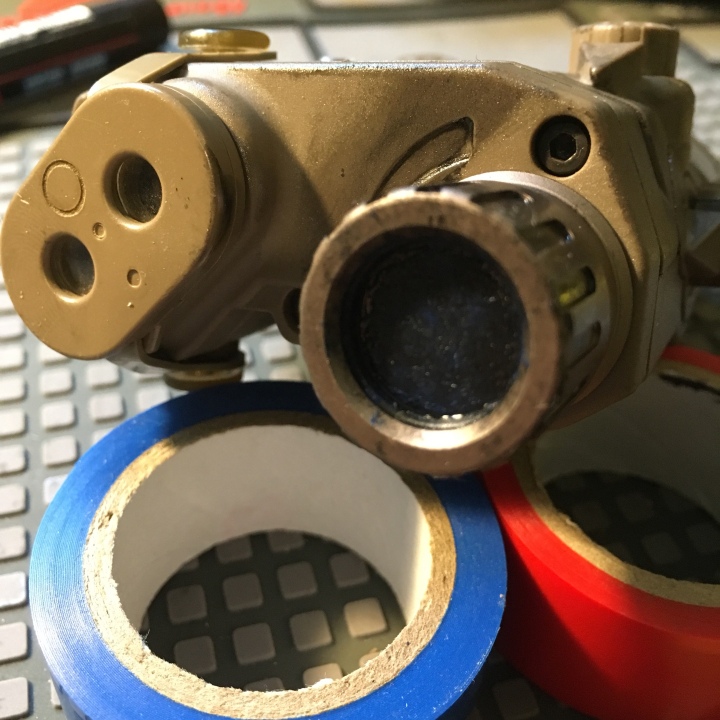 Another little point to note is that the little flip cover on the LA-5 is a representation of a Pattern Generator, on the real unit these little plastic tabs split the laser beam, much alike the mouse shaped laser pointers you find in pet stores. 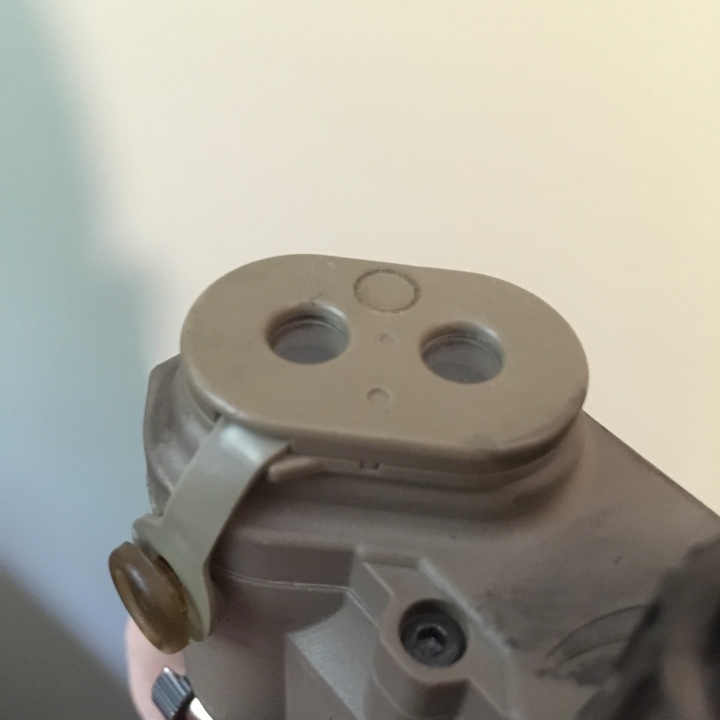 If your able to find one for sale, grab it. Cool points for finding a triangle generator… I’m stuck with a mere circle but it does still allow me to switch to a shape for individual target spotting… Although using it with such a cheap laser unit does create a fair amount of spillage. 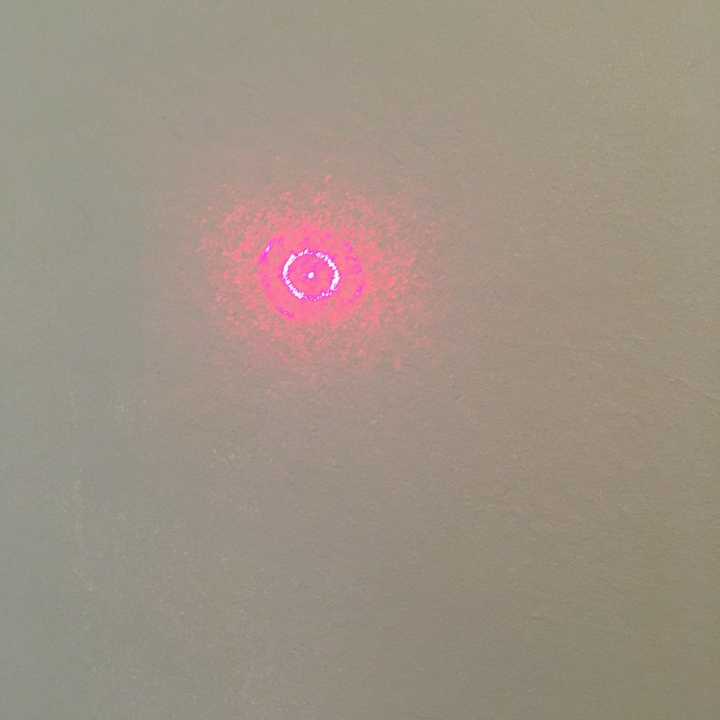 You should now have a pretty good, functional and zeroed LA-5 laser with a usable amount of light coming from the illuminator, the final step now would be to weather the unit a little… you can use anything from krylon to dirt but I’ve used what I have to hand… Humbrol Matt Black. A wash will naturally find the lines and recesses and following up with a rough handling will give it an authentically dirty look. The colour on an Element LA-5 is pretty good but as new it looks far too clean, I’ve yet to see a real PEQ that doesn’t look like it’s gone through several tours of Afghanistan strapped to the outside of a helicopter. One thing I have recently done is to remove the stickers, this is purely as the ones provided shine so much that one of the Diablo guys swore that I had a light on at a recent game so I peeled them off to reduce my visual signature.. I’ll probably leave it as it is but Jay from Taranis Blog does run batches of UKSF correct LA-5 stickers so depending on my financial situation when they next come up I might treat myself. 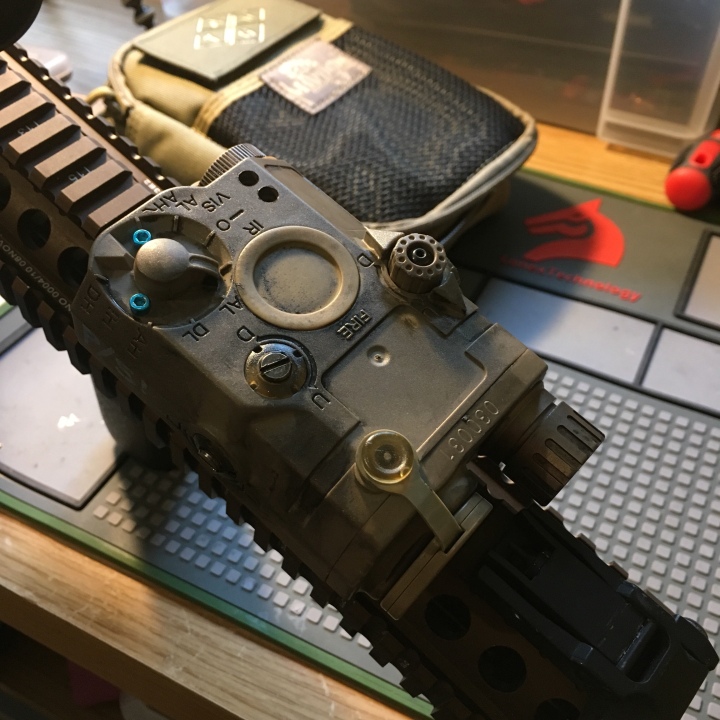 I hope this has helped some of you who might have been having issues, the “How to” will work even if your looking to just get that red laser on target and firmly set.