The classic M1911A1, I could spend hours and hours talking about why this pistol is so iconic, From movies and games where this pistol takes centre stage such as Saving Private Ryan and Call Of Duty to the real life events which have carved out a slice of historical immortality for the pistol and those that have used it… All the way from Sgt. Alvin York in World War 1 to the more familiar actions of Shughart and Gordon in Mogadishu during Operation Gothic Serpent, The M1911A1 has been involved in more Medal of Honour actions than any other weapon, although when you bear in mind the length of service combined with the fact that if your down to just a sidearm, your probably going above and beyond the call of duty it’s hardly surprising that this pistol has become the epitome of being “A tough old bastard” that refuses to die. 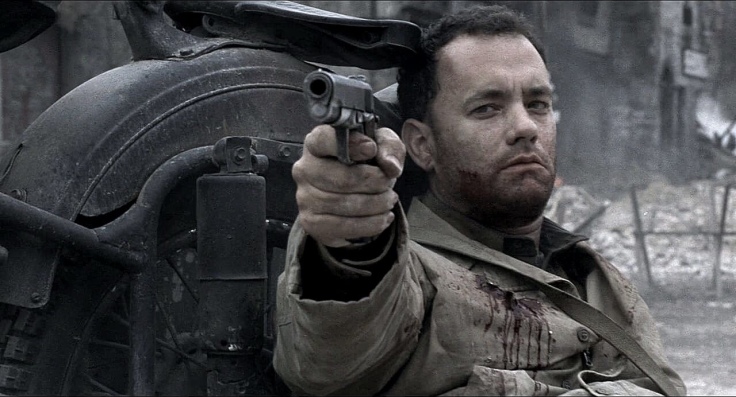 There’s a reason why I’m a little in love with the M1911A1… I’ve personally got history with this pistol, Long before pistols were outlawed in the UK I spent a fair amount of time shooting at the local pistol range with my father and grandfather… I had the privilege of shooting hundreds of different pistols over the years, mostly my grandfathers revolvers, which at the time never interested me… The one I religiously sought out was the M1911A1… Luckily, a club regular and family friend was a fan of the classics and alongside a mint condition Luger that was rarely fired, sat a 1940s vintage M1911A1 that at the tender age of 8 or 9 I shot at every opportunity, I’d choose this over all the other pistols on offer (Except a suppressed High Standard HD22 that was stupidly quiet and a great plinker)… Crazy times.

The Marui replica is visually a pretty good representation of the M1911A1, Like any Marui and indeed most replicas it fails to match the look of a heavy, cold parkerised steel weapon… However Airsoft is a pastime of compromises, we compromise on range, recoil, look and feel of our replicas, Indeed I’m of the firm belief that PTWs are only as common as they are due to their compatibility with genuine parts.

The Marui M1911A1 is traded to a near realistic level, bearing the trades of a Colt manufactured M1911A1 between 1914 and 1945 at their Hartford, Connecticut factory under Brigadier General Guy H. Drewry, his personal pistol having the “Sweetheart grips” that were an uncommon but well publicised personalisation for soldiers to make.

The pistols patents and markings for the most part faithfully reproduced and the colour of the frame and slide being a dark grey, not quite correct but honestly not too bad… It certainly photographs well.

The looks of the pistol are the very epitome of a classic design, there’s little embellishment unlike a Beretta or other European designs… it’s mostly function with a little form built in, just enough to keep the aesthetically minded happy.

It’s design is simple yet elegant, the surfaces smoothed where needed and left plain where anything but plainness would lead to over-engineering. The only questionable exception to this is in the front design of the slide where material is scalloped away from both sides on very front… It could be argued however that this is to alleviate front end weight and make the pistol more streamlined for a smooth draw.

The profile is slim compared to more modern designs, a relic of when a 7 shot capacity was considered relatively generous and indeed for some time the norm. This again will always be a benefit to those wanting a relatively powerful pistol in a small package. More modern pistols have twice to three times the capacity and even more modern 1911 designs often put the capacity into double figures, but its supporters have always praised the .45 ACP for its supposed stopping power compared to a standard 9mm Parabellum cartridge… Thus negating the need for more capacity.

The controls are mostly cast aluminium as is the norm with Airsoft pistols, the finish wearing as you’d expect after the 7/8 years I’ve owned this pistol.

Onto the individual controls themselves, the safety is characteristic of an early 20th century pistol… Advancements in design and methods of operation have changed the way that pistols are made and used, this having a small frame mounted safety on just the left hand side with a small knurled bump to assist in activating and disabling the safety.

The other safety is the grip itself… the “beavertail” safety works by preventing the trigger bar (which surrounds the magazine well) from moving rearward unless the pistol is held correctly, this is a very simple yet effective way of preventing the pistol from being accidentally fired if dropped.

So, onto the firing mechanism itself… The real M1911A1 is a single action semi-automatic (self loading) hand gun, this means that the action of pulling the trigger on a loaded and cocked weapon will fire off the chambered round, eject the casing and chamber a fresh round. The pistol must be cocked, safeties disabled and the hammer to the rear for it to fire. 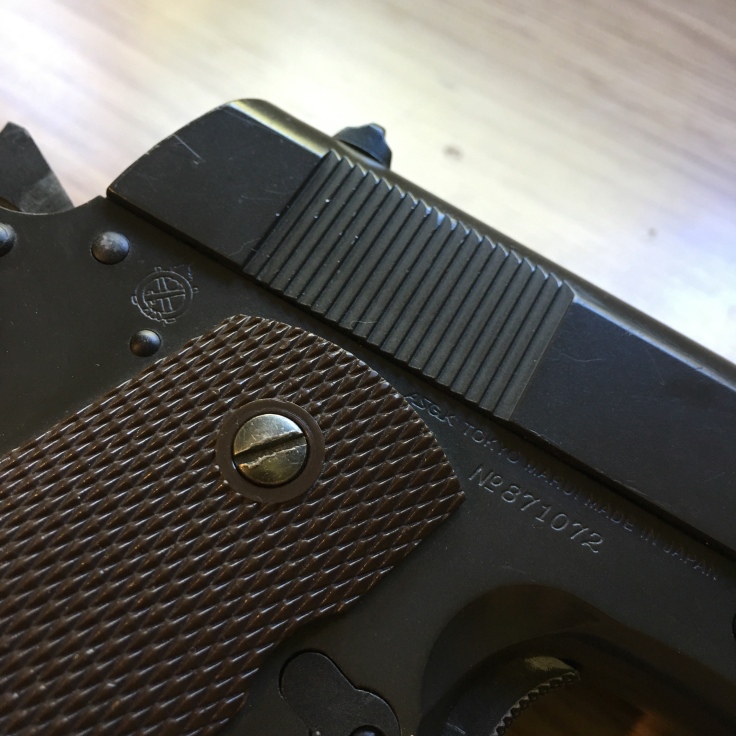 One benefit of a single action trigger is that for the most part they are a lot shorter in the pull and tend to have a nice, easy to anticipate release and reset point. The Tokyo Marui M1911A1 is no exception, It’s as nice a trigger as your ever likely to find in a replica… The 1911 design being a rearward sliding block (as opposed to the more common hinged trigger), contoured to the profile of an index finger and being textured on the face to assist in a consistent index finger placement. Rapid and accurate shots are easy thanks to this design and I’ve witnessed first hand the ability this pistol has to beat most others to that first shot on target.

I’m not going to say the basic sights are a negative point… They’re a fair representation of what the M1911A1 is equipped with but I will say that many people don’t get along with the basic, low profile pin and notch design… although along with the overall slim design it lends itself well to a snag free draw.

The grip is a little smaller than most, easily gripped one handed and for a right handed shooter the controls are well placed for easy operation. With two hands it’s a nice pistol to hold… Although it’s probably because I’ve had such a history with the design that i’m biased to its ways.

The grips are of the brown chequered nylon type that is derivative of later Colt batches, the more common option in the war being dark oiled American Walnut with a double diamond design. They serve well enough but be aware that if your looking to change the grips that as with many Marui designs a lot of the weight is within those grips themselves in the form of metal plates.

The pistol breaks down in a similar fashion to the real deal, pulling the slide to the rear allows the slide stop to be pushed out of the receiver and the slide to then be released off the front of the pistol. The recoil spring and guide rod are then removed followed by the recoil spring plug nestling below the barrel. Then rotate the barrel bushing 45 degrees and pull out the front. The entire barrel assembly will then easily follow which allows for a proper inspection of the hop and barrel. 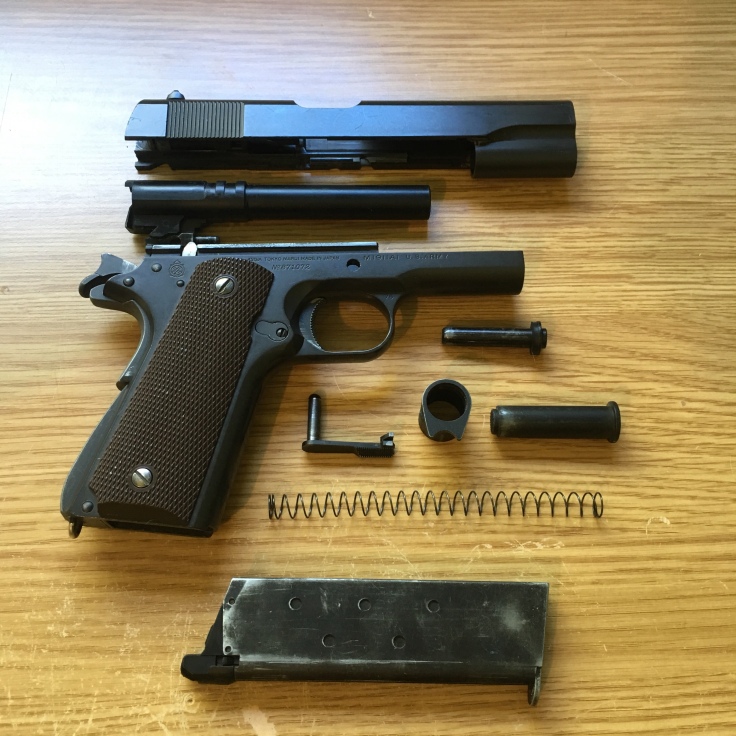 The interesting thing about the Marui M1911A1 is that internally it’s rather similar to the real firearm. Sure… it’s effectively striker fired (owing to the gas magazine design) but the hammer and trigger mechanism are incredibly alike… the same design of spring and sear are replicated (with a little artistic licence) and the safety functions in the same way by blocking the trigger bar from moving rearward. It’s incredible that so many aspects have been able to have been carried over from the original design, but the all important test is how does it shoot?

Range and accuracy are as to be expected from a Marui… In the right hands it’ll shoot straight and true for 50m with the Marui M1911A1 favouring .25 weight ammo and happily run smoothly on Green Gas (despite a fair amount of naysayers who will insist that Marui’s explode with anything more than duster gas in their mags…) A risk I’ve successfully played the odds for nearly a decade with this pistol, the only upgrade being a new barrel and hop rubber a few years ago when I managed to pick up a PDI 6.01 steel barrel for a mere £15…

Upgrades are however rarely going to increase performance much above the stock parts, the PDI and Laylax rubber combination offering maybe another 30 feet of range and a muzzle velocity increase of around 20fps.

The cold… The one question I always get asked. Does it get affected by the cold? Well… Not as much as I’d feared. Certainly less so than metal replicas like the KWA PTP or the diabolical WE 1911 range. But you should be aware that you’ll struggle to get a full 24 shots out of it in rapid succession… It’s possible to get a little extra power with the extended 40 round or M45A1 mags but as the real deal only holds 7+1 you should really be satisfied with the 15-20 shots you’ll get from an average fill.

As for long term skirmishability? It’s probably seen more use than any other sidearm I’ve ever owned. When I got back into Airsoft a fair few years ago it was the only replica I still had and served me well in CQB and woodland games until I managed to get an AEG again. It’s the only replica I own that I wouldn’t bring myself to sell… The only option if it broke would be to replace it with a brand new M1911A1 out of the box.

If your thinking about sidearms and want a classic look with a good all round performance then you’d struggle to beat this model… the Colt M1911A1 is the definition of a classic pistol design and the Marui version is in my opinion the best of the bunch (The KWC 100th Anniversary model being the other noteworthy replica).

So, Don’t be boring and buy a Glock… Remember, If your pistol collection doesn’t contain an M1911A1 it’s not really a collection… It’s just a bunch of pistols.