When people step out their comfort zone, one of two things often happen. Either they fail spectacularly or they become better known for their risky endeavour.

So a couple of years ago, When well known Pyrotechnics manufacturer Enola Gaye started to bring out clothing I’ll admit I turned my nose up a little. There’s more than enough manufacturers offering “tactical” hoodies, caps and gloves without a newcomer trying to grab a slice of the pie.

So fast forward to present day, A good friend of mine called Jack who has had an ongoing relationship with Enola Gaye serving as a brand ambassador at national events (Alongside his own media channel where he gives a glimpse into the world of a serving Rifleman) chucked a box of goodies my way. On top of the expected smokes and thunderflashes there was a pair of gloves, one of two pairs that were surplus to requirements, I opted for the green as it fits better with most of my gear.

First glances at the glove show that it’s better made than you might expect, It’s not simply a generic glove with EG branding slapped on the side. That’s not to say I think a team of boffins developed these purely for airsofters… I’m sure the core glove itself isn’t too dissimilar to others that the OEM might offer for other resellers. 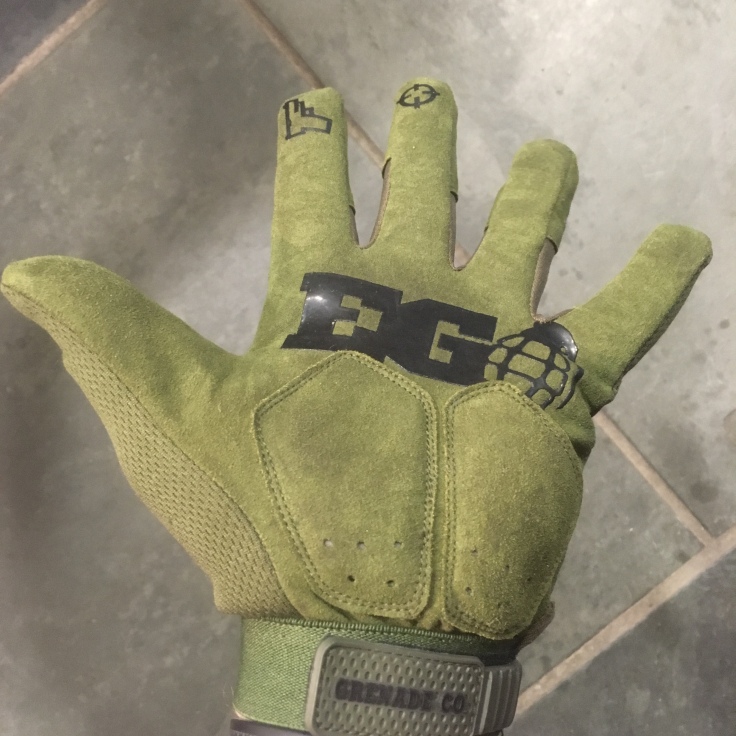 The gloves are incredibly light, Making use of synthetic materials and the overall design being aimed more at dexterity over protection. These have certainly taken a few pointers from other tactical glove manufacturers such as 5.11 and Mechanix. For those lucky enough to have owned them I’d compare these to a Mechanix Fastfit (soon to be reviewed) in terms of dexterity and feel… They’re not identical but it’s pretty close.

The wrist closure is in my opinion a slight improvement on the Mechanix originals as it’s lower profile and uses the standard velcro that isn’t as easily accidentally undone. That being said, I’ll always prefer a full elastic wrist as it offers less bulk in an area that you really should apply a “less is more” philosophy.

The back of the hand is covered by a Lycra panel covered in micro-mesh… Highly breathable and as long as you buy the correct size you shouldn’t get any bunching or excess material. 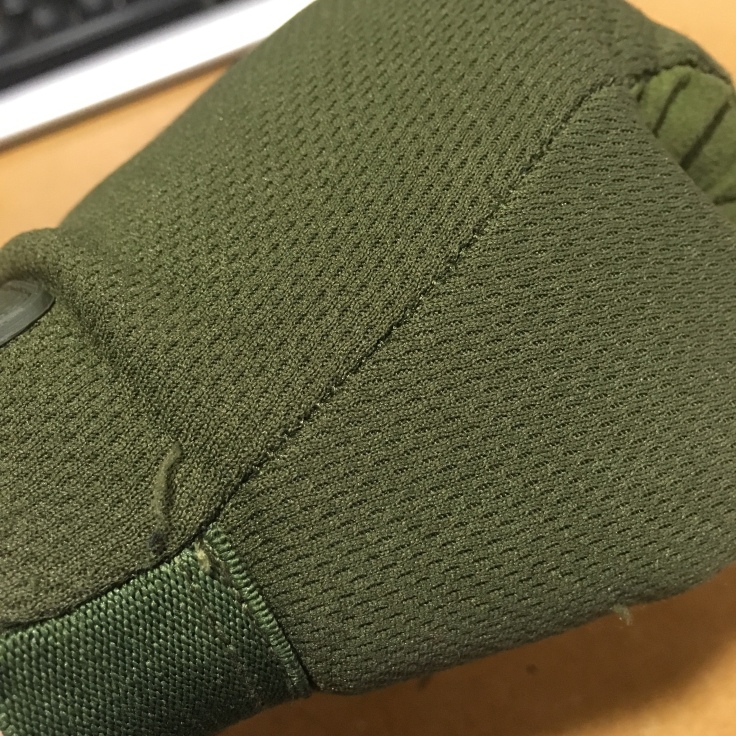 The real positive is in the use of a 2 way stretch tweave on the areas between your fingers, Making this not only flexible but also thin in another area you want the bare minimum.

The rest of the external is made from a synthetic suede leather called Amara, a popular material in motorsports gloves due to its high grip qualities alongside its resilience in adverse weather.

The palm itself is rather interesting, a combination of influences from Patrol Incident Gear (PIG) to Mechanix show in the design of the key part of these gloves. 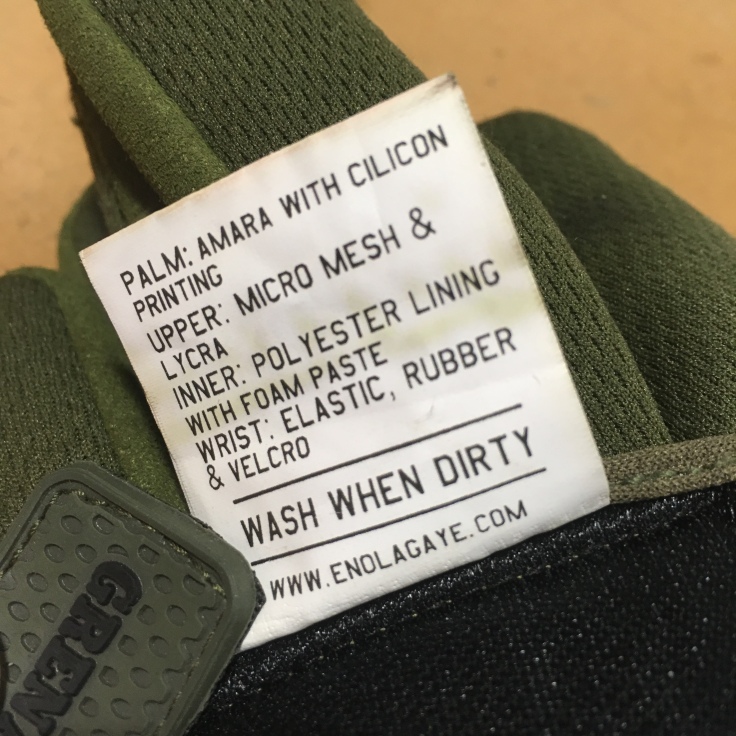 A printed Enola Gaye EG logo in “Cilicon” grippy printed material dominates the palm, Reminiscent of the PIG Alpha gloves that are pretty popular, this offers a rather less grippy alternative but with the seemingly added durability that quite frankly isn’t there with the PIG offering.

The heel of your hand is cushioned due to a twin padded section which is filled with a thin layer of “foam paste” which has the feel of a computer wrist support albeit in a very low profile form. 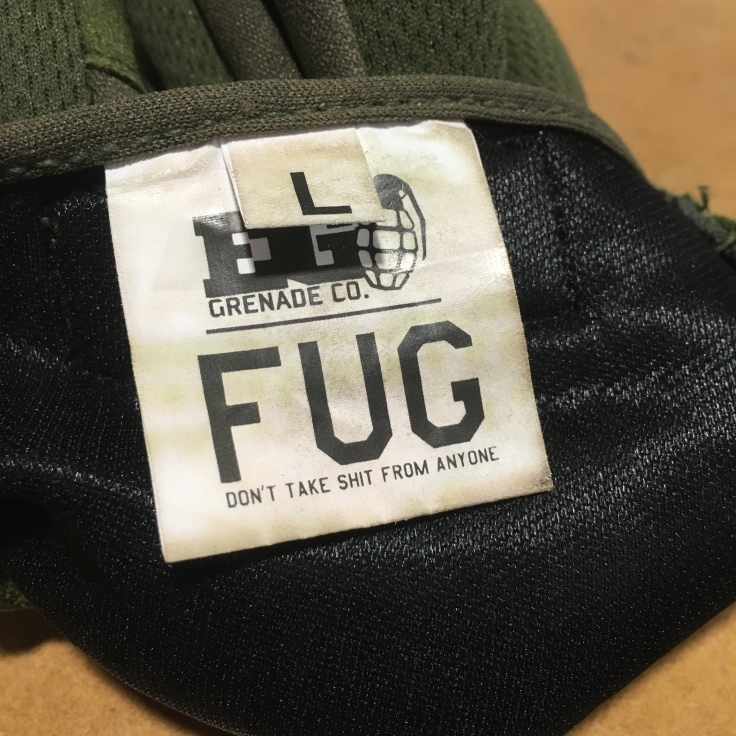 The gloves boast that they are touch screen compatible, in practice it’s not all that great and it’s generally a lot easier to either ask SIRI to complete a task or just remove the glove. 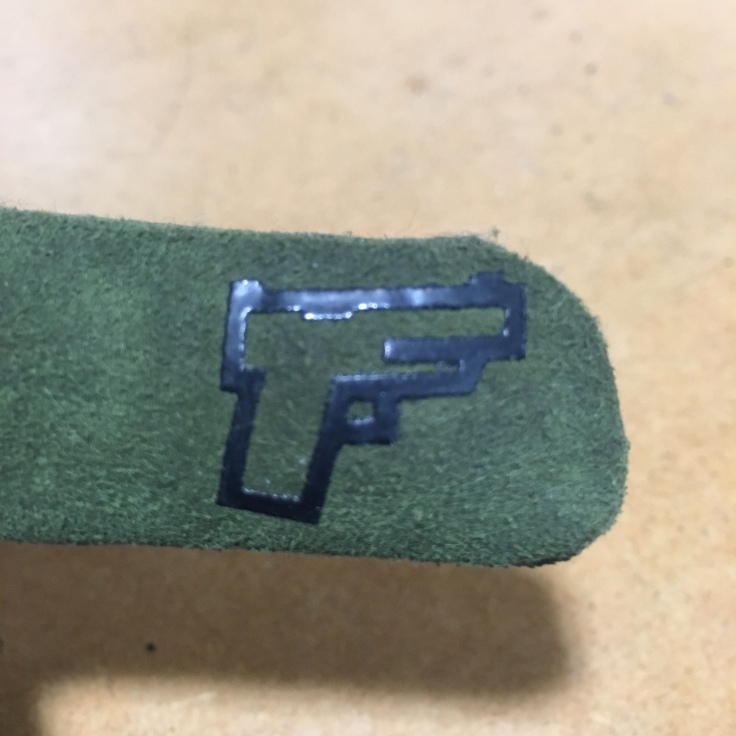 So… Big question, Would I recommend it over gloves by PIG or Mechanix etc? Probably not… Whilst I actually like parts of their design and I’m sure they would work very well for their intended use I’m hesitant to wear an airsoft only brand when I naturally gravitate towards rear tactical gear whenever possible. Snobbism? Possibly, I guess that depends on your viewpoint. But consider this… I bought a set of Mechanix Fast Fits for £12.74 from Tactical Kit only yesterday. Admittedly on a 15% promotion, but even at the usual £15 and with a usual £5 delivery fee it works out the same as the FUG gloves £20 retail price.

Also, a pyrotechnics company selling gloves? I’d have expected them to be fire resistant as a bare minimum. I’ll be using these for work as it’ll get a proper beasting, That’s about as good a compliment as I can give it… A reasonably good glove overall but in an already established market with no discernible unique selling point.