I’ve been relatively spoiled with holsters over the last few years, From my early days of using a Blackhawk omega drop leg and later on using rigid holsters such as the wallet friendly Fobus and iconic Safariland 6004…. To now having a collection of holsters to suit different occasions, I’d say I’ve had more than my fair share of holsters, probably due to my near obsession with pistols and seeing mags get lost.

Recently… Well, over the last 3 years or so I’ve become more focussed on buying higher end gear, clothing and tactical gear… It’s not always affordable or available but I’d like to think that my loadouts would be workable in the real steel shooting world.

Holsters are in my mind one of the most vital bits of gear I carry as part of my loadout… you can debate whether or not a sidearm is essential, but if you have one it’s important to have it held in a suitable holster.

A holster should provide a secure and easy to access means of holding a pistol, it shouldn’t be overly bulky and shouldn’t prove difficult to reholster your weapon. It needs to be durable and able to take the brunt of an impact against a doorway or vehicle hatch. Your weapon shouldn’t come out until you want it to and also it shouldn’t make any noise once the weapon is in place. But it should also allow a relatively simple and quick draw to enable your sidearm to be quickly deployed.

Not an easy set of criteria to live up to, I’ve certainly seen a lot of holsters fail to meet some of these measures. A key one is often that a player has such distrust in their holsters ability to retain it safely that they will carry a pistol without the magazine to prevent it coming loose and falling out. This might be acceptable to some people but I carry my pistols ready to shoot.

When I asked Ryan from Backcountry Workshop if he’d be interested in an interview, I was greeted with an enthusiastic yes… Its always nice to see the other side of an airsoft manufacturer. I’ve been lucky to meet people behind a fair few manufacturers and organisations and despite some of the negativity that the airsoft community seems to love dragging itself into, the guys who make a living from airsoft usually are really affable people. Ryan is no exception, I went round to see him a few weeks ago to conduct an interview… Occasionally I like to do a Q&A with certain people in the airsoft world, some you might have heard of… others you might not have.

As part of the interview he wanted to provide me with a holster ti review later down the line and to give a little more insight into the business, a nice touch and not something I asked for or expected. However, I’m not one to turn down the opportunity to review something from a new business and given the fact that at that time I had nothing suitable to holster my new Glock 19 in, I asked for a low profile Kydex holster for that particular model.

I actually watched this holster take shape from its origins as a sheet of Kydex through to it being mounted to my Safariland QLS. I certainly had more input into its design than most things I’ve reviewed but that’s the nature of a custom holster… you supply the requirements and the manufacturer builds accordingly.

I’d asked for a non-light-bearing holster to fit a Tokyo Marui Glock 19 with a low profile signature but to be mounted on a Safariland pattern mount. I was certain that Backcountry only did IWB (in waistband) holsters or blackhawk/bladetech mounts so I was ready to accept that but had brought both mounts just to see if he could do it for me. I was pleasantly surprised when he said it was no problem and that he can cater for most industry standard mounts.

Being left-handed can be a major issue for holster shopping, right handed “normies” don’t appreciate that you can potentially pick up a good Safariland 6354do clone for a reasonable price… Hell, a real one is possible to find if you know where to look… Tactical Kit UK look after us Southpaws as best they can, but finding a suitable holster second hand to meet the above requirements in a left handed configuration? Forget it. It’s very rare you’ll find a good left hand holster on eBay and when you do the price is often inflated due to lack of supply and weirdly enough… increased demand.

It was this left handed requirement that actually steered my towards my first kydex holster… Funnily enough also for an airsoft Glock. The Tokyo Marui Glock 17. I’ve still got the holster but it’s a light bearing one that’s tailored more for “duty” or overt carry, the one I’d asked Ryan to build would be for a lower profile loadout.

Either straight up woodland games where the light isn’t a requirement and also for when I’m using the holster whilst at a role-play event I wanted something that I could conceal under a jacket etc. 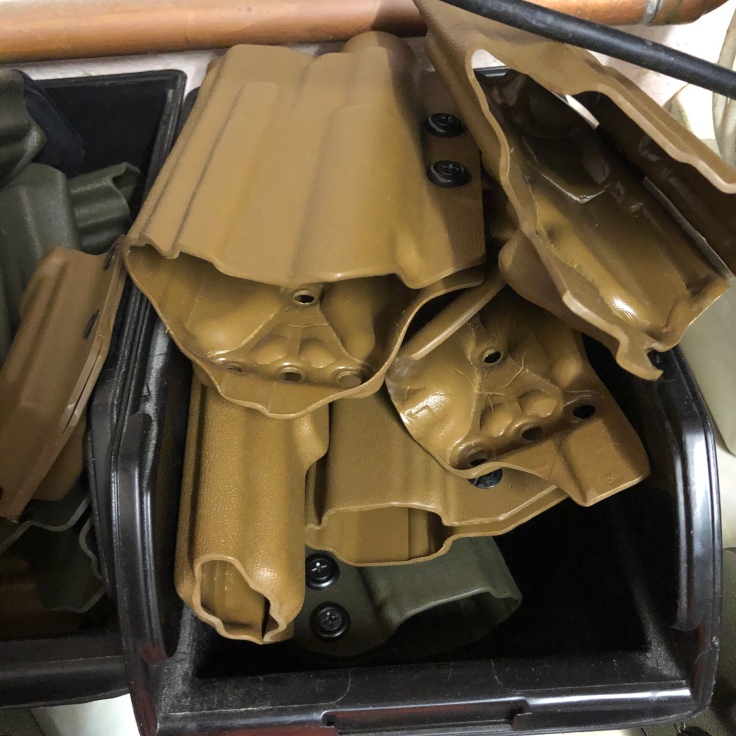 One if the first things I noticed about the Backcountry holsters is that the retention is fixed at the point the holster is manufactured and the holster held together with a pair of eyelet type rivets, it’s very important the note that custom holsters are much easier to calibrate with the pistol on-site with the holster maker.

Whilst my holster was being made I saw a number of other modified glocks, 1911s and USPs awaiting their turn for holster making, each one having its own considerations with not only the end users requirements but also based upon the needs of the pistol itself.

Going back to the retention, it’s mechanically held by the holster retaining on the trigger guard. Once enough force is applied to the pistol, the Kydex has just enough flexibility to allow the pistol to release. The retention points on the holster are around the front of the trigger guard, a subtle amount on the rear of the guard and to a lesser degree, the frame around the disassembly catch.

The other features of the design are the sweat guard on the side that faces the body, formed not just to protect the weapon itself against sweat and moisture but also to act as a good indexing point for re-holstering. Its shape also helps keep a shirt or jacket held away from the holster to prevent fouling, something that can be a pain in the ass during transitions and lethal in a gunfight. 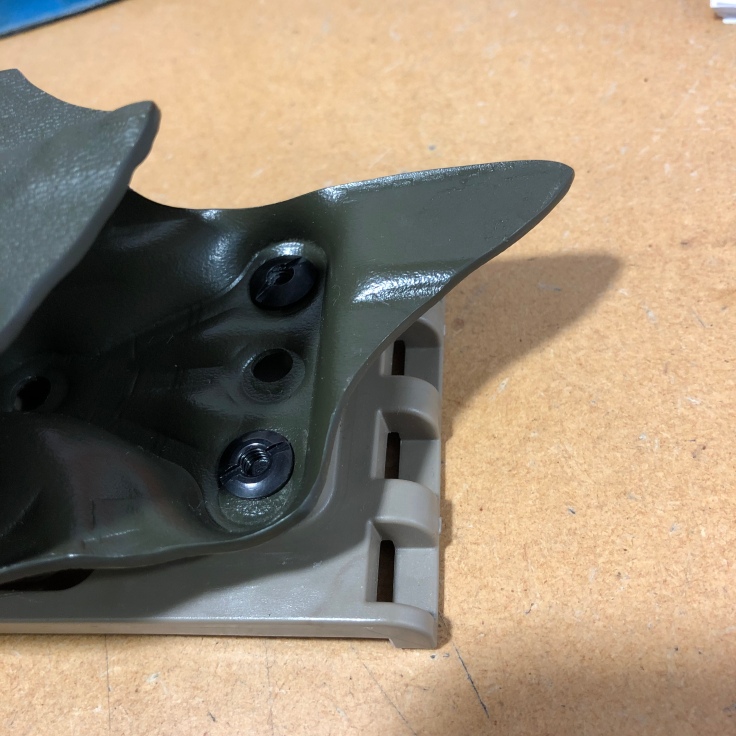 The muzzle is open, as per my request. I’m considering a “comp” or a threaded barrel on the front of my 19 so an open holster is vital to allow me to go down either route later on. The sight channel is deep and should allow the fitment of high profile “Suppressor” sights such as offered by trijicon, it also doesn’t do any harm in keeping the top section rigid.

As for actual strength, the holster is formed with plenty of structural support. The Kydex is thin Compared to an injection moulded holster at about 1.6mm which allows for a good forming around the pistol but despite this apparent fragility the holster is solid. The shape of a Kydex holster is what gives it strength and the shape in this case certainly feels rugged enough to exceed my needs.

The outline cuts made to a Kydex formed holster are vital to its design and decide how well it does it’s job, too high and the pistol is tough to draw, hard to re-holster and overall not really fit for purpose.

The same follows for it being cut too low, as a bare minimum the trigger should be absolutely covered to prevent an ND (negligent discharge) from taking place. The cut of Backcountry’s holster is just about right, it falls in the Goldilocks zone of covering the entire trigger guard and preventing the magazine release from being activated whilst the cut is positioned to create a slight flared effect around the trigger guard and frame for re-holstering. There’s nothing unnecessary on this design and it’s definitely a function over form design, but at the same time it’s aesthetically pleasing to the eye.

I’m very much used to having a hooded holster and my major concern was that without the hood I’d be forever losing my sidearm, those fears were unfounded. I spent a whole day running around Spartan Airsoft like a loon, not once did I feel that the pistol was insecure. Ryan is t a big fan of the “hold it upside down and shake it test” but it does pass that one with flying colours. This holster will mostly be used in a rural environment so retention is my primary concern, but based upon what I’ve experienced so far I wouldn’t hesitate to use this again in outdoor events.

The mounting option I’ve settled for is the Safariland triple hole configuration, this allows it to work well with my existing UBL offset mount and integrate with the fantastic QLS locking system.

There’s a lot of mounting options available… the Safariland might not be the cheapest but I like being able to remove my pistol holster from my belt line with minimal effort and without disturbing the belt itself, one of the little things you find yourself having to do if you own a half dozen or so pistols.

This holster is a bit of a unique item for me to review, I was present whilst it was being built so it has a connection like no other piece of gear I own. I know Ryan wasn’t 100% happy with it but I feel that his perfectionist personality coming through more than anything, I’m chuffed with it. I’ll be wrapping this in Gearskin pretty soon (which I’ll cover in an article), not because I don’t like its lines but the nature of a covert or rural holster means that a fabric wrap is desirable over bare Kydex.

Would I recommend Backcountry Workshop over other, more established holster makers? A tough decision! Ryan’s been making holsters long enough now to have moved through the inevitable fuck up period that all businesses go through, I can’t fault his workmanship and judging by the recent amount of business being put his way through word of mouth I’m not the only one.

I’d liken choosing a holster to choosing a car… Some people like Porsche and some people like Ferrari, either way you’re going to have a very nice end product. There are a lot of people trying their hand at Kydex but it has a steep learning curve… I’ve had a go and it’s a pain in the arse, you need to have the technical ability and also the right equipment to make holsters that are fit for use, Backcountry has both.

The pride and workmanship of Backcountry Workshop means that his designs are always evolving and I’m eager to see what he adds to his lineup over the coming months! If you’ve got a question or would like to know what he can do, you’re best off hitting him up on his below IG whilst his website is under re-development.