We have a real obsession when it comes to optics in Airsoft… we’re always trying to get the best bang for our buck whilst striving for something that looks like the real thing and won’t fall apart the first time it’s used… Probably why we’ve put up with clone ACOGs with shitty eye relief for so long.

Whilst with the average AEG you can get away with a £20 Aimpoint T1 clone but for a GBBR or pistol mounted optic you really need to be looking at something purpose made for that kind of abuse. Something that unless you spend a fair amount of money you’re simply not going to get. 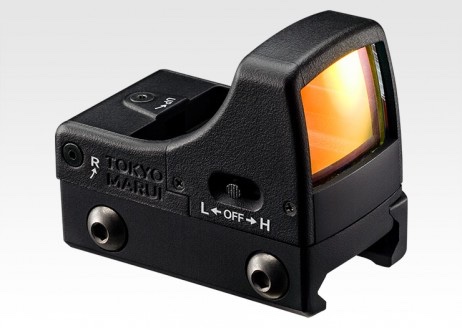 So when Tokyo Marui released their Micro Pro Sight a while back it was welcomed by those of us who were looking to mount a micro red dot on a pistol without having to resort to the higher cost of say a Trijicon RMR, Docter MRD or Vortex Venom. There’s a lot of questions people have about red dots on pistols but it all boils down to two main questions.

Is the sight picture clear and usable and just as importantly… Will it hold zero under heavy use and therefore a usable option for pistol shooting?

Well let’s have a look at what you get with the Micro Pro and run through a few things I’ve found whilst using it on my FNX 45 (Recently reviewed here).

In the small retail box you get a rather funky looking micro red dot sight, much to the same aesthetic design as the Docter Red Dot Sight which is pretty much one of the two major players alongside Trijicon’s RMR in the micro dot sight market. The sight comes with its own low profile 20mm Picatinny compatible mount and also a small bar of accessories which includes all required Allan (hex) keys to not only fit the sight to your replica of choice but also replace the CR2032 cell and adjust the sight’s windage and elevation.

The included mount is perfect for setting up the dot on a PDW or Shotgun such as Marui’s MP7 or Remington 870 Breacher… The latter really not needing a sight but it looks cool nonetheless.

You can also grab other mounts for certain Marui pistols such as the Glock and USP range, A generic high mount for long guns (an ugly as f#*k option in my opinion) and you can directly mount the sight to the slide on the Marui FNX 45 (currently the FNX 45 and the Hi-Cappa DOR are the only 2 models able to do this but expect further compatible pistols soon). 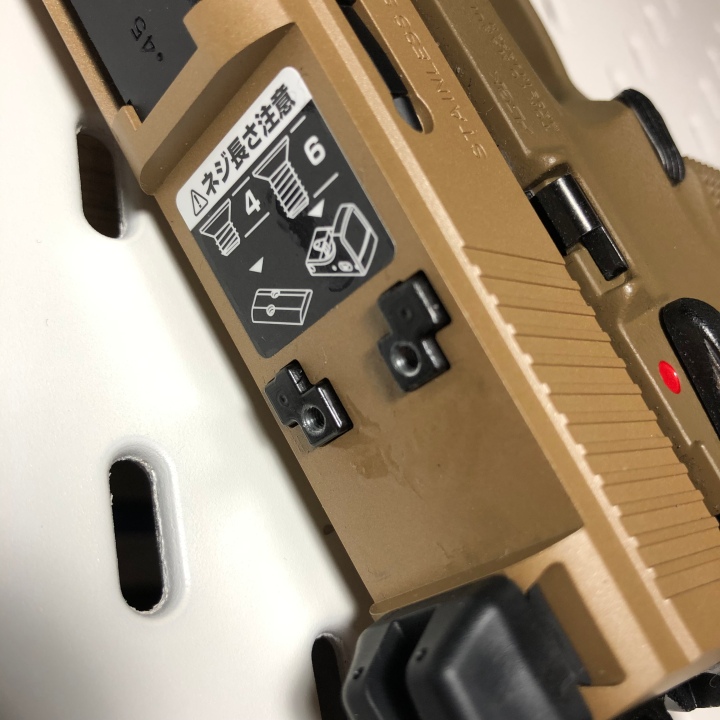 The dot sight has a switch on the side to switch between off, low and high power modes. This is better in my opinion than those automatic light sensor red dots you often see at this end of the market but it does have its own drawbacks…

For low light shooting I’ve found the low setting to be too bright, I’m not particularly fussed by the size of the dot (although it’s probably around 15 MOA) but the brightness combined with the dot’s irregular shape and large size causes it to be less useful than regular tritium or glow in the dark powered iron sights in certain situations.

The high setting works pretty well in daylight, although in my opinion the main purpose of a dot optic is to assist shooting in sub-perfect situations such as transitioning indoors or during the hours of darkness.

Ghosting and refraction of the light source is pretty apparent around the edge of the sight window, certainly at the higher setting but it doesn’t make the sight unusable. Unless you’re willing to pay a fair amount of money it’s always going to be something you have to deal with on budget optics.

The dot itself isn’t the clearest in the market and a simple high/low power isn’t ever going to give you the best dot picture unless you’re very lucky with where you use it. I’m pretty sure it isn’t down to any astigmatism in my eyesight (the dot in my Vortex Strikefire and Holosun HS403C is certainly a lot crisper). 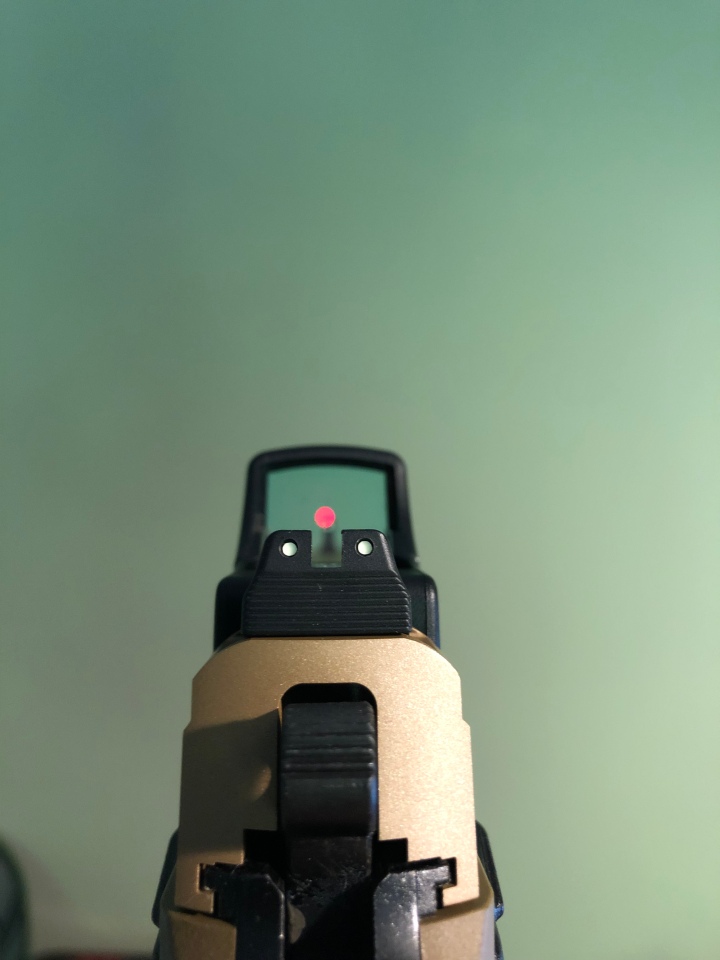 The “glass” of the optic is also on the lower end of the quality spectrum, it’s usable during the day and in some low light areas but it’s far from why I’m used to (albeit with higher priced sights). 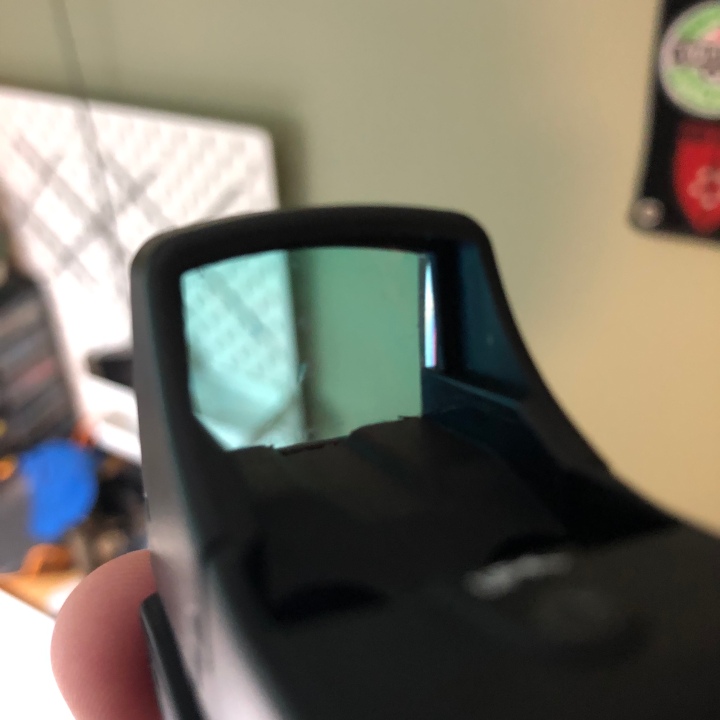 The body of the sight is surprisingly rugged but don’t have any illusions about it, a sharp knock is likely to cause your sight to lose zero or even potentially be damaged. This sight is primarily designed to be light and take the punishment of being slide mounted, not being dragged along the dirt sideways and bouncing off door-frames.

There is an included protective cover for the dot which handily will fit the sight whilst it’s mounted onto the FNX 45, although in game it’ll just get lost so I’d suggest you leave it in the gun box. 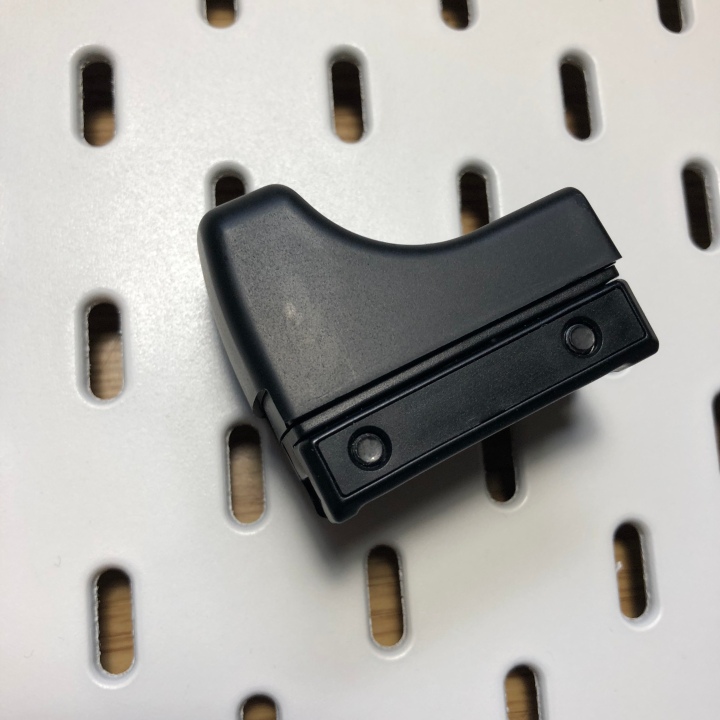 The sight takes CR2032 cells which are the industry standard for this type of application, the battery can be changed using the included micro screw driver which looks more than sufficient for the job (It’s worth adding a decent set to your tool kit). 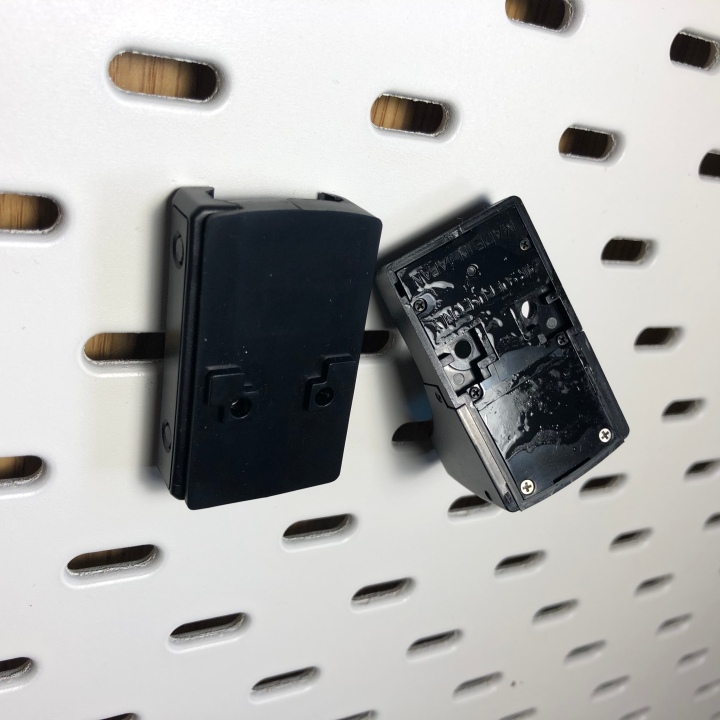 One thing to note she. Shooting with a red dot is that the dot tends to “bounce” around inside optic, this is down to a phenomenon called Parallax Shift, with a budget dot sight such as this its particularly noticable… if you were to shoot using this sight and then immediately after start using a dot sight such as the aforementioned RMR, you’d soon appreciate why one is £60 and the other is £600.

Onto mounting, if using this in one of Marui’s other pistols such as a Glock there are mounts available to act as a bridge between sight and pistol. However, some of the Marui sight mounts are questionable to say the least in their design. I was hoping to mount the dot to my Glock 19 to see how it looked but the sight mount is designed to hook over the rear of the slide and looks bloody odd to say the least, it’s quickly found its way into my “shit for sale bin”. A lesson on maybe actually doing some research before adding to cart, although I can’t see this design being popular with those looking for a realistic mounting option.

So, this review appears to be highly negative about this dot sight in general… It’s really not as bad as I make it seem, I just feel that next to a real steel optic it’ll end up completely outmatched. The main consideration is that the sight does what it says it’ll do, it holds zero firmly despite my best efforts to knock it off course… It’s also capable of being used for pretty accurate shooting once its dialled in, certainly during daylight hours it’s a great sight to use. Durability wise it’s passing the test so far, I do look after my stuff but I’ve given the sight a couple of accidental love taps against the odd wall and doorframe and it’s kept on trucking…

There are certain things it’s not ever going to be good at… Night shooting being one of them. If you want to give yourself a fighting chance at night, use tritium sights or a higher quality optic. If you want something to mount to your pistol without impeding performance for shooting during the day… this might just be the one for you! One things for sure, it looks shit hot on the FNX 45 and until I can bring myself to spend silly money on a real steel pistol optic, the Micro Pro Sight will stay firmly on my FNX 45. 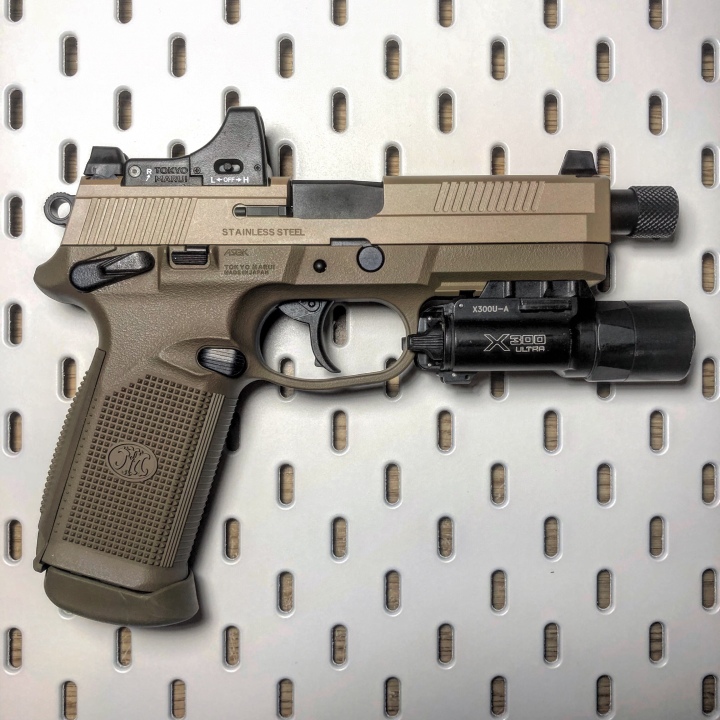