Gloves! Just when you thought I’d finished yapping about bloody gloves! Having said that, It’s a review I feel is timed about right… I’ve been using the reviewed pair of fast-fits for about 6 months now and despite my previous mishap with a pair of Fast-Fits I’ve now got a better idea of their overall ability and durability.

So the Mechanix fast-fit is a glove that is designed to be quick to put on and take off, that much is pretty obvious. It’s priced at what I’d call the mid to low end budget of the tactical glove market, you’ll spend about £15 for what is one of the more iconic gloves in the market, sure… The originals are what’s most often seen in the big screen but in the real world it’s very much users preference.

I actually picked my gloves up on impulse, Tactical Kit we’re running a mid-month promotion that made the gloves work out about the same price delivered as I’d pay for a pair of my usual work gloves. Wanting to try these out as an all round glove for work (occasionally lifting heavy, sharp items and operating machinery and tools) and at home I’d decided to spend a little money to bring a little tactical gucciness into my work life. My originals (Reviewed Here) being a nice colour (foliage green/black) and impossible to source now I’m hesitant to put them to hard work.

One of the very first jobs I put my new gloves to was ripping out concrete rebar from my garden, we’d had a rough few days and my fence had given up the ghost and decided to disintegrate. Not one to pay others to do a job I can do myself, I decided to completely defence my garden. Not an easy job but I reckon I saved about £200/£300 in labour costs and have a surge of pride when I see that bloody fence every day…

The gloves didn’t last long if I’m honest, after a few hours of backbreaking work, digging up the existing fence posts and concrete blocks (mixed in with some good ‘old fashioned rebar) is managed to rip through the gloves in a couple of places on the index finger.

Now to be fair to the glove, they were not designed for that level of punishment. Landscaping and fencing is a real back breaker and it’s tough on the hands. If I did it as a full time job I’d buy gloves to suit the work, but one key point I’ll make is that despite a few nasty bits of steel poking into the palm, the gloves protected my hand.

I wasn’t happy initially, I figured a glove should handle more punishment than a bit of gardening. But looking back it was tough enough work to destroy 2 shovels, a trowel and nearly end my impact drills life so with all things considered, they held up as well as could be expected.

It didn’t stop me from claiming under Mechanix’s warranty though, after some talking with Tactical Kit they agreed to send me another pair as a goodwill gesture (they would have absolutely been within their rights to say no as the gloves were not being used as intended) but they made me promise that I’d keep them out of the garden.

The pair they sent as a replacement are the same pair I’ve used on a daily basis at work ever since.

Before I get into the details of how they’ve fared, let’s have a quick look at the gloves themselves. Bear In mind that the gloves are not brand new, there’s a degree of dirt and wear on the gloves pictured but as a consumable item, you have to appreciate that a glove isn’t going to last forever.

The glove is a fully synthetic item, meaning that it won’t fall apart and rot in the jungle, equally it should retain its characteristics when wet or dry. The palm is made from a synthetic leather, 0.6mm thick and with a surprising feature… touch screen capability.

The two piece design helps ergonomics and keeps the material from bunching up (a massive issue that causes a loss in sensitivity and dexterity.

The back of the glove uses a material called Drytek, a moisture wicking material which can also be printed in a pattern such as Multicam or as seen on these, M81 Woodland.

The Fourchettes (or inter-finger webbing) are an unusual design, the outer edge is made from an ultra fine mesh for dexterity and breathability whilst from the second knuckle outwards, the glove uses a panel of the same synthetic leather as the palm. 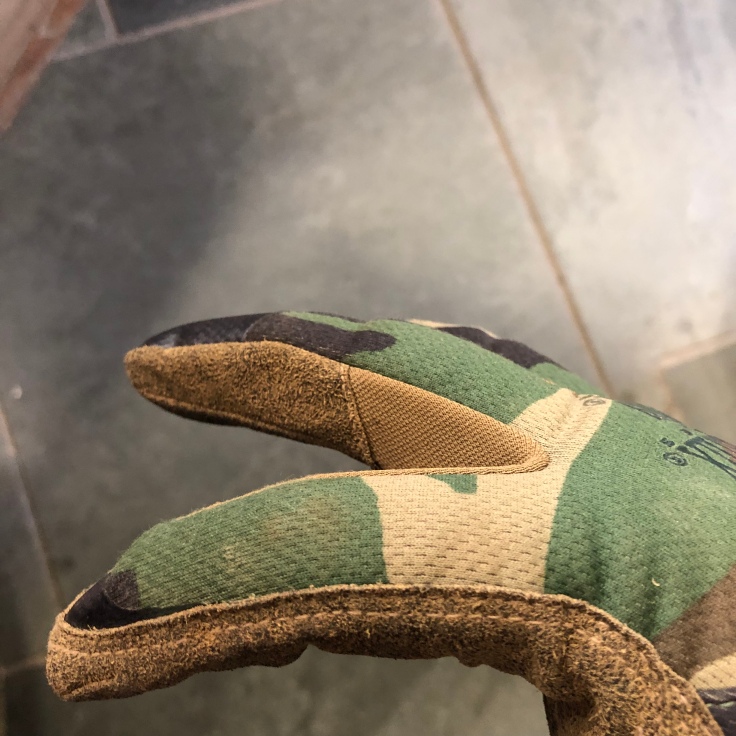 The cuff is longer than that on the originals, designed to facilitate quick donning/doffing of the glove it’s main source of securing to the wrist being a ring of elastic about an inch from the hem.

This helps keep the glove in place but without any of the bulk you’d get when using a Velcro closure. This one feature is the key difference between this and the originals and probably a major consideration when choosing your gloves. 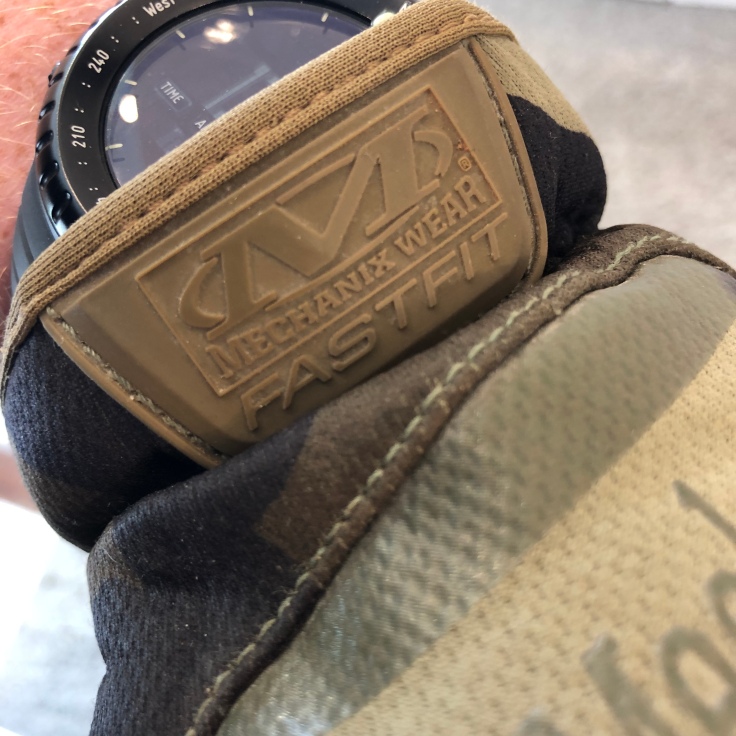 The gloves also feature a hanging loop, an invaluable feature and one I use on most of my gloves. these have a nice extra touch in being branded with the manufacturers name.

The open cuff design can make this glove a little more awkward when wearing them alongside a watch but there is a trade off, a degree of protection is offered to your wrist mounted timepiece by the glove itself.

So the main thing I wish Mechanix could change is the way the fingertips themselves are constructed, a seam line runs around where your nail is located, this causes a degree of nuisance and any imperfections in the seam are exponentially felt by the wearer.

A fold over fingertip such as used on Patrol Incident Gear’s Alpha (Reviewed Here) and Delta (Also Reviewed here) glove ranges would be a welcome addition and would certainly put it nearer to the PIGs level of comfort. As you can see from the inside of the glove, it’s relatively well put together aside from this one design drawback. 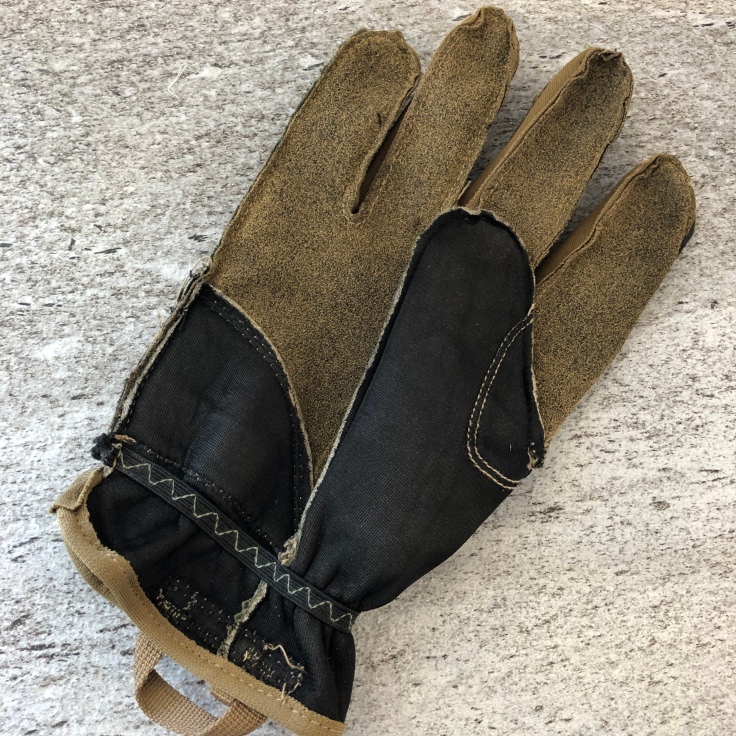 So how are my current gloves faring? Well not too bad actually. I work in a small independent business where I chip in with everything from driving one of the fork lifts to delivering locally as needed. My primary role keeps me in the office dealing with the more mundane buying/importing/selling/exporting side of the business but having only 10 colleagues in the entire business and with one other guy under 50 besides myself, there’s a degree of manual handling involved.

I keep these gloves on my desk next to a high-vis and a lock knife… they’re convenient and quick to put on, and I don’t need to worry too much about my watch getting in the way of my work due to the cuff protecting it against knocks and scratches.

Would I trade in my PIGs for Mechanix on the Airsoft field? well not for day to day gaming… I love my Alphas and Deltas, but that’s not to say these are a worse choice. PIGs are a more expensive option and gloves are (and I’ll keep saying it) a consumable item.

If I was playing an impression such as early GWOT or a specific film such as American Sniper I’d make the jump without hesitation… The originals and Fast-Fits are a capable glove, I’ll also replace my current pair of fast fits with another once these have run their course… With all due respect, I’m not wearing £50 PIG Alphas in a warehouse.