As a foreword of sorts to the review, I’ll give you a little background on my experience with Inforce’s WML range. I’d previously owned one of the original IR/White Inforce Weapon Mounted Lights (WML) a couple of years ago, having bought it from a good friend of mine.

Whilst I was conscious that I was merely using it for Airsoft, I was still baffled by the venemous hate that this unique looking light appeared to get from some areas of the American shooting community.

It appeared like a well made and well designed light from my point of view… However, it just so happens that the issues were very real and rooted deep in its construction.

There was certainly a combination of brand loyalty mixed with with more than a pinch of “I’ve heard they’re shit so I’ll repeat the same message” that was making its way around the firearms forums, but at its root there’s no smoke without fire and Inforce had a problem on its hands with their WMLs.

It has been documented that there were issues with the polymers used on the early WMLs, the main one being that it was brittle and caused breakages with many units under drop tests and even recoil.

How much of an issue this was I do not know… One things for sure though, there is more than a little distrust in Inforce’s unique design in certain circles and some serious work needed to repair their reputation amongst certain shooting communities. 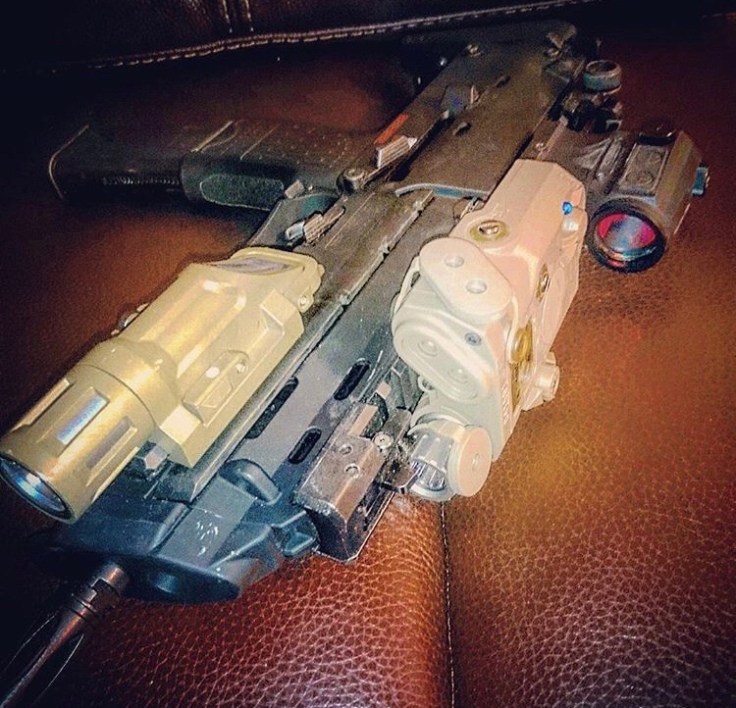 So why would I invest my money on a design that apparently has had such significant flaws in the past? Well, when reference pics came up with the second generation WMLX being used on UKSF rifles (Follow the links for The Reptile House’s “Seen In The Wild” and WMLX V2 Review, also check out The Misfit Society for the original pics) I was intrigued if they’d finally overcome the issues that plagued the original WMLs, certainly from what was being said it appeared that the newer version didn’t suffer from the same issues. 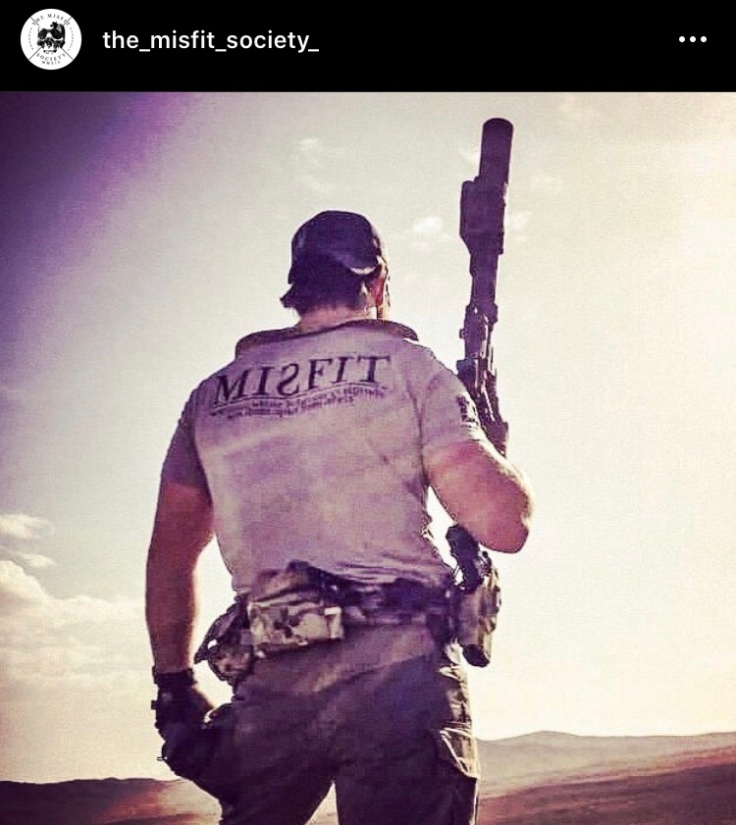 Add all this to to the fact that I’d literally sold the original WML a week or two before starting ATRG, it felt a little like an opportunity to finish unfinished business.

So, first impressions? Well it’s a small form factor light, anyone whose owned the original will be happy that they’ve kept the format similar and managed to not add anything in terms of bulk.

Coming in at under 3 ounces (85 grams) it’s an extremely lightweight weaponlight, certainly the lightest I’ve used.

The light itself is comprised of the following parts:

The controls are very simple to use and even those who have never used the WML series should find it easy to get to grips with their Gen 2 WML.

A rubberised grippy On/Off button angled on the rear of the light is your primary control, this button allows you to access the three following light modes:

The WML also has an InfraRed (IR) option which is selected via the throw lever on the side of the light, both momentary and constant modes are available in IR but the strobe function is not carried across.

One of the main benefits of a dedicated switch between White and IR is that there is little to no chance of accidentally turning on White light when you’re attempting to remain on IR only.

The WML is unusual in that it has two safety features to prevent negligent discharge of light, both are physical safeties and can easily be checked manually, even in zero light conditions.

The first is via the head itself, a 1/4 turn of the light bezel will prevent the light from being able to switch on. Mostly for travel and storage but also useful if going completely “passive” and you want to avoid the slightest chance of a light ND. 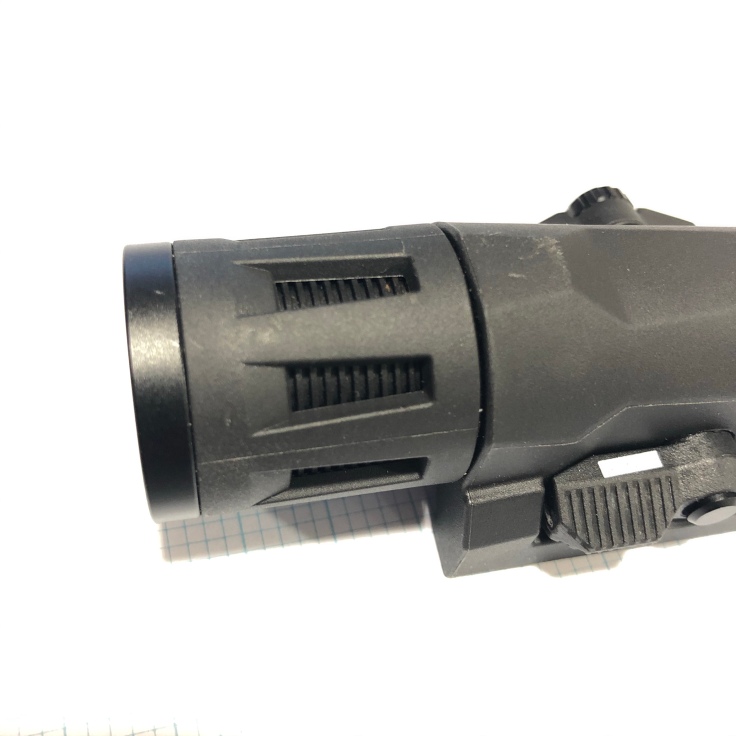 The second safeguard being a flip up type safety, one that can be used to cover the on/off button. Whilst it doesn’t completely cover the switch, it does prevent you from pressing the button unless you either flip it out the way or try very hard to work your finger under the guard. 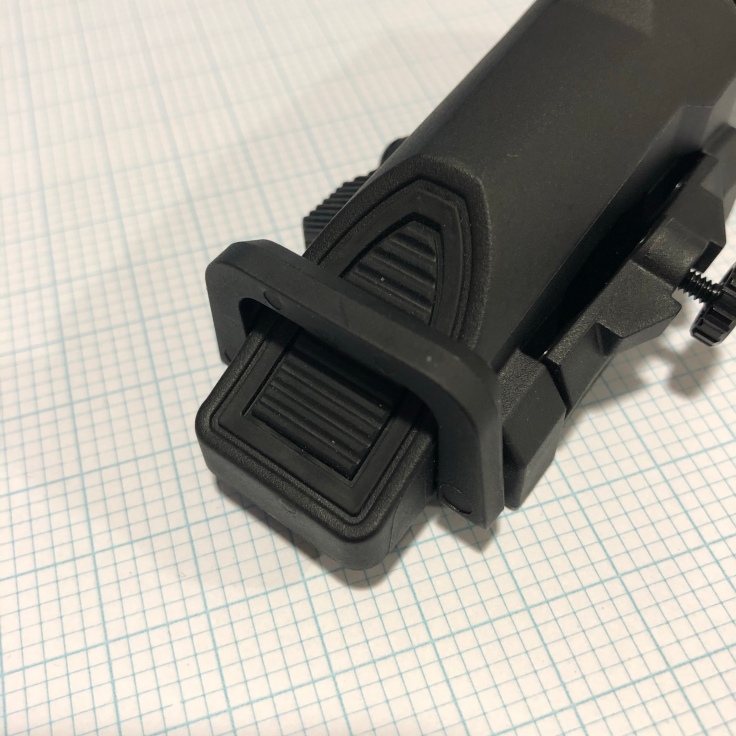 Whilst we’re taking about safety, I couldn’t find the specs on the strobe mode so I can’t be sure if it falls into the range that could cause those with Photosensitive Epilepsy to have a fit.

The strobe does appear to “phase” by going up and down in its frequency which could be problematic for some people and yet not for others. I’m not a massive fan of strobes anyway so have disabled this feature as it only adds the potential to put the light in a mode that I feel doesn’t add a tactical advantage.

Disabling the strobe mode is very simple, firstly you turn the head of the light to its “lock-out” 1/4 turn setting and then whilst holding the main button in, rotate the light head back to its main position.

The main light is set at a fixed output of 400 lumens, it’s bigger WMLX brother having a whopping 700! I figured that for use as a navigation and occasional offensive light that the 400 lumen model (paired with its shorter profile) would be a better choice.

The IR element is rated at 100mw in power which appears to put out an equivalent amount of IR light, there is no data concerning the actual IR bandwidth used but it will light up IR reflective material (which some “near IR” filters and lights will not). There is a barely perceptible purple/red glow from the four individual IR LED emitters but unless you’re wearing NODs or under 3 feet away, you’re not going to see it. 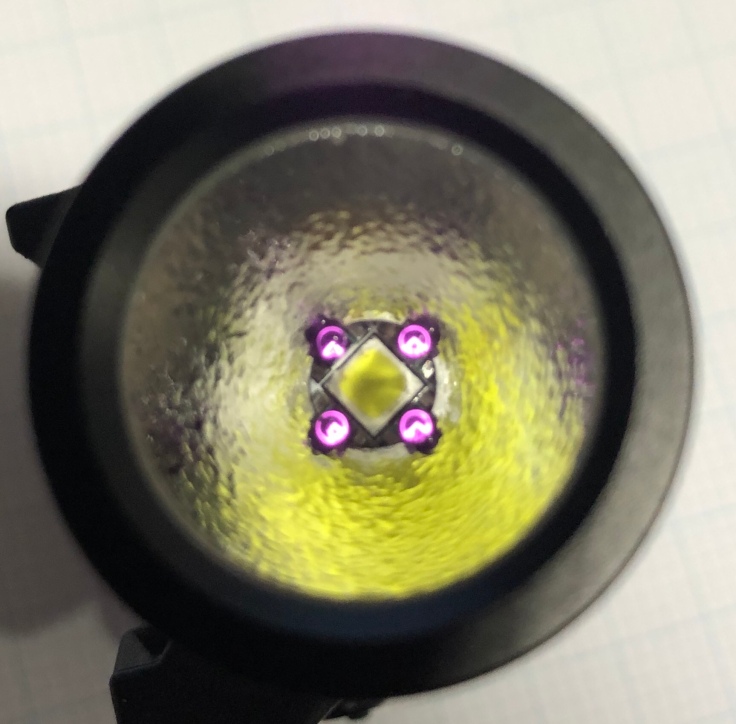 The light is designed to be attached to a section of MIL-STD-1913 (Picatinny) Rail via it’s built in clamp, unusually it’s tool free and built into the lights body meaning that you cannot directly mount it to anything such as Key Mod or M-LOK without first attaching a section of rail.

The clamp has a captive locking bolt with an oversized thumb wheel, perfect for securely retaining the clamp and preventing unintentional release. By loosening the captive bolt you’re able to open the clamp and either install or uninstall the light.

The locking bolt itself merely prevents the clamp from being opened, but doesn’t itself form the primary attachment to your rail. This means that even if the bolt becomes loose, the light itself should still be held firmly in place by the clamp. 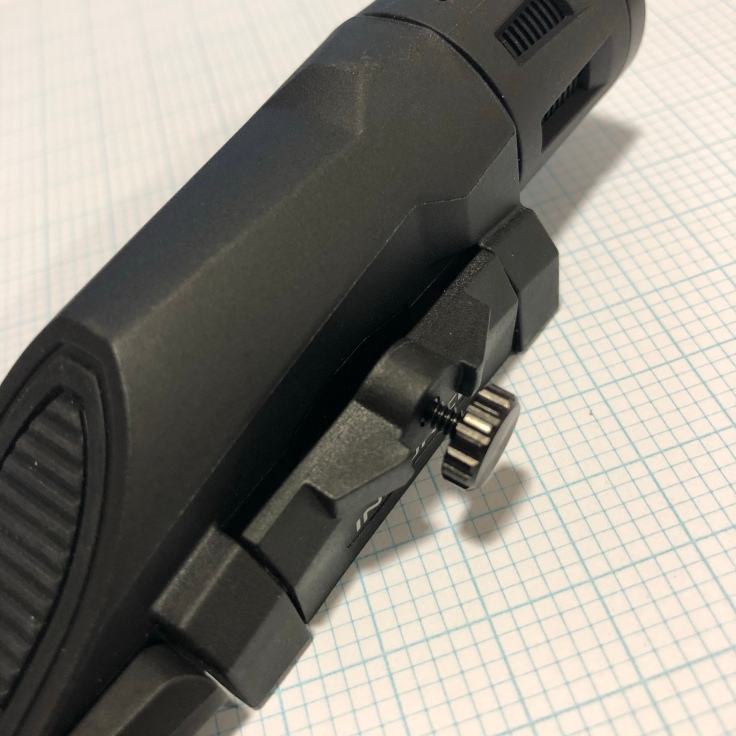 The head of the light features a series of heat sinks cut out of the polymer that covers the bezel, this is pretty compulsory in a light that outputs such a high amount of light in a small package.

The polymer body might save weight but it does cause the few metallic parts such as the bezel itself to build up heat rapidly when on, fortunately this is effectively diminished by the cutouts surrounding the head unit.

The WML is powered by a single CR123a cell, an Energiser lithium cell being included within the light from new. The life is given as 1.5 hours from a single cell, this might seem short but this is actual lit time. You’re probably going to struggle to use it for more than an hour each day even in a CQB environment, plus I’d suggest that if using this IR version you’re going to end up with a better lifespan on that mode anyway.

To replace the cell, simply unscrew the light bezel assembly from the body and place in a new cell. The bottom of the battery compartment is handily marked with a positive icon, indicating which end to place in first. 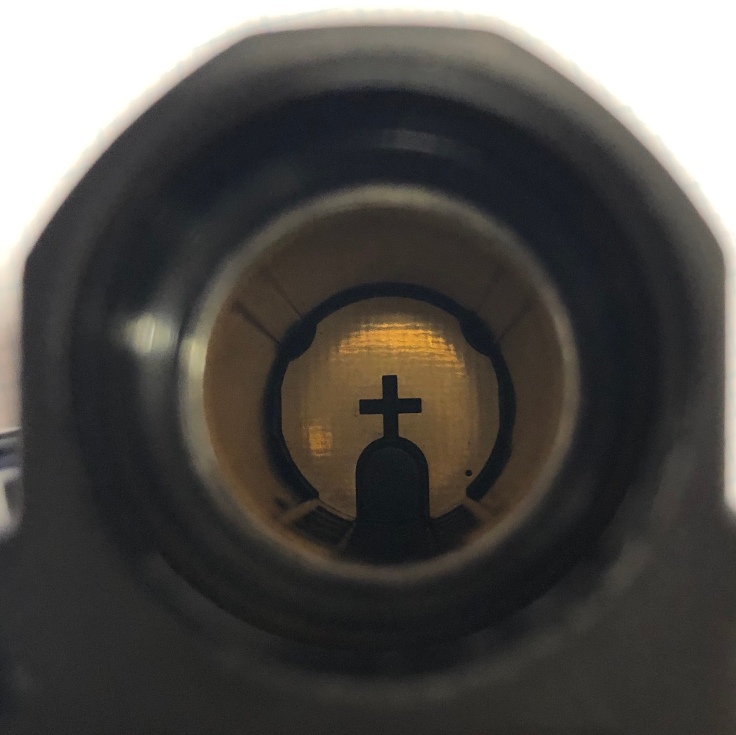 Not the scream inducing, ginger melting power of my Surefire X300 Ultra but certainly bright enough to use as an offensive light for CQB, there is a defined focussed beam which will certainly help with short to mid range shooting and enough spill to aid in peripheral and prevent tunnel vision. 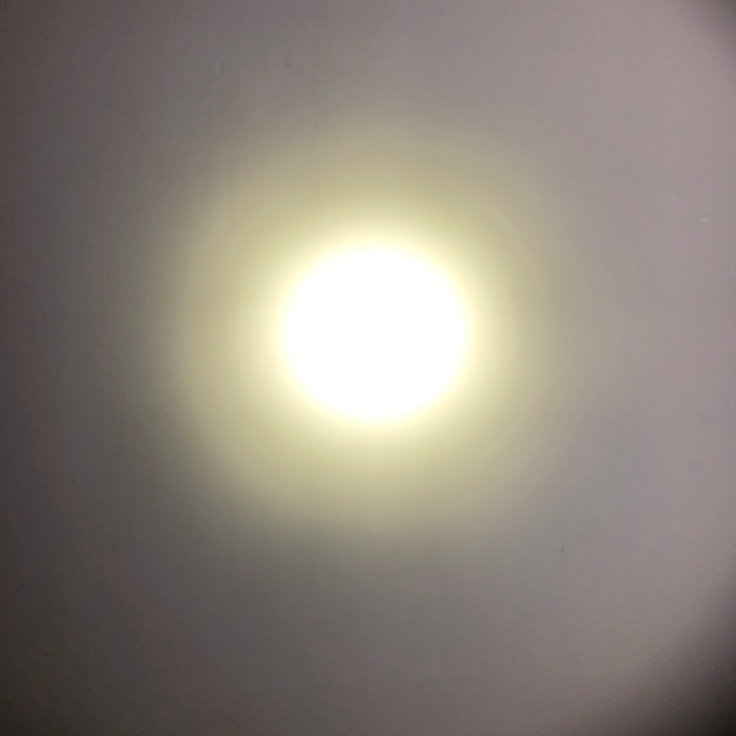 The IR output, much like the white light is alright for close up work, but does tend to lose its intensity over ranges of 30 metres or so.

Overall? A well balanced weapon light within a small and seemingly durable package.

I like it’s lack of weight and bulk, ease of use and the intuitive controls. For me it’s a winner and if you’re considering a light but don’t want the weight, bulk or hassle of a tactical light and tape switch on your rifle, this might be the light for you.

Is it a Surefire beater? I wouldn’t go that far despite its low cost and packed feature list. But is it a comfortable and user friendly light at a relatively low cost? Absolutely.