Magpul rifle stocks are everywhere, they’re one of those items that the majority of shooters either love or hate, but one things for sure… We’ve virtually all had one at some point in our lives.

Once they were considered the epitome of cool, but now they’re so common… Can they still be considered as Gucci, Ally, Essence (or whatever your adjective of choice is)?

Absolutely. You’ll see Magpul stocks in the wild more often than most of their competitors, from DEVGRU to the SAS, Magpul is still the king of cool. If further proof is needed, see the below pic of a MOE SL-K in the wild, courtesy of @btl_ltw.

I’ve had a brace of genuine and repro Magpul stocks over the years, from MOEs to CTRs and very briefly a UBR. The one thing I’d always liked was their apparent strength and lack of unnecessary gimmicks.

It was probably only a matter of time before I bought one of the SL range, but it wasn’t special forces or other airsofters that piqued my interest in the MOE SL-K, it was small-bore firearm shooting. 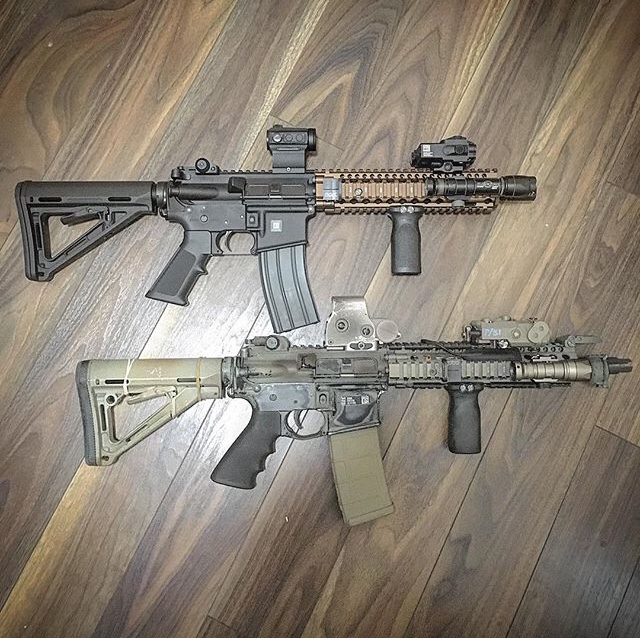 I’d already had a go with a friends Smith & Wesson M&P15/22 before looking at low profile stocks for the MWS, his .22lr rifle being furnished with a Magpul MOE SL stock and MOE SL grip, this hands on experience giving me a good indication of how it might work ergonomically on my own “weapon”.

Overall the Magpul furniture felt comfortable, solid and certainly helped make the shooting experience that much more enjoyable. With that in mind, the MOE SL range became swift contenders for the various bits I was looking to stick on my MWS URG-Ish (very “ish”) build.

I made this decision not just because of the MOE SL’s comfort but because of an interest in contemporary special forces carbines and their influences stemming from civilian competition rifles.

The theory being that I could create something unique, but not too far removed from what we’re beginning to see “in the wild”.

After a bit of research and a very short list of contenders, I decided upon the MOE SL-K. The primary reasons were due to its compactness, modularity and the simple fact that I liked the simplicity of it’s look and design over its competitors, such as the BCM Gunfighter and Mission First Tactical Battlelink stocks. 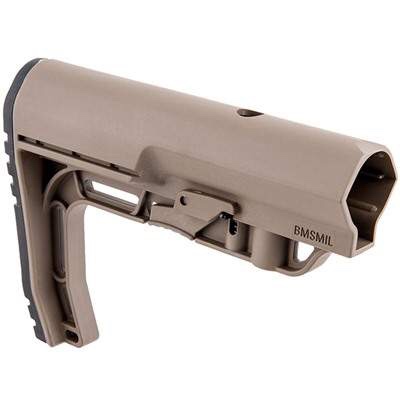 In a quirk of fate, Rich from The Reptile House Blog had unbeknownst to me also picked one up on practically the same day (His excellent review here) from our later discussions it appeared that we’d both independently arrived at the same product, with a similar view in mind about how its low form factor and functionality might be the best choice for our builds. 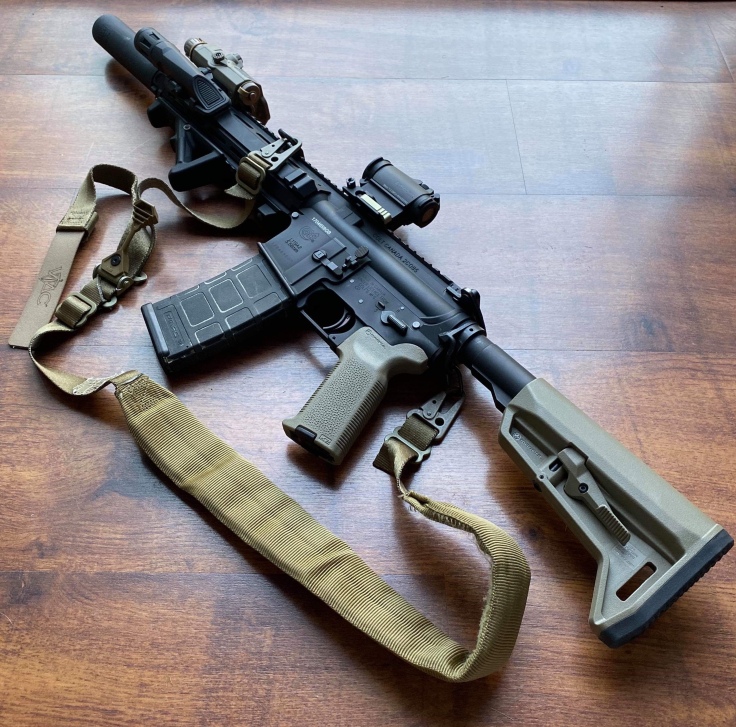 When it arrived (alongside several other goodies), I was struck by how small it was! Compared to other modern stocks that cater more for ergonomics than pure minimalism, it’s positively tiny. That being said, don’t let its size fool you… it still feels quite comfortable in the shoulder. 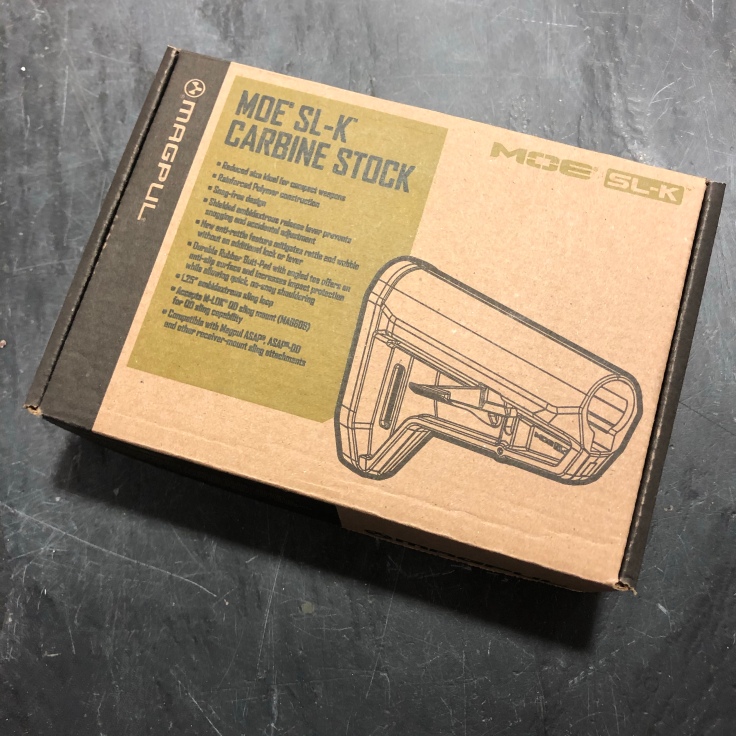 The second thing I noticed was Magpul’s lovely FDE colour, somehow they’ve managed to produce possibly the most uniform and well toned FDE on the market. You don’t realise how nice it is until you compare it to other high end brands like BCM and realise how washed out their colour looks in comparison (Sorry BCM). 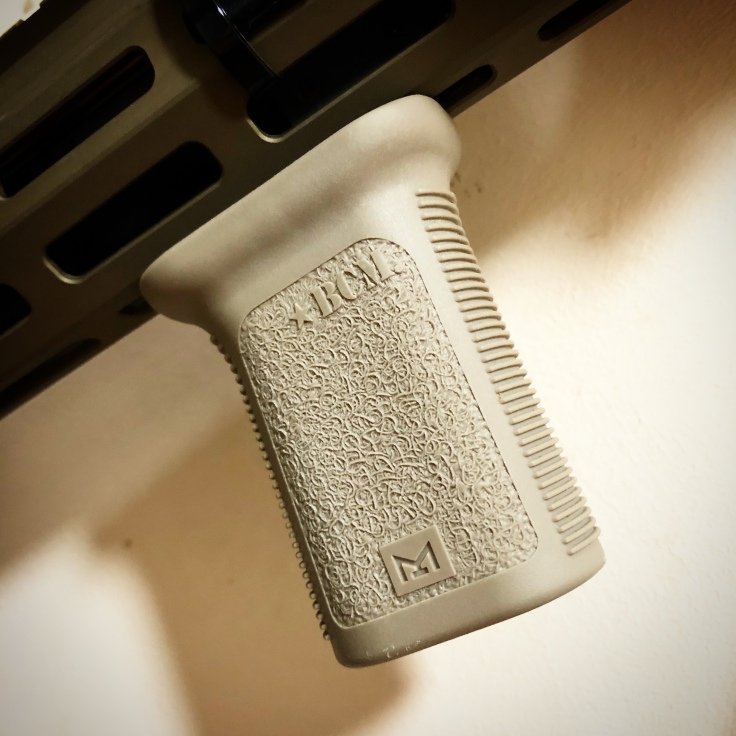 The MOE SL-K simply translates as; Magpul Original Equipment Slim Line – K, the “K” most likely being a reference to “Kurz” (German for short), this itself being a little nod to H&K’s MP5K “Kurz”, not the first time a weapon manufacturer has used this term, certainly not the last.

The MOE SL-K is designed as the company’s most compact and lowest form-factor design, suitable for use on small PDW type builds and specifically to not interfere with SAPI plates or other body armour.

The “slim line” aspect of the stock is referenced in its narrow overall design, a low profile sloping cheek piece which provides a little more “weld” than a V1 Magpul MOE or CTR (certainly more than the LE or CAR 15) but not as much as say a B5 Systems “Crane” or VLTOR stock, giving the user a reasonably good balance of ergonomics and compactness.

The lack of any cheek riser slots (as on the MOE and CTR) also speaks to this particular accessory’s minimalist design, if you need to bolt loads of stuff to your stock or require one with infinite amounts of adjustment, this is certainly not the stock for you.

The one beneficial thing you can supplement this stock with is an M-LOK QD Sling Mount, the Magpul one being a perfect fit (as you’d expect). The slightly larger MOE SL has this functionality built in if that’s important but you’ll be working with a slightly larger stock overall. The M-LOK compatible slot is fully ambidextrous and either the left or right side can be used to mount small M-LOK accessories.

The slot at the rear of the stock is also suitable for mounting your sling directly, being 1.25″ wide it’ll take practically any tactical sling on the market such as the Blue Force Gear “Vickers” VCAS (My review here) or the Ferro Concepts Slingster (also reviewed here). 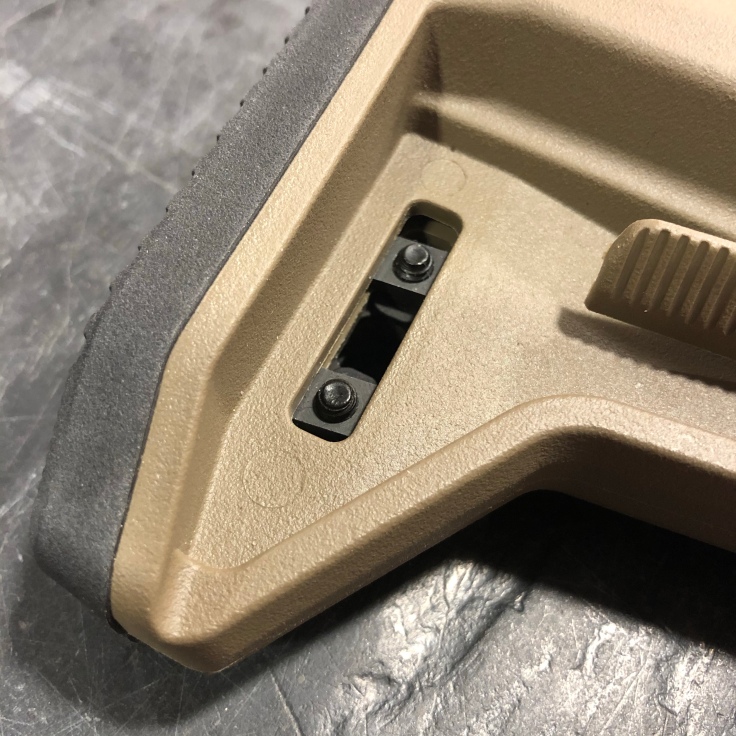 The actual body of the stock is made from Magpul’s signature “Reinforced Polymer”, which feels pretty similar to glass-filled nylon and has been rumoured to be the polyamide “Nylon 6”, but Magpul have stated repeatedly that it’s a proprietary material that they own the formula for.

Whatever it is, it’s well known in the industry as the gold standard of polymers for firearms furniture.

It allows a printed texture, able to be formed gloss or matt and in a wide variety of colours from FDE to Pink, has a small degree of flex to dampen shock and yet retains enough overall strength to not deform under load.

In short, exactly what you’d want a stock made out of. 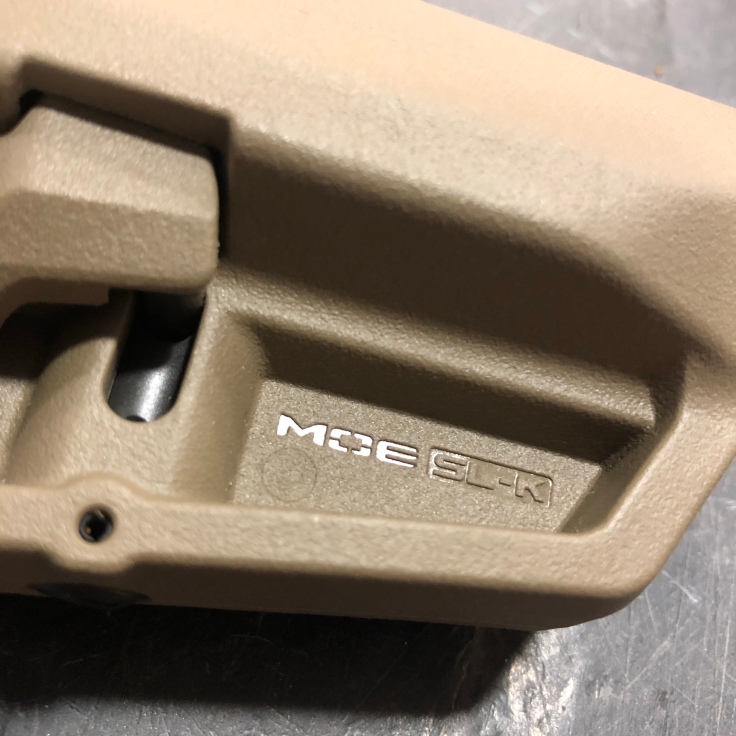 The only moving part of the stock is the fully ambidextrous buffer tube/receiver extension adjustment lever, this allows the stock to move along the buffer tube and snap into position, whilst not getting in the way or being at risk of accidental activation.

The stock is also a lot easier than its predecessors to install and remove, simply depress the lever fully and place a small item (Allan key or screwdriver etc) into the locking pin hole and then pull away from the stock… No special tools or hooks needed here!

Unlike most other Magpul stocks, this design incorporates the anti-rattle capabilities of the CTR, but on the SL series it is within the stock and formed as part of the control lever itself. This decreases bulk and also provides a consistently wobble-free fit onto your buffer tube, without having to engage a separate lock.

Two forks attached to the lever extend within the stock against the buffer tube, using friction to hold it firmly in place and the lever spring keeps tension in the whole mechanism, eliminating the majority of movement without the need for manual adjustment.

The rubber pad at the back is a different design to that of the other Magpul stocks, an extremely dense synthetic rubber providing a firm and comfortable cushion for your shoulder.

Primarily designed to work best with those wearing body armour, the MOE SL-K’s profile is decidedly shorter than most other stocks. It draws parallels with the original CAR 15 stock in its overall size (especially its height), but with the added features of a 21st century design such as the rolled toe and frictional anti-rattle lock. 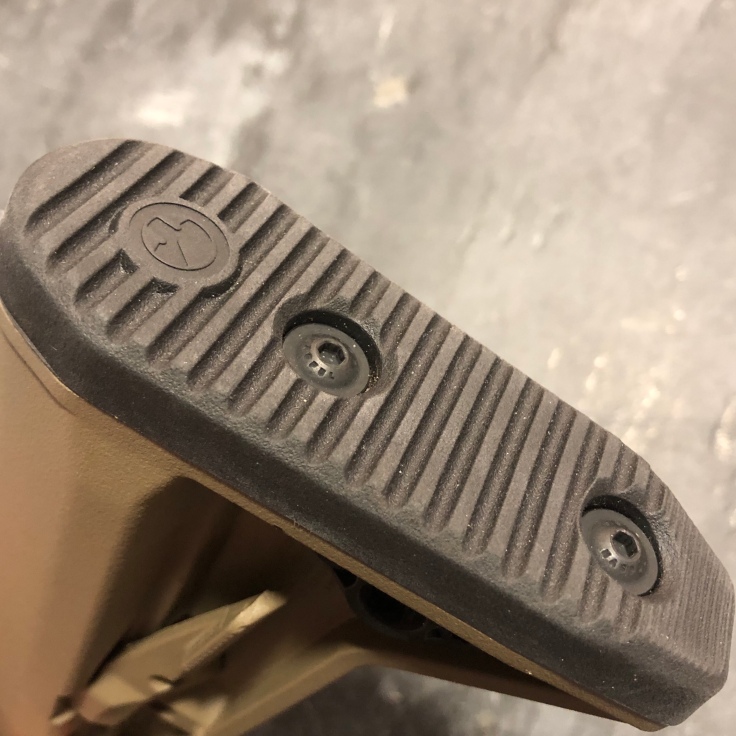 The rear plate has a slightly angled profile, not a massive amount but a couple of degrees to aid in keeping the stock comfortable when shouldered.

In addition to this, the bottom inch is rolled over on the toe to keep the stock manageable whilst wearing body armour and reduce any potential snags and aids in keeping it comfortable whilst transitioning the stock to and from your shoulder. 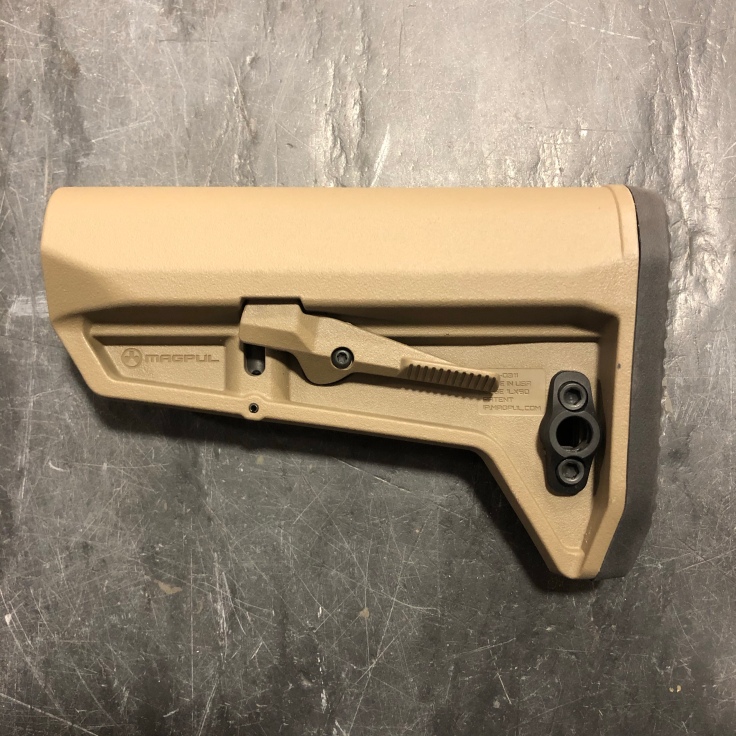 Overall I’ve found this stock very comfortable in use, I generally just wear a chest rig and it’s meant that I can move the rifle from shoulder to shoulder when moving around cover without the stock hitting me in the face.

Its real strength however, lies with its comfort whilst wearing armour, specifically SAPI type plates. As mentioned before, the short “rolled over” rear face makes it deceptively compact whilst providing enough space to fit well in your shoulder just on top of the SAPI plate.

Can I recommend this stock? For small builds where less is more? Sure, it lends itself well to compact builds where bulk is the enemy and a small form is your friend. As for longer rifle builds? There’s probably better alternatives but this compact little stock can still look absolutely fine on 14.5″ builds.

Things invariably change and I’m always looking to evolve, So I certainly can’t say I’ll keep it forever, but it’ll be a long time before I see this as something that needs replacing.

The Magpul MOE SL-K retails on the market at a modest price of $40, it’s hard to argue against this being a competitively priced stock, even compared directly against Airsoft clones of its bigger brothers.

I bought mine from Brownells UK, but it’s worth checking other businesses as you might find it in stock (no pun intended), closer to home and for less money.