Range Bag, Get Home Bag, Grab Bag… There are as many names as there are uses for the type of bag of which the 4-Banger loosely belongs to. The reason I say loosely is that I’ve not seen another bag that has the key functions that make this so unique, Sure… There are dozens of other bags on the market that on the surface might look to fulfil the same role, but let me show you some of the things that set this one apart from the others.

Firstly, The rough layout of the bag. The 4-Banger consists of a kangaroo pouch for storage of magazines or similar sized items, A main zip compartment just forward of this, Two smaller zip compartments on the very front, A mesh pocket on the rear of the kangaroo section, A main strap with removable pad and 2 x 6 section of laser cut molle with a Velcro surface on one end of the strap and finally there is also a smaller waist strap, Which can aid in keeping the bag in one place for a couple of uses I’ll go into later. 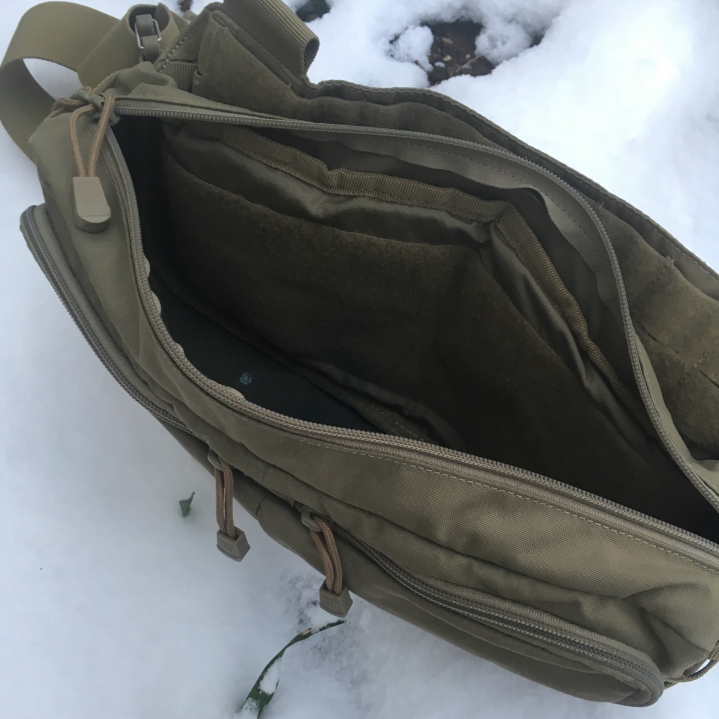 So, lets have a look at its core function and how it handles it. The bag is designed to hold 4 x 5.56 STANAG magazines, this is significantly less than other offerings, even 5.11 make a Bail Out Bag which holds 6 magazines! But the beauty in the smaller capacity is that its very low profile, the magazines are also stored behind the main compartment, not outside of it… This in itself is a massive advantage if using the bag as a direct source of magazines for your weapon. Having the magazines close in to your body keeps the weight from flapping around on the outside of the bag, and will also aid in a smooth draw (Especially if the user has decided to use the supplied waist strap.

Each Magazine is retained in a 2″ wide elastic strap which runs along the entire back of the magazine “kangaroo” pouch. there is also a built in flap for each individual magazine which can fold in on itself to be stowed away if needed.

Halfway along the back there is a slot which you can feed through a section of velcroed webbing to secure the kangaroo in the middle, or left out you could opt to fit a much larger single item at the expense of rigidity.

5.11 also provide shock-cord retainers and tabs for the magazines but I’ve left these off as the elastic alone is more than sufficient, In fact I rarely even use the flaps unless the bag is going to end up in the bag of a truck being thrown around.

The main compartment is deceptively big, with a 5 litre capacity its large enough to store everything you should need for a days Airsoft, And at a push you could use this as a team “bomb up bag”.  The compartment is fastened with 2 x YKK zippers with the option of either left or right hand opening. Along the front of the compartment is another 2″ elastic strap, again this has been split off into 4 x magazine sized sections (So your little low profile grab bag is now holding a full 8 mags!) with another pistol mag sized section at each end, Perfectly sized for TAG Rounds or speed-loaders.

On the inner edge, the entire back is loop Velcro… I used to use this for patch storage but I’d recommend one of BlueForceGear’s dapper pouches if you wish to use this section for smaller items. 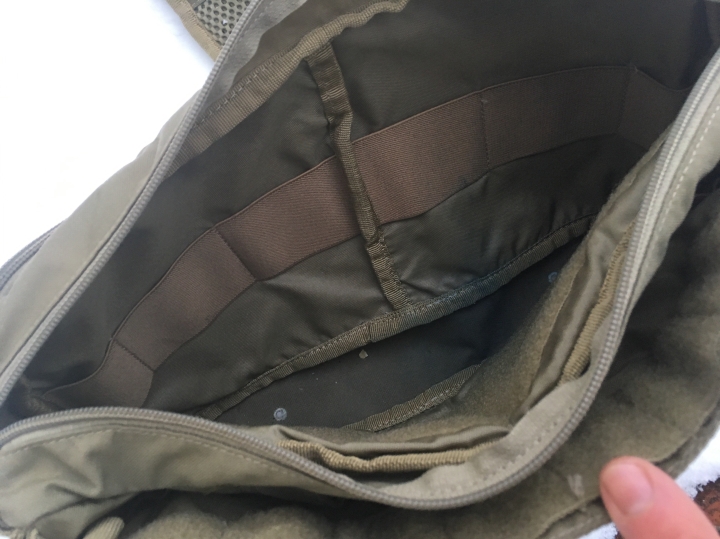 The Two front zip pockets are identical, Save for the inclusion of a “key keeper” in the right hand pocket and a square loop field on the outside of the left pocket.

Both have an elasticated mesh divider and are generous in their size, but when empty they take up no space at all.

The zippers all round are YKK’s  “Self  Healing” zippers with short cords attached to pull tabs sporting the 5.11 target logo. 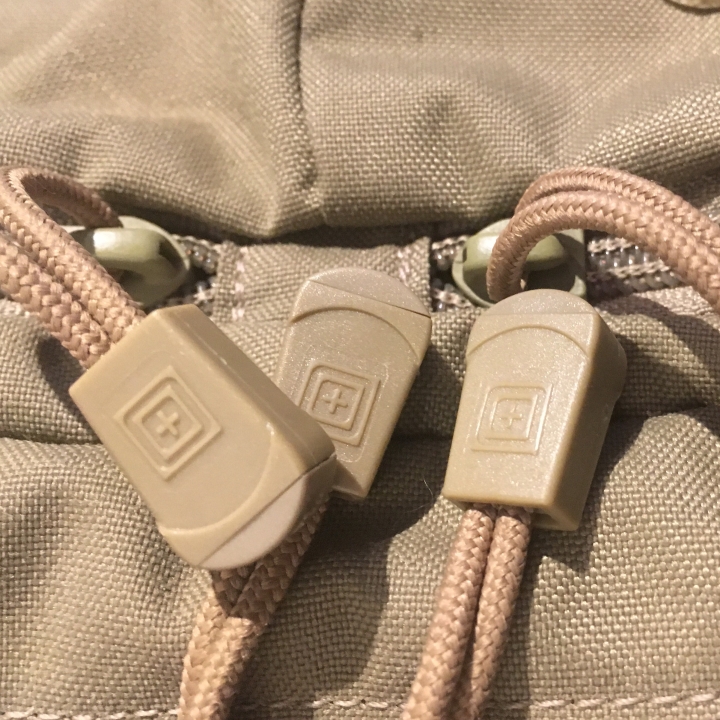 The mesh compartment to the rear of the bag  is advertised as a “concealed pistol compartment” but I wouldn’t want to put anything of value inside as its rather open and doesn’t have a great degree of security. I’m sure for carry of a firearm in the US its a worthy option but many 4-banger owners opt to carry a pistol inside the main compartment either using the elastic straps or a Velcro backed holster. Either way, its another area you can use for items you wish to have on hand such as gloves (No pun intended!) or snacks.

The body of the bag itself is made primarily from 500 denier nylon which has been treated to be weatherproof, although not strictly waterproof  I’ve yet to find any items suffering from the elements once inside either the main or smaller zipper pockets.

As for durability, I’ve owned this particular bag for 4 years! Don’t take my word for it, look at the photos… The only significant mark is on the interior where I somehow managed to set off a blue smoke grenade (Most of the blue washed off  straight away and I’ve never bothered to give it a proper clean)

Aside from the magazine pouch, one of the other unique features that this bag has, is the strap itself. One of the first things you’ll notice is that the bag has four attachment points (two on the top and one either side, this allows the bag to be used as an over the shoulder, Worn comfortably on the waist or one of the interesting things this bag is able to do is be able to be used as an “emergency” chest rig by simply connecting the main strap to both top loops and linking the waist strap around your mid section, this looks a little odd but it works surprisingly well.

Anyway, back to the strap… the strap is connected on both ends with a proprietary spring gate clip, I initially was a little concerned that these might fatigue under load but I’ve never had reason to worry and these have held up to whatever weight the bag has had inside over the last few years. To use, simply squeeze the clip and push the wire gate until it snaps open, then feed the clip through the loops on the bag and reset the clip… Job done.

One end of the strap has an interesting feature, the aforementioned molle panel. This is topped with Velcro loop and is a perfect place to either stick an identifier patch or a pouch for an IFAK or torch.

The strap also boasts a removable comfort pad, mesh lined and with a pair of non slip panels, this works great and keeps the strap from becoming uncomfortable under load.

When I picked this bag up from Pull The Trigger in Plymouth, I paid around £60. Nowadays you can expect to pay £60/£70 depending on the retailer, and it’s available in 4 colours. I chose Sandstone (Which is about half way between Ranger Green and Tan.

Overall I’d have to say it’s probably one of my most used bits of nylon. I’ve used it as a grab bag, lunch bag for work,camera bag and also as a carry on for holiday. The covert civilian look of the bag doesn’t scream military and it’s this that I feel is one of its biggest advantages. If you need a bag for carrying a few mags, bottle of gas and some ammo, I can’t think of anything else I’d recommend more.