Boring, Boring Glocks… Or are they?

I’m still undecided on if I actually like the Glock, Or whether I simply appreciate its utilitarian simplicity as a sidearm that is battle proven and used the world over.

Glocks are not the most aesthetic pistols to look at in my mind… They lack the flair and detail that most other European pistols will have and they certainly don’t have any additional time or money spent on making them look appealing. 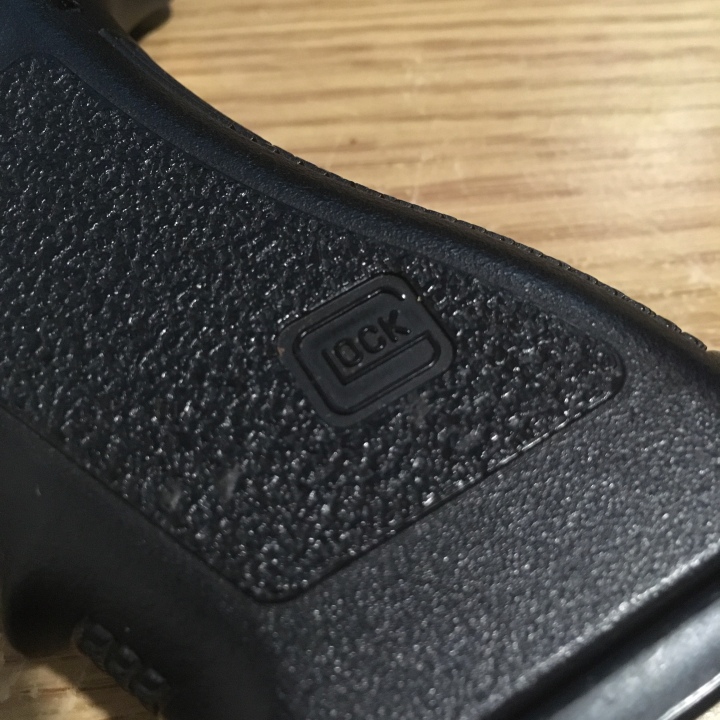 I shoot pretty well with a Glock, far more so than with a Beretta or Sig… and if I put in the same hours on a Glock that I did with a 1911 I’d probably shoot better with the Glock than anything else in the armoury. Its a bit of a shame as I’d happily trade mine in for a more unique pistol but its ability to go with any loadout and its ease of shooting makes it a veritable must have addition to my small armoury. 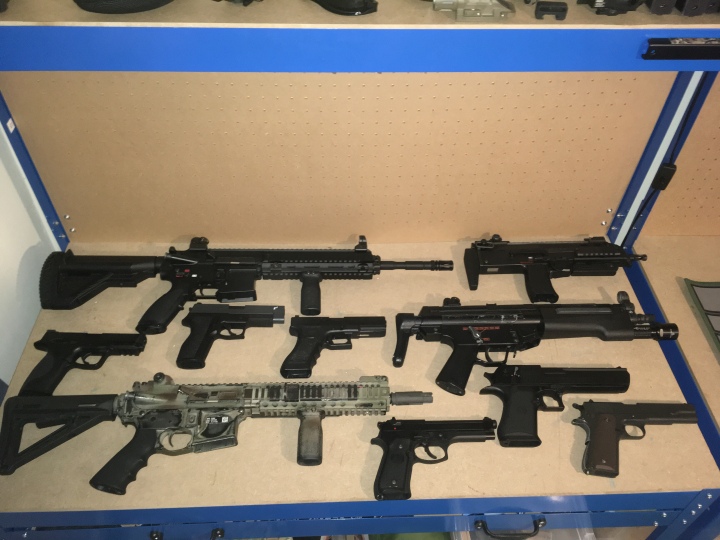 The Glock being such a staple of many military and police units, it is often seen being used by the Airsoft community… In the UK especially it’s by far the most common type of sidearm.

I’ve owned various Glocks from SOCOM Gear and WE, KWA and VFC… And I’ll be brutally honest when I say that my favourite one to shoot is probably still the WE Gen 4 with CO2 mags. I had this as my primary sidearm for a couple of years and although there’s mixed reviews on WE, The Glock I owned was a stellar performer out of a variable bunch.

Like with many things, I got bored of Glocks and reverted back to a 1911 and the Smith and Wesson M&P9 as my go-to sidearms… the WE was sold to a friend and I honestly don’t know where it ended up.

It was by pure chance that a friend was moving to Australia and I picked up a bundle of replicas from him, Including a TM Recoil AK102 and a Glock 17 in respectable condition. At the price it was offered to me I snapped his arm off and added it to the collection…

So, bear in mind this isn’t an out the box review… Rather it’s an overview of the TM Glock 17’s performance and also a brief look at the improvements TM have put into their more recent releases.

The TM Glock is based upon a Gen 3 frame, Superseded by both the Gen 4 and now 5 frames it does appear slightly dated, But the Tokyo Marui Glock has been available for over a decade and so it will feel a little older than most of their lineup.

The frame itself is a pretty good replica of the original Glock, the trades are not 100%  but they are more than passable, I’ve always been willing to sacrifice a little realism for performance but if your a sucker for accurately traded frames, Guarder make several frames for the TM lock with are about as close as your ever likely to get.

The slide itself is accurately traded, with the ability to swap out the sights for either the included “Night Sights” or aftermarket sights such as the excellent Nineball tritium sights or UAC’s Day/Night sights which I own for the M&P9.

Its worth noting that everything on the TM Glock 17 is replicating that of the real Glock 17… Good and bad its all there… However it’s not 100% correct in its dimensions, The slide is a little too big overall, prompting the need for either a Glock 21 sized holster or a little sanding or alteration of standard real spec 17 Holsters. The rail and frame is also slightly out, not enough to cause too many issues but it’s certainly not perfect.

The sights supplied as standard are plastic “Ball and Cup” type sights, Almost identical to the real sights… Even in the material used. In fact its one of the only things that is recommended by practically everyone who shoots Glocks to be replaced as soon as possible.

The trigger, Being “striker fired” the trigger pull is a little shorter than most double action pistols but is still a little longer than you’d expect, As is the trigger reset. However the pull is soft and easy to judge, rapid shots are pretty easy with the Glock 17, the recoil as well is exceptionally soft. This is mostly due to the lightweight slide but a high grip does help keep the barrel from lifting.

Accuracy and range are typical TM, Honestly… They’ve got the whole pistol building thing locked down. Simply buy the one in the shape you like and thats it… functional sidearm that’ll hold its own and with practice become something to be feared in close quarters. 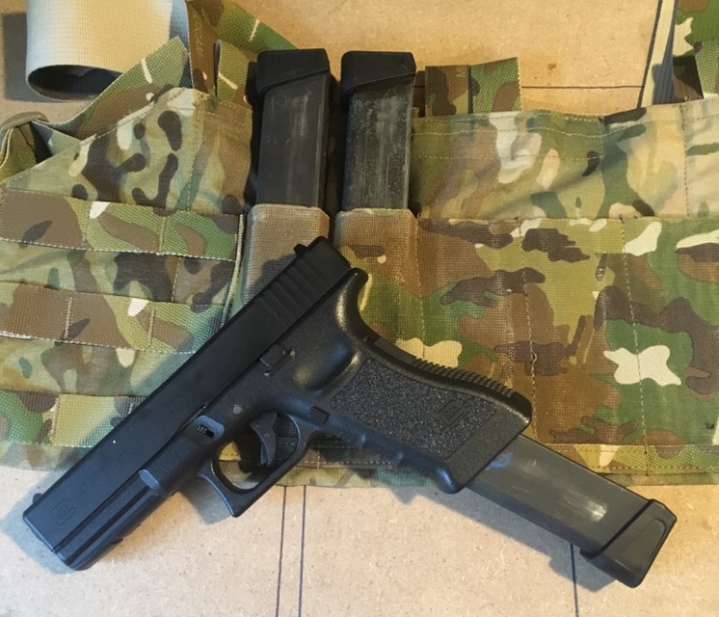 The standard magazines hold 25 shots as opposed to the real Glock magazines holding 17 rounds. There are longer 50 round magazines that replicate the 33 round “Joker” mags made by Tokyo Marui but I’ve personally found them a little bulky and prone to light striking issues in warm weather due to the internal pressure with Green Gas.

Hop adjustment is pretty simple, Adjusted via the underside of the breach on a wheel type adjustment. To access the adjustment you will have to remove the slide first.

Removing the slide is simple as peas… First, Cock the pistol and then pull down on the slide lock on either side, This allows the slide to travel forwards and be removed from the frame.

You can then further disassemble the pistol by removing the recoil rod and spring and then the barrel. Great for cleaning the barrel and generally inspecting for wear and tear. 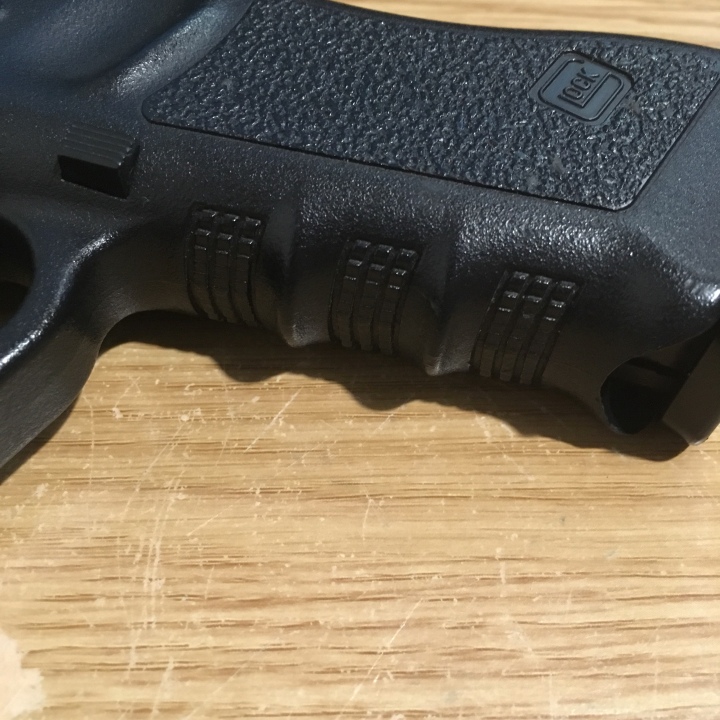 A common alteration is to “stipple” the grip, remove the finger grooves and create a small cut out for the support hand finger to rest against the trigger guard a touch higher than the factory standard. The below pics of Scarve88‘s (Ben from Cobalt) Six Second Glock 22 show some fine stippling work and a general smoothing down of the finger grooves to allow a more comfortable grip. 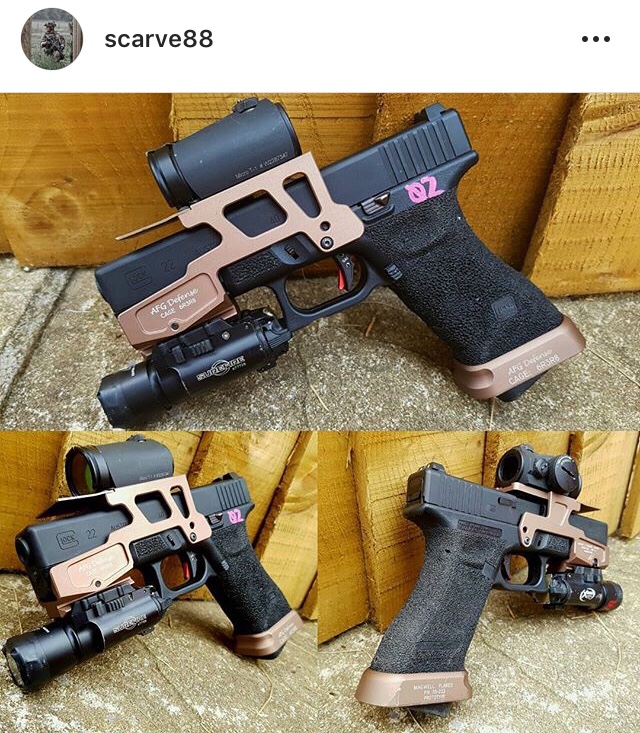 Another little tip, a cut out on the bottom of the Mag well/pistol grip can help with ripping out magazines that refuse to budge… See the below pic of Cheesy_C12‘s SAI Glock 17 build for reference of the mag well and support hand groove.

As you can see, the TM Glock series is highly versatile, easy to customise and a plethora of upgrade and replacement parts are available. The current series available are as follows:

With a Glock 19 hotly anticipated and with a potentially updated internal design it’ll be interesting to see how it stacks up against the older 17.

I’ll be buying a 19 as soon as possible, either for a UKSF build or more likely a “Roland Special” such as the below pistol used extensively by Garand Thumb and other well known shooters across the pond.

Time will tell on how the 17 fares once the 19 is released but with so many branches of the British armed forces and UK Police/CTSFO Units using the full sized 17 (Albeit the Gen 4 version) I can’t see the original becoming much less popular than before.