Nothing feels better than running around a building at night or low light with just a pistol, Being an absolute badass and taking players out the game who are equipped with far more firepower than you. There’s not much you need to add to a pistol to turn it into a competent weapon, a couple of spare mags, decent ammo, Gas and regular maintenance will usually provide you with a great sidearm, Adding a good holster is also a massive step forward… Only one other item is pretty much a “must have” when looking at a pistol for low light operations… A weapon light.

One of the leaders in the game, Actually… The Leader in the game is Surefire. Providing weapon lights for a number of years and expanding into Muzzle Devices, Suppressors, Magazines and various other accessories it’s fair to say they’re a market leader in the Firearms Industry. 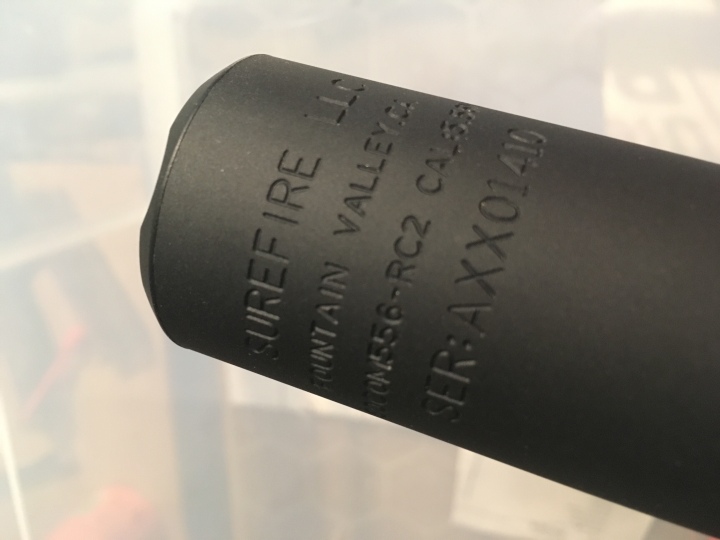 With customers spanning back several decades, From every major world power and all the abbreviations, SAS, FBI, GSG9, DEVGRU, Alfa Group… “The list is long and distinguished” 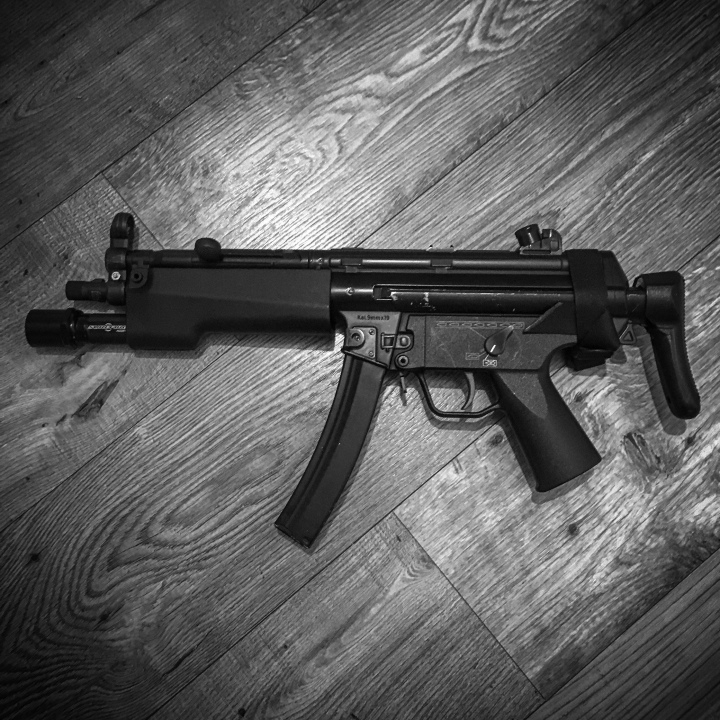 A couple of years ago I managed to be at the right place at the right time (As is often the case with buying good gear). A good friend was selling off a lot of gear to fund a set of dual tube NVGs… One of the few items I managed to snag from him was the aforementioned pistol light. I’d recently seen it’s incredibly bright performance at a night CQB game where it’s sheer brightness can cause the unexpecting target to flinch, Even before the inevitable shots hit their mark. 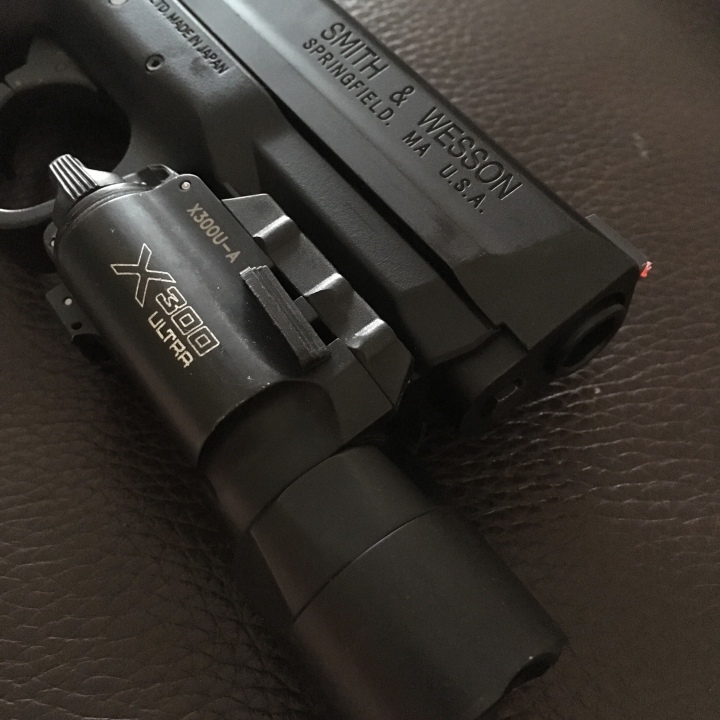 The light is supplied with several mounts, depending on the platform your attaching it to, Whether it’s a Glock, M4, Sig, M&P9 or anything else I can think of, there’s a mount to fit. At the moment it’s sat on my M45A1 which is a match made in heaven… The railed Colt has continually proven itself to be worthy of a light that’s more expensive than the pistol itself which isn’t an easy undertaking. 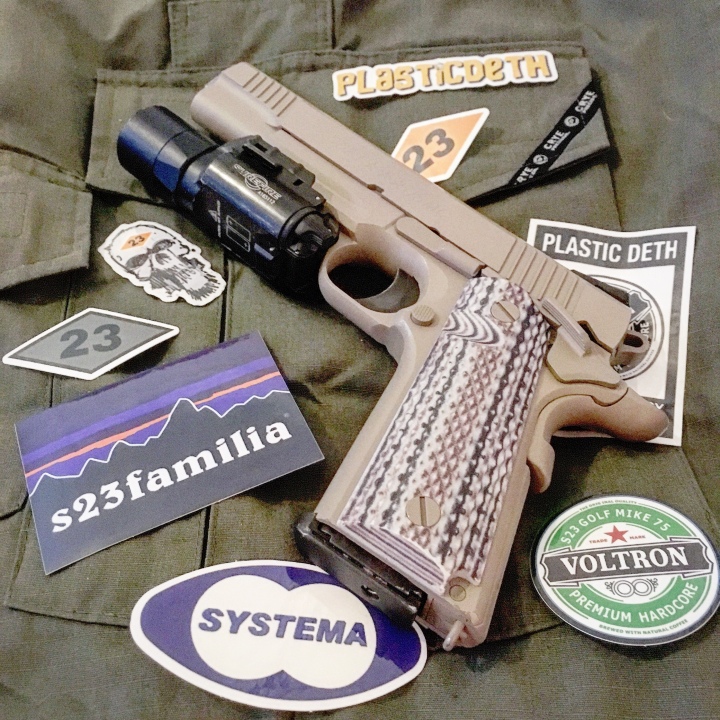 When directly comparing to the (If I’m honest) very good Element clone, The body is slightly less matt in appearance, the nylon wings and plate for the mount are a little more textured in appearance and I’d wager they’re glass filled nylon from the look and feel as opposed to the ABS that the clone is probably made from. 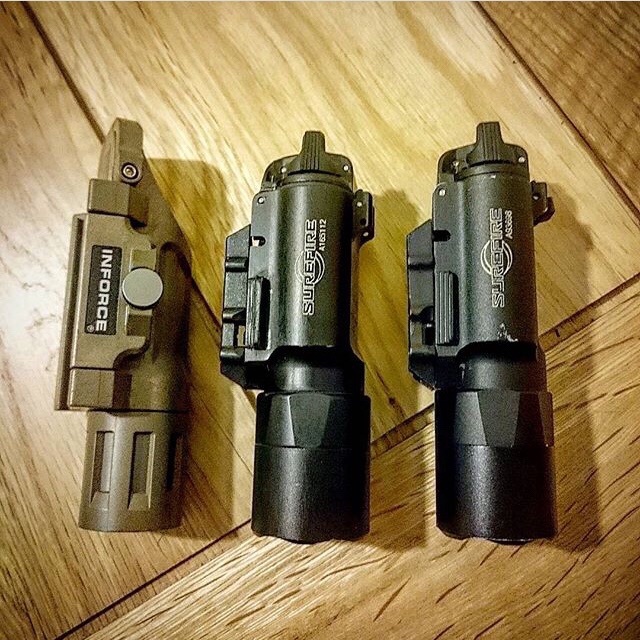 The bolts on this, As with virtually all US accessories are Imperial thread… Not the metric thread you’d find on an Element copy so be careful if you need a spare, you’ll cross threads if you just stick in a metric bolt. 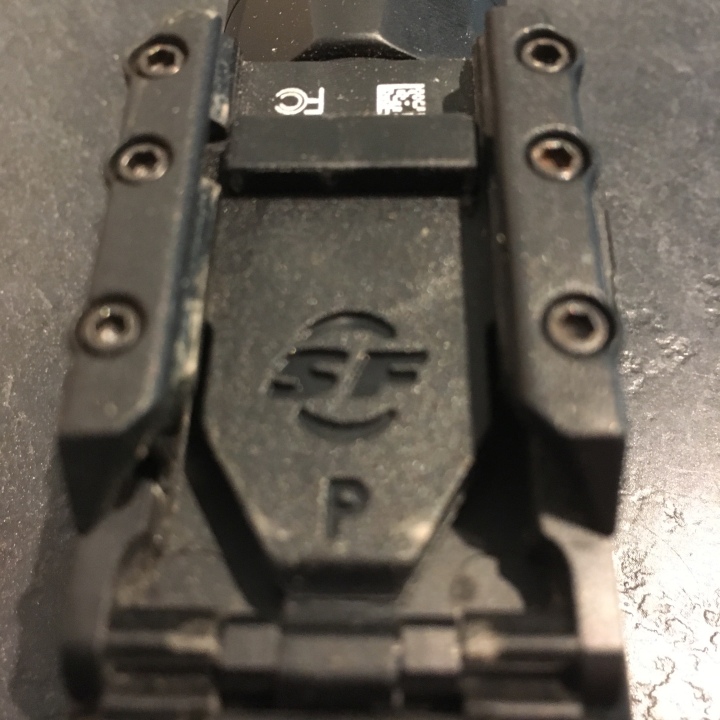 Moving onto the rear, gate type battery cover. It’s a little tougher to open than the clone, plus the water seal seems to be a degree thicker. 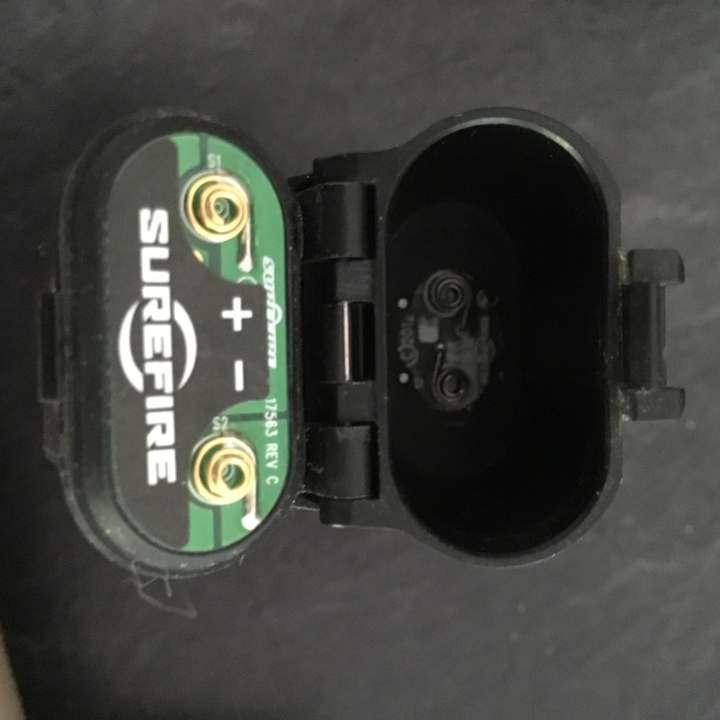 The controls are simple, A pivoting ambidextrous switch for constant on with a simple push forwards on the left or right of the lever for a momentary light. There are rat tail/ tape switches and DG switches available to suit most applications if required, The DG Switch offering a great option for one handed shooting and light operation. 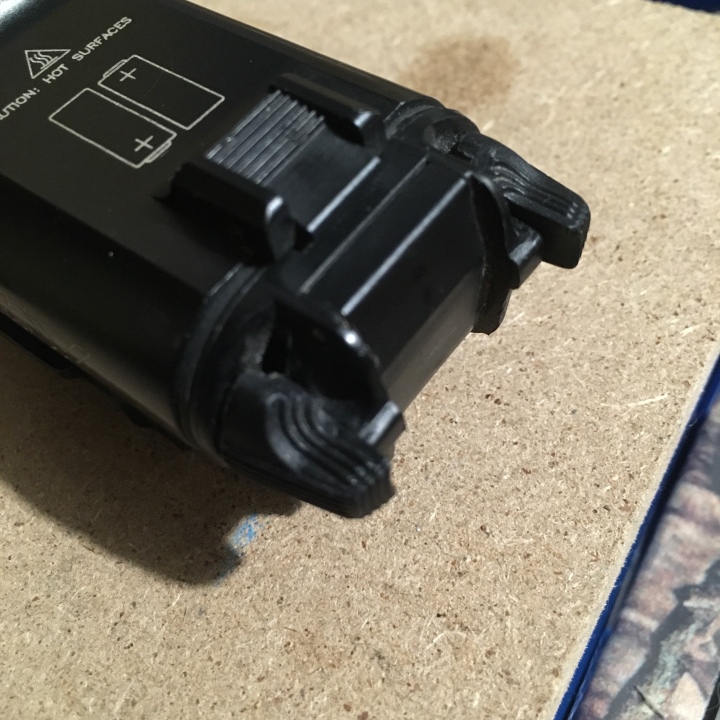 Markings are laser etched for the most part, an individual serial number opposed to an identical number throughout is what sets this apart from a clone, Basically if your serial number is A93898 then it’s a clone… Or the one Element used as a copy, And that’s extremely unlikely. 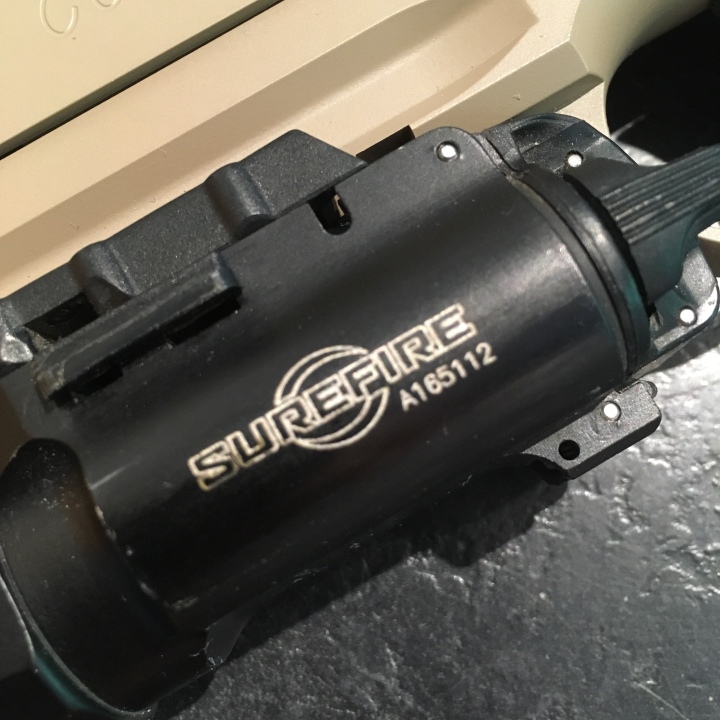 The Surefire logo sits to the left of the light with the serial number just below with the model number being displayed on the right side of the light. 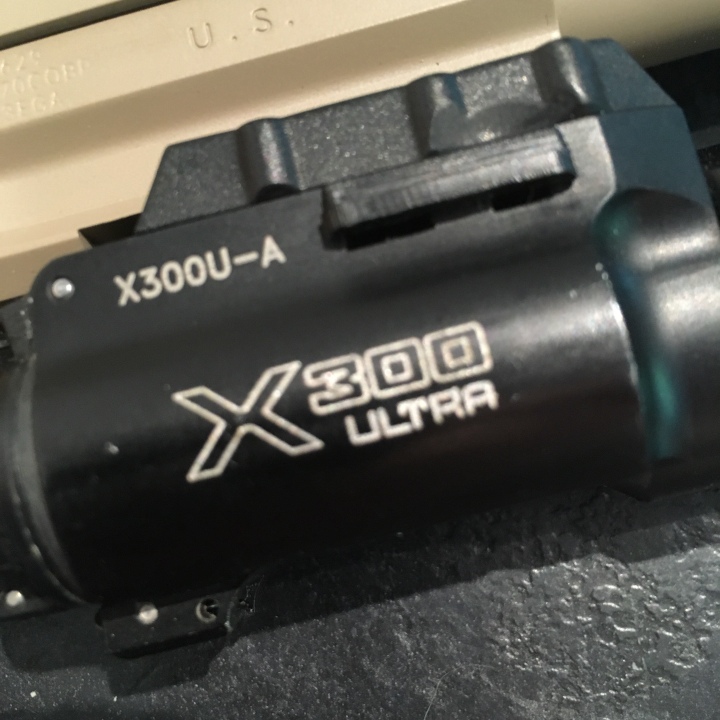 On the bottom is a handy cell orientation graphic which also warns you about the heat generated by the light, Which although quickly warms has never been on long enough to get hot for me. 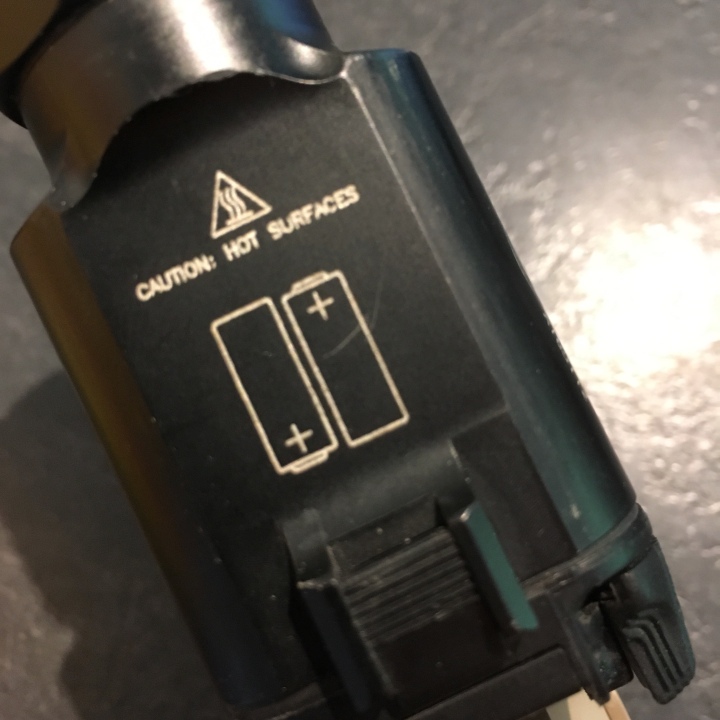 The key part of this light though is obviously the lens, reflector and LED… this model being powered by an LED will put out 600 lumens in a dual field beam… nice and blindingly bright in the centre with a less intense circle on the periphery, It may not be the brightest light in the world but it’s sure brighter and a nicer beam than that in the Element rip off. 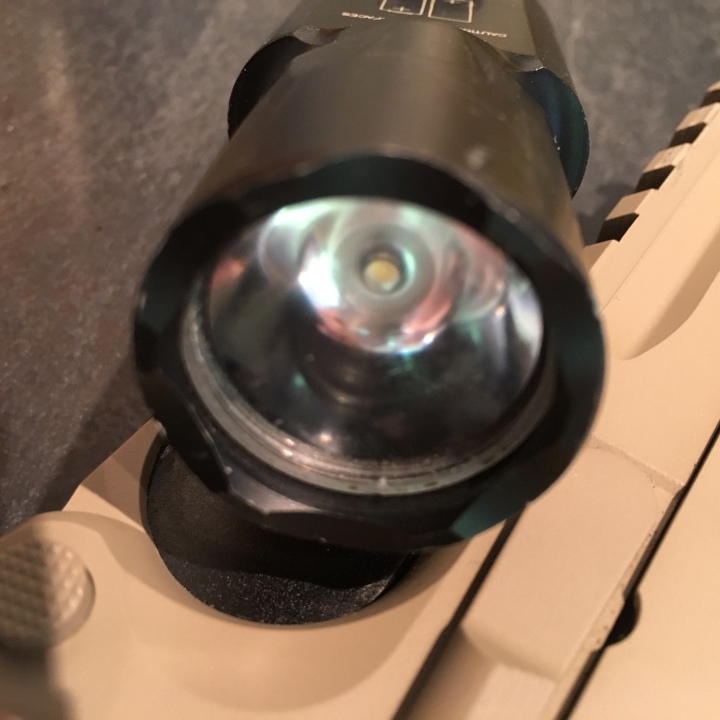 Powered by 2 x CR123a cells you get a solid 1 to 1.5 hours use, This doesn’t sound a lot but for a light that’s meant to be used momentarily it’s phenomenal.

I’m not going to lie, For the difference in cost and the limited application it’s probably going to have, The clone will suit most Airsofters, But if it’s within your budget to buy real, Why not?