Over a hundred years ago, The 1911 began its service life with the US Military… In all that time very little has been done to change the original pistol John Browning developed at the turn of the century. Minor ergonomic changes in the interwar years refined an already good design and so the M1911A1 served as the US military’s sidearm right up until the mid 1980s, with the introduction of the Beretta M9. Pretty much the next day, soldiers complained… stopping power became the hot topic for many  people and several units, particularly those within the special operations community retained their  1911s. The US Marines in particular liked their  1911s so much they decided to take the platform into the modern era with the MEUSOC and then later the very subject of this review, the M45A1 Close Quarters Battle Pistol. If your eager to learn more about the development of the 1911 into the M45A1 then there is a lot of other and far better informed places to do so, and with the 1911 having such a following from the likes of the often quoted Jeff Cooper to more modern advocates such as Larry Vickers and Garand Thumb, I’d  be foolish to think i could teach you anything about the real steel pistol you couldn’t learn on a 30 second search on Google.

And so, without further ado… The Tokyo Marui M45A1, hinted at just under a year ago alongside other new releases, Its a pistol that has been eagerly anticipated by quite a few people looking to use a  1911 style pistol with the capability of directly mounting a light, but don’t want the sluggish performance of a WE M45A1 or the lack of parts of a KWA PTP1911. For me, I’ve wanted one since the teaser was released for the 2017 Tokyo hobby show, and so I pre-ordered one with Wolf Armouries who at this moment in time, I’m pretty sure are the only UK retailer to have them in stock (not for long though!)

Packaging wise, The M45A1 comes in your typical Marui cardboard box with a polystyrene liner holding the pistol, magazine and cleaning rod nice and snug. the Manual is in the  lid and handily comes with a parts list, although unless your fluent in Japanese  you’ll have to rely on places like Eagle 6 to keep you informed of the official part names. Also inside are a red barrel plug, a small bag of ammunition and 2 small magazine follower inserts which allow the pistol to cycle on empty if desired. 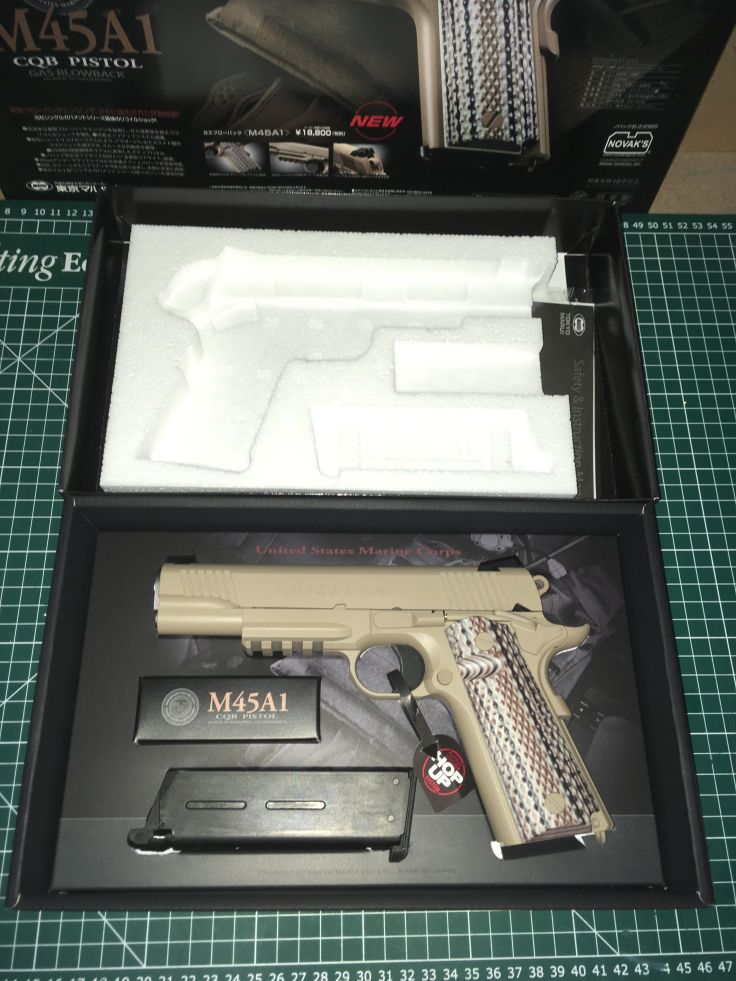 And the aforementioned breakdown…

The Pistol itself is replicated in Tan, as per the real one. I have no way of telling if this is close to the real pistol but its commonly said that the M45A1 is a rather light colour, which the  Marui pistol certainly is, and the reference photos online do seem to be a  close match to the Marui M45A1. Unfortunately, being a cold replica… it’ll never gain that burnt look so common with the marines sidearm, its funny how we Airsofters often wish to replicate the very things soldiers wish to remove.. Plate carrier weight, recoil, ammo capacity, the list goes on.

Here you can see the USMC markings on the slide, not as deep as they should be but crisp and in the correct size and font.

And below, the barrel “stamped” markings denoting the calibre of the real M45A1 and the N.M. (National Match) barrel. 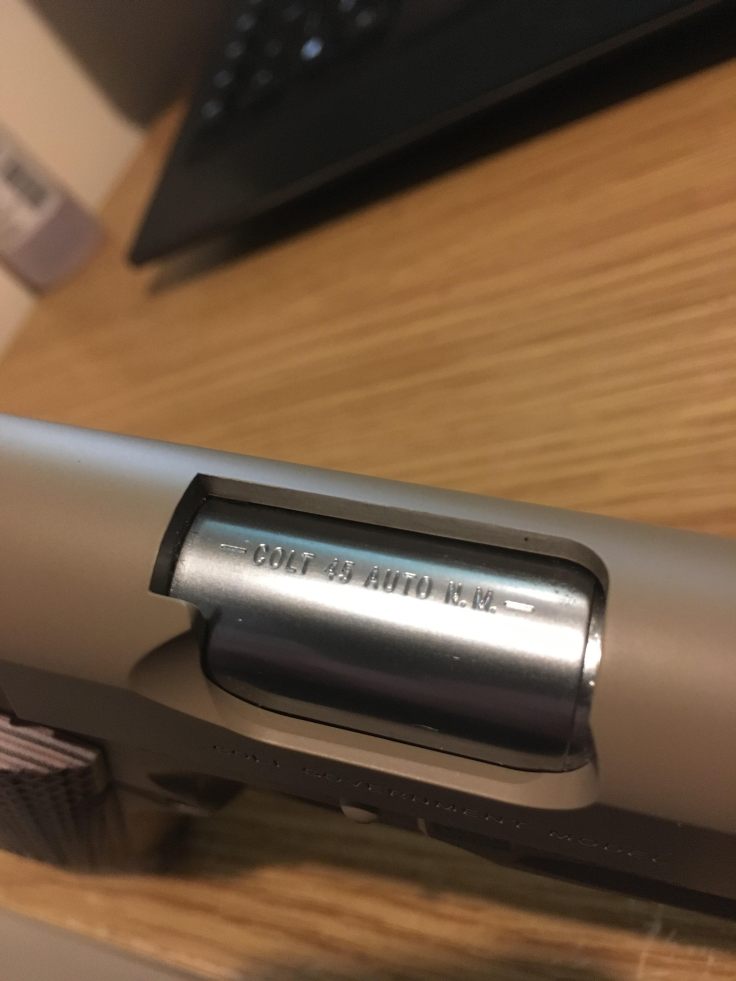 The VZ Diamondback G10 type grips are 80% there, not bad considering they’re 3D printed. I’d  swap these out for real ones but in true Marui form, they contain a fair amount of metal to weight the pistol a little more. 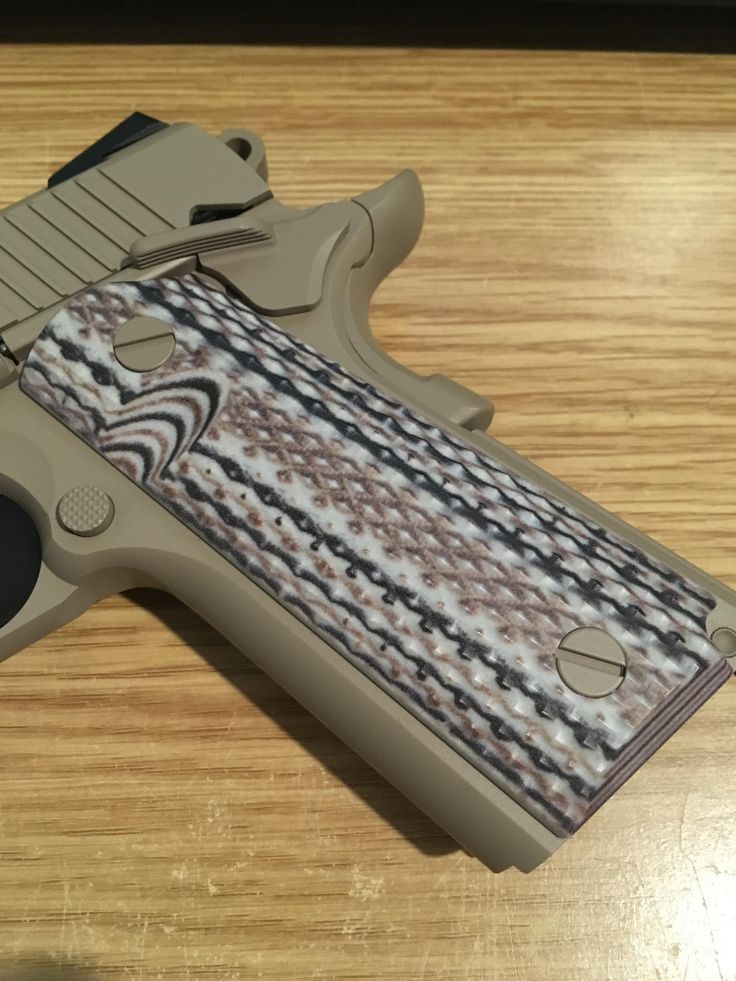 As you can see, Marui have replicated the Novak’s sights used on the M45A1, Although nicely rendered and appreciate that Marui have taken the unusual step of seeking a licence from the real manufacturer, i’ll be waiting for the inevitable aftermarket tritium sights.

On to the internals, its a familiar strip down to the other TM 1911s. I’ve swapped the slides and mags over and can confirm they will fit other TM 1911 models. Internal components on the lower seem identical, however the slide and blow-back unit assembly is reportedly  a new design with a higher volume cylinder so don’t assume its a compatible part, I’ll be waiting for braver people than me to fully strip  it down first… (Eagle 6, cough cough… ) The barrel bushing is very tight as well, should definitely keep that barrel from moving too much! There is a little movement on the front of the slide but no more so than any 1911 replica and it doesn’t warrant any concern.

And the cylinder, as you can see there is a fair amount of grease from the factory, those Japanese ladies know how to assemble their pistols! I generally apply the same  amount of abbey silicone grease as required when maintaining my collection.

As i mentioned, the magazine is back/forward compatible with other TM 1911s, and the top half as you’d expect is identical… feed lips, routers and valves all look like standard 1911 spec. The bottom however, that’s a new design. Again, I’ve not knocked out those pins because once they’re out you’ll risk losing that leak free performance. I’d have rather seen a hex  bolt at the bottom but I’m guessing the bolt and guide were taking up too much gas space… hence, these should apparently provide a better performance and/or higher gas efficiency for the 1911 series than the original 1911 and MEU  style mags. (Although it does mean those Dytac “Wilson Combat” base plates wont fit) 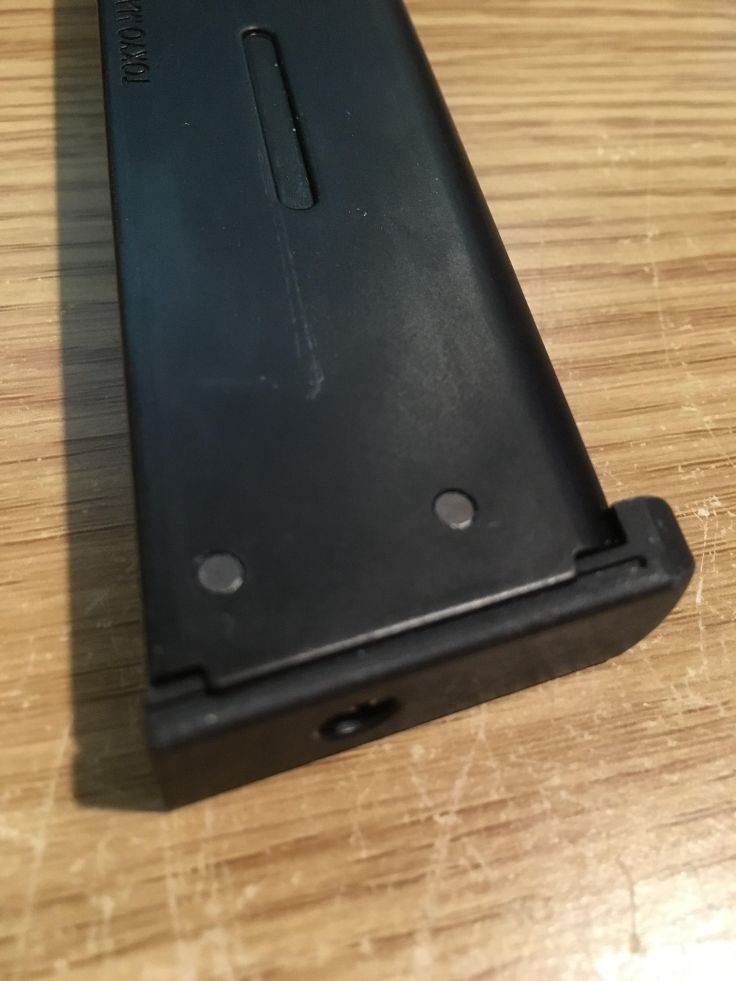 As for performance, Its a Marui… they shoot exceedingly well. Their recent releases have pushed the bar high, the USP being a beast of a pistol to shoot. This however doesn’t disappoint. The trigger reset is as good as any of their renowned hi-cappa series and the recoil is sharp but easy to predict. Range isn’t something I like to put a number on, but  using madbull .25 ammo and ASG Ultrair Green Gas I’m consistently hitting a 6 inch steel plate I’ve got set up 25m away in the garden, max range is approx double that… I don’t expect miracles, we shoot cheap plastic balls out smooth-bore barrels using a rapidly expanding gas to do so!

Overall, this will make a fine addition to my collection. I’m planning on having this as my main sidearm for my MARSOC themed load-out paired up with a genuine Surefire X300 Ultra, Holstering options are however going to be a challenge… I’ve been talking with the guys at HW Holsters and we (I mean they… All I’ve done is supply a few key measurements) are working on getting something usable within the next week or two.

Its a cracking pistol, with very few things I’d personally change.. The grips do grow on you, and for a guy who hates tan guns this is still a lovely looking replica.

I hope you’ve enjoyed this review, the first in many pieces to come from the blog and please feel free to leave questions, comments or suggestions…