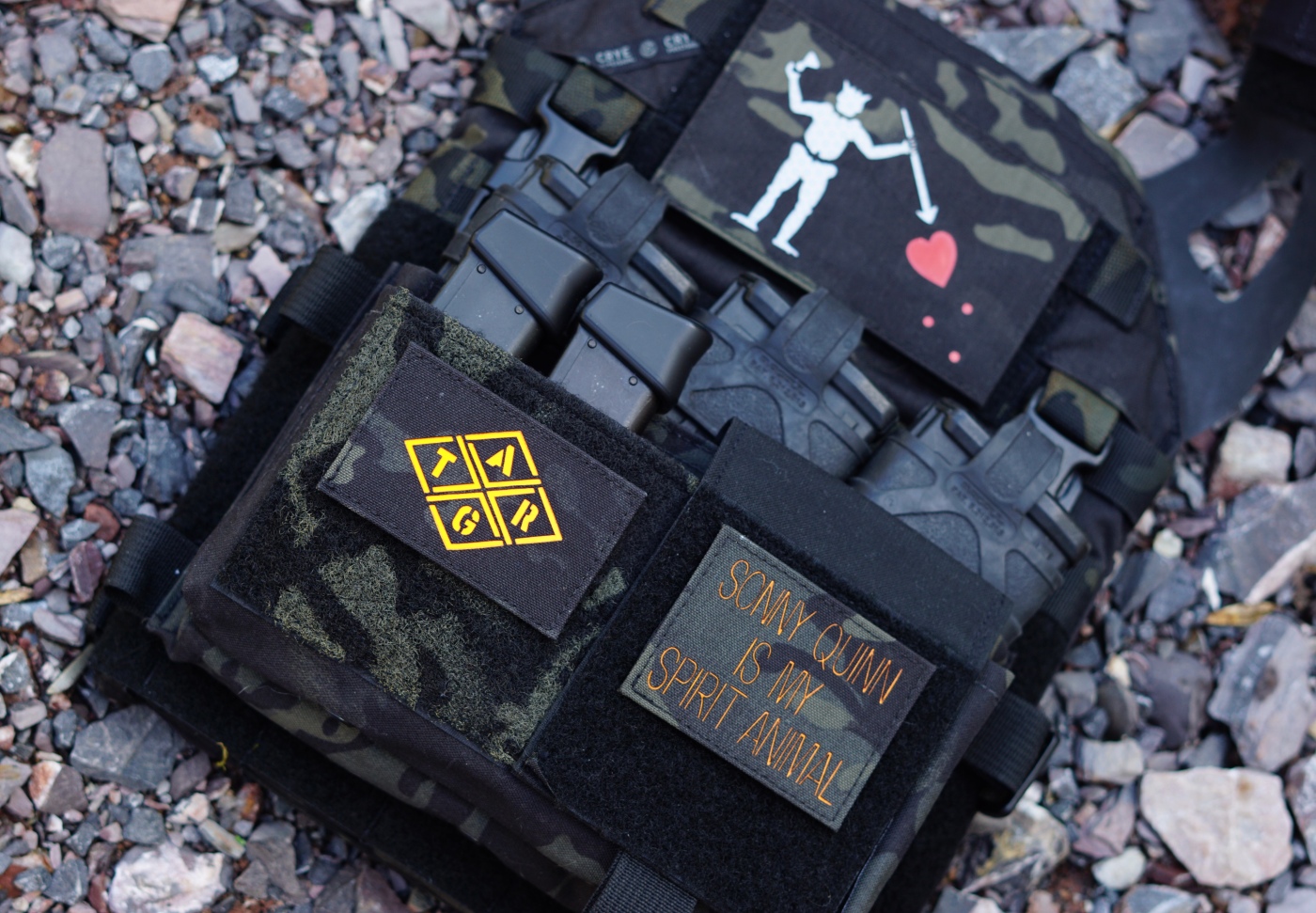 Crye’s JPC (Jumpable Plate Carrier) has for quite some time been used as the benchmark of how to make a lightweight and highly mobile plate carrier, whilst its not a one size fits all solution built for everyone’s needs, it has become a common sight on those who often have the pick of the litter when it comes to tactical gear.

But it is a universal truth that nothing lasts forever, not even with a carrier as good as the JPC. Improvise/Adapt/Overcome might be a great methodology for a quick fix, but in general it’s best to have the right gear for the job, not “stick that on with duct tape and zip ties, that’ll do pig, thank you very much”.

So why did Crye revisit their original design instead of creating a whole new carrier? Well, the answer is that I don’t know… But I’d hazard a guess that it’s due to the fact that the original JPC works very well, with the changes made to the new carrier can be considered tweaks as opposed to a full overhaul… More of a modernised option than successor.

There’s still a place for the original JPC, but over the years Crye have introduced new features to other, more recent lines. The unintended consequence being that these updates have made the original JPC somewhat of a black sheep in a catalogue of products that are designed to work together, hence the need for a revised version of this otherwise fantastic carrier.

Although the JPC 2.0 doesn’t change much from it’s predecessor in overall profile, and indeed looks superficially the same once loaded up, there are enough differences from the original JPC to make this worth paying the extra for.

Let’s start with the front plate bag, this being the prime real estate. The most noticeable change, is the absence of the integrated triple ammo “kangaroo” pouch featured on the original JPC. Instead, the JPC 2.0 uses a placard system borrowed from the AVS.

A loop Velcro field on the bottom of the front face gives your placard of choice a large area to attach to the carrier. At the top and bottom of this loop field sits a covertly designed loop covered strip of webbing, the lower strip being used to help secure one of Crye’s optional abdominal drop down panels.

The upper row is used as part of the AVS style placard attachment system, the main section of loop field having a hidden kangaroo pouch to tidy up any fixing straps you want to keep out of the way. Just above this, sits a strip of more traditional MOLLE type webbing, six columns wide. Useful for comms cable routing, but also remaining subtle enough to not interfere with use if not required.

A 150mm x 80mm Velcro loop field on the chest incorporates two discrete rows of MOLLE, four columns wide with a small excess loop each side. This loop field (as with all Velcro on the carrier) is not colour matched to the Multicam Black of the webbing and cordura, but plain black all over.

Another addition to this plate carrier is the covertly placed vertical webbing loops, enabling attachment of many popular aftermarket chest rigs/placards. These are tucked behind horizontal webbing and only need to be pulled out if required.

Although the webbing and cordura used throughout this carrier is colour matched in Multicam Black, many other materials are not. To put this within context, it’s important to note that the ability to colour match materials is always dependant on availability, some materials such as 2/4 Way Stretch Tweave, Hypalon and Velcro are often not available in certain colours or patterns, when this happens, Crye often opt to use the most appropriate block colour, in this case… Black.

On the sides of the front plate bag sits a pair of flat nylon loops, these are designed to aid in fitting side armour plates if required. Moving to the rear of the front plate bag, a central section of 330d cordura is complemented by a padded mesh ventilation panel. The outer edge of the plate bag is also made from 4 way stretch “tweave” that allows for plates of varying thicknesses to be installed, similar to that used on the AVS.

The rear plate bag is a more conventional set up, the body is comprised of the same 330d cordura with mesh and tweave sections in the same places. Three rows of MOLLE webbing run along the lower half of the carrier, their primary use being the attachment of the skeletal cummerbund.

Above this, sits three rows of loop covered MOLLE with an additional row of webbing to aid in cable management. Installation of armour plates is accomplished via the Velcro flap on the bottom of the carrier. A drag handle capable of holding 400lbs is located on the top, low in profile and not presenting much of a snag risk..

The biggest departure from the original JPC is the addition of Crye’s zip on panel system. A pair of zippers, one each side of the rear plate bag, provides a secure and rapid method of fitment for your panel of choice.

The hypalon material that holds the zipper in place is laser cut to allow the three webbing rows of the cummerbund to seamlessly pass through to the rear. An additional vertical strip of webbing gives that little bit of additional protection and support.

One distinctive JPC feature has returned on the 2.0, the Hypalon connection at each end features that bridge-like support that offers considerable strength whilst being incredibly low profile. There is an additional double stitch where it joins the front plate bag to help prevent any damage, but only on the front plate bags.

The shoulder straps are adjustable for height and join the front and back plate bags via a Velcro attachment. Incorporated within the shoulder straps is an emergency doffing (releasing) mechanism, this simply allows the straps to come apart by pulling on the two toggles that fit snug underneath the Hypalon at the front.

Both straps are encapsulated within a simple tweave cover, joined down it’s length via a sewn in Velcro strip. This has the added benefit of holding the cover firmly in place along it’s length, without it suffering from the riding up that often accompanies sleeve covers.

A choice of two cummerbunds are provided, a modest single strap or the more commonly used, skeletal triple row type. The single row has only limited use for most people, I’d struggle to find a reason to use it above the triple row cummerbund. Each section of the two part triple row cummerbund is attached to the rear plate bag via a short length of elastic shock cord, this not only provides a good amount of adjustment range, but also allows for a little breathing space for the person wearing it.

The cummerbund itself comprises of webbing and a microweave nylon backer, this provides a degree of rigidity but doesn’t compromise on modularity due to it’s MOLLE compatible construction. Pouches can be mounted inside or outside the cummerbund, meaning that users can customise their set up in a myriad of ways, even mounting multiple pouches to the same section in some cases.

Another component of the cummerbund is the emergency doff system, this simple webbing grab handle folds back on itself to provide a rapid means of removing the carrier. Simply pull both handles out to the side and then pull down on both of the aforementioned shoulder toggles. This should result in the front plate separating completely from the rear and falling away, as shown in Crye’s own demonstration.

The quality overall is good, there’s reinforcement where you’d expect it, bar tacks are found on virtually every webbing component and the materials are par for the course with high end tactical gear.

It’s not perfect though, the mesh panels are prone to wear and any contact between these sections and rough material such as hook Velcro could cause a rapid degredation of the mesh. I’d probably forego the breathability of this component and substitute it for something a little more durable.

Overall though, it’s a novel carrier… Far more interesting than I’d originally given it credit for. There’s a number of design features that make this one of the carriers that I’d suggest to anyone looking for something more versatile than the Ferro Slickster but not as comprehensive as the AVS.

Will I be adding one to my collection? I’m tempted… Really tempted. I’ve looked at both reproduction and genuine JPC 2.0s, but given that there’s usually a few corners cut on the repro carriers, I’d probably steer towards the real deal. It’s not a definite though… I’m not a hardcore plate carrier guy.

Thanks to Alex from GWOPGoons for supplying the carrier on loan for review (alongside the Spiritus Systems Chest Rig and other goodies), be sure to check out his content for upcoming merch/swag drops.