For a long long time I was a massive fan of running a “Battle Belt” loadout, but as time has passed my tastes have become much more minimal in nature when it comes to carrying weight on my waist. With the steady improvements in tactical gear over the last decade, its important to reassess what works well and what new gear is available that suits your needs. 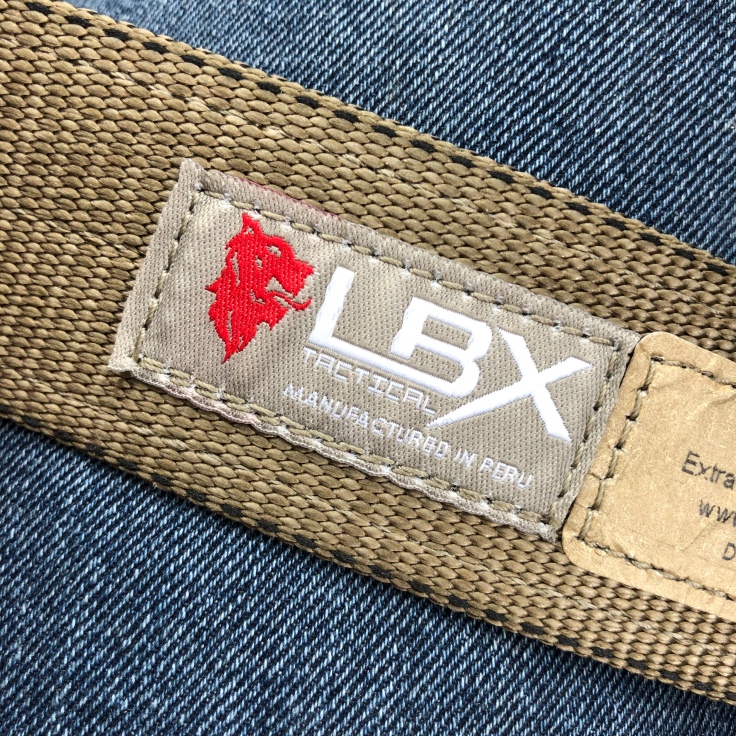 Footwear, weapons and clothing… My own personal loadout has undergone a drastic evolution since I first set foot on an airsoft field in the early 2000’s, the height of fashion at that stage was all black CRW SAS loadouts and Arktis Rigs with boonie hats… Somewhat dated by today’s gear standards but still very cool in my opinion.

So when Tactical Kit asked if I’d like to try out an LBX Assaulters Belt, I was slightly hesitant to do so… I’d previously owned and reviewed the LBX Blowout Pouch which I found to be a great bit of kit, well made and useful for its intended application. But on the other hand, it’s larger nature to my usual FRV Tailoring Shooters Belt made it seem a little bit bulky for my “Kaizen” philosophy.

So who are LBX and why is their relationship with London Bridge Trading (LBT)? Whilst many of you will know LBT from their years supplying SEAL Teams their tactical gear and also their oft replicated 6094 plate carrier, LBX is relatively unknown… Is it a cheaper outsourced line like Crye have with ZShot? Is it simply another trading name to appeal to airsofters? Well the truth is a bit of both.

In the US, A specific piece of legislation came into force called the Berry Amendment. This effectively forced any Tactical Gear businesses that sold to the DoD from importing their gear from overseas manufacturing, Its also why a fair amount of real steel gear comes in at such a high price point.

Some businesses (who I won’t mention) do produce their gear abroad but the final finishing touches are completed in the US. Now I’m not fully aware of the restrictions of this law as I’m certain that some gear that’s widely used is made abroad, but it could be that those are private purchases and therefore exempt.

LBX allows LBT to manufacture tactical gear (often with identical materials and designs) but at a lower manufacturing cost by having it made in countries such as Mexico and Peru, this has drawn both good and bad remarks from the tactical gear consumer base.

The LBX Assaulters Belt is an almost direct copy of that offered by LBT, however it’s a lot more available due to LBT only seemingly offering it on a contract by contract basis. The Belt follows very much in the same design as many other MOLLE Belt systems, The Crye MRB being a relatively close competitor. I’ll forgive the Crye fanboys from rolling their eyes when I make that comparison but it’s difficult to not look at both and see the similarities in their design.

The basis of the Belt is an inner belt which secures to itself itself via a loop field along its length and a small section of hook on one inner end, the outer belt has a corresponding hook field along its inside which allows the entire MOLLE belt to be attached over your belt loops and pouches to remain in place when the belt is removed from your trousers (Pants for you yanks out there)

I’m used to this type of set up, my current belt is the FRV Tailoring Shooters belt which also uses this inner/outer feature. The benefits of this are that unlike a traditional Rigger or MOLLE belt, the inner/outer design allows for a semi-permanent set up whilst the belt provides an often essential job of holding up your pants.

The inner belt is made from a “ballistic” nylon, semi rigid in its design and coated in its outer surface in a loop field which covers its entire surface (bar the last inch). There is a 6″ length of hook field on one inner end which allows it to be attached to itself, this end also has a short webbing loop sewn in to aid in doffing the belt with gloves on. 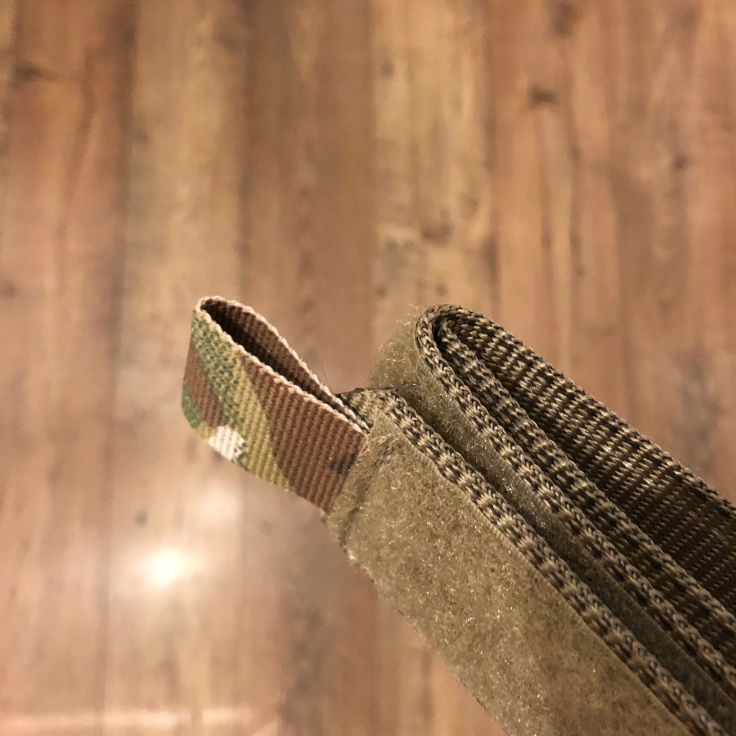 The outer belt is made from predominantly a high denier cordura, I’d hazard a guess that it’s 1000d but I’m pretty shit at IDing material, especially for someone who has been in the upholstery trade. The rest of the Belt is made from a 40mm hook field on the rear face of the belt and along the front there is 25mm webbing (colour matched to Multicam but missing the Multicam trades you’d usually see). 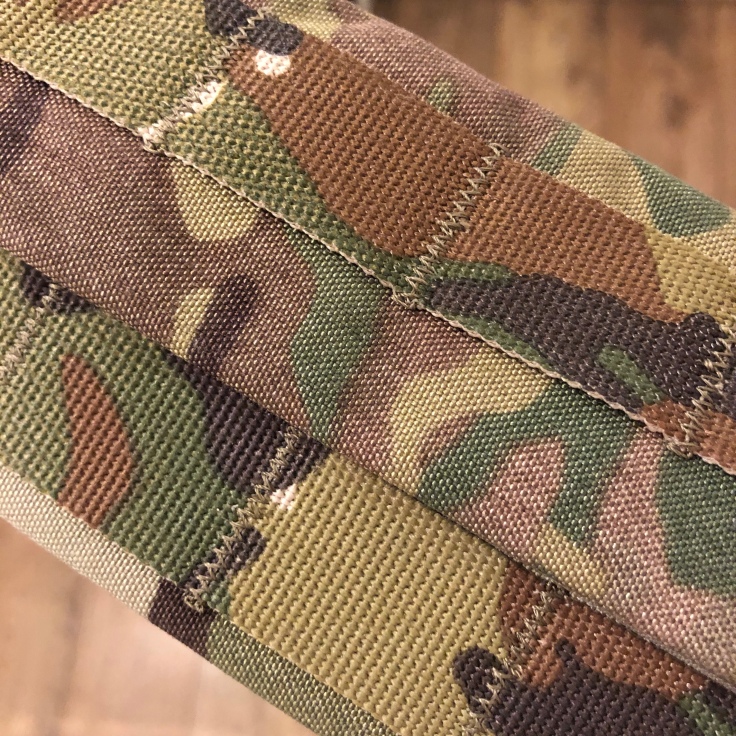 The belt is noticeably divided into three main sections, each of these with 7 MOLLE columns stacked 2 rows high. Each of these three sections is angled in such a way that when the belt is worn you have a nice, ergonomic fit on your hips. 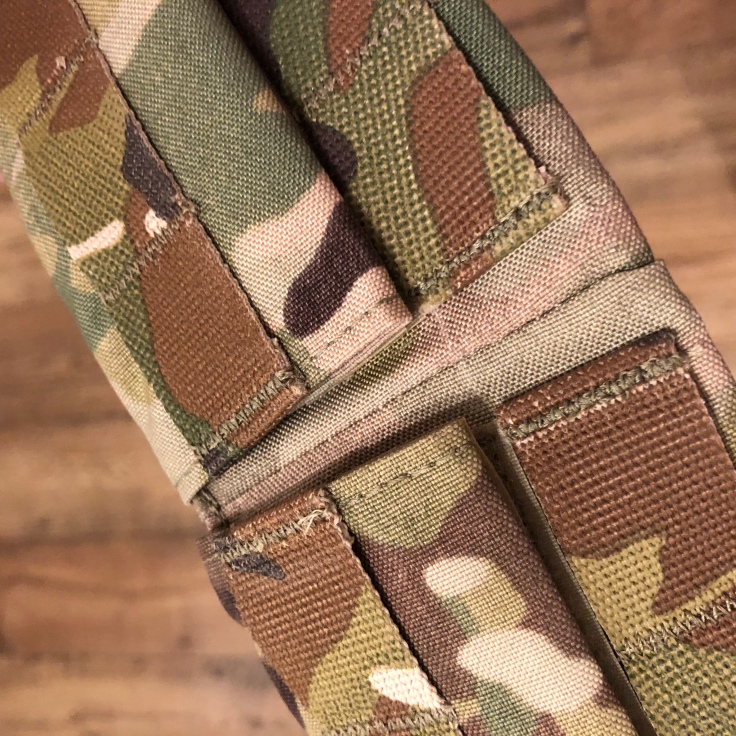 Also divided into three sections is the Velcro flap that covers the top row of MOLLE, this allows for a Riggers type or uniform belt to be worn as part of the belt set up. I’d seriously recommend that any potential user looks into doing this. The inner belt will offer a lot of stability but for a secure fit (especially under load) it would benefit from a buckled belt in this outer channel.

Attaching pouches to the belt is as simple as peas, it works exactly the same as any other MOLLE panel belt out there. Simply thread your MOLLE attachement through the loops and away you go, ensuring that you’ve rethreaded the strap back in n itself is a painstaking but vital step for a secure and wobble free fit.

The overall build quality is amount what you’d expect for a mid priced belt, Where the FRV belt is built like a tank (maybe overly so if that’s even possible) this is built more along the lines of most US designed high speed gear… It’ll do the job and stand the abuse well, but don’t expect miracles… It’s expected user can always draw another one from stores when their old one wears out.

The stitching is pretty good, not fantastic in its look but certainly rugged enough. When you look at the TMC/Emerson MRB clones that fall within the same sort of budget it’s probably slightly above their build standards, certainly with QC it’s going to be more consistently made.

I found one or two loose threads but before you take that as a negative I’ve seen the same from Haley, Crye, Ferro… in fact the only major business I’ve never seen a thread out of place with from new is Blue Force Gear. Maybe a co-incidence, but despite their quick wearing products they do appear to have nailed the QC side of things.

So who would buy this and why? Well if you are looking at creating a new belt line from scratch or you want to replicate that SEAL Team look without the expense of a genuine Crye MRB then this might be the belt for you. I’d certainly rather have LBX than TMC and it’s not just the heritage of the brand, but that although marketed with a different brand I’d suggest that LBT do keep a good eye on the quality of items coming out of their factories… no ones doing that with TMC/Emerson.

As for the negatives, a lack of buckled outer belt does kind of mean that you would want an additional belt later down the line… The belt will work as a stand-alone but once you’ve put that additional belt in with it you’ll see just how versatile it could be. The belt is spartan in terms of padding, this might be an issue to some but it does mean that it stays low profile. I’d have liked a little more padding but I’d only be able to tell you if it’s essential once I’ve given it a full weekend workout at somewhere like The Trees. I’m generally not one for loading up the whole thing with pouches anyway so I doubt the padding would add much aside unwanted bulk and flexibility.

Sizing comes up a touch small, I’m a 38R in practically all trousers, certainly my Crye G3s are a good fit. The Inner belt is a total length of 46″ inches which given that the belt is meant to allow for 42″-48″ isn’t really going to work. I don’t know about the other sizes but I’d suggest going up a size if your near the top of the suggested fit, also bear in mind that the belt is worn over your combat pants so you’ll want to give yourself a margin of at least 2/3″.

It will also limit your holster options, I generally use a Safariland UBL with a QD plate but if you use a direct belt mounted holster such as a Blackhawk! Serpa or a Fobus you might struggle to find a way to get it all working together. 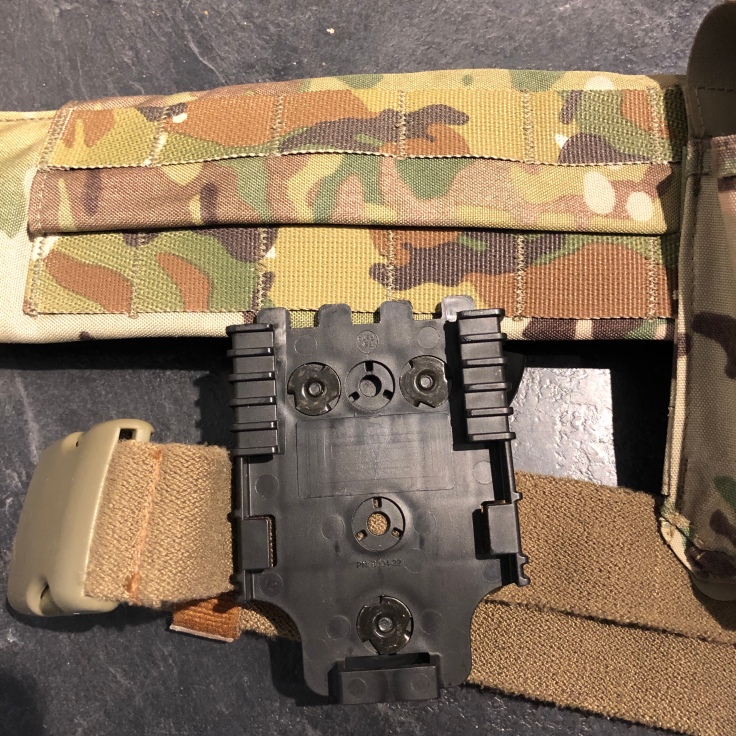 Overall the LBX Assaulters Belt is a modestly priced bit of gear, light on unnecessary features and frills but a worthy purchase at its price point and on first impressions very capable of supporting a full belt rig. It’s never going to attract the more particular UKSF/USSF impression builders but pairing this with a plain 50mm buckle belt and possibly a low profile set of suspenders would give you a very versatile system indeed, certainly that’s what I plan on doing.

Thanks again to Tactical Kit for letting me have the belt, I’ll be giving it a bit of a beating over the coming months as I work towards a SEAL Team loadout. Whilst I do like my old FRV Belt, I am probably going to switch to this and see how it fares.