The very first Airsoft pistol I owned was a Beretta, a spring powered Tokyo Marui 92FS with a fixed hop (it might have even been a pre hop model), All in one slide/barrel and a slim stick for a magazine. Despite all these things I’d scoff at now in a replica, At the time… as far as I was concerned, this was the best thing ever! I used to go to the local comic store, A place called Crackers, Still open to this day and a proper, Independent comic store with your typical regulars and hangarounds… I was,  for a time… One of those hangarounds, But it wasn’t comics I cared about, it was the row of (Now classic) airsoft guns placed coolly inside a glass display cabinet amongst the Warhammer miniatures and the 12″ tall Punisher figure armed with twin MP5Ks. I started off reading 2000AD, A love affair with a short lived series… Button Man Which is about a group of modern day gladiators, Fighting to the death whilst their faceless masters place bets on their survival… Basically akin to a mash up of PUBG and working in retail.

My love of comics never really took off, I was more than happy to pick up the occasional Punisher or Batman comic but I’ve never been much of a comic guy.

On one particular trip into the shop I noticed the owner playing with a toy pistol, I knew instantly that it was the Pistol used by “John McClane” in Die Hard, “Martin Riggs” in Lethal Weapon and virtually every film from Teminator 2 to Leon… A veritable classic, the Beretta 92FS.

Since those days, long ago… I’ve owned a few different Airsoft versions of the 92/93 series Beretta, To put some perspective on how long I’ve liked the design let’s have a quick look at exactly how many I’ve owned…

And finally, the latest in a long line of Berettas… The semi-recently released Tokyo Marui M9 Military Model. The exact model name is rather important, As there are a few models that Tokyo Marui offer… However, Only this and the M9A1 offer a fully functional decocker/safety and an adjustable hop.

Yes, it’s been a long time coming but Marui revamped their iconic pistol and made it into a nail driver. It wasn’t shouted about by the retailers and the players, It was seen by many as an unnecessary release given the sheer amount of GBB Berettas that TM do, And their great performance if paired with .25 ammo and green gas. However this is a little special, And its without a doubt the one to buy if your in the market for a classic 92FS/M9 design. If rails are your flavour, pick up the equally great M9A1… They’re virtually the same design internally.

The overall finish is superb, The barrel has an almost rough texture and the frame feels subtly different to the slide, They also have a slightly different look as well which adds to the realism as the real Beretta slide is coated in Bruniton (A baked on corrosion resistant finish akin to Cerakote), which looks  different to the blued finish the rest of the firearm is treated with.

There’s a real heft to the weight of the pistol… A real positive when Marui pistols being plastic throughout the frame and slide can sometimes feel a little light in the hand. I often bump against people who say “Marui are shit, they feel like toys and I prefer (Insert generic brand) because it feels real!” Now I hate to shit on anyone’s chips, But the vast majority of Airsoft weapons do not feel like a real firearm, even if they’re made from that cheap Zamak shit people pass off as Aluminium. As I’ve often stated, I’ll gladly sacrifice a little realism for a lot more reliability. I’ve had very weighty sidearms, and nice holster fillers they were to… but for the most part they were unable to be consistently drawn and used in anger without letting me down. I’ll 1v1 any other manufacturers pistol against an out the box Marui with full confidence in the plastic Japanese gun.

The sights are fixed within the slide as per a real M9, The sights themselves being a “Snowman” type configuration (Bringing a whole new meaning to the phrase “Do you want to build a snowman”) as opposed to the 3 dot layout of the civilian model. This being a combat pistol there are a number of other small things that you’ll see on this, An enlarged trigger guard for cold weather operations, a wide grip to accommodate a then unusually large 15 round capacity magazine and a straightened front on the trigger guard to be used by the supporting hand.

The trades are consistent with the real M9, a subtle and not unexpected addition of the ASGK and Tokyo Marui markings don’t detract from the realistic look. Its worth noting that to most people, Aside from the markings, This will pass off as a civilian 92 Series pistol (The M9 being very slightly different from the commercial 92FS in only the “Snowman” sight arrangement and a straight lower frame (Referred to as a dust cover) below the slide as opposed to the flared design of the 92  series)

The controls are recreated very well, they work smoothly and offer the full functionality of a real M9. Interesting to note is that the de-cocker completely lowers the hammer, unlike every other Airsoft replica I’ve owned which puts the hammer down to just beyond half-cock… this little touch might not seem like much but it puts a smile on my face when I use it. The magazine release can be swapped to a left hand configuration but despite my southpawness I’ve always been used to a right hand release on the Beretta. 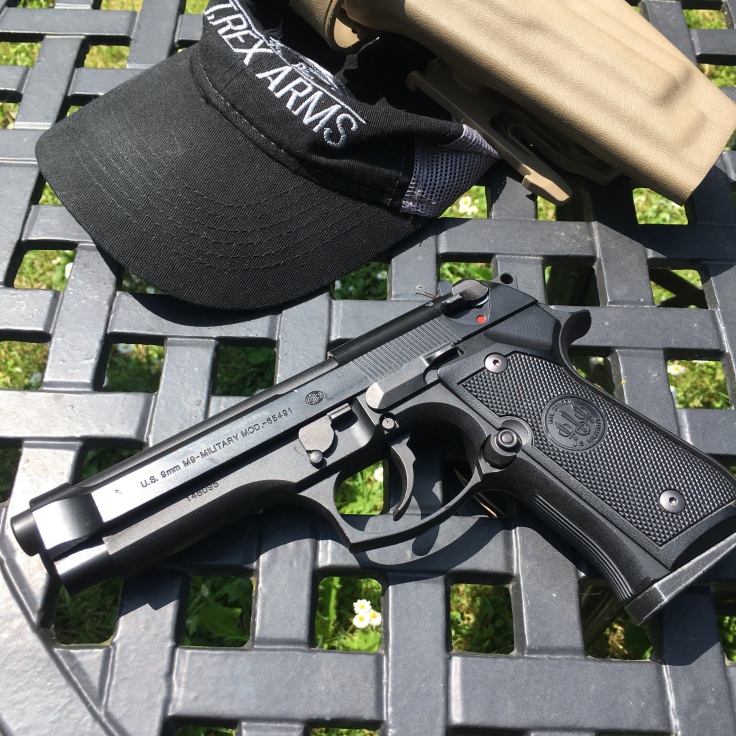 The trigger pull is longer than you’d expect if your used to single action or stricker fired type pistols such as 1911s or Glocks, However for a hammer fired type DA/SA pistol it’s short enough to be extremely usable. The reset is pretty short and rapid shots are not particularly difficult To keep on target.

Stripping the pistol is the same as you’d do with a real Beretta, pushing the button forward of the trigger guard allows the rotation of the locking bar. Then simply pull the slide free of the frame. The removal of the barrel, recoil return spring and rod is simple from there. Your also able to adjust the hop simply by removing the slide, the adjustment is typical Marui with a helpful indication arrow to assist in the adjustment.

The only missing feature is the often neglected Loaded Chamber Indicator on the extractor, it’s not a big issue and would be extremely hard to replicate… There are plenty of owners of the real Beretta 92 Series pistol who don’t realise its there let alone how its used so its really not a big deal.

Accuracy and range is good, I’ll not go into specific numbers as it’s very much a typical Marui pistol… I’d happily use this alone in CQB and if my main weapon broke in a woodland game I’d just dump my gear and grab a can of gas and some ammo.

Overall this is a worthy addition to the Tokyo Marui lineup… I’ve had this for around a year or so now and it’s not had a massive amount of use but it’s always been a faithful companion, Now with the addition of a bargain Safariland 6004 for £25 I’ll be sure to use it a little more, although I’ve got to be honest I’m a 1911 guy at heart.

A final note, The magazines are exactly the same design as the original Tokyo Marui M92FS, a great case in point of “If it ain’t broke, don’t fix it” And in this case it means that your able to buy magazines relatively cheaply. For those looking to add a classic design to their collection or if your after a usable replica for skirmishing, Or simply doing a load-out that requires a Beretta sidearm then look no further… this is the one.