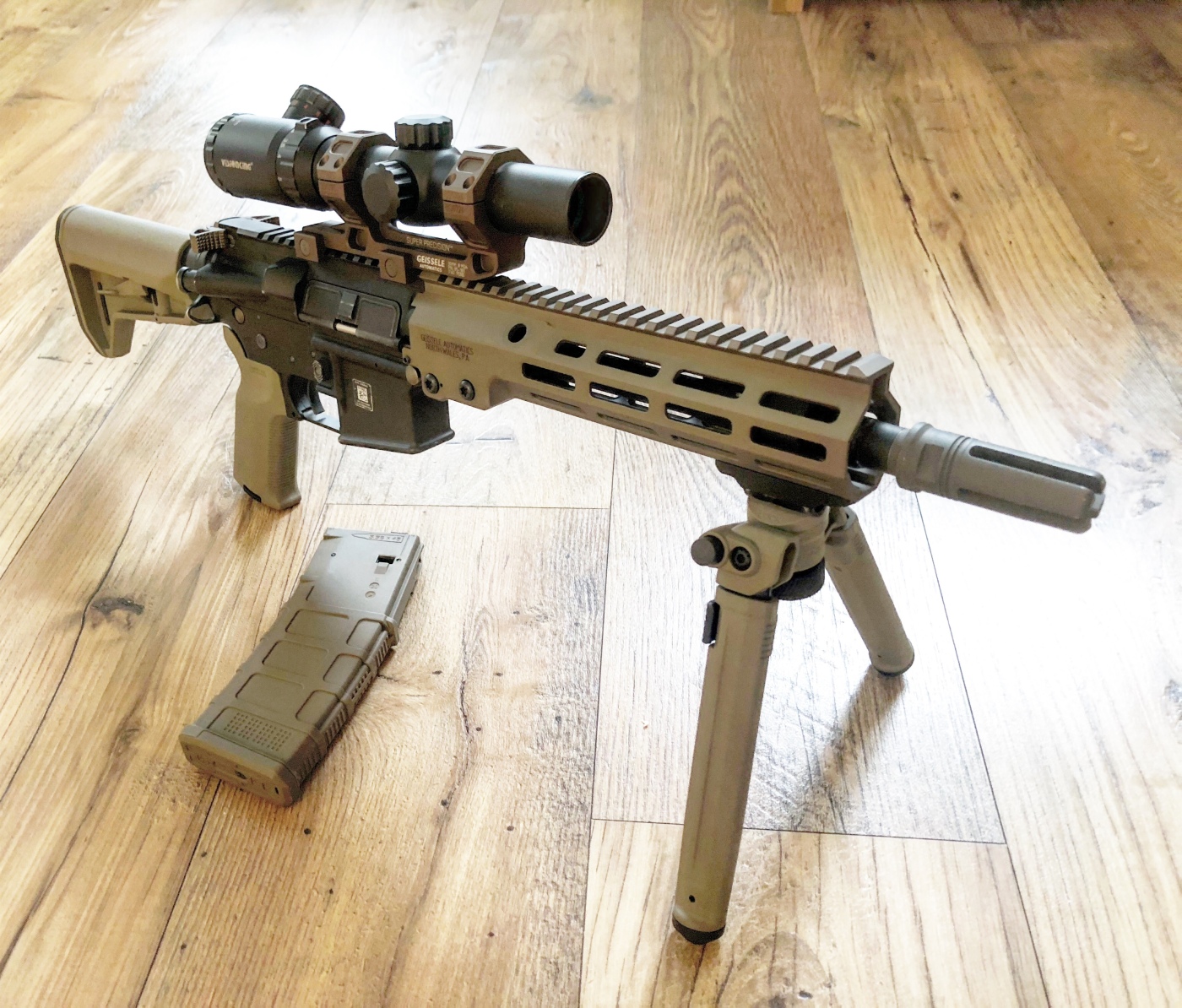 Bipods are cool… There’s no disputing that, but they’re also rather inconvenient in most cases. The tried and tested Harris design is still popular, and indeed being selected for weapon procurement programs such as SOCOM’s ASR program, but it’s not ideal for every situation.

Any weight at the very front of a rifle has much more impact on the handling than the same weight above or behind the hand, it’s simple physics and something that’s led to a number of products such as the GPS Grip Pod or the Accu-Shot ATLAS Bipod being put to market.

Magpul are well known for their lightweight rugged accessories and rifle furniture, it was only a matter of time before they dipped their toes into the world of Bipods.

The Magpul Bipod design is optimised for lightness and manoeuvrability, whilst I know from experience that this bipod is capable of putting a rifle on target at some serious range, it’s real strength lies in its use on a Recce or SBR type build.

A Recce build can mean many things to many people, for me, I’ll generally have a picture in my head of a 14.5” to 16” barrelled rifle with minimal accessories, free floating rail and some form of magnified optic.

However, Magpul have also hinted at its use with short SBR builds where the shooter might occasionally want to shoot from a stable and supported position… Not your typical run and gun stuff, but I can see the benefits of hitting this demographic.

Built with lightness in mind as well as accuracy over range, it should be comfortable to carry over long distances but be capable of hitting out to 600m + when required. For Airsoft this is obviously a pure fantasy, but it’s a fantasy that has inspired many of my builds.

So, let’s look at the Magpul Bipod in a little more detail.

It’s a rather minimalist design, similar in appearance to the ATLAS but with that signature Magpul Polyamide blend being used throughout its design that helps keep the weight down whilst providing a solid base for your rifle.

The M-LOK mounting bracket spans one and a half slots with a recoil lug sat midway between two M-LOK bolts, the M-LOK mounting system has rapidly become a favourite of mine and outside of historical builds, it’s one that I’ll probably use for the foreseeable future. There is a Picatinny version of the Magpul Bipod as well for those still living in 2006.

Both legs are connected to a central hub, this provides a central point of contact to the weapon and houses the in built pan and tilt mechanisms.

Starting with the panning mechanism, this gives the user a full 40° of movement with an option to completely lock out any movement if undesirable to the shooter.

To lockout the pan travel, simply unscrew the knurled locking knob until the panning plate can be swung 180° and then tightened back up. This doesn’t affect the titling action of the bipod and can be swapped back and forwards without specialist tools as the user demands.

The main knurled knob allows the user to customise the amount of friction that it takes to move the bipod around, both in pan and tilt. It works very well and once the bipod is set up, you’re able to move the rifle around with ease but without sacrificing the stability you’d want from a bipod.

The tilt action gives you 25° each side of its central axis, enough to allow for rough ground and also help reload your rifle without moving away from a supported position. This cannot be mechanically locked out, but by tightening up the knurled knob you can make it effectively a non issue.

You can choose between a stowed or deployed position for the legs with nothing in between, unlike the ATLAS design, Magpul have traded customisation for simplicity and durability.

To deploy the legs, simply pull downwards to overcome the over-centre lock, this allows the leg to swing down 45° from its stowed position. To stow the legs again, simply press the bottom on the top of each leg… It’s a little awkward in practice, but it does mean that there’s zero chance of the legs folding up unless you want them to.

Each leg stands at 6.3” and is extendable up to 10.3” with 7 positions available, each at a 1/2” spacing. This should give most weapons a little leeway on how you set up your bipod, but with some bolt action chassis you might find that it’s a little too tall if you’re used to the Harris or another shorter profile bipod.

The legs are extended by pressing down on a button on the side of each leg, a simple design but one that’s incredibly strong. The inner legs are made from 6061-T6 aluminium and the outer legs from Polymer.

The Bipods strength is a feature that isn’t really publicised as much as it could be, polymer and plastic appear to be dirty words when you talk about Bipods, which is odd when you consider it’s use throughout precision rifle stocks, grips and furniture. But this isn’t your usual crappy ABS, it’s Magpul’s Polyamide blend that’s been used for nearly 20 years, more than up to the task its being used for.

The feet are made from synthetic rubber with a staggered “step” profile which makes them rather grippy. Held in by a roll pin, they’re also cross compatible with most ATLAS type feet.

Stability wise, this very bipod has been used to put rounds on target at 1000 yards… Whilst this bipod might not be the first choice for people looking to shoot long range, it’s comforting to know that if needed, it will hold up to long range precision shooting.

As for negatives, the biggest for me would have to be its lack of a canted position at around the 45° angle. It really wouldn’t have been difficult for Magpul to add an additional detent for the locking latch to fit in, but for whatever reason they’ve decided to stick with a single 90° stow/deploy action.

Can I recommend the Magpul bipod? Well yes and no. Whilst for your average rifleman or short to mid-range plinker this would be more than up to the task, I feel that the stability and functionality offered by its (admittedly expensive) competitors make this a second best option for the majority of shooters.

It’s actually odd, but I’d say that for Airsoft it’s pretty close to being perfect. If I had a suitable replica to stick this on, I’d probably end up keeping it. It’s light, easy to use and doesn’t tend to get in the way, but I simply don’t have anything that requires a Bipod except the Mk46 Mod 0 and if that was M-LOK compatible, I’d snap it up in an instant.

Magpul don’t often miss the mark, but with this it feels like they could have made one or two minor changes that would have put this at the top of many peoples list. Having said that though, there isn’t anything specifically wrong with it’s quality or build, it just feels like it needs a 2.0 revision with a few additional features.