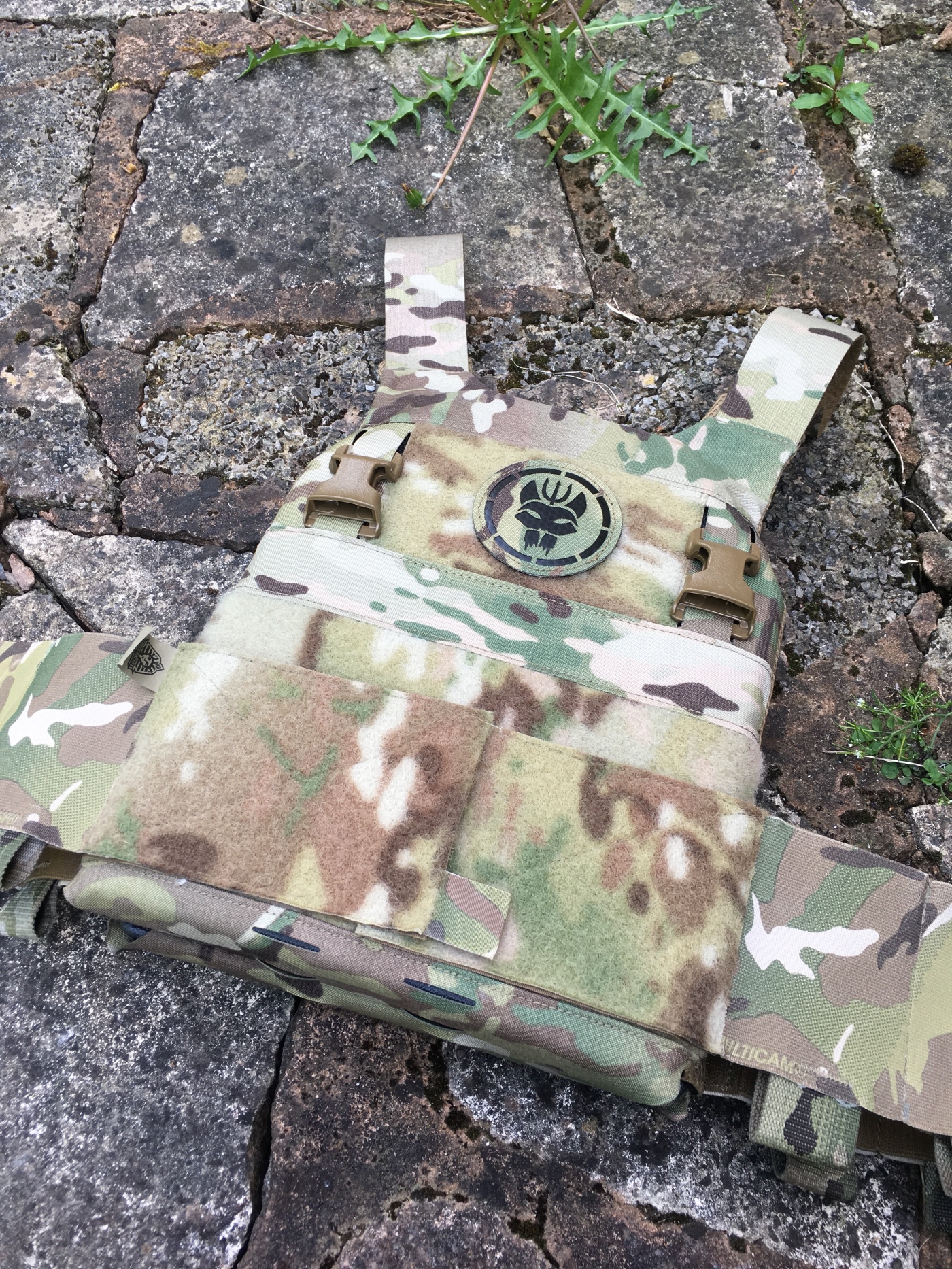 Plate Carriers, I have a love/hate relationship with them…

On the one hand they offer a massive amount of flexible storage, and when well designed and set up they can offer a comfortable and balanced load carriage capability.

On the other, they’re bulky… when set up with plates (even dummy plates) they can restrict movement and make simple tasks such as shouldering a rifle or throwing a grenade that little bit more challenging.

I tend to go through stages of buying and selling plate carriers, I’ve owned “Recon” style carriers like the HSGI Weesatch and the Eagle Industries Rhodesian Recon Vest and more dedicated “Direct Action” carriers such as the Warrior DCS and reproduction copies of the once popular LBT 6094 and Crye JPC. All have had their benefits, all have had their drawbacks.

So, a few months ago I happened to be in the market for a plate carrier, one that would be low profile yet offer an option to attach my D3CR to allow me to scale up/down as the mission required. Initially I was looking for a repro LV-MBAV or possibly even PACA vest, after a pretty open question asking for advice on the Facebook group Real Steel Advice And Sales I was given the same sage advice from a number of people, Including possibly the King of Gear Whores, Maple Leaf Tactical.

With their advice on board and ready to buy some nylon, I went hunting! Unfortunately, large carriers in Ranger Green were out of stock everywhere. Without my preferred colour and size, I stuck to my random logic of buy it in Multicam and Medium (patience is not a virtue I possess) Tactical-Kit happened to have a few bits I was looking for, and a quick browse through their site yielded a couple more last minute “add to cart” essentials (surely I’m not the only one… gotta make that postage count 😂)

There’s less than an inch difference between the Large and Medium plate carriers, If the carrier is going to look silly on my frame, another inch really isn’t going to make much difference.

Upon arrival, I was immediately taken by how light and flexible the carrier is. Being made from lightweight cordura and a significant amount of colour matched loop field Velcro covering over half its outward surface, it also has an unusually soft (for lack of a better word) feel and look about it. I’d be interested to see if I’m not the only one who though this… I’ve come to the conclusion that this being one of the only carriers I’ve owned that isn’t covered in molle, that this one difference probably plays a big role in its feel and appearance.

Don’t let those soft appearances fool you though… this is a tough carrier. Primarily aimed at the Law Enforcement and Security community in the US and abroad, it’s proven to be a big hit, with many reviews and testimonials extolling the merits of this carrier.

Primarily this carrier is designed to carry a pair of ballistic plates… E/X/SAPI, Stand-alone lvl 4, swimmer/shooter cut plates… all good to go. I’ve personally outfitted my Slickster with a pair of cheap nylon FMA dummy SAPI plates to get the look right, although this carrier would definitely be best served by weighted plates.

The carrier is as simple as it is genius, a pair of near identical plate bags joined by Velcro adjustable shoulder straps which enable a massive degree of fitment for small and larger users. The cummerbund is an elasticated two piece type, secured to both front and rear plate bags by hook Velcro on the inside, matching with the loop field on the lower section of both front and rear plate bags. The outside of each end of the two identical cummerbund sections are covered in loop Velcro, this both allows for overlapping of the cummerbund halves and the securing of various items to the front of the carrier (more on this later).

The front plate bag on the 2017/18 version has laser cut vertical slots to allow attachment of various clips such as the industry standard, ITW Nexus QASM clips. This differs from the simple webbing straps on the earlier 2016 version, but both options give the carriers a method of attaching chest rigs or dedicated panels. Personally I’m not a fan of laser cut molle, the overall strength of an item is compromised when you start cutting bits out of it, and the thin material itself is being asked to support the full weight of a fully loaded chest rig or placard whilst donning/doffing the carrier. 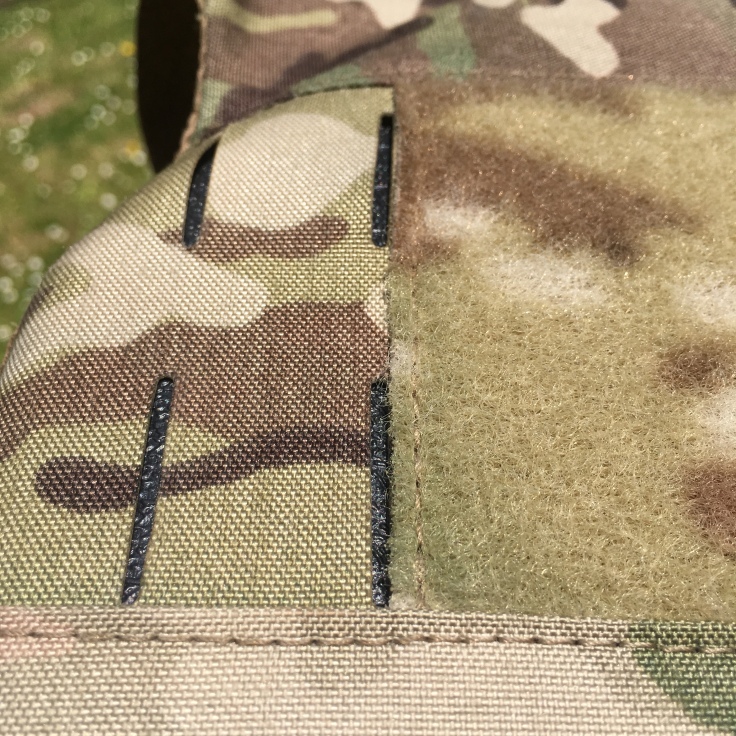 As for options on the front… Ferro themselves make a placard which will attach to the front of the carrier using G-clips and the Velcro on the front. Or other options such as the D3CR or Spiritus Systems Micro Fight Rig are commonly used. The option I opted for was indeed my trusty Haley Strategic D3CR Chest Rig, taking off the lower strap and H-Harness allows the shoulder clips to be clipped into place, lowering the rig onto the front (after securing the cummerbund) the matching Velcro fields affix the rig securely in place.

It works well enough, but a couple of minor gripes which although are pretty minor are still something I don’t like… the female side clips for the D3CR are left flapping around… I don’t like it, they’re made of nylon and make a noise if they hit another hard surface, easily remedied by covering in “Sniper tape” or cutting them off if it’s to be used permanently with the Slickster. Another annoyance is that with a fully loaded front placard its not a simple task to get the cummerbund properly aligned (Although this is my “Velcro OCD” kicking in) 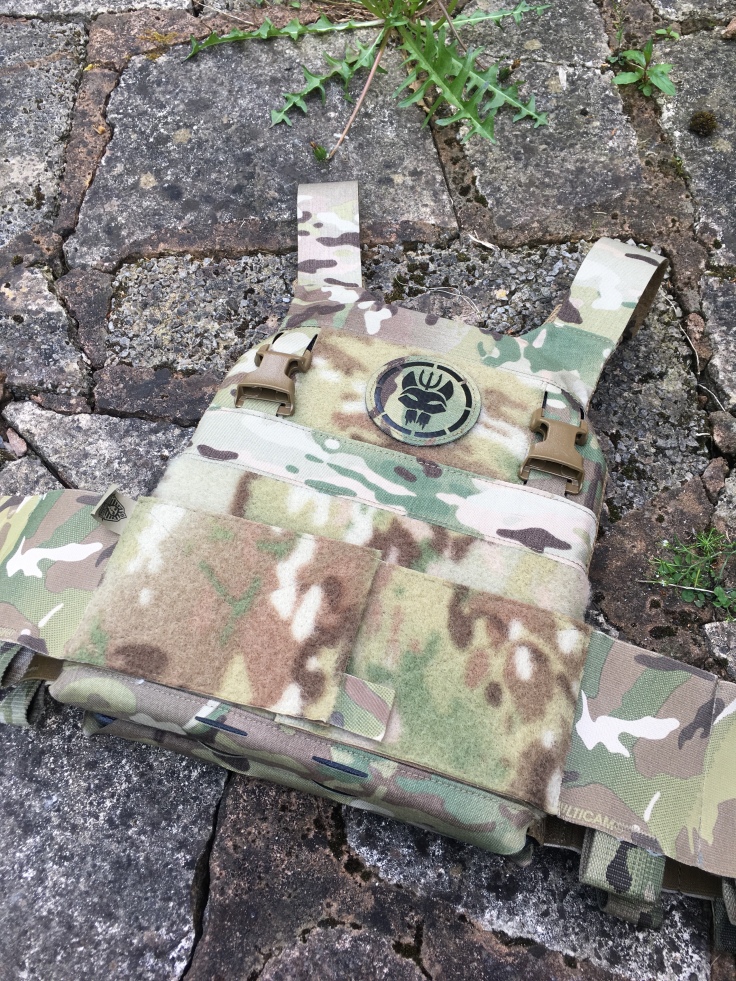 On to the cummerbund, very simply built… it consists of two layers of two-way stretch elastic, not a million miles away from what you’d see on a Blue Force Gear ten-speed pouch. At each end of both “half cummerbunds” is a section of hook/loop Velcro on the inside/outside respectively, the mid section is stitched vertically in three equidistant lines to create four STANAG sized pockets, the bottom of which has a small section of bar-tacked webbing looping around the bottom to retain your stuff. 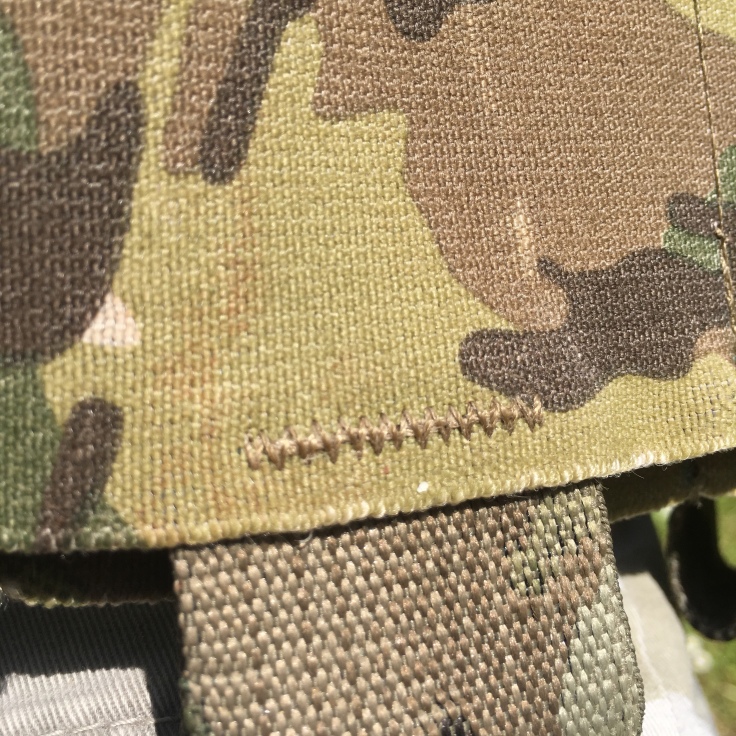 There’s a lot you can fit in these pockets… Mags, pistols, flashlights, knives, radios, pyro, CAT Tourniquets, field dressings, beer… the list is never ending. Retention is good on the cummerbund, I’ve not had anything fall out but items do not easily snag on the elastic and are removed without undue effort.

There’s a number of little but highly appreciated design features on the Slickster… firstly the ultra thin shoulder straps are Velcro loop lined, this allows for shoulder pads to be held firmly if added to the carrier, if left as it is, the loop softens the weight on the shoulder, even a little padding goes a long way.

The padding is a common theme, on a carrier designed as a no holds barred, low profile rig… it takes enough care to ensure that if possible any contact areas with its wearer will be padded, albeit thin mesh padding. The entire inner face of both front and rear plates are lined with this mesh.

On the inside of the bags you’ll find a retainer for soft armour inserts, also the excess strapping for the shoulders feeds into the rear bag (take care to avoid it from bunching, as this can lead to an uncomfortable fit and an odd appearance).

The plate bags are sealed at the bottom in the conventional Velcro flap method, this also allows for the attachment of hanger pouches… also there’s laser cut outs for use as a CAT Tourniquet holder on the flap, not something I feel is needed due to the cummerbund but it shows a certain level of thought for those who might have requested it.

The straps themselves are easily adjusted using the supplied plastic tool to allow the strap to glide freely until the correct length has been found.

Overall I can’t really fault this carrier… quality is outstanding and the sheer scalability of this rig is awesome… if you were to add just the Ferro wing pouches and a triple mag front placard you’d be able to carry  an astonishing 11 magazines plus two radios! although this is hardly designed for that level of load carriage and even Ferro offer a more suitable Direct Action carrier in the FCPC.

I am actually parting with this plate carrier, for all of its strong points unfortunately it’s just not something I use a great deal. In its last 3/4 months of ownership I’ve worn it once in “anger”… comfortable as it was I’m just a chest rig kind of guy. The great news is that my tried and tested formula of “buy it in medium and Multicam means that it should hopefully be an easy item to sell and I’ll only lose a small amount of what I’ve paid.