The words alone don’t really do that quote justice, to understand how passionate JFK was about that challenge you’ve really got to listen to it… If you listen with your heart, you can really feel the absolute desire and lack of willingness to compromise. It helped inspire a nation to put a man on the moon less than 8 years later (or at least make it appear so 😂) and may have in part contributed to his own demise… But we’re not flat earth vapour trail consuming lizard people here, so let’s get back on track. I wanted to mount an M203 onto my MWS… Is it possible? Yes… is it straightforward? Not really.

The M203 grenade launcher was developed in the late 1960s and released in service on the same year man set foot on the moon… 1969. It was designed to replace the standalone M79 grenade launcher, the theory being that a grenadier didn’t have the ability to easily carry an M16 and an M79, thus in close range engagements he would be left with just his sidearm for protection. 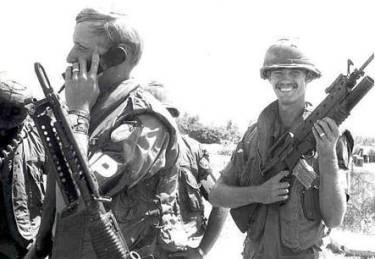 Attaching a grenade launcher to a primary weapon gives that soldier a more rounded fighting capability and gives him the option to choose how to engage a threat with either or both weapon systems. It’s been a divisive weapon, from Vietnam to Afghanistan, soldiers have loved and hated using the M203 with some praising is force multiplication for their small squads and others hating its unwieldy effect on their rifle and reporting malfunctions and even launchers falling off rifles.

Many soldiers have eschewed the virtues of the M203 in favour of sawn off M79 “pirate guns” and M320 standalone launchers, it’s apparently gone full circle with the emphasis now on separate systems for launching 40mm Grenades throughout most previous M203 users.

No matter which side of that fence you fall, there’s no disputing that it’s an iconic piece of the M16/M4 jigsaw and one I’ve always wanted to add to the collection.

G&P have some of the nicest looking replicas on the market, from LMGs to Rifles and Grenade Launchers they certainly have a fine collection for the discerning collector. When I was looking for an M203 to mount under my MWS I had a few non-negotiables, it had to tick the following boxes:

The first thing I did once it arrived was to “dry fit” the launcher, as expected (but still mildly disappointing) the launcher does not fit the stock MWS delta ring. The rear bracket is slightly too small and in addition the captive bolt on the bottom of the MWS delta ring assembly is in the way. Now it’s an essential component for the Marui delta ring to stay in place but Jon from Wolf Armouries had assured me that by using a king arms AEG delta ring which completely replaces the Marui one he’d successfully fitted a G&P M203 to a customers MWS. A fine piece of workmanship indeed, without seeing the below pic of the finished rifle I’d have not risked the procedure myself.

Well, life throws up a bunch of surprises and it just so happens that the element Delta Ring isn’t quite a perfect match. I’m an impatient sod and so I decided to throw caution to the wind and approach the problem my own way…. the loud and violent way.

My original plan had been to dremel out the M203s rear mounting cradle where the delta ring screw bracket is situated to make it fit, this was a ballsy option as once I’d started removing material the option to return the M203 was well and truly gone. I’m not really one for half measures and with a Spartan thirst for death or glory and JFKs speech rattling around my head I commenced cutting.

The material is easy enough to cut into, using an appropriate router on my dremel I soon had a fair amount of material removed from the lower section, it’s not the prettiest job in the world but it’s hidden from view by the barrel itself. I stopped and checked a couple of times, the key thing to remember being that removing material is easy… putting it back on is impossible. 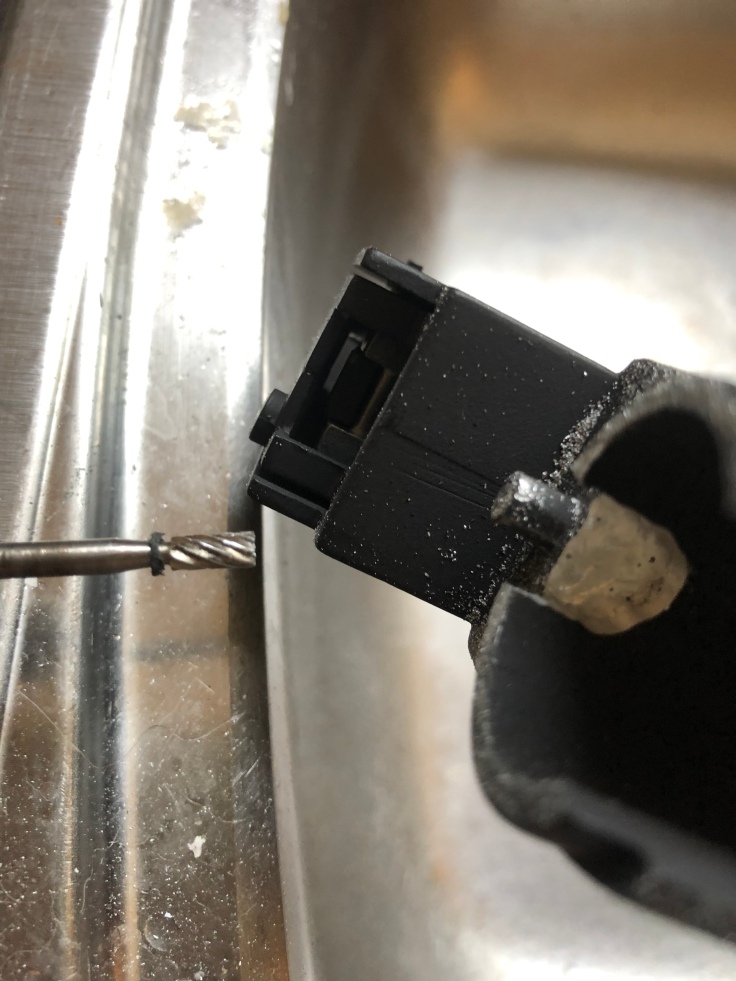 Once I was happy that enough material had been removed, the next task was to sand down around the whole of the rear barrel mounting cradle. The MWS has a delta ring that replicates the profile of an M4 barrel. It’s mostly accurate in shape but it doesn’t marry up with the G&P M203. Not a lot is needed to be removed… the trick is to stop and check, stop and check. 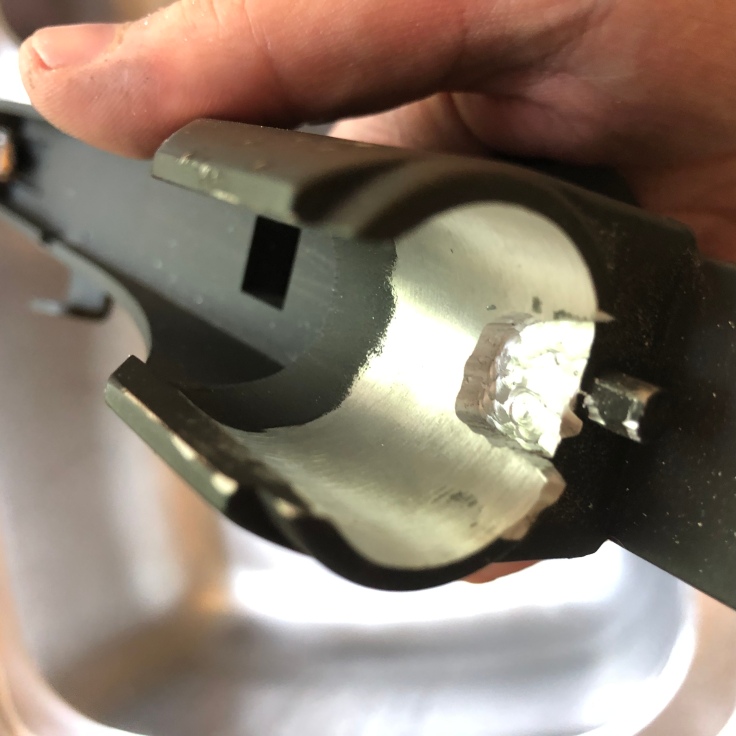 You want a snug fit where it’s not going to come loose, there is a lug on the bottom of the M203 (pictured above) that you should be able to slot into the delta ring. This lug is primarily to prevent rotation of the launcher once affixed in place, it also ensures that its fixed exactly where needed… It’s the one part of this installation that gets anywhere near to “Plug and Play”. 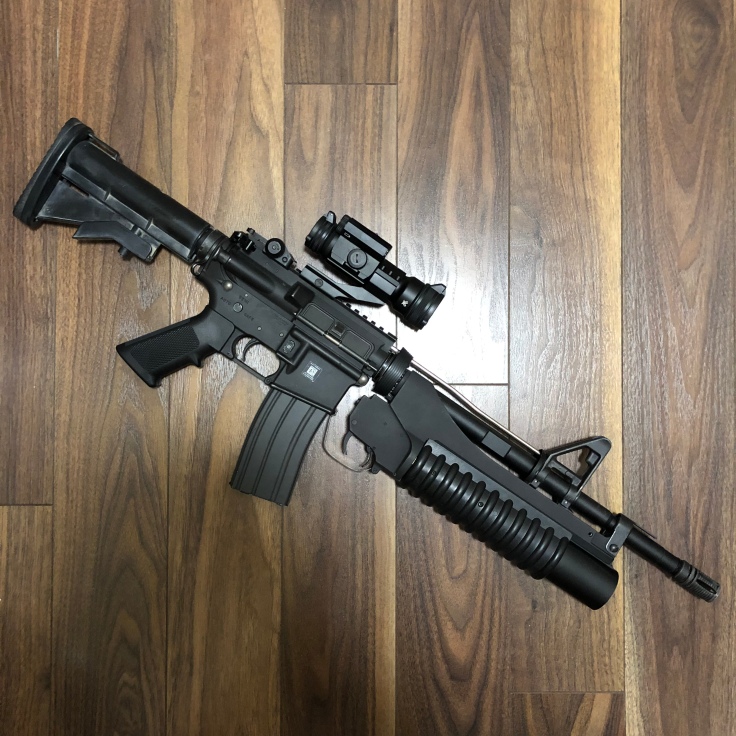 After this it’s quite simply a case of bolting on the front barrel mount and then replacing either the KAC RAS rail or plastic handguard, whichever your chosen handguard it should now fit without wobble or fuss.

And there you have it, there’s not many steps and it’s relatively easy to do. It’s a fantastic look and at this point there’s only a handful of MWS’s with a barrel mounted M203, a classic look on a fantastic Airsoft platform. The fitting of an M203 to the recoil series should be much the same, although the amount to be cut will vary depending on the shape and size of the recoil’s delta ring assembly.