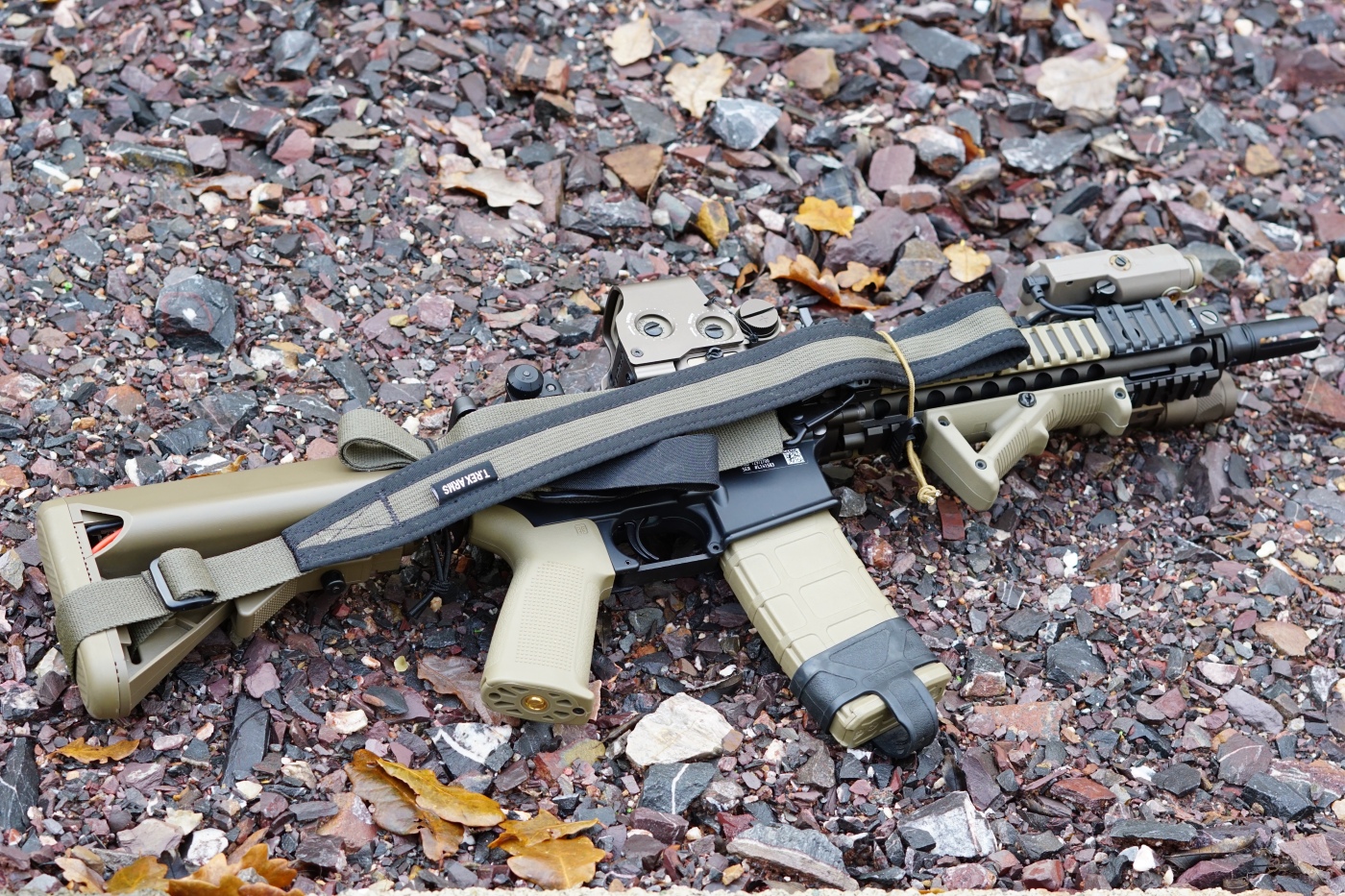 Slings, they’ve pretty much run out of ideas haven’t they? Well yes, but actually no.

Whilst there’s not been any radical changes in the last decade or two, we have seen the humble “2 point” evolve from a simple webbing strap to an essential part of a tactical shooting platform.

The idea that whatever is available right now is “Good enough” can lead to a complacency from end users and a lack of innovation from manufacturers. Although I have a number of slings that work very well for me, it’s dangerous thinking to start assuming that there’s no room for improvement.

Even with this sling, I’ve not seen anything truly unique. The design itself is a conglomeration of different designs, with an emphasis on cutting out anything that’s unnecessary whilst adding features that will benefit the end user without penalty.

T.Rex Arms hinted at developing their own sling maybe a couple of years ago, but released pictures haven’t really shown off the full design, the team have been careful to not release too much in the way of pictures or videos to see how it actually works until it was ready to drop.

Whilst many people will have a preference, it’s definitely worth exploring both options before making an informed decision.

The inclusion of a loop instead of a toggle to adjust the sling is also a feature that up until now, I’ve only seen used on one other sling: The TacBelts U.K. minimalist sling. A loop (when you think about it) is a far better option than a toggle, the ability to use just your thumb to action a sling makes it a lot easier to move from slung to ready, and back to slung.

Whilst the Ferro Concepts team have decided to go towards a very much bespoke toggle on their current Slingster line and other manufacturers still appear content to remain with a toggle, I can see loops being used far more commonly in future sling designs.

Another fantastic feature which is central to the sling’s design, it uses zero metal components and has zero mechanical parts. No springs to fail, No bolts to fall out, No pins to bend or buckle and no joints to jam up. The sling works solely through the force of friction, which helps ensure reliability.

The “hardware” that comes with the sling is simple and minimal but very well chosen for the job in hand, T.Rex Arms have taken a less is more approach to the sling, with an emphasis on choosing exactly the right part for each job.

A black ITW Nexus tri-glide sits on each end of the sling, ready to accommodate your choice of fixing point. No clips, hooks or QD points come with the sling so it’s important to note that you’ll need to factor this in when loading up your shopping basket.

One end of the padded section is home to a black 1.5” – 1” ITW Ghillietex reducer, this acts to not only bring the width of the sling down from the 1.5” padded section to the 1” webbing, but also to act as a pulley of sorts.

When used in the standard throw orientation, this reducer allows the webbing to smoothly move back on itself to enable the user to change the length of the sling.

The key piece of hardware though, is the black American Cord & Webbing SB-1W (Single Bar – 1” Wide) strap slider/adjuster. This item provides an omnidirectional friction lock, making the possibility of a dual throw sling a reality.

Using friction as opposed to a mechanical lock (like the Ferro Slingster) does mean that you have to work a little harder to move the sling around, but I actually like the more tactile feel of this, it reminds me quite a bit of the Blue Force Gear Vickers VCAS sling which I used for a number of years. Plus, the loop enables the sling to be actuated with greater ease, balancing out the slightly harder pull.

The loop is made from black laminate, thin but strong and able to hold its shape but fold flat without creating any bulk. The loop is sewn to the outer points of the slider which allows for the friction to be reliably overcome, without any potential snagging risk.

The webbing itself is the standard 1” wide stuff used on practically everything nowadays, mine being a Ranger Green sling is made from Ranger Green webbing, there is plenty of length on both the shoulder and muzzle ends to allow for a wide variety of mounting types and body shapes.

The padded section is another section that marks itself as different from what else is on offer at the moment. Fixed in position and non-removable, it allows the sling to remain low profile and cuts down on hardware (does anyone really take the pad off their Ferro Slingster anyway?)

A colour-matched Ranger Green cordura runs the length of the outside face whilst the inner face is padded with a thin layer of black foam spacer mesh, which both feels soft and provides a degree of breathability. The outer edges are sealed with a black nylon trim, giving the sling it’s distinctive two-tone look.

The fit and finish of the sling is excellent, bar-tacks are used throughout and the stitching in general is impeccable. Certain areas of the sling that could present a snagging issue have been thoughtfully designed to eliminate any potential issues.

A pair of silky labels proudly state “T.Rex Arms” with the inner label also displaying their “T.Rex” logo and “Made in USA” tucked on the rear. The only mystery is, who exactly makes this sling? Most T.Rex Arms soft goods being made by Coyote Tactical, it could be either the same guys or potentially (shock! horror!) made in house or by a yet unknown nylon goods manufacturer.

A final little flourish is the inclusion of a pair of sling retention shock cords, one coyote and one black, both outfitted ITW Springloc cord adjusters. These come in rather handy for holding the sling against the rifle whilst in transit, I tend to only use one, so the other has since been donated to another rifle.

So I’ll be honest, I didn’t hold much hope for this new product before actually getting to grips with it. I figured that I’d just use it and then swiftly move back to one of my regular slings. But the more I’ve used it, the more I realise that it’s using the features from many of my favourite slings in one package.

After watching T.Rex Arms excellent video tutorial (embedded here on their website) on how to fit and use the sling, I realised that after being comfortable for so long with other (very good slings) that perhaps for certain people using certain set ups, this could bring out the best in some users performance.

The reverse throw is what I’ve found to be most useful, enabling much faster shouldering of the rifle, mostly because my hand is moving a lot less to go from sling to rifle. Standard throw is what most people might be used to, but I’d urge those of you who haven’t tried it before to give it a go.

So, downsides? Well it certainly isn’t in the design or quality. Say what you will about T.Rex Arms outspoken CEO, Lucas Botkin. After the hundreds of thousands of rounds he’s put down range, he’s probably forgotten more about shooter body dynamics than many of us will ever know, and it absolutely shows in the design of this sling.

You’ll also need to buy some form of loop hardware if wanting to mount this using its “reverse throw” orientation, the way in which its designed means that you literally have no other way to achieve this without an additional loop fixture.

It might not have yet been seen “in the wild”, but I’d put money on the guys at various “boathouses” and “killhouses” putting a T.Rex Arms Sling on their rifle to see if there’s a benefit to be had.

It’s not a “cheaper alternative” sling, within the world of tactical goods it’s priced competitively at £59.99 (which is £5.04 more than what you’d pay for a Slingster and exactly the same as a BFG padded VCAS – prices as of 17/12/20), I do think sometimes that a certain item’s value is inflated by their manufacturers based upon the perceived demand or “clout” that an item will offer its owner, not representative of the cost of an item itself.

I can’t begrudge them this though, it’s just business, and making money before your design is copied by 50 Chinese clone companies is a never ending race, that many of these manufacturers have to endure each time they release a product. It’s also a difficult thing to quantify, the cost of a sling that won’t drop your weapon in the dirt and does exactly what you need of it, thats priceless.

This sling was purchased from Tactical Kit, who are the UKs primary source of T.Rex Arms products. They keep most items in stock where possible with regular restocks when demand outstrips supply, which is all to often the case when looking at certain manufacturers such as Ferro, Spiritus and of course T.Rex Arms.

The sling is also available in Black, Coyote Tan, Wolf Grey, Multicam Black and regular Multicam (which also has Multicam trim). Personally though, the Ranger Green/Black combo is the most appealing.

2020 might not have given us much in the way of tactical gear, but this is probably one of my favourite bits of kit to come out of an otherwise uneventful year.