Sometimes I’m a little set in my ways, change isn’t something I find easy to embrace. With my replicas I certainly prefer the classical lines of an MP5 over the Scorpion EVO 3, this same “old over new desire” carries across to most of my preferences.

Making the jump from a traditional quad rail to M-LOK is something I genuinely wasn’t sure about, however… The weight saving alone is a massive incentive. Combined with the fact that M-LOK is starting to be seen more and more “in the wild”, I took the opportunity to grab one of these rails for myself.

Now choosing a rail isn’t usually an easy choice, but with the majority of rails being either Keymod or M-LOK… I looked into what the guys in real life were using. As you can imagine, there’s a lot of variety out there but one rail that keeps popping up is the Geissele SMR range. The Geissele SMR (Super Modular Rail) is what you’d tend to see on a lot of 416 builds, however… It was their recent Mk16 rail that had caught my attention.

The Geissele Mk16 rail forms an integral part of the URG-I (Upper Receiver Group – Improved) program, this being an incremental update to M4 rifles in service with Army special forces units in the US.

Whilst it’s very unlikely that you’ll see these rifles being used by tier one units like DEVGRU and CAG, there is evidence to suggest that the reign of the 416 won’t last forever.

So, back to the rail. Why did I buy it and what do you get?

I bought the rail as part of a complete overhaul of my Tokyo Marui MWS GBBR (Reviewed Here), the idea being that I would look at only bits that would be useful for a night vision compatible rifle. It just so happened that HAO has announced a 9.3″ rail and it fitted exactly the type of look I was after. Basically, I saw the below picture and fell in love. 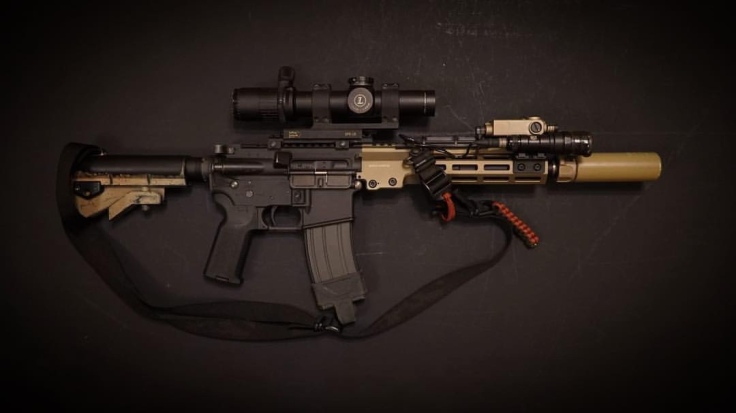 A word of warning to you all though, don’t drink and buy. I have an occasional weakness of buying things when I’ve had one too many pints, it al seems like a good idea at the time but it often results in silly mistakes. This time it was a simple question of a couple of inches… I ordered the 13.5″ rail by mistake, a combination of my stupidity and the simple fact of the 9.3″ not yet being available.

I’d mistaken their announcement that one would be made soon with an actual release, oops. Obviously when it turned up I was a little confused, but I decided to make the most out of it.

The HAO clone is literally that, A clone… And a very convincing one at that. It’s not the only one on the market though, both Angry Gun and Z-Parts offer their version of the URG-I and with their individual fans and detractors there’s probably enough of a market for all three to grab a portion of the market share.

However despite HAO generally being considered as a high end manufacturer, their rail comes in cheaper than the competition at an affordable £80 ($105 on their site). So is this an indication of a drop in quality from their norm? Or is this a direct tactic to disrupt the market and swing a little business their way? Let’s have a look at the actual rail and find out what’s going on.

The rail arrives in what I can only call an “extremely stealable” looking package, wrapped with HAO branded clear plastic and leaving the postman with a mere google search away from finding out what’s inside. Whilst I love this little flourish it might account for the odd occasion where HAO packages have vanished into thin air.

Inside the packaging your eyes are greeted with an individually wrapped rail, barrel nut and small bag containing any other essential hardware.

The barrel nut is a thing of beauty, well it was before I installed the rail and probably marked it. Designed to fit with absolutely zero movement once fitted, it’s an exact fit to the rail itself. The barrel nut is of a design that 416 owners will recognise, being a pretty straightforward round nut with a groove for the cross bolt to sit inside. This both provides a secure fit that prevents barrel wobble whilst not requiring barrel shims such as needed on Daniel Defence or Knights Armament Company’s rail systems.

The rail fits over this nut like an extremely snug sleeve, you’ll literally feel it pass each and every subtle line on the nut as you slot it into place. Taking the rail off might prove rather difficult so be sure that your happy with it all before fitting the rail into place. A light misting of oil on the barrel nut to aid in installation is recommended for the real Geissele rail and I’d suggest that in the future I’ll be doing the same.

The main securing method for the rail though is the aforementioned rail mounting “cross” bolt, this pair of bolts go across the rail from side to side with the front bolt interlocking with the barrel nut. Both are joined with a proprietary “press nut” which straddles both bolts and spreads the load of the rail over the whole barrel nut.

The rail is simplistic in its design, a single MIL-STD-1913 “Picatinny” rail sits at the 12 o’clock position with M-LOK slots at the 3, 6 and 9 o’clock positions. If this wasn’t enough, there are also M-LOK slots on the diagonal portions of the rail as well. Overall, this sheer amount of M-LOK modularity allows for almost unlimited customisation of your rifle.

A pair of QD sling mounting holes sit on the upper diagonal portions of the rail, just rearwards of the M-LOK sections but far enough forward to not interfere with any optics or the rifle controls.

The trademarks are faithfully reproduced and from the photos I’ve seen, the HAO clone appears to have gotten them spot on. I’ve opted for the military NSN stamped markings but Federal PN Batch codes are available if you’re looking to recreate a specific build. I’m not sure if these markings are unique to each rail, I’d certainly be surprised if they are.

The colour is also a faithful reproduction of Geissele’s DDC (Desert Dirt Color), although it’s worth pointing out that Geissele themselves state that DDC isn’t a specific colour code, rather a variable tone from batch to batch. The colour does appear to change depending on the light, going from dirt brown to almost grey green in certain lights. 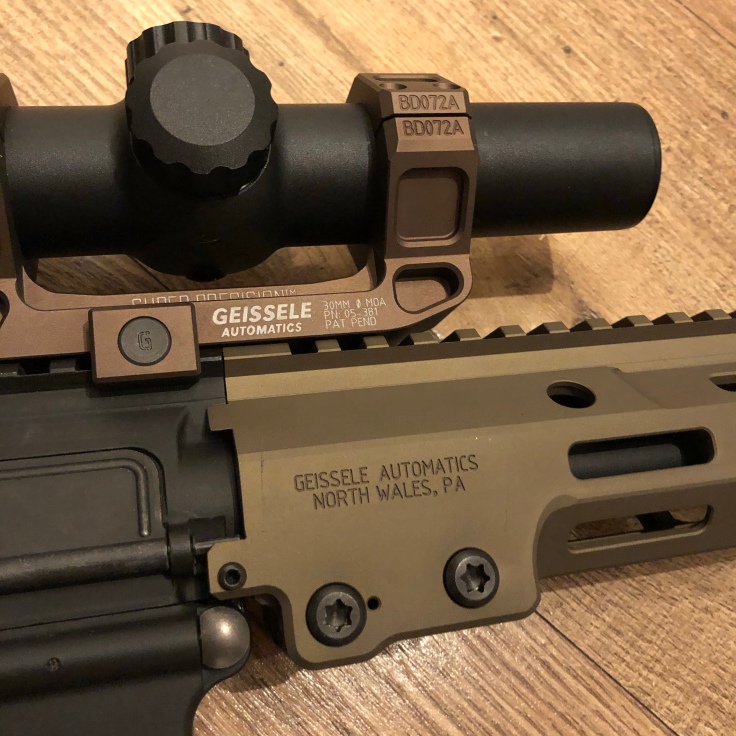 It’s not really a surprise that HAO’s rail is so close to the original, unlike other brands that might use a combination of educated guesswork and other, similar rails as a guide. HAO always strive to take direct measurements from a real item and clone it not only in its shape but also in its construction methods. This is also evident in a recent review I did for The Reptile House on the Super Precision Scope Mount (reviewed here).

In terms of compatibility with M-LOK components, I can only tell you that I’ve managed to fit items from Haley Strategic, Magpul and BCM to the rail without any issues whatsoever. The rail is reputed to be to an M-LOK Standard (although not technically certified by Magpul who own the M-LOK patent).

I’ll be perfectly honest, I will be trading this in for the 9.3″ rail when it’s released. That’s not to say that this is a bad rail in any way shape or form, it’s just a little too long for what I have in mind.

Quality wise, I cannot fault the HAO Mk16, from the bits that you don’t see to the bits that you do it’s a flawless reproduction. The only thing that terrifies me is the inevitable marks and dings it’ll get once I start crawling through murder holes and windows with it. 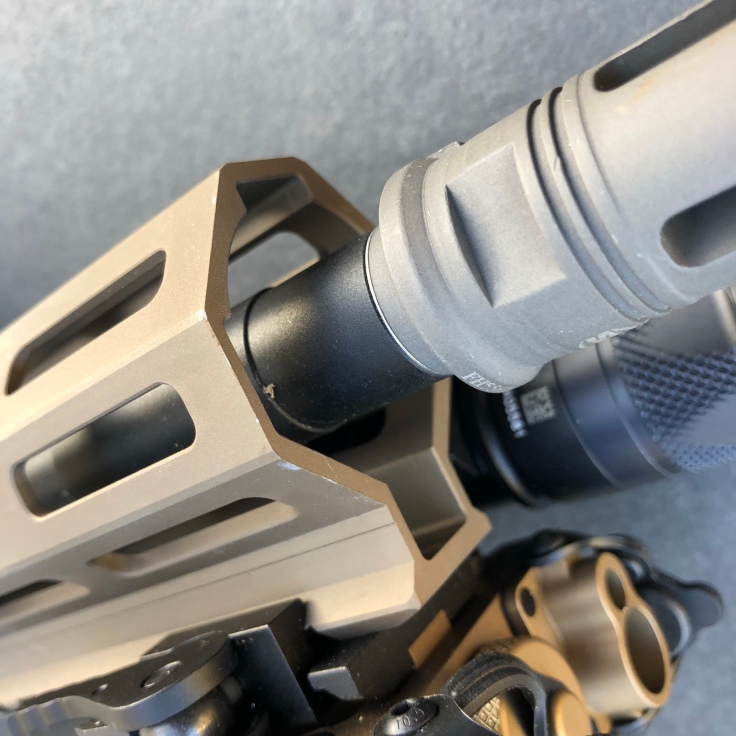 Would I recommend it to a friend? Well, yeah… Absolutely!

I’m actually selling this one to a good friend of mine for his Smith & Wesson M&P15/22 rimfire rifle once the shorter rail arrives. I wouldn’t have given my seal of approval if I’d thought in any way this wouldn’t make a suitable handguard for his firearm.

Part 2 of this review will cover the 9.3″ rail upon its release, I’ve heard rumours of an early 2020 release date but I’ll be sure to update you once it’s here.