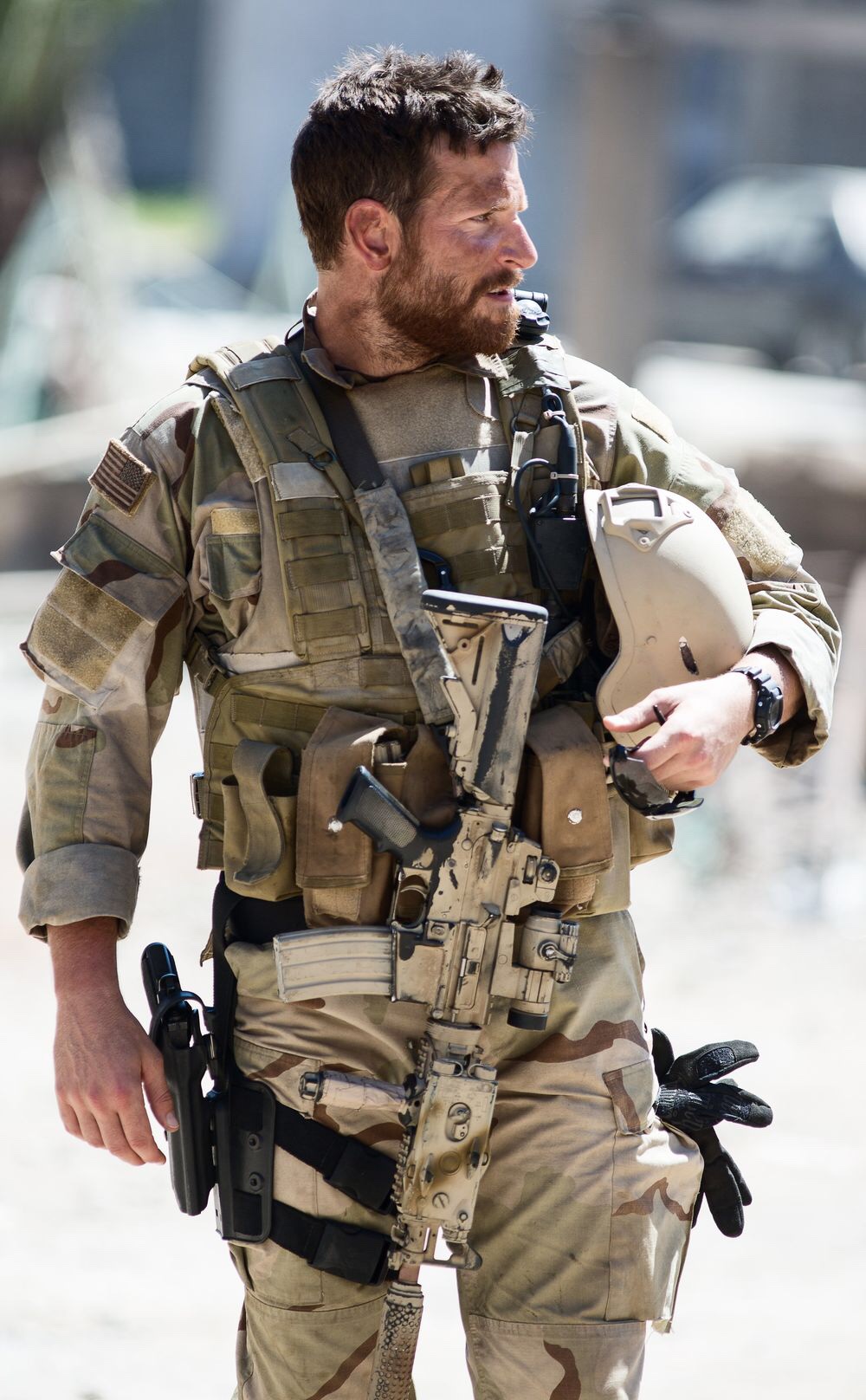 It’s been a couple of months since my last gear anatomy where I covered Tears Of The Sun, It’s a labour of love whenever I decide to go “balls deep” into a movie or TV Show’s kit list but I have to admit it does frustrate me when I know it’s a simple bit of kit but finding the exact one isn’t as simple as typing “SEAL Team jacket” into google.

Often it’s one of you guys, someone who reads the article that’ll come up with the key bit of information that helps me track it down (See “The Hunt” for more information on this). I try to keep adding to each and every one of these as more information becomes apparent. Ultimately they are there as a resource, A guide on what to use should you wish to recreate a certain loadout or desire a bit of kit you’ve seen.

The American Sniper article is one that I have been meaning to do since day one of ATRG and it should be known that I have a love hate relationship with American Sniper, on the one hand it’s an enjoyable and thought provoking film but on the other, I feel there was more of a story to tell that for the sake of political film making just didn’t happen. Much like 13 hours: The Secret Soldiers Of Benghazi it’s been used by both sides of the political fence to define the other.

It’s not an easy tale to tell, So soon to the events portrayed and with the conflict The movie has been accused of not delving into Kyle’s mental battle, however I think Clint Eastwood (Director) and Bradley Cooper (Who portrayed Kyle) actually our across his feelings in a pretty subtle way. Survivor Guilt, Haunted by the choices he had to make and a constant battle with his demons. However this is only touched upon lightly and if you’re after a more comprehensive look at PTSD I’d recommend a read of Battle Scars by Jason Fox, I’ll get into the core of what we’re here to look at…

Chris Kyle was a Sniper serving as part of Charlie/Cadillac Platoon, SEAL Team 3 in Iraq as part of the Global War on Terror (GWOT). It was a time of transition in terms of the equipment used on the battlefield, evidenced in the film by the sheer amount of different weapons used by Kyle over the space of four combat tours.

Primarily his role was that of a sniper, providing overwatch for other units during urban operations. As such, his gear is somewhat heavier and better armoured than you might think of as a typical sniper loadout. The use of a plate carrier and ballistic helmet might not be what you first associate with sniping but in a highly dangerous environment such as Ramadi, it’s essential lifesaving gear. 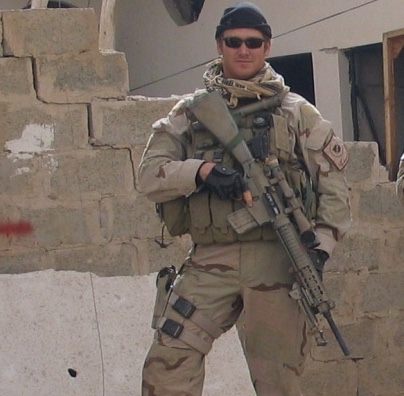 I’ve broken this article down into two sections… Gear and Weapons, looking at his combat load-out and the applications they would have possibly been chosen for, As I started doing the research it’s surprising how far down the rabbit hole you can go, With impressions there is always that little bit further you can go and it’s a personal choice as to how you approach it. I’ve seen some cheap and very good impressions done in the past and on the other hand you can spend a lot whilst not quite nailing that look your after. Do your research and work out what the essential bits are for your overall goal. 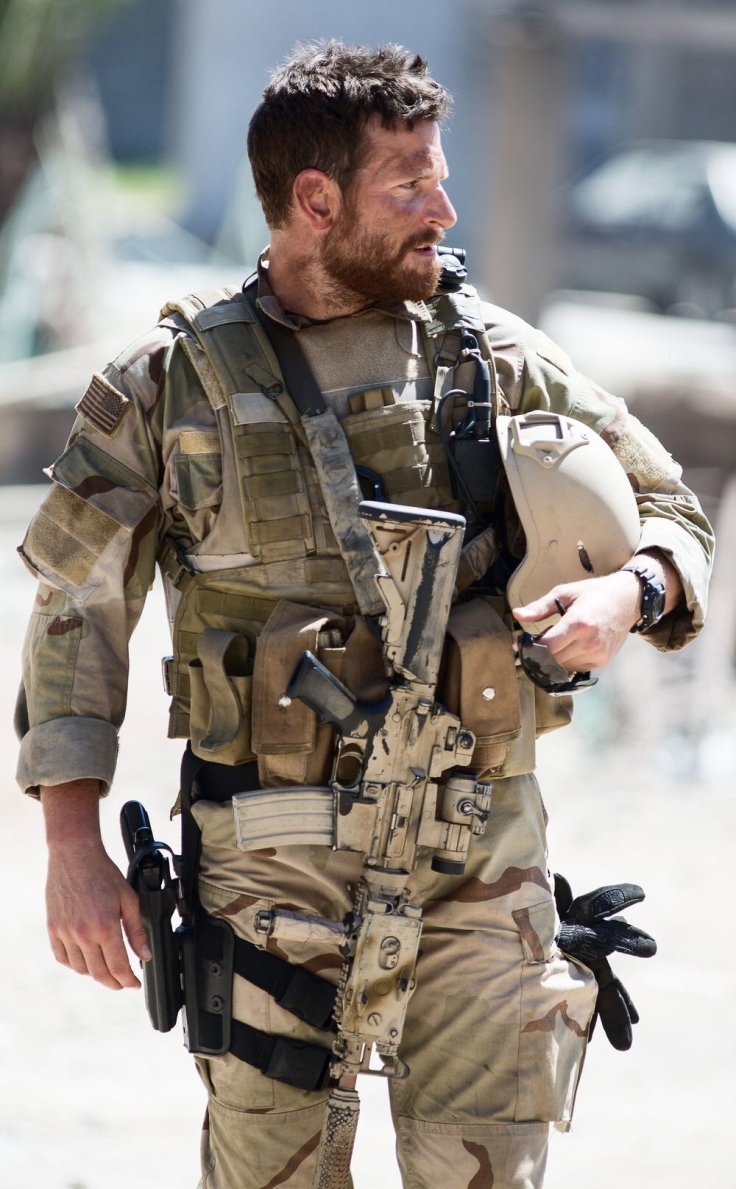 American Sniper crams in a lot of hardware into its 132 minutes, From pistols to long guns there has been a pretty good amount of research done as to what Kyle used. So as we go through the weapons I’ll try and provide a little detail as to why this weapon would form part of his arsenal.

Kyle (Along with many other SEALs) carries the Mk18 Mod 0 whilst not in his sniping role, it also sees a considerable amount of screen time as when using a bolt action rifle he appears to carry it for infil/exfil to his OP location.

The attachments used are generally the same throughout the film, bar a couple of changes to reflect newer equipment. The stock is of the standard Crane type seen on many weapons of that era, perfect for airsoft as it allows ample battery storage.

The fore-end is a Knights Armament Co RAS with one of their vertical fore-grips attached. The suppressor is another KAC item, Their QDSS-NT4 which is a staple of early 2000’s loadouts and a good looking addition to many M4 pattern rifles.

The laser unit swaps from an AN/PEQ 2 to an AN/PEQ 15 halfway through the film but I’d say that the AN/PEQ 2 is a more aestheticly pleasing option for that era. There are not many good repros of the AN/PEQ 2 apart from the G&P model but you could possibly find a genuine one for a relatively good price if you know where to look.

The red dot is an Aimpoint Comp M2/M68 CCO on an Aimpoint QRP Mount, this is Co-Witnessed with the standard post sight on the barrel and a cut down “carry handle” fixed rear iron sight.

Early on in the film, Kyle carries a Mk13 Mod 0. This rifle is fitted with a Macmillan A2 Stock, Nightforce NXS 8-32×56 Scope, A MIRS Night Vision Rail (Presumably To Mount an AN/PVS-22) and a Harris Bipod. The suppressor on the front of the Mk13 is an M110/SR25 KAC Suppressor.

This weapon makes a couple of appearances before being swapped out on later tours for other weapons.

Kyle equips himself on certain missions where volume of fire might be as important as precision by using the KAC SR25 Semi-Automatic Rifle, This has been seen with and without the distinctive KAC Suppressor on the front, Notably when Kyle assists some Marines in clearing out a house (Note the zip tied suppressor on the front of his RRV).

The other accessories used are a Leupold M3 Mk4 with ARMs #22 high ring mounts and a Harris Bipod. The rails are partially covered using KAC Rail Covers.

The climax of Kyle’s tour is when confronting “Mustafa”, A sniper who may or may not have existed… Or more likely a consolidation of various snipers and marksmen (such as Juba/Joba) who operated in Iraq at that time. The rifle he uses to make that insane 1920m shot is the TAC 338A, A dedicated long range platform. The rifle is outfitted in a similar fashion to the SR25 with both a Harris Bipod and a Leupold Mk4 Scope.

In training, Kyle does use the Mk12, however it’s seen only by a couple of other SEALs whilst in deployment. It’s 5.56mm round wouldn’t have been suitable for many of the engagements Kyle found himself in, A larger round such as the .338 Lapua being a far better man stopper.

Kyle’s sidearm in the first half of the film is unusual in that it’s a non-issued weapon. However, this is actually taken from reality as Kyle used a Springfield TRP in .45 as his personal sidearm in his first tour before it was damaged by shrapnel, which prompted a change to a more modern design.

After the TRP was damaged, Kyle made a jump to the Sig Sauer P220 in .45acp. Most SEALs would have been armed with the P226 but it’s highly possible that if Kyle would be allowed a 1911 as a sidearm then a Sig, similar to the P226 but in .45 ACP wouldn’t be too far fetched. Many of the other SEALs in the movie also use the P220 but obviously spent all their cash on Dip, Dope and Beers as the holster of choice is the admin flap of their RRVs (Not a good option!).

So there you have it, a gear breakdown of a film that has split the opinions of airsofters. It’s certainly not a look I see replicated often on the field and there isn’t much reason why… The weapons are not the hardest to clone, Certainly the Mk18 Mod 0 which almost every manufacturer offers under various guises (The Tokyo Marui MWS CQBR GBBR being a good example). The clothing and tactical gear are also not hard to source, I’ve not worked out the entire cost but a passable impression would be around £200 all in were you to use repro gear such as Teesar or MFH and a second hand holster and rig, A few companies offer PACA repros or you could get a real beat up genuine one for about £100. The hardest/most expensive bits would be those finishing touches… the Charlie hat, the Saints and the looks of Chris Kyle/Bradley Cooper don’t come easily.

IMFDB – A vital resource for information on the weapons used in the film.

Propstore.com for much of the detail regarding the individual load bearing kit