I’ve used TAG products for a number of years, Firstly their quite frankly game changing Reapers and Arcangels which I’ve seen and used as great Force Multipliers against vehicles at themed games to later on embracing the more conventional hand grenades that although come in at a hefty priceTAG (lol) offer an experience that’ll get a pyromaniacs squishy bits twitching like a junkie on a comedown.

TAG Innovation hail from Russia, They’ve taken a look at Airsoft and realised that there was a gap in the market for realistic simulation fragmentation grenades. Following on from their success in manufacturing a launcher capable fragmentation grenade they quickly moved on to the R2BS design which incorporated a pin and spoon design into a flash bang shaped high density polyurethane foam body. 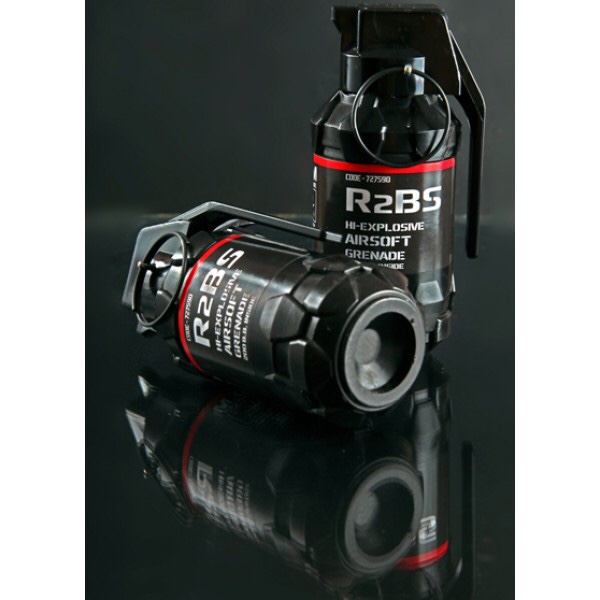 This proved successful in concept but the masses demanded something more akin to the size and shape of fragmentation grenades used by forces around the world… The M67 was the option most favoured due to its use with the US Military since the late 1960s, it also bears a striking resemblance to the Swiss produced HG85/L109A1 which is currently used by the Swiss, Dutch and UK Militaries.

TAG came up with a redesigned body shape for their M67 replica which they have called the TAG67, It mimics the design of the real steel grenade closely save for one or two little details.

Most importantly, or at least high up on the list of priorities it fits into practically all genuine frag pouches (seen below in a First Spear frag pouch)… No longer are we forced into cramming oversized TLSFX frags into smoke or admin pouches, or rooting through a pouch to find the Enola Gaye pea grenades have fallen apart under the rigours of an outdoor weekend in the wet.

I’m sure I’m not the only one this has happened to… Why a timed BFG similar to the Dynatec can’t be made to a similar looking design is beyond me… I’m certain it’d sell. And why hot pyro is often made in a shape so unsuited for replicating the use we want them for, TLSFX used to offer a great frag but our some unknown reason they redesigned their basic frag into an odd shaped and oversized design that quite frankly isn’t grenade shaped.

So with size out of the way… How does it work? Well the truth is that it functions pretty much as a real grenade does. You arm the grenade by pulling the pin, then whilst holding the spoon/lever you throw the grenade towards the unlucky recipient.

Once the spoon is released, it flys off and allows a sprung percussion detonator to ignite a short fuse (Roughly 3-4 seconds), once this fuse hits the main charge it causes the grenade to explode and with it send the highly compacted BBs out in a spray of high speed shrapnel. Much alike the Reaper I decided to rip apart a number of years ago… 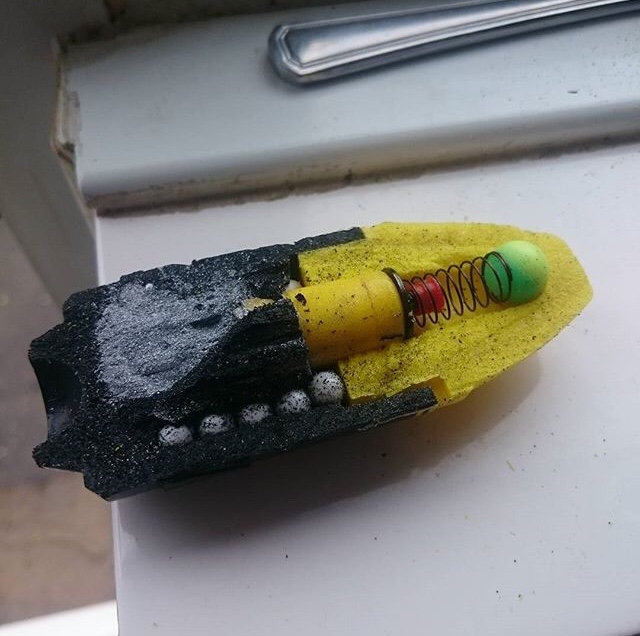 I’m not going to say the TAG67 is perfect… Far from it. It’s inherently expensive, buying from a UK retailer your looking at a unit cost of around £8.50 per frag and being a P1 Pyrotechnic Article your shipping choices are limited to specific couriers such as Tuffnells who charge a premium for hazardous goods, So buying in bulk can make financial sense if your budget allows… If it doesn’t, stop buying £8.50 grenades!!! No one takes pyro hits anyway!

The other major negative is that they’re not 100% reliable… I’ve had 8 boxes of these over a 3 year period and I’ve had 4-5 not go off. An expensive way to throw your money around and disappointing when you’ve committed to throwing an asset like that on a one way trip to glory. 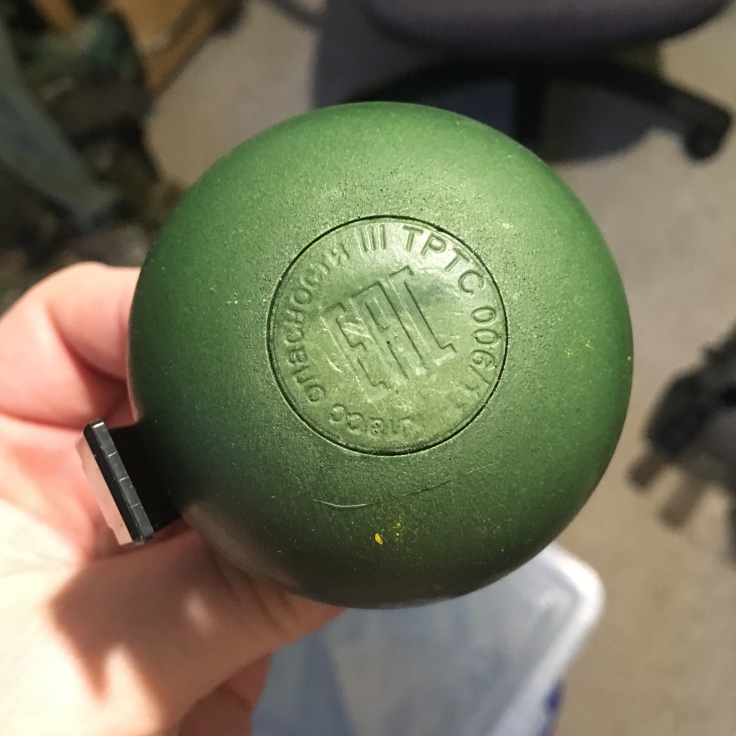 The construction is tough, a polyurethane foam body with a plastic fuse and spoon mechanism, the pin being a simple steel split pin and ring which handily clips into the body for safe carriage. A safety clip such as on the real M67 would have been nice but not wholly necessary in my experience. Also the weight is significantly lighter at Roughly 60 grams opposed to the 400 grams a real M67 weight in at… However it’s a relatively good weight for Airsoft as it allows a good range but without the obvious danger of throwing a heavy ball at someone.

The grenade is apparently packed with an equivalent charge to a Mk7 thunderflash, I can attest to this being above most walk on sites recommendations and as such it’s reserved for themed and Milsim game usage on my part.

Overall it’s an extravagance… But one that’ll make you cry and smile in equal measure every time you pull that pin out. Are they worth it? Well pyro is always overpriced… a mk5 at £2 retail is making the manufacturer over a quid fifty if you look at strictly the materials, the retailer generally makes 10% or so (which you can’t begrudge them for) so I’d argue that pyro in general is t worth what we pay.

For the discerning Russian loadout there’s also an RDG-5 style frag coming out very soon which should be around the same in performance and price. Either way, there’s an option to throw a realistic and highly amusing pyrotechnic for your particular loadout… I’m certainly looking at some RDG-5s for my OpFor loadout.