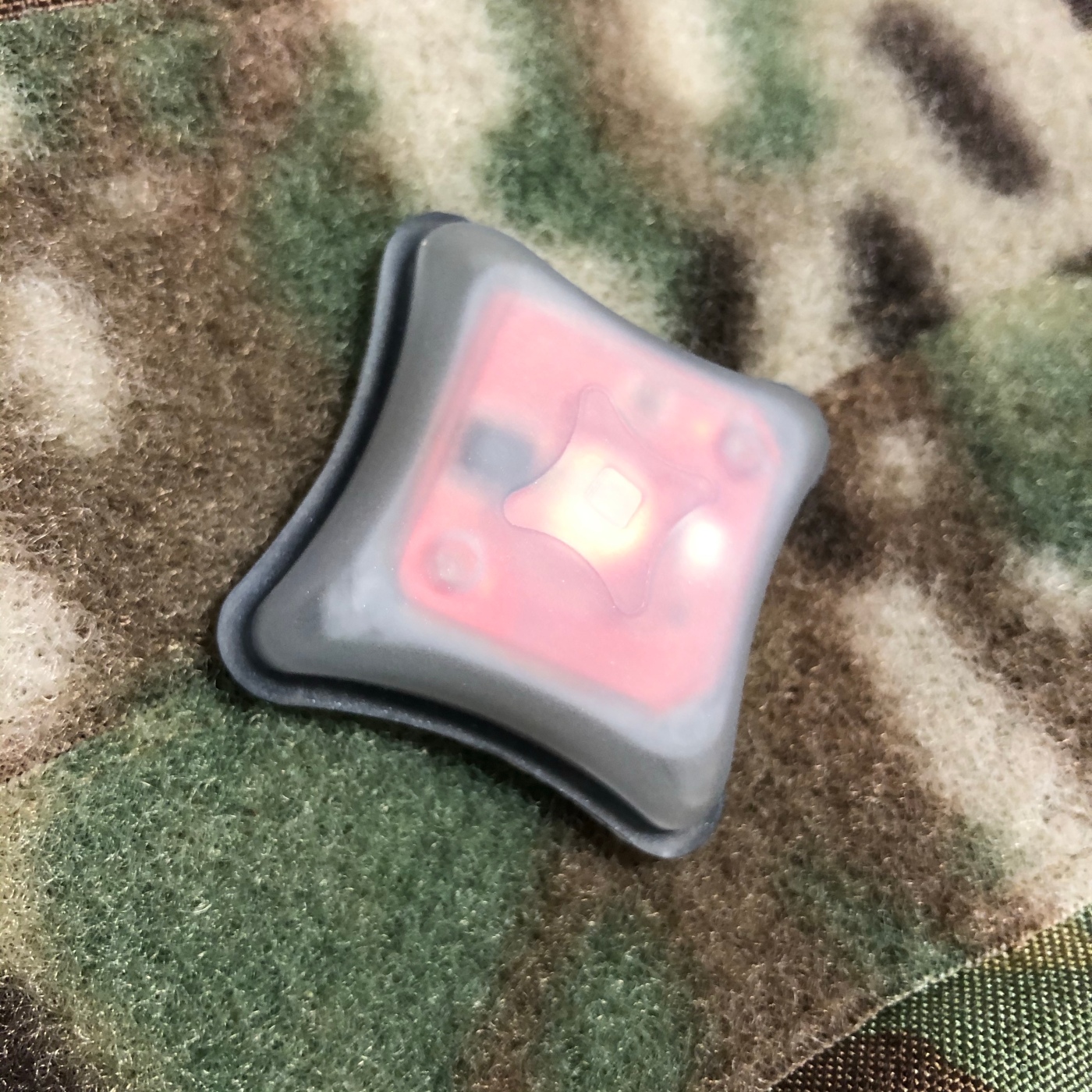 It’s small, it looks like a blob of something unsavoury and it’s technically a consumable.

It’s strange for sure, but is it useful?

I was given the chance to review this small, odd shaped light through the guys at Tactical Kit and whilst there are only a limited amount of uses for a light such as this, it’s the kind of thing you end up adding to your basket and justifying it later.

The form of the light is almost toy-like, a four pointed star being the easiest way to describe its shape. A constant curve around its edge and over its profile makes this surprisingly snag free.

Measuring a little over an inch and a half square and around half an inch thick, it’s a rather an inconspicuous object. Encapsulated within its own flexible, translucent silicone body, it relies on a non-rechargeable, non-replacable battery to provide 200+ hours of runtime.

It might seem ill-advised to buy something that is only useful for a set number of hours, but you have to put that into perspective, this light is not designed to stay on forever. There’s only a few reasons why you’d use up the 200+ hours in a short space of time, either you’ve left it on by mistake, or… You’re well and truly in the shit and that light is blinking away, signalling for help. Both are unlikely, but if it’s the latter, you’ll probably be glad you had this with you.

The light is backed by a sheet of incredibly grippy hook Velcro material, this enables you to place the light on virtually any item of tactical clothing or gear, I literally can’t remember the last time I bought something that didn’t have at least a 2” square of loop field on it.

Also included with the light is an adhesive backed section of loop Velcro field, this allows you to attach the light to other surfaces that may not have this built in. Items such as a helmet (my oldschool Pro-Tec is a prime example of a Velcro free lid), vehicles, storage boxes and a whole world of other goodies can now be marked up to help locate or identify priority items.

The light has two modes, a constant on and a pulsing flash. I wouldn’t go as far to say a strobe, but it’s bright. The light is bright enough to read a map by, although contour lines do tend to disappear if reading a map under red light, so I wouldn’t suggest it unless absolutely necessary.

The Spark is available in three colours, Red (as I’ve got), green and also IR. I’m not sure if the IR Spark is restricted by ITAR though, it doesn’t appear to be available outside of the US at present… A shame as I can think of a number of uses for an IR marker light.

The button requires a firm press to activate the light, one press for constant on, another for flash and a third to cycle it back off. There appears to be no memory, so no matter how long you leave it in any one state, it requires you to cycle through the modes in that same order to get to the mode you require. Not to everyone’s taste, but simple rarely breaks.

Overall, it’s something that’s rather useful to have around “just in case”. I keep it on my day to day bag, awaiting that magic moment it finally finds a use… “Just in case what?” you might ask; Who knows? but I like having a light on me at all times and adding another one that I barely register being there is an easy decision for me to make.

Can I recommend it? Well, if you’re a sucker for cool little gadgets like I am, it’s an easy sell. Unity Tactical offer a number of solutions to niche problems, much like S&S Precision. However, Unity’s solutions have always felt a little better thought out and certainly when comparing this to an old S&S V-Lite, it feels a much more versatile product. I can see this light becoming one of those little items we start to see more and more of out in the wild, and as such it’ll appeal more and more to airsofters, even if only as a “dead man’s light”.

If you’re anything like me, you probably find yourself trawling through the lists on Tactical Kit, trying to find those useful little things that make paying the postage worthwhile after finding a bit of kit you want. This is most certainly one of those things that’s easy to add to your basket… You might not need it, but that’s never really the point, is it?