I’ll start with a little disclaimer… Some of what I’ll be writing is speculation, certainly when looking at prices, dates and detailed specification. That being said, There’s a significant amount of information that’s been released so far, Hyperdouraku being a highly reliable source for information and Impulse101 also having a vested interest in bringing their customers as much information as possible.

Spring airsoft is where I started, Many many years ago… I’ve no doubt that many of you will have also owned a number of spring replicas in the past. Now it’s easy for many people, Certainly those who have joined the Airsoft world in the last 10 years or so to simply see Airsoft and skirmishing/Milsim as one entity.

I’ll probably ruffle a few feathers by Sharing my thoughts that Tokyo Marui in particular are not entirely interested in force on force, certainly in the days I began collecting replicas as a teenager the emphasis was that Marui built a replica firearm with moving parts, limited functionality (such as removable magazines) and the fact they fired a plastic ball at all was merely an afterthought, It certainly seemed so.

Sure… plinking was fun, Adding a few people into the mix and running around a farmyard blasting each other led very quickly to buying ridiculously expensive replica firearms, military grade night vision and tactical gear and hunting “poors”.

So, the spring releases look like an all black version of the Ruger KP85 that Marui have already had a silver springer version of for longer than some airsofters have been alive! Added to this is a long overdue Colt Double Eagle, An odd choice… Not a popular handgun as the old and bold preferred their Colt’s in a single action flavour and the double action crowd were already reaching for their Sigs and Berettas. A revised Glock 17 and Heckler and Kock USP with silver slides complete the line up of spring powered “auto” handguns. 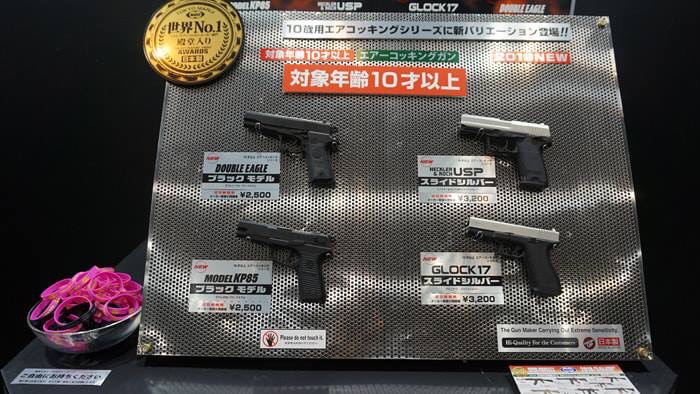 The other potential springers (or possible gas additions, although unlikely due to the low cost) are a pair of pythons… Colt Python PPC’s (Either a nod to some of the custom pythons made by bespoke gunsmiths or the practical police course that these wheel guns get used on), One in black and the other in a nickel finish. Nice enough to look at but surely a Mateba Unica 6 would have been a more interesting project?

Next up… the AEP HK45… not sure why this is even a thing, I’ve owned the GBB HK45 and it’s a superb performer in all weathers… An AEP doesn’t offer anything that isn’t already offered in more suitable replicas such as the Glock 18 and Beretta 93R.

Next up… The Hi-Cappa D.O.S. (Direct Optics Ready) Which appears to be an incremental update of the Hi-Cappa platform allowing for Tokyo Marui’s lightweight Micro Pro red dot sight to be directly mounted. 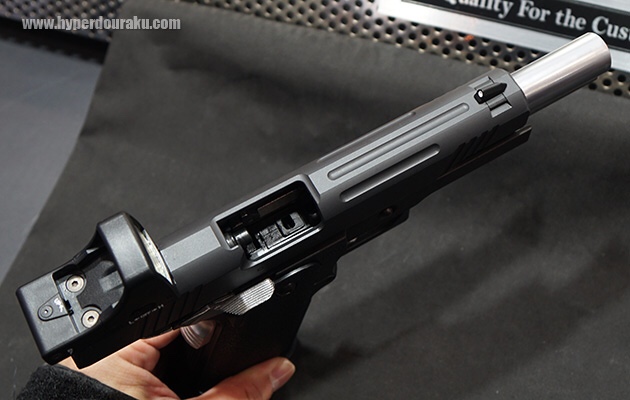 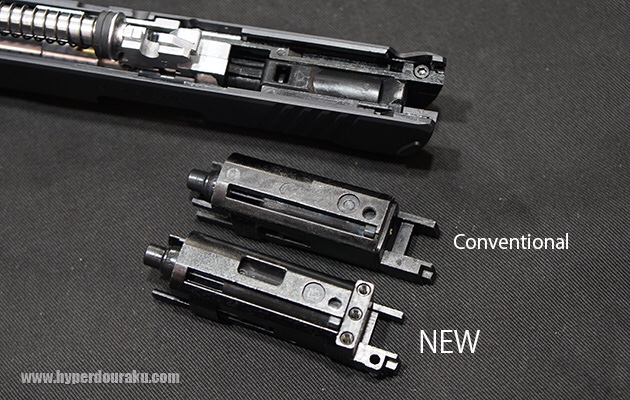 The only worry being that the cylinder looks to be of the less deep design a-la the M&P9L so it might result in a lesser performance.

The Springfield V10 ultra compact, An interesting model… it looks to be based upon the newer, improved internal design that serves the M45A1 CQBP.

If this is the case (And based upon pictures of the magazine and cylinder it appears to be) then I’d suggest this could be one snappy little performer!

The unsurprising addition is a black HK45 Tactical… An HK45c would have kept the DEVGRU fanboys happy but with a reasonable SIG and a very good Glock 19 replica available it’s not causing too many people to lose their minds. The black “Tactical” is certainly more appealing to me than the FDE version but with a brace of pistols in my current armoury I’m not going to rush out and buy this one. 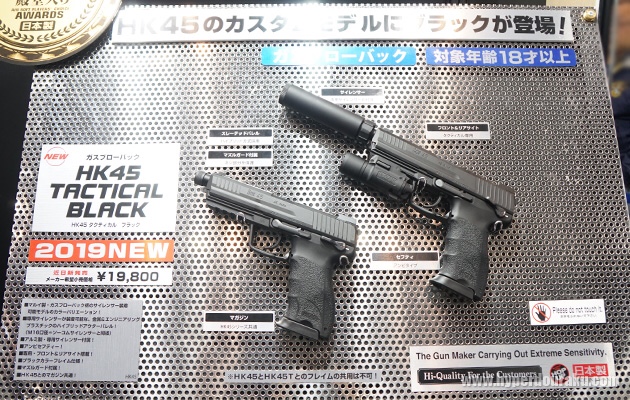 So, Before we move onto the meat of why we’re here, one final flight of fancy… Well it’s certainly what’s on the mind of at least one Marui designer! This little beast isn’t given much screen time or coverage but it’s definitely an interesting development… The “Vorpal Bunny“, no doubt in some way a part of an anime series where 12 year old school girls battle demons shaped like businessmen trying to steal their knickers. An unusual design, based around a compact 1911 chassis but strangely appealing.

The AK47… One of those iconic replicas I’ve owned a few of. Tokyo Marui finally releasing a recoil shock version of the classic AK47 last year, An update of the older recoil shock AKs which although fantastic and under-rated (my old AK102 was a really fun replica to shoot) didn’t offer the features you’d get in an M4 or 416. The Gen 3 AK47 fixed this…

And now it’s available in the AKS47 variant… Something I’m in two minds about. It’s good that Marui are offering this popular option but I’m concerned it won’t have the solid feel that some other replicas have… My Cyma CM.048S being one of the more solid AKs (steel receiver and stock, wooden furniture, aluminium elsewhere) and coming in at a cost of around £120. But we shall see… I’ve yet to see more than one Gen 3 AK out on the field so I’ll be looking forward to having a go with one and the initial picture look like they’re taking the strength issues seriously. 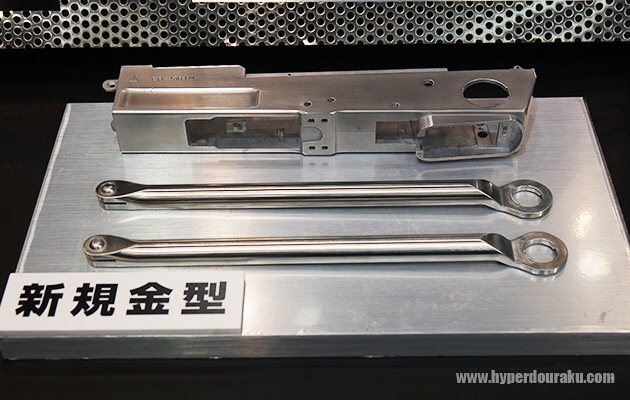 The second most anticipated replica is undoubtedly the FNX45… already several years behind the Cybergun version it’ll have some work to do in terms of knocking off the tried and tested licenced model from its throne.

However it’s Marui so it’s performance is virtually assured, Looking at the pics it appears incredibly well detailed and built with the slide built from a suitably lighter colour polymer to replicate the real deal firearm.

I’m certainly tempted by this… It’s a fully ambidextrous pistol that features in Day Z and ARMA 3 so yeah… Certainly something that ticks a few boxes but at the same time, the funds will only stretch so far and there are other, more pressing things on my mind.

So what are you still doing here? Why read through all the other crap? Let’s not beat around the bush… Marui have done what they have said they’d never do and have developed a support gun. It’s odd that they’ve never built one before, not even in the older (pre-recoil) days you’d have expected a 249 or M60 to have come out, But here we are in the tail end of 2018 and Marui are looking to release a Mk46 Mod 0, In true Marui “Slightly off kilter” fashion they’ve opted for the Mod 0 as opposed to the more commonly seen Mod 1 with para style stock. 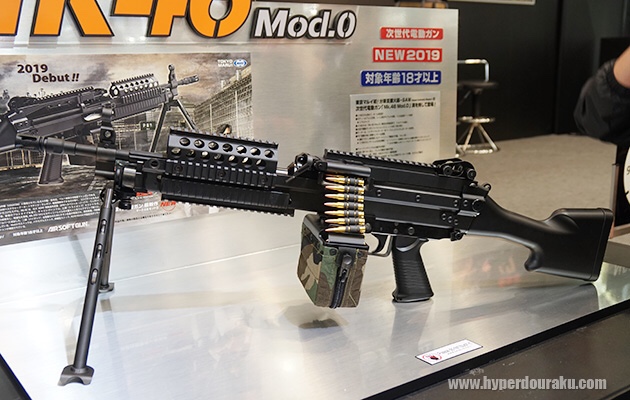 Odd, but probably for good reason. That stock could house the mother of all battery packs or the recoil unit itself… However it’s been suggested that the battery will be housed under the barrel inside the gas-tube. Unlikely but it would certainly provide enough space for a small long LiPo cell and pave the way for a Mod 1 stock.

The other features that are suggested are safety features preventing the Mk46 during whilst the feed tray and cover are in the open position and also a stop on empty function which is something hitherto unseen on support weapons.

The recoil weight is apparently around double that of other recoils, around 600g and the power coming from a high torque motor driving a newly designed recoil engine… Id imagine in a similar shape to the SCAR-L/H recoils but until they become available it’s anyone’s guess.

My major points of concern are in durability… More recoil and a system that’s meant to be used in a sustained fire role could mean parts wearing out rather quickly. Also the body itself… the Bipod on your typical Airsoft replica isn’t something that stands up to much abuse… If I can’t shove my support weapon ahead of me and dump myself prone on the ground it’ll make for a less than perfect experience. I don’t worry about chucking my Block 2 on the floor all that much, with a little care and not expecting miracles you’d be surprised the amount of abuse they’ll put up with.

The magazine is another item of interest… A “nutsack” design holding around 1000 shots in M81 woodland fabric… Very cool. The feeding is something that’s central the the operation of the replica… this design apparently working independently with the aid of 4 AAA batteries, likely a high cap design with the motor keeping a stream of shots under tension as opposed to a noise activated design. 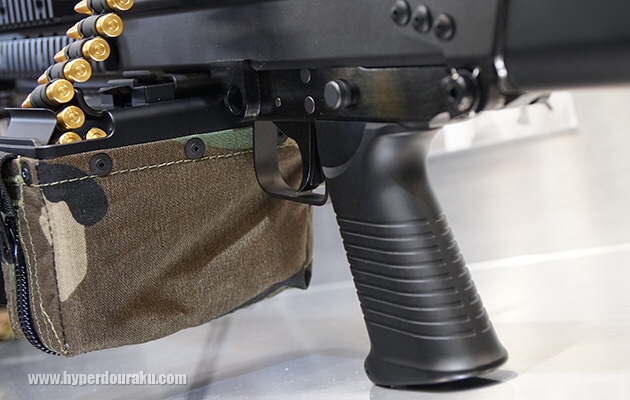 Onto the important stuff… Price and release date… Hyperdouraku reckon a price in excess of ¥100’000 which equates to £690. Add in the obligatory 20% for the crown and you get a figure just north of £825. So here’s the moment we all close our eyes, pray and recite the following mantra “Please UK retailers, Don’t take the fucking piss” and “Thanks to Brexit, I can afford the gun or ammo but not both”. Postage direct from japan will be pricey, having spoken to a couple of UK retailers they’re expecting their first shipments to be around £40 per unit more expensive if they use airmail (Which obviously they’ll do as they want to compete for “first in country” bragging rights).

The other thing we all want to know? Release date… Well who knows. The Glock was first shown around 24 months prior to its actual release, However Marui have advertised it for a 2019 release date. My guess would be a late spring release around May… with that in mind and an estimated cost of £850 you have to look at saving £5.15 per day which isn’t actually that hard to do if you have the willpower to accept a couple of hours a week overtime and cut back on the Starbucks.

I’ll be looking to grab a Mk46… I have a burning desire to live out my Sonny Quinn fantasies, A Mod 0 will suffice until a para stock is made available and besides, Who wouldn’t want a recoil engine support weapon… especially one that sounds as good as this!