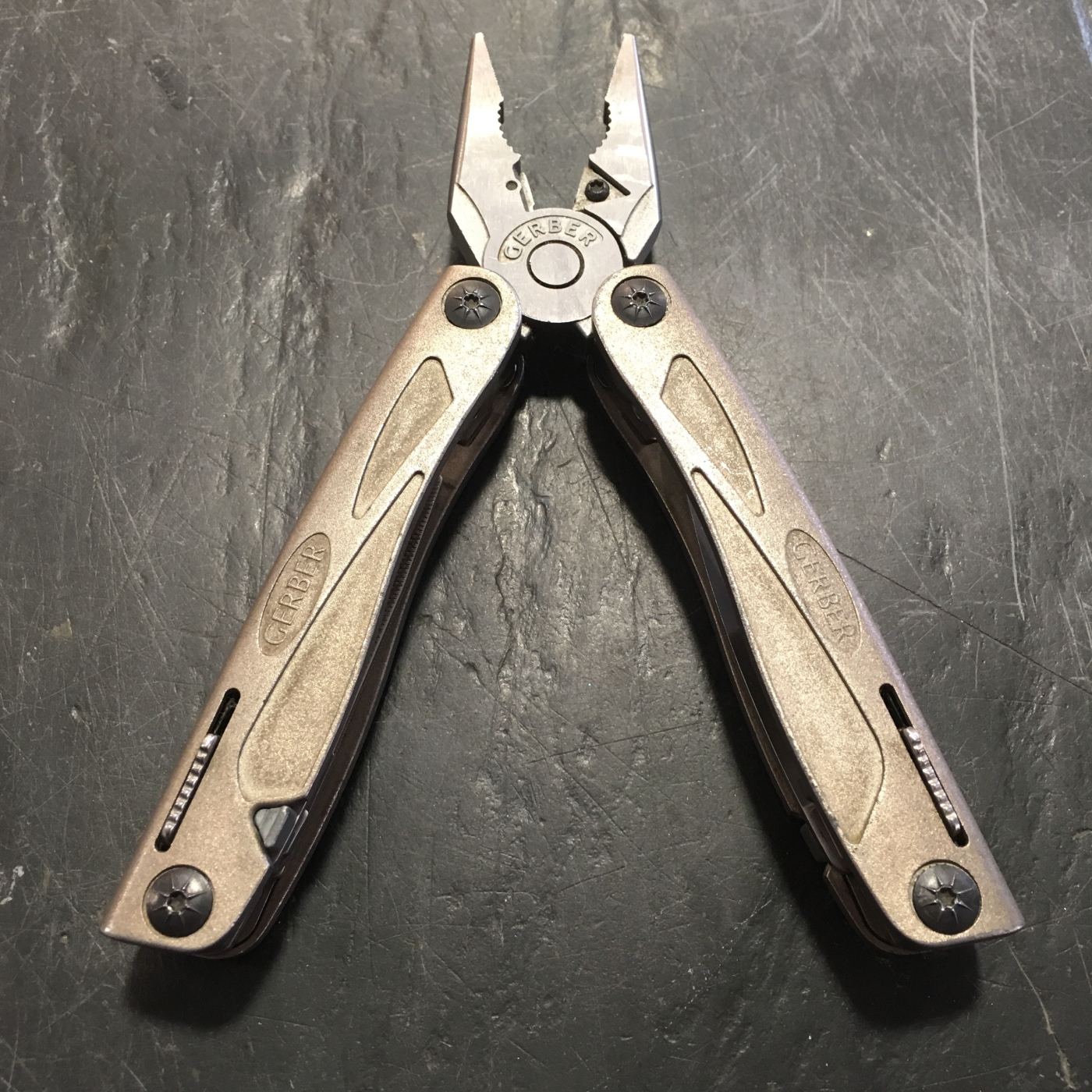 Everyone should own a multi tool… whether it’s a Leatherman, Victorinox, SOG, Gerber or even a cheapie Chinese folding set of pliers. However… Reading 127 hours has taught me that sawing through your arm with a blunt knife to save yourself is probably making things a little harder than they need to be. 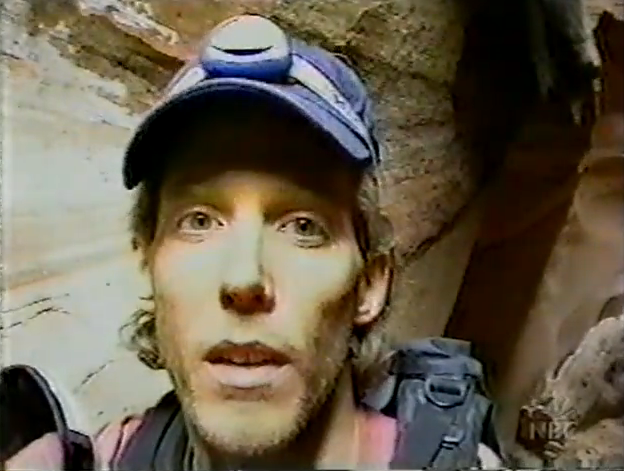 Shortly after meeting my wife, She asked me what I wanted for my birthday. Being a cheeky fucker I asked for a Gerber multitool, I guess she must have figured I was a keeper as on my birthday she presented me with a brand new Gerber MP800 Legend. It’s been with me ever since as part of either my Car or EDC kit. 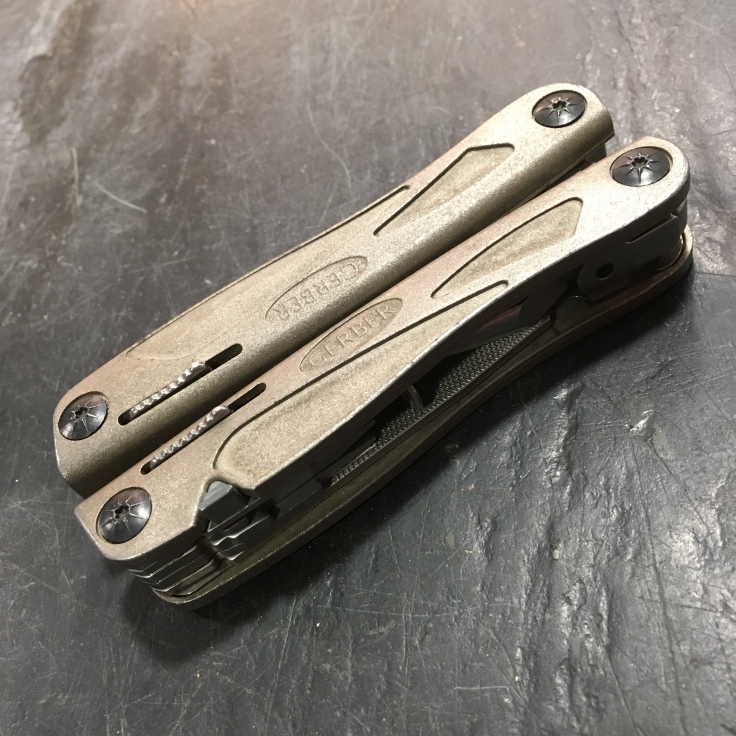 Well obviously I married her… And 9 years later the Gerber is still going strong… The marriage is holding up alright as well 🤣. It’s the only thing I’ve taken to every game without fail and despite being rarely used within Airsoft, When it is used it does the job to a more than acceptable standard.

So let’s move onto the tool itself, And why I wanted a Gerber tool. In a market that’s pretty much synonymous with Leatherman, why choose anything else? Well for one, Gerber was at that point in time, the tool of choice for many within the US military. An overly rugged design and featuring tools and particular features that made it appeal to me over the other tools on the market.

Primarily it’s the Pliers I wanted when I bought the tool. Rugged and packed with enough features to make any task I’d have that little bit easier. Aside from the obvious uses of the jaws, The MP800 also comes equipped with replaceable carbide cutter inserts inside the jaws which are incredibly effective at cutting high tensile “Piano” wire such as that on AEG springs.

The pliers are also sprung loaded, this makes fiddly jobs that much easier… Often when using a multitool your short of hands so the ability to manipulate this one handed is a bonus. 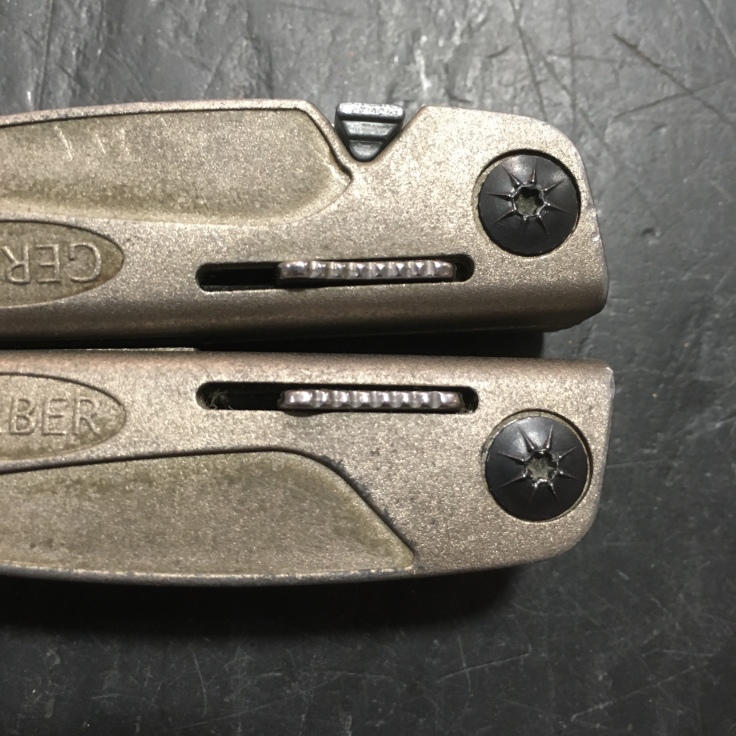 Whilst on the subject of one handed use, The main blade and scissors also have a built in thumb catch for easy opening. Most of the other tools have a nail catch to aid in their opening… Although with some it’s trickier than others.

All the tools (Bar the pliers) are accessed from the outside of the tool, This makes life a fair amount easier when you simply want to cut open some packaging. Another massive benefit is that all the tools can be locked open, Certainly a good safety aspect as far as the knife goes but also rather useful when using something as simple as a screwdriver. To unlock the tools, Simply slide the release rearwards (Much alike the slide release on a Glock)

Onto the tools, The main one most people will be concerned with is the blade. The Gerber has a 2.5″ curved drop-point blade with a scalloped serration on the inner blade edge, Pretty much a jack of all trades and useful in a pinch for everything from packaging removal to whittling and trimming and even food prep if nothing else is available to do the job. 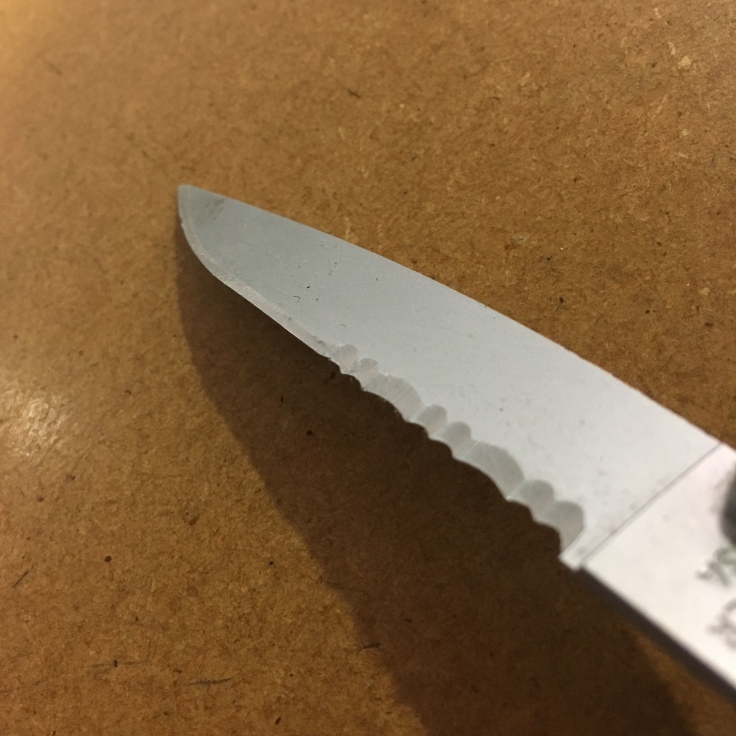 I’m personally not a fan of the blade profile, I’ve always preferred a Tanto profile as it’s idiot proof but despite my nature to ask tools to do something they shouldn’t be used for I’ve only managed to slightly chop the blade near the tip. I could probably grind it out but it’s kept its edge so well I’m hesitant to touch it. The blade is a pretty aggressive profile, and hasn’t needed any attention to keep its edge. I’ve given it the occasional light once over with a sharpener but it’s never really needed anything serious.

Next to the blade is probably the other most used tool overall, A Phillips screwdriver that is unremarkable yet damn strong. Not really much to say about this other than it works well in a pinch and certainly better than most multitools (due to its locking benefit) but it’s certainly not going to be picked up over a normal screwdriver. 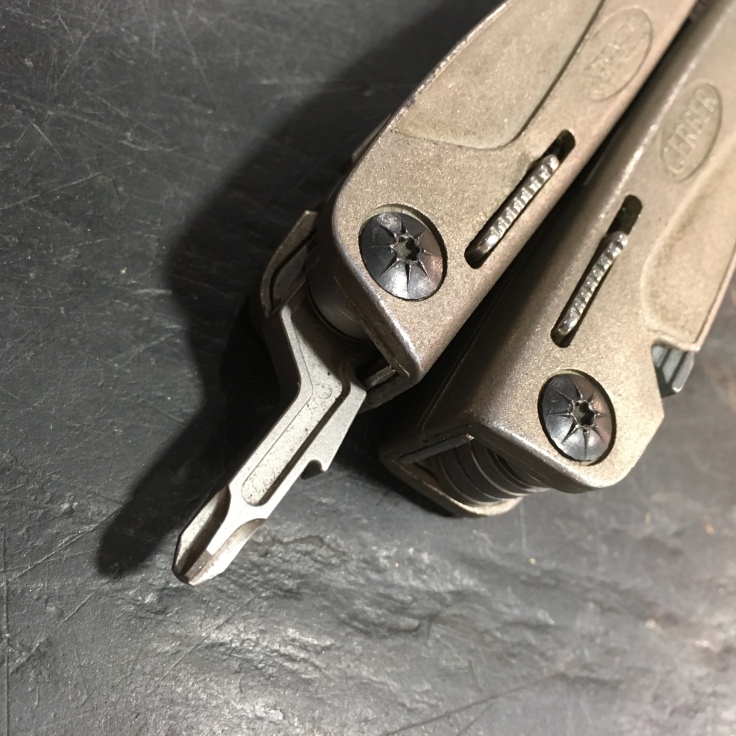 In addition to the Phillips, There are three flat blade drivers within the tool. Again, nothing special about these save for their locking function but I will say that they are remarkably durable.

The larger driver has been often (inappropriately) used as a pry-bar for paint tins etc and for pulling out nails etc. It’s done more than I really should have asked it to and not once shown any signs of weakness.

The second size down also contains a bottle opener… Strangely enough they didn’t include a can opener but due to the brute strength of the tool I’ve used the bottle opener to open cans on more than one occasion (from memory this is why there are surface scratches on this particular tool). 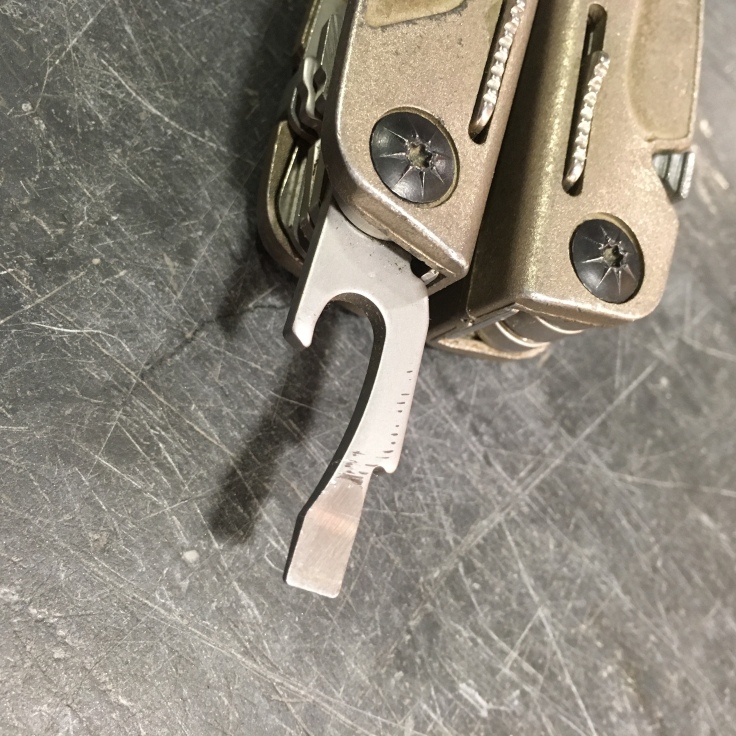 The smallest driver is probably my least used tool although I’d not be without it. It’s thin profile has helped on occasion when prying apart remote controls etc and is a perfect fit on many smaller screws and bolts.

The File is a double sided “mill” profile with one side having a single cut and the other a double cut.

Useful enough for removing large burrs from metal or plastic, Also if nothing else served better you can use this for rounding off broken toe nails etc when out larping.

Scissors are something I have a love/hate relationship with… On the one hand they’re fantastic at certain jobs such as cutting wire and thick material, This is owed largely to their Fiskars design.

Fiskars are the parent company of Gerber and are an interesting company in their own right. I’ll not bore you to death in the details but Wikipedia has an interesting page on their history. The scissors can be challenging to cut fabric and paper neatly… They are squat in shape and tend to be an acquired taste to use. I much prefer the more slim design of my Victorinox tools but for certain applications these are very good. 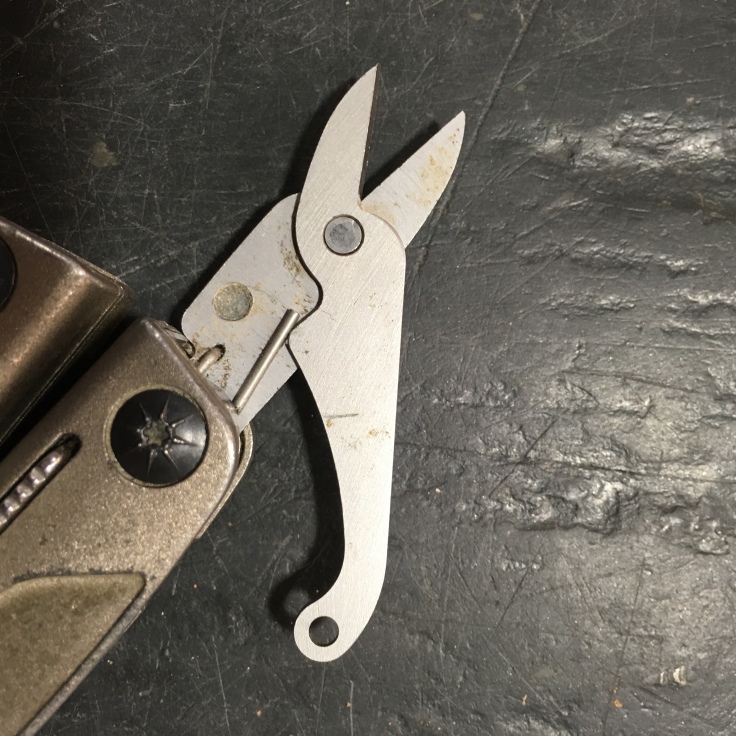 Finally… The second replaceable element of the tool is the jigsaw blade that first drew me to the Gerber design. It comes included with a Remgrit GJ4 blade, perfect for ceramic and stone.

An odd choice but perfect if you happen to need something capable of cutting Fibreglass, Plastic or Tiles. It’ll actually cope admirably with most materials except for wood which tends to gum up the carbide grit blade. Spare blades fit using a frustratingly hard to find U-shank with hole attachment but Ebay will pull up enough choices to find a suitable blade.

Overall, an incredibly tough and durable design. the rubberised grips that came with the tool soon wore off but it’s plenty grippy enough without them. I’d certainly recommend this tool over many others, Although as with anything it’s very much about finding what works best for you. For certain tasks I’ll use my Victorinox Swiss Champ or even the small Classic I have on my keys.

The other point to make is that it’s a bulky tool… It fits snugly inside a double stack pistol pouch but some pouches such as the Blue Force Gear Whisper Helium pouches can be rather tight to remove the tool in a hurry. And for those with small hands you might struggle to get the tool to fit comfortably as the handle width when used as pliers is quite a gap. However, A multitool isn’t meant to be the best tool for the job, Simply the one you always have with you. There’s always a better tool out there for a task but making sure your multitool is a relative jack of all trades and able to push outside its comfort zone will make sure that along with some creative thinking and the worlds supply of duct tape, Zip ties and oil your able to fix virtually anything under the sun.